Trying to find a good scope for a reasonable price

Trying to find a good scope for a reasonable price

I've asked about this before, but nothing ever worked out.

I would like to buy a spotting scope, useful for 25 and 50 yards, that would preferably come with a clamp-on bracket more or less like this home-made one I photographed this morning.  It should work well for 22, as well as 38 and 45, and if it does those well, I'm sure it will be fine for black powder. 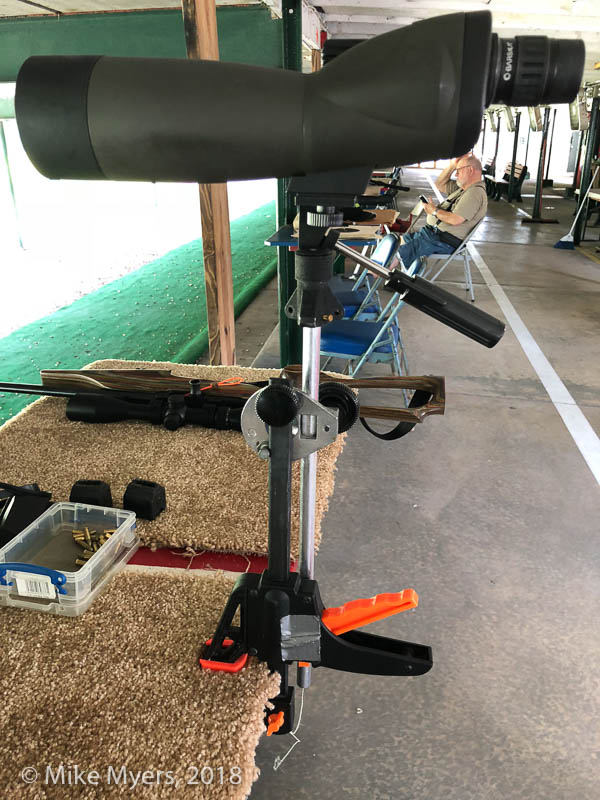 In the past, I wanted one that could attach to my shooting box, which I never got because even if I could find one that would fit into my tiny Mazda's trunk, that wouldn't leave room for other stuff.  I'm doing find bringing my shooting bag, a box with tools, and a "box" with my gun.

I need it most for shooting 22, but if it works for that, it will work for/with anything else I shoot.

I don't want to save money by buying junk, but neither do I want to spend hundreds of dollars to buy something a World Champion shooter might want to own.

If need be, I guess I could settle for a tripod mount, but a clamp on the bench top seems like a better way to mount it for me.  I'll look for a good photo that shows my shooting area.  I don't mind spending more money to get something better, but several hundreds of dollars is way more than I plan to spend.


Oh, and if someone here wants to move up to something better, and sell me your current scope, please let me know.

B&H shipping is great - not only is it free, the scope arrived on Tuesday while I was off at the range making lots of smoke.

It isn't tiny, but it's light.  It feels like a plastic device with glass at either end.  It weighs half of what it looks like it should weigh.  The included tripod feels sturdy - I expected it to be a toy, soon to be replaced, but I have no complaints.

That same afternoon I set it up on my camera tripod, and aimed it out my balcony window, just to get a feel for what it's like.  I held my iPhone over it, and snapped three photos - with a proper mount, they would be right-side-up and sharper, but this was just to get an idea of what it could do.

This is shooting out my balcony window with my iPhone.  There is a tiny white building under the three loading cranes at the left.  That's what I used for my target. 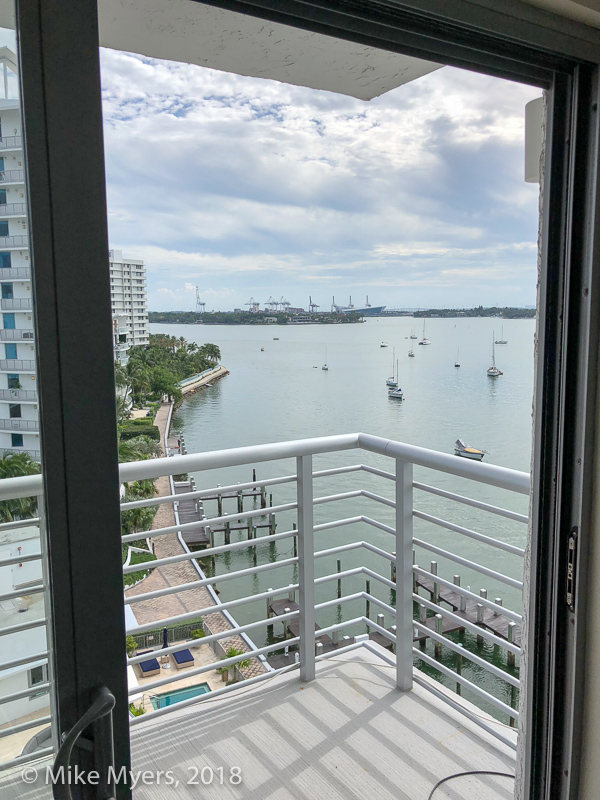 This is the same photo as the previous one, but cropped in my computer to show the building I was going to view through the scope. 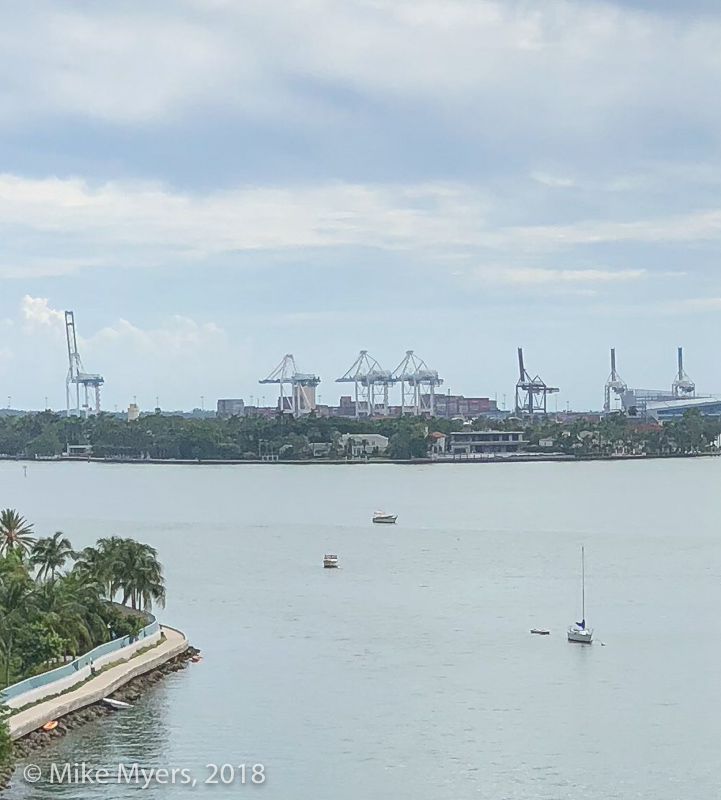 This is that white building, viewed at 20X power.  The phone was just being held in my hand - the view is sharper when I look through the scope. 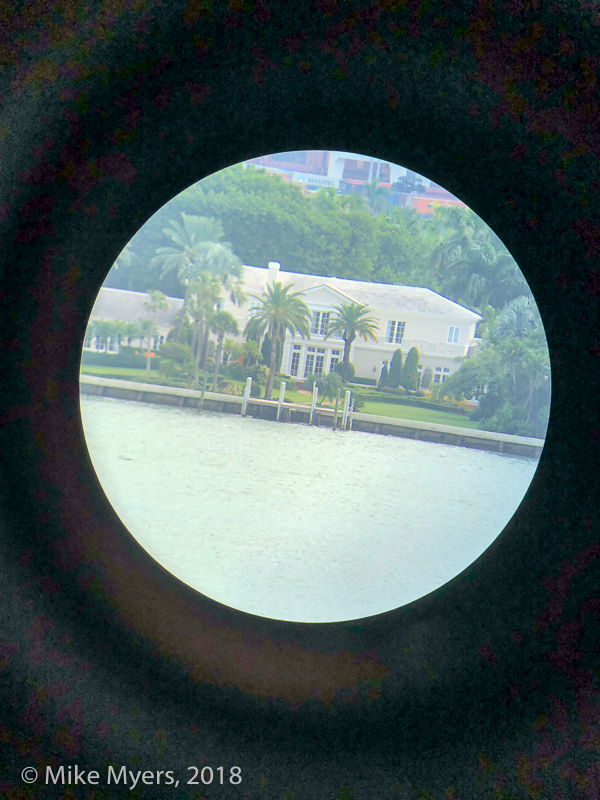 Finally, this is the same building, viewed at 60X.  It was more difficult to hold everything steady, and centered. 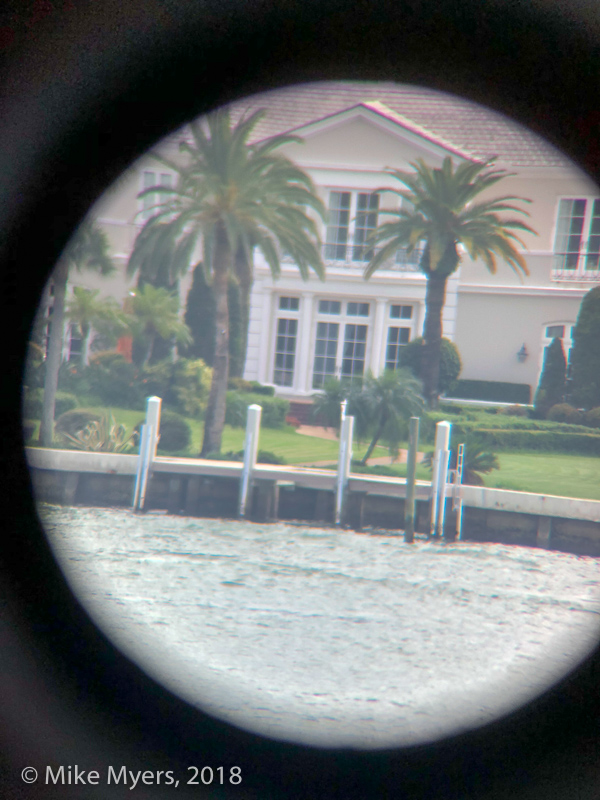 Next step is to go the range and shoot targets at 25 and 50 yards.  I may be able to do that later this week; if not, I'll do it in two weeks.

I guess I might get a proper camera mount, or adapt my microscope camera to fit on it.

Maybe you guys can suggest if this seems to be useful for Bullseye shooting.  I think it will do what I wanted it for, and a whole lot more once I get a camera mount.

Final post.  I got to use the scope two times.  On the first day it took forever just to figure out where it was aimed.  The second time this was easy.

With a B-8 target at 25 yards, and the zoom set for the middle of the zoom range, the scope covers the 8-ring.  Zooming in or out is easy, to see just what I want.  After focusing, the holes are huge, so easy to see.  This is with my eyeglasses on.  Taking a photo with my phone was impossible, as I left the protective cover on the scope.  I need to either remove it, or use a rubber band or something to move it out of the way long enough to rest my iPhone on the eyepiece.

The tripod is adequate.  It's stable, and while the scope can be wobbled around, it comes back to where I set it.

I found the easiest way to aim it right/left was to move one of the tripod feet slightly.

LenV wrote:For my .02 I think these compact spotting scopes by Burris were one of the best scopes for Bullseye ever made. I have one for every box I own that they will fit in. I said it like that because they are just a tiny bit large for old Pachmyer boxes. Good lens and easy to focus. As long as were all giving opinions. I have seen them sell on Ebay for anywhere between 30.00 and 150.00. They also come in a fixed power model but this model is my choice.

This was my preferred scope as well, but the lens holder bolt came loose from mine so the image would shift by about 1/3 of the lens when you went to focus.  I sent it back to burris and they sent a replacement the same day they received it. unfortunately this one is discontinued so they sent me the next best thing... an XTs 2575. it's an 80mm objective and weighs about 30 lbs... not appropriate for a BE box... it's a $300 scope, and I now need to sell it to try to fund a more reasonable one...