It seems that the best guns can shoot 1/2 inch good at 50 yards with 22, but other handgun calibers can shoot maybe 1.5 inches. Is this because it's rimfire rather than a centerfire primer? Why isn't there a larger caliber that's accurate?

My barrel tester is a copy of one made by a friend in the early 1970's.

We were told by a reputable Marine Corps 2650+ shooter that they, the Marine Corps Armorers rejected several barrels as "not accurate enough" prior to installing them in pistols.

So we, poor civilians that cannot afford the luxury of selecting the "best of ten", decided to build a fixture to test our existing barrels to see just how bad they were.

Initial tests with hand loads were a "Chef's Surprise". All over the repair center. Then we gleaned some quality wadcutter ammo from a Military shooter. Surprise!!! It fired X-ring groups from most all of our barrels with the exception of one. This barrel was re-crowned on a lathe and retested resulting in X-ring groups.

What we learned was this....

1) Most any 45 ACP 1911 barrel machined to drawing specifications would shoot well.

2) Barrels made to National Match specifications that had excess material for fitting were much easier to install than welding up factory Colt barrels. For years, Jim Clark Sr. used welded up Colt factory barrels. At Camp Perry, I asked him why. "They shoot just fine" was the reply.

3) It was the quality of the ammunition, not the barrel, that was the deciding factor.

4) Factoring in the accumulated tolerances of a new gun build resulted in groups about 1/2" larger than those fired in the barrel via the barrel tester. If the pistol did not shoot well and the ammo/barrel tested fine, it was back to work sorting out what was wrong in the build.

We still call the device the "barrel tester" where in reality it is an ammo tester. 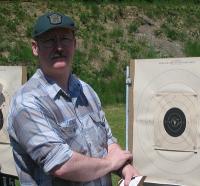 Clark sold a ton of those Colt barrels at Perry every year.. yes they shot well.. think they were $50 and he would sell out quickly