Just saw this was released at SHOT show and looks interesting. Huge objective at 34mm but a bit shorter looking than the 9000SC. Also a bit lighter, says under 7 ounces. They also say it has a 1moa dot but I would imagine looks closer to 2moa especially when turned up. Who wants to be the guinea pig.

I saw it but the 1moa was a turn off. "Looks closer to 2moa" is unfounded even though it may be true.

I agree the 1moa is more wishful thinking. The Sightron S-30 is advertised as 5moa but is really 2moa. I've never even heard of a red dot that is a true 1moa. I'm curious what it actually looks like.

The objective lens is probably closer to 40-45 mm. The tube is 34. They don't supply rings for the scope but state that any 34mm rings will fit. There are not a lot of choices for 34mm rings. That said if I can find rings I might get one of these. They come in 2 versions. The one with BDC is about 100.00 more then the plain model.

BDC would be nearly worthless on a bullseye pistol unless you paid them to make a custom cap for you.

lots of options for a 34mm ring set

not cheap but a lot of optoins

Probably not light either.

I had the opportunity to take a look at the new leupold dot at the shot show. Of course they had them mounted to an ar, so it was more difficult to evaluate, but my first impressions are VERY positive.

The goods:
1) Close to the length and weightof an ultradot but still larger. MUCH smaller than the 9000.
2) Power switch is the leupold button on the battery cover on the left side of the body. Each push increases brightness untill it's max setting where it blinks to let you know it's there. Then subsiquent button pushes reduce it untill it's lowest where it blinks again. Might take a bit more time to adjust up and down on the line, but you can push the button pretty quick.
3) adjustment turrets are finger turn and had pretty positive clicks. The model I played with had a resettable stop to zero the elevation scale. Nice feature, but I'd probably just throw the turret caps away and do it the old fashion way.
4) optics are clear, but no way is it a 1 moa dot. It's at least 2, possible larger.
5) msp was said to be between $200 and 300 so it looks like a nice price point.

The bads.
1) the dot quality to me is not as clean as aimpoint or ultradots, but, I do have astigmatism so that may have played a role as well. None of my dots look as good as they used to.
2) no threads on the front. Just a stupid step funnel thing that the guy couldn't explain... the rear is threaded and the lens is set in relativly deeply.

Overall,  it's an optic that I think should be considered seriously. If I hadn't just bought an aimpoint, I'd be ordering one when they release arround march.

2019-01-24 14.40.04.jpg Elevation knob on higher cost scope. It is resettable once zero is establishedYou don't have permission to download attachments.(289 Kb) Downloaded 1 times

Well one think I notice that I don't love is that even though the OD of the tube is 34mm it doesn't appear they really took full advantage of it with the viewable. Like looking above it almost looks like the 9000SC has a bigger viewable diameter.

34 mm is bigger than we need but if there are any low rings available this could be a nice little pistol sight!

zanemoseley wrote:Well one think I notice that I don't love is that even though the OD of the tube is 34mm it doesn't appear they really took full advantage of it with the viewable. Like looking above it almost looks like the 9000SC has a bigger viewable diameter.

I concur... When I saw it I asked the guy what the heck were they thinking?  he didnt have any answer...

I read that the MSRP was closer to $400. Also, I have an astigmatism and it is very hard to evaluate dot size and quality. When I turn the intensity of my Aimpoint down, the astigmatism effects, little comet tails, seem to get much smaller. Also, the dot appears to be smaller as the dot brightness decreases.

I may have to re-think buying one of these. I already have a Sightron S33-4R sitting in my safe doing nothing because it is too big. It only weighs 6.2 oz and they use the full tube for optics. It came with good rings too. I think that Leupold would be great on an AR platform. I will let someone else be first tester...

The more I think about it there is already a scope on the market that does more/offers more then the Leupold. The Matchdot 6 by Ultradot has all the features of the BDC model and sells new for about 275.00.

5. Uses all of the tube for lens/light gathering

6. Has no image reduction in this series 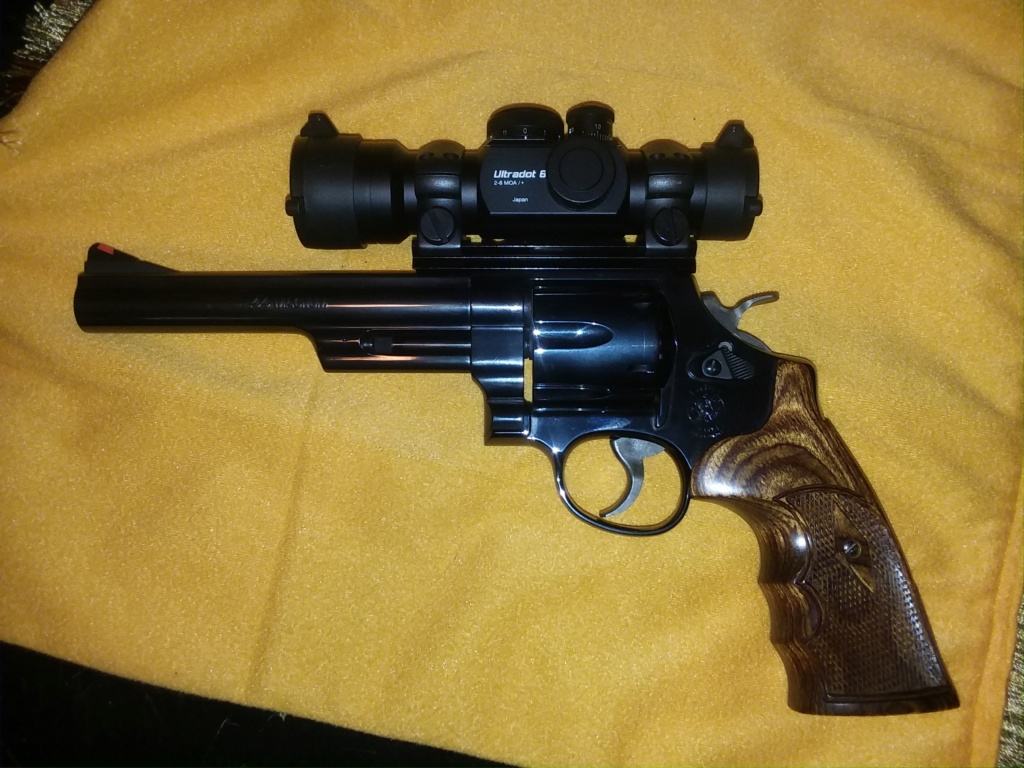 Looking at the comparison photo of the VX and Deltapoint Pro the VX looks massive.  I've been using the Deltapoint Pro 2.5 moa for a while now, I also own Aimpoint H1s and Ultradot Micros but prefer the Deltapoint for a couple of reasons.  First is the smaller size and weight, some of the tube types(Aimpoint 9000 and others) look like you've mounted a bazooka on top of a pistol.  Secondly I have astigmatism as some others here have mentioned, and with the Deltapoint I see the dot as a dot no comet trails.  I find with my everyday progressive lens glasses I really see the dot as a dot or with my iron sight glasses it's a little more of a triangle, either way it's better.  If you have an astigmatism take a look through a Deltapoint and see if it looks better.  I've also come up with a sun shade/rain umbrella for it that is really easy and cheap to do.  Haven't actually shot in the rain with it yet though.