Hi,
In another thread, Len shares his concerns about loading jacketed bullets light and the risk of getting one stuck down the barrel. I share this concern. But with lead, it seems perfectly safe to load at 700 fps. Would you guys care to share your favorite powder puff 9mm loads using lead bullets?

N.B. that WST is no longer in reloading guides for 9mm since it can be dangerous if you're trying to achieve a power factor using it. I do believe it's safe at this very low load, but use at your own risk and make sure you're not compressing the powder. The following collection of forum posts on WST may be interesting to you.

About the only difference between a 9mm jacketed bullet and a comparable 38 special bullet is the OD.  38 Special jacketed run as low as 900 fps in a vented barrel.  The 38ACP and 38 Super are loaded to 900 and 1200 fps respectively.  Same case and bullet.  The real issue is functioning.  But be cautioned, there’s only so much you can do with spring adjustments.

my typical load for my 38 super wad gun with slide mounted scope was a 126 gr SWC from Dardus and 3.6 gr of BE.

2.7 to 3.0 bullseye with a penn 115 conical, shot under 2" at 50 yards in a kkm 1-32 barrel. The 2.7 wst load above was also good. Note the proper diameter and bullet driving band length  expander plug is required, otherwise, you swage the bullet during seating.

As a result of that thread I spent some time scouring the internet looking for information on very light 9mm loads. The prevailing wisdom is that a fast powder and a heavy cast bullet is the best combination.

The powder will arrive this week. I plan to load and shoot some next weekend. If I have time I'll also chrono and test for accuracy on a Ransom Rest. Will post my results here.

My Beretta shoots the 147 XTP better than anything else I've tried. It's quite snappy with 4.0 gr of WSF. I'm hopeful it'll also do well with heavy cast bullets moving slower.

Pgg, 2.6gr of N310 below a heavy cast bullet should be very pleasant to shoot. Let us know how accurate it is. What is the twist rate of the Beretta barrel?

And for those not familiar with Dr. Don's research on 9mm softball accuracy: https://www.bullseyeforum.net/t3825-1911-9mm-softball-accuracy

This is where the idea started for me.

I have loaded thousands of 145 and 147gr lead and coated lead over 3.1gr of titegroup. These run in the low 900fps range and have worked in factory, KKM and Wolf barrels on a variety of Glocks, Springfields and Berettas in stock form and racing setups. Soft shooting and accurate.
Wobbley is correct regarding functioning being the issue. My experience has been that below 900fps (or so) with that size bullet requires a lot of work on the gun to keep it reliably functioning. In my case it is easier to pick up the 38sp revolver or move over to the 45.

That said, there are some guys over on The High Road reloading forum that are loading 100gr mouse fart loads in 9mm with some success.

The Beretta stock barrel is 1-10; capable of stabilizing a 180 grain lob

Believe it or not, I got lower ES and SD with the magnum primer. 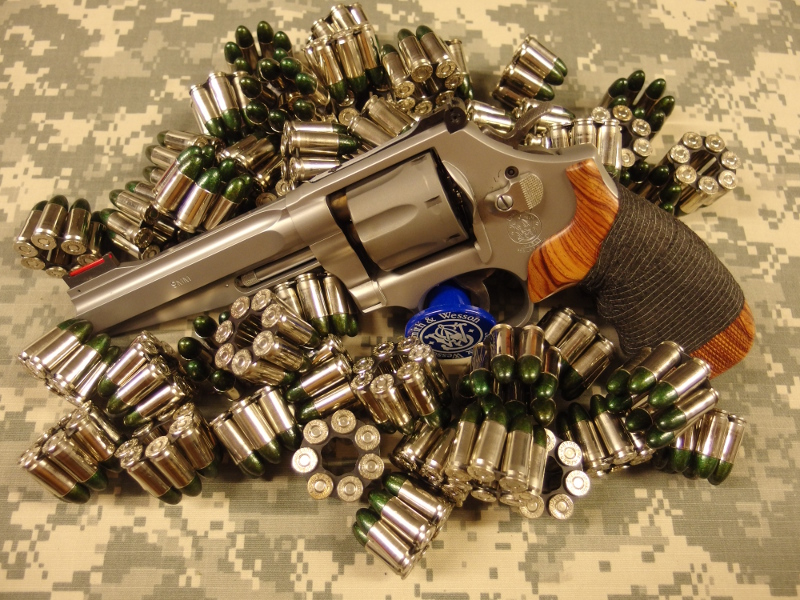 desben wrote:Pgg, 2.6gr of N310 below a heavy cast bullet should be very pleasant to shoot. Let us know how accurate it is. What is the twist rate of the Beretta barrel?

In any case, it shoots 147 XTPs with 4.0 gr of WSF very well off a Ransom Rest at 50 yards, so I have every reason to believe it'll be good for heavy lead bullets too.

I got back home a little late today, so I didn't get to do as much testing as I wanted to. I loaded up a few rounds and shot them past my Labradar.

For these few rounds I just individually weighed each charge on a Sartorius lab scale.

They fed from a magazine and extracted easily.

Functioned perfectly. Even deliberately limp wristing a couple shots, the next round chambered. Slide always locked back on an empty magazine.


I shot most of them into the dirt to get chrono data. I put a few on paper and they made round holes.

As for accuracy - in full disclosure, I am a relative newbie to bullseye shooting and a good day is when I keep all of my 50 yard rounds in a scoring ring, and all of my 25 yard rounds on the repair center. I usually follow some pistol shooting with some rifle practice to make myself feel better.

Anyway, today the holes went in a pattern that is more or less consistent with what I usually shoot. Next time out I'll take a better shooter (the Ransom Rest).

I have to say I'm pretty happy with the results so far.

I might try some at 2.4 gr to see how low I can go and still have reliable function.

Well, bit of a problem.

These rounds aren't stable after all. The few I shot during initial testing made round holes, but today was another story. Went to a local match and shot them. Put 3 shots low and left, fixed my hand position, and then shot a pretty good group (for me). 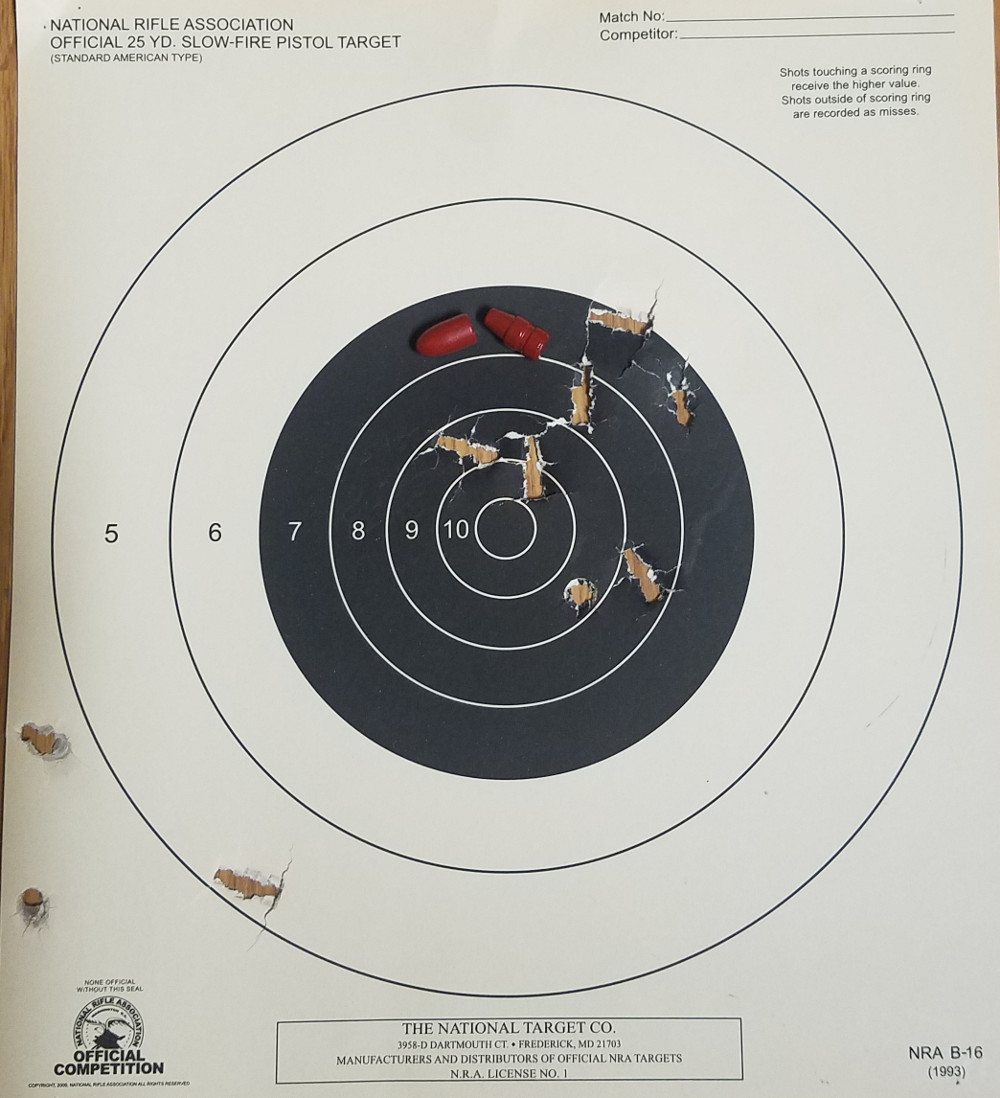 It's odd because the 147 gr XTP shoots great in this gun.

Resting on the target are the two kinds of bullets I bought for this project.

I'm going to try the shorter & lighter RN bullet to see if it's stable.

Or maybe I should just keep shooting these tumbling bullets. When they hit sideways, it's sort of like shooting a .72 caliber bullet, so that's an edge for touching the next higher scoring ring.

Well I think you may have gone too low. What load were these?

I have 3 powder puff loads for the 9mm that I consider good enough for the short line. 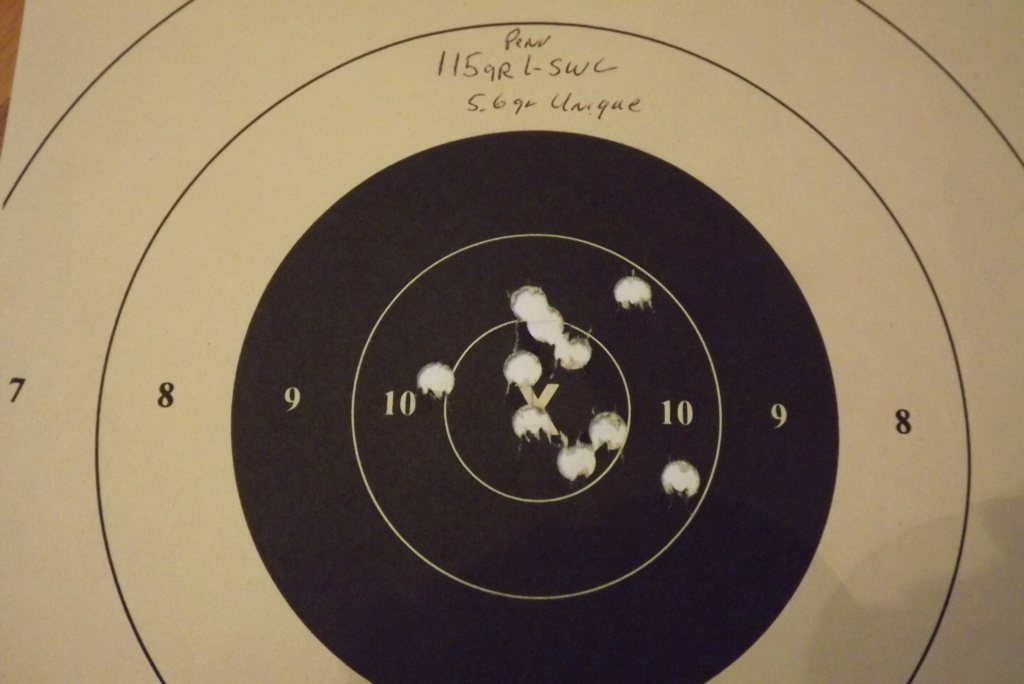 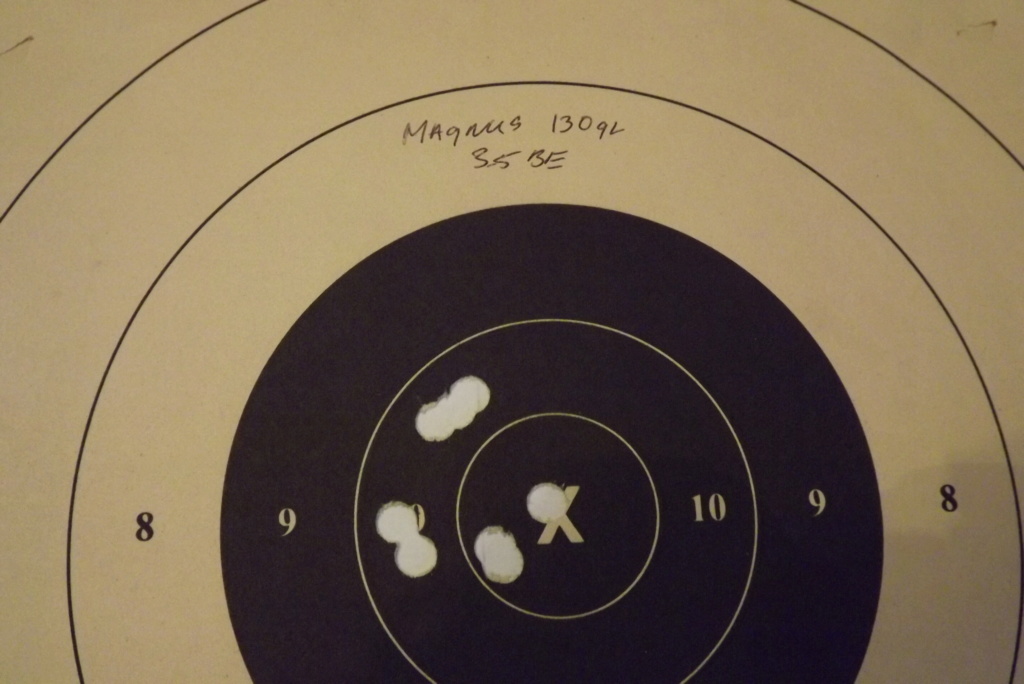 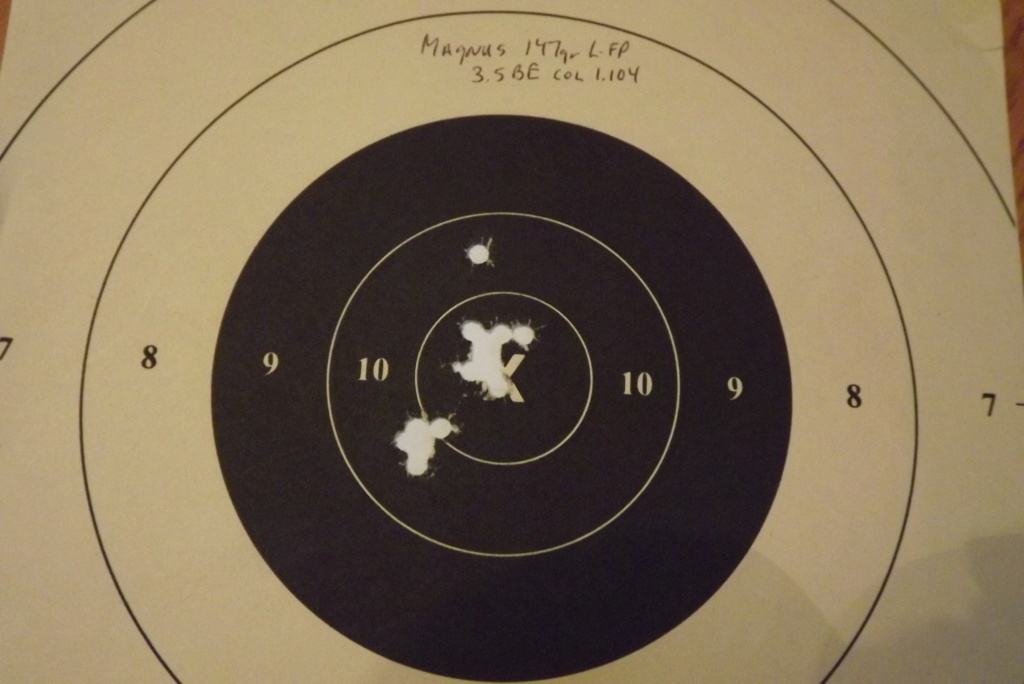 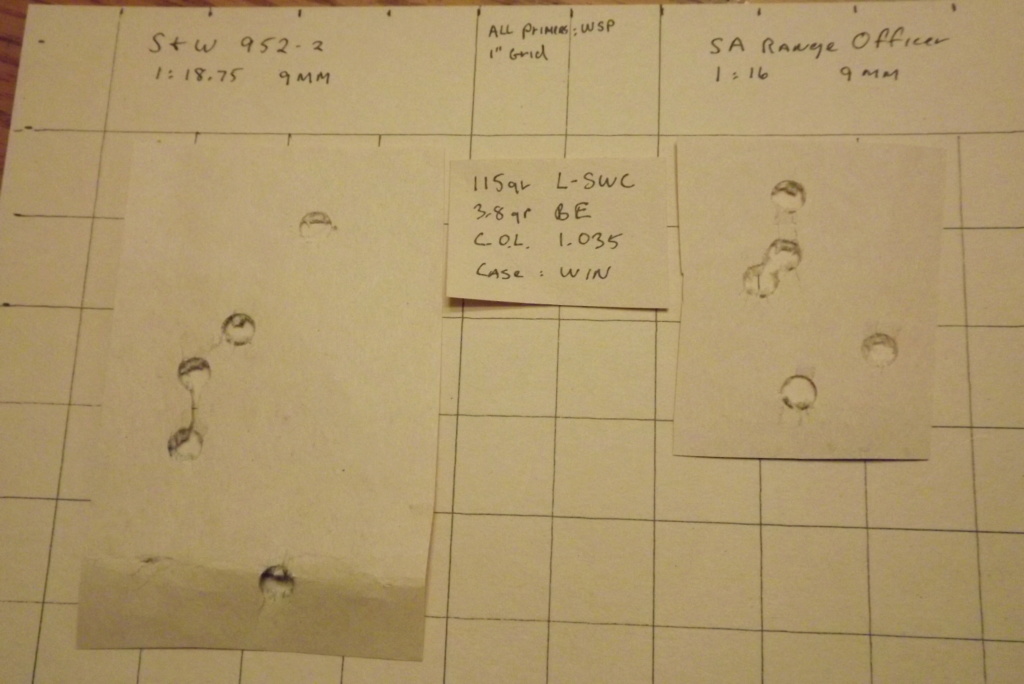 Look at the difference a powder change made between these two pistols. 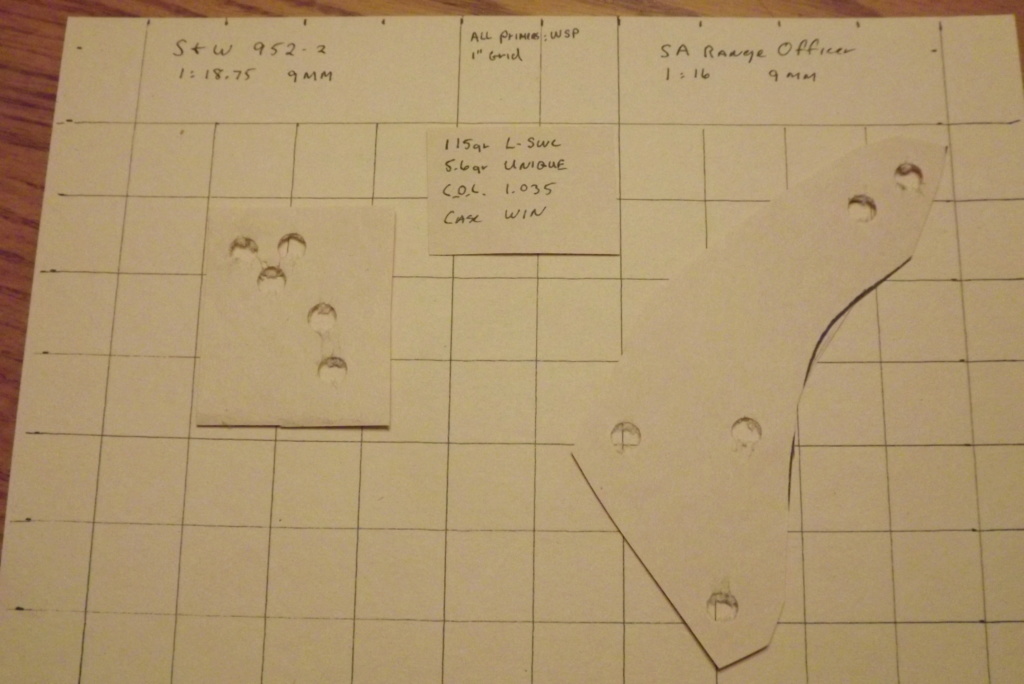 LenV wrote:I have 3 powder puff loads for the 9mm that I consider good enough for the short line.

Thanks. I ordered some of these earlier today:


Loaded up a few of the 145 gr LRNs. Going to go shoot them tomorrow.

Magnus 130gr are not 275 clones but something I have found unique to them. Almost a wad cutter with enough nose to feed well. And has two smaller lube grooves. 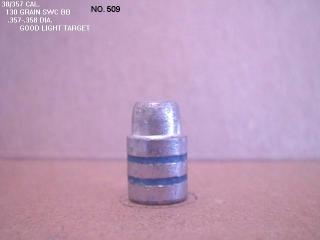 LenV wrote:Magnus 130gr are not 275 clones but something I have found unique to them. Almost a wad cutter with enough nose to feed well. And has two smaller lube grooves.

Do they make batches sized down to .356, or do you special order in bulk from them? 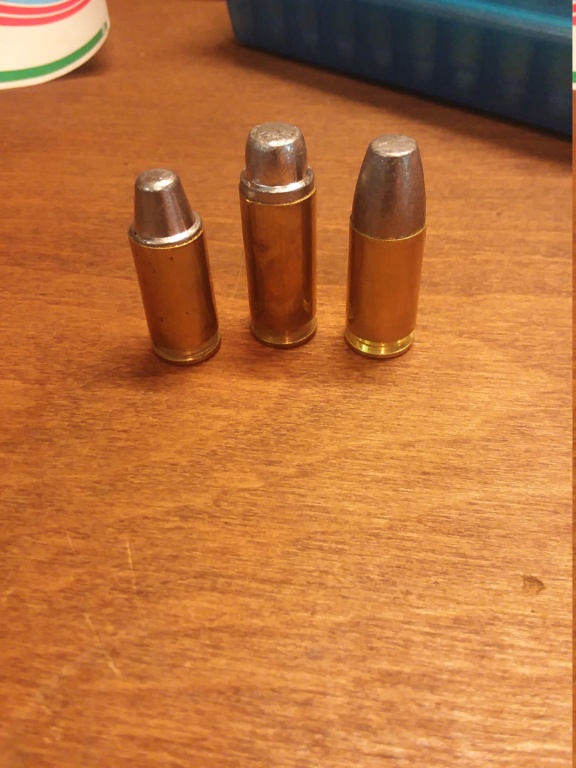 
In the meantime, tested some other combinations. These turned out the best so far:

147 gr XTP with 2.6 gr N310. Very soft shooting. Has a tendency to short stroke and occasionally not chamber the next round. Might add 0.1 gr or try a lighter spring.


All loaded to 1.100" in Winchester cases with Winchester small pistol primers. 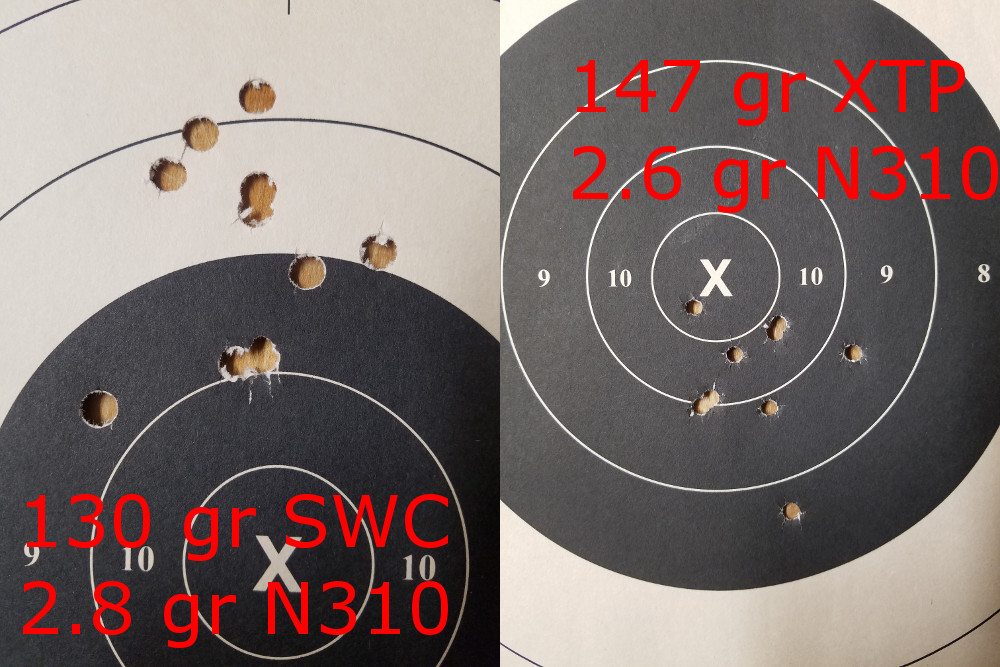 Roughly 10 ring size groups. The Ransom setup isn't ideal though, so maybe they're actually a little better. They way our range is set up, I'm stuck clamping it to a suboptimally sturdy bench with a wedge under the rear to get acceptable elevation. 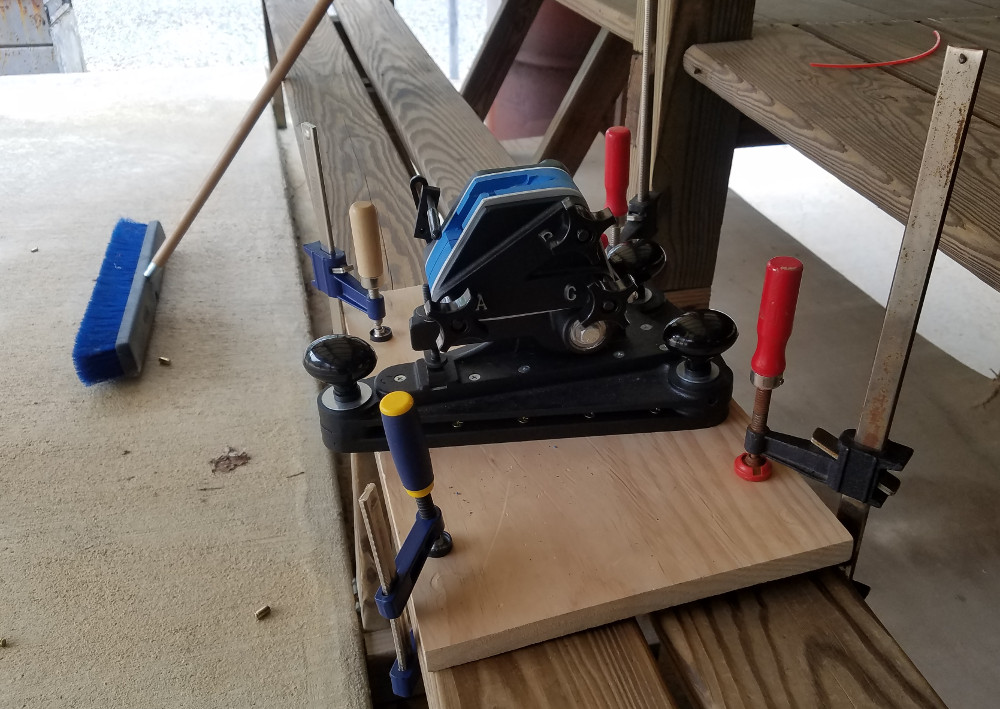 Still having trouble getting lead bullets to shoot well, but the 147 XTP is pretty good.

2.7 gr of N310 plus the 147 XTP at 1.100" is very soft and accurate. I put an 11 pound Wolff recoil spring in and that seems to have solved the feeding issues. I shot a bunch of 2 and 3 round magazines and every round fed and the slide always locked to the rear. This was a mixture of slow fire and rapid fire, unsupported standing offhand, so I'm happy with the accuracy. I jerked a handful low and left. 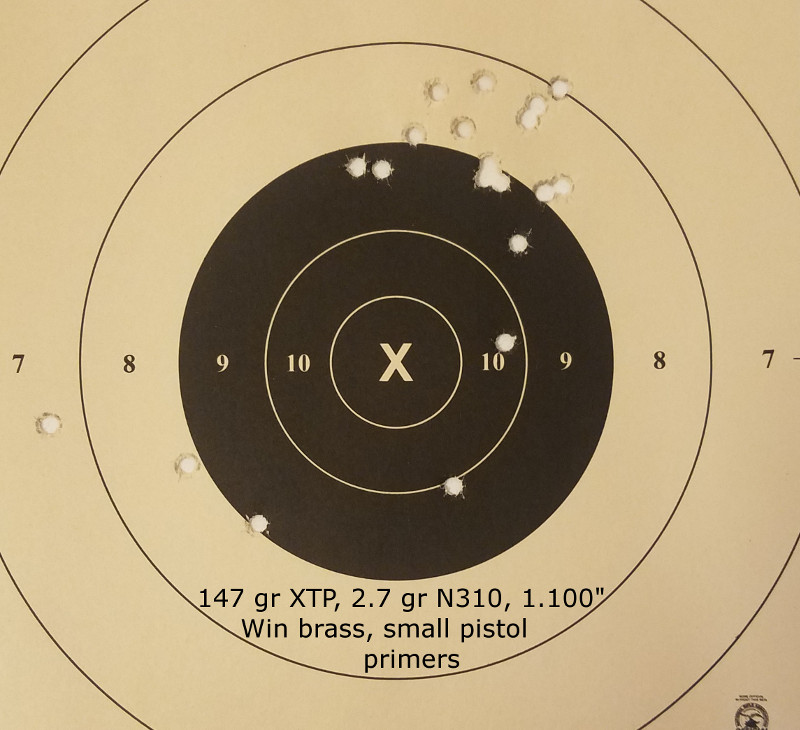 Incidentally, is there some rule of thumb or common standard concerning pistol rear sights and clicks per inch of POI movement at 25 yards? I would think not, given the variability in barrel length.

My target scanning app says the cluster of my good shots on this target is 1.1" right and 2.7" high of center. Just wondering how many clicks to guess to center that group next time I go to the range.