I'm in the process of getting my 11 year old daughter set up for shooting, she will be shooting a Ruger Mark IV standard with a Primary Arms MD-ADS, should weigh just over 2 pounds.

I will likely start her shooting 2 handed at least this year. I have a nice local match that is all 25 yards and has no turning targets. The match director is easy going but isn't aware of the probationary 2 handed shooting. How does he report her scores? She will only shoot 22 and 2 handed. I know they have classification cards for 22 only but not sure how that works with the probationary 2 handed shooting.

Screenshot from from 2016 NRA rulebook, page 56. Not sure if the 25-yd max is an issue or not. Might want to ask ahead of time just to check. 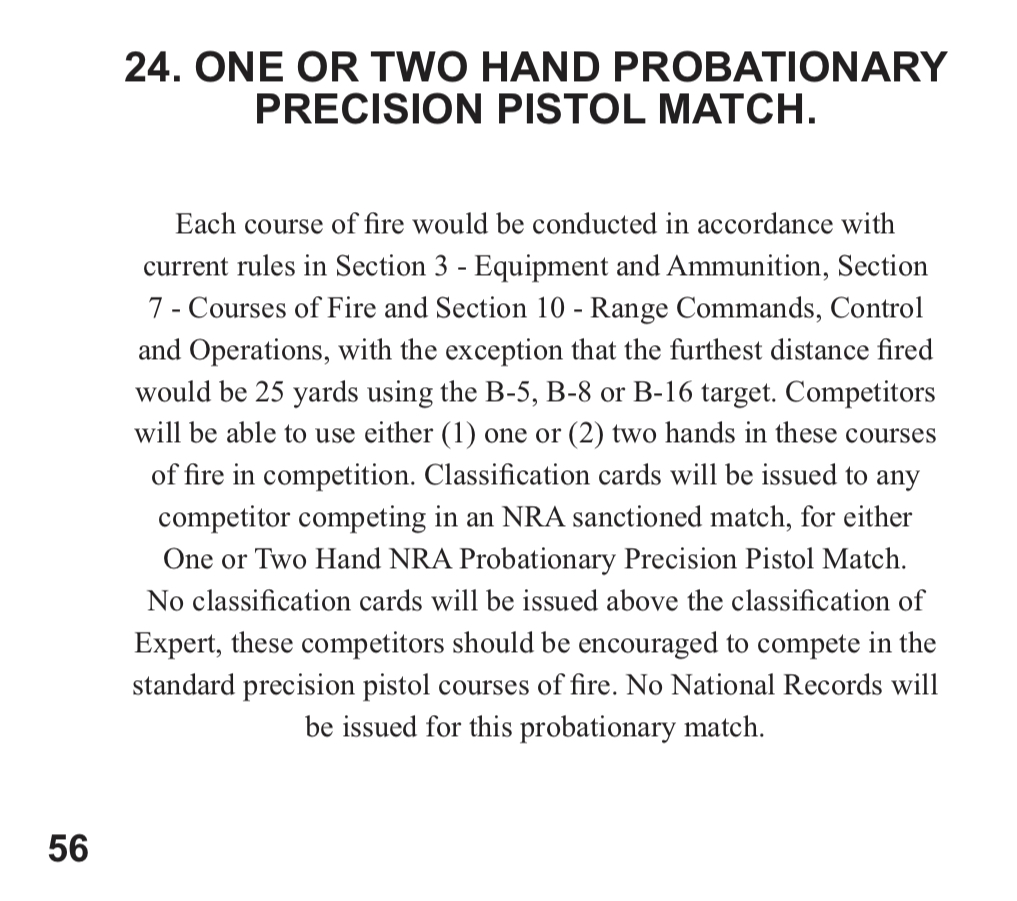 That's what I read, it's a bit vague. Do the match directors just report the scores as normal or something special?

It sounds like that is a specific match where everyone has the option of 1 or 2 handed. Not sure you can shoot "probationary" in a regular match. Just my reading.

That's the problem it "sounds" like things to different people. I have the feeling the NRA pistol committee didn't give any instruction to match directors.

As always, it is the match option to provide for Rule 24, it is not required.  Same as for .22 only, etc.  The match program should specify the details of the matches, courses of fire, distances, conditions, position and divisions allowed, schedule for awards, etc.

Secondly, classifications do not matter about caliber, only the division (Open / Metallic), match conditions (Indoor / Outdoor) and somewhat for position (rule 5.5 or one hand or 2 hand probationary match although this really does not matter, except it simply sets the limit of classification to Expert.  See Rule 24).

19.4 Matches Used for Individual Classification - Scores to be used for classification and reclassification will be those fired in individual and team matches in both indoor and outdoor NRA Competition as defined in Rule 1.6 (except Postal Matches) over the following courses of fire and under the indicated conditions:


(a) National Match Course.
(b) NRA Short Course.
(c) National Match Gallery Course (50 feet or 20 yards).
(d) Any component part of these courses when fired as single stage events. [ CR NOTE: For those of you trying to figure this out, typically the 20 shot Slow Fire, Timed Fire and Rapid Fire Matches in addition to the NMC fired in most 900 / 2700 Aggregates.]

Scores fired outdoors are used to establish outdoor classification.
Scores from Sanctioned Leagues may be used during the league firing season in Score Record Books (Rule 19.14), but will only be used by the NRA Headquarters office at the end of the league firing
season for issue of Official Classification Cards.

19.5 Compilation of Scores for Classification Averages -
Scores fired in complete matches over the above courses, regardless of the caliber of arm used will be combined and averaged to establish a competitor’s classification.

If the match director does this properly, then the match program submitted to the NRA to be confirmed as Approved or Registered Tournament, and later provided to the competitors, will specify that there will be a tournament (Match) to be fired under rule 5.5 (one hand position) AND a tournament (Match) under rule 24. (It's easier to just make 2 match programs and submit.)

The match scores would be submitted on a standard SR-1 but with the notation those scores were fired in a One Hand or 2 Hand Probationary Match (under Rule 24).  (Same as when shooters compete under Metallic Division, .22 Only, etc.  Depending on the number of shooters / divisions / positions it becomes easier to submit separate SR-1 sheets.)

The same thing should be done to make it easier for a .22 Only Tournament, so the scores would be separate from the regular match (Open / Metallic competitors) scores.  That keeps the match director from having to manually separate competitors for awards if they are all combined under one spreadsheet.  (Most shooters don't realize that the same program most of us use for the match scores also does the awards schedule from that same spreadsheet.)

For smaller matches this is not an issue, but for more competitors its easier to have separate spreadsheets / awards schedule.  And that means the match director has to set up and input 3 or 4 different spreadsheets depending on the awards by division / match type.  (For example if the match tried to accommodate the options available and awards for each they would wind up with spreadsheets / awards schedule for Open, Metallic, .22 Only and Probationary.  And most times there would not be enough shooters in any class for awards and the classes would be combined up until there were enough according to the provided award schedule.)

(For example at our matches, I specify position 5.5 only, Open awards only, Open / Metallic scores provided on SR-1 for classification, .22 only shooters scores only submitted for .22 Aggregate - they can shoot on the other Aggregates but not for awards or scores - gives them the option to shoot all day, but not get classified too quickly with .22 only.)

(And now you see why some matches have options and others don't.  It's simply a matter of how many shooters want to shoot whatever match and how much time the match director has to give.)

Anyway, sorry for the long post, but most here are competitors but as a match director I've had a lot of conversations with the NRA over the past 20 years.  If the match director has any questions, just send me a PM and I'll try to help.

Similar topics
» two handed shooters
» Probational two handed?
» Is shooting a Pardini like shooting a Steyr air pistol?
» Not my question entirely but why one handed?
» One handed .45?