If I say why I'm asking the following, that would probably influence the replies, so I'll make this generic.

For those of you who have shot both in handguns, how would you compare CCI SV ammo, (purchased usually at a rather low cost), with Elay "target" ammo (available through Civilian Marksmanship Program) ?

The two considerations would be "precision" and "reliability", especially in very hot climates. 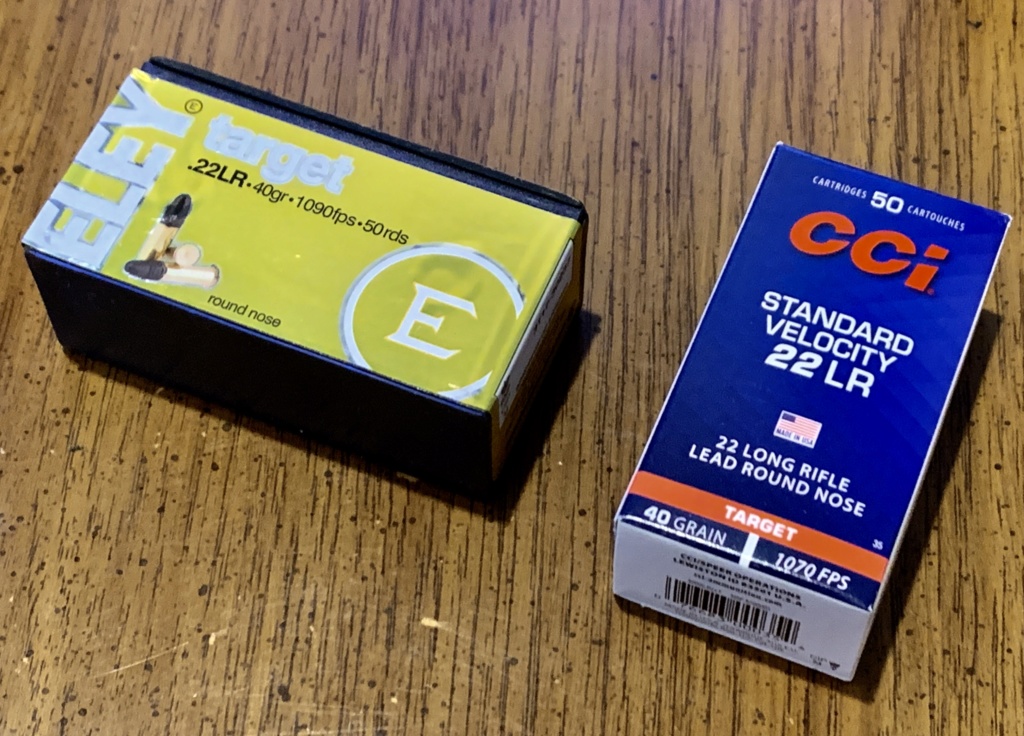 Can you post comparison photos?  What distance?  So far, I haven't noticed any difference in my groups regardless of which ammo I'm shooting.  I think next week I'll try out all of them using my so-far-unused rest.

Back in 06-07 I did some testing with a Ranson Rest & Chrony speed for check. I was testing outdoors at 50 yds with my 5" or 7" S&W Mdl 41s vintage 1970s. The summary of results are that CCI or SK produced 1" groups @ 50 yds in my 41s. Ely / Aquila were accurate but did not cycle my guns reliably all other 22s were noticeably less accurate.

Would appreciate others perspective?

I have found that the CMP bulk pack Ely shoots and functions well in either my Pardini or Marvel conversions. I have found the CCI SV 0032 or 0035 do well in Marvel, but not 100% in Pardini. I "think" this is due to variation in OAL between CCI and CMP Ely and Pardini mags. IOW, Pardini mags seemed to be ammo OAL sensitive.

I'm squinting and trying to see what the bottom two medals are in your photo. The silver-gray ones, with the three shooters - where did you win those?

Allgoodhits wrote:I have found that the CMP bulk pack Ely shoots and functions well in either my Pardini or Marvel conversions. I have found the CCI SV 0032 or 0035 do well in Marvel, but not 100% in Pardini. I "think" this is due to variation in OAL between CCI and CMP Ely and Pardini mags. IOW, Pardini mags seemed to be ammo OAL sensitive.

I think there's a combination of CCI quality control and SAAMI vs. CIP specs.
For my FAS SP607, found that CCI SV often had problems. Often with failures to feed with the bolt jamming into the bullet or bending the entire cartridge.
Found that CCI HP subsonic shoots almost flawlessly. Variations in OAL length are VERY apparent in the HP bullets, or at least bad QA is. Some dimples are pronounced and deep, others just look like LRN.

Geco is made by RWS and does function well in Nelsons  but not the most accurate in mine. I run Sk std plus and pistol match in it without failures.  Like any 22 it pays to test Your gun to see what it likes. My old Marvel loves aguila pistol match of all things

CO1Mtn wrote:I'm squinting and trying to see what the bottom two medals are in your photo. The silver-gray ones, with the three shooters - where did you win those?

I take it you are speaking of me?

Actually, I think there are 4 shooters on each. The bottom two are Police Marksman Association Distinguished #16 and the other is awarded as member of 1490 Club. A PPC possible is 1500. NRA previously gave out a lucite desk set for 1480 Club. I think both of the above were either 1979, or 1980.

my nelson grouped CCI, Aguila pistol match, and Eley target all the same about 2" at 50 yard
RR but the Eley has the least amount of failure , Aguila next and CCI sv last

Years ago ago the plastic 100 box cci was made at a different factory from oo35..i.actually called cci about the two products a few years back. They said it all  comes out of the same plant these days. Just different boxes and lots....

Like Mike Meyers I spoke with cust serv Justin re CCI SV extraction problems. Justin asked for a brick of my suspect ammo to check into my extraction issues. Later Justin replied that velocity was where it should be and std dev is well within accepted tolerance. I replied that the problem with CCI STAND my guns wasn't with down range performance but with reliable extration. Then I was requested to send them the balance (4500 rds) of my batch. I did and to date haven't had a reply. on the 4500. I did receive a brick of another 500 complete with an overabundance of parrafin on the brass. No reply yet on the wax on the brass case. Paraffin on the case would I guess melt when in hot chamber and cause 'sticky' extraction.

I can't comment on the functionality as much with my experience as a smallbore shooter.  Bolt action rifles tend to work quite reliably when you at least pay something for your ammo, even CCI SV.  I had to get out of ammo snob mode when I switched to pistol.  CCI SV wasn't even good enough for 50ft practice.

I spent much of my Jr year shooting Lapua Multi-Match, which was below Lapua Master and then Midas.  My Dad and I found a lot that simply shot perfectly in our guns, though not my Mom's gun.  We had dozens of 20x targets with that stuff, and I shot numerous national records with ammo half the price of Midas and Tenex.

If you are willing to put the time in, you'll find "lower" lots of ammo that shoot exceptionally well.  Reliability I have to guess has the same distribution of good vs bad lots when compared to the number of accurate (consistent) vs lots full of fliers.  Just want to insert the numerous times experienced folks have told me to skip the testing and practice more until I can tell something's wrong with the ammo I'm shooting.  I hear many of us will never get to the level of competency.

100s don't come up regularly enough for me right now, so I'll keep using the cheap stuff so I can practice more (once I fix my wrist problems...not shooting related unfortunately).

They kept mine for quite a while, and shot a LOT of it before they decided it was fine, and melted wax was causing my issues.  I had the extraction problems, and for me, it seems to have been the wax.  They sent me replacement ammo, which I hope to try this week.

My temporary "favorite" is Eley "target", but I have others to try.

Replacement for the initial brick of 500 was received 18 Sept. No printed explanation of findings at CCI. Verbal was veocityl checks ok as does s.d.. There was some, about 1/10 in, wax on the brass. Not all but 'some'.

5000 rounds received Friday. No additional information on how this fared in testing. Kinda doubt that it'd be tested sgain.

Cliff Notes verbal version was that yes, wax on the case was the probable cause. All plus an additional 500 were replaced at no cost.

No mention if assbly line would change the wax and go to a dry lube.

Untill I find a reasonable cost alternative, I will be wiping off wax during half-time televised college football.

The reason for the wax, is reduce leading in the barrel.  Maybe you shouldn't wipe too much off.
Not sure.