Leupold Delta Point Pro?,  or Vortex Venom? , Burris  Fast Fire?  Which red dot you like and Why? Thanks

Do you really want a reflex style sight? They are lightweight which can be good if you have issues with pistol weight but the dots can be tricky to obtain in the window sometimes and there's no options for shades.

You'll find a few "camps" on red dots here, several people still use Matchdot 30mm and 1" versions, I've quit using their products due to customer service issues. Then you'll see a lot of people switching to Aimpoint 9000SC and micro versions depending on how much weight you can handle, the 9000SC in my opinion is the best bullseye dot on the market if you can handle the size and weight. Their micro dots as well as clones by Primary Arms (MD-ADS) and Holosun get good reviews. You can get aftermarket shades for both Aimpoint styles.

I’ve got two Burris Fast Fire3 and I like them. They’ve held up fine.

There are also The Sig Romeo line and a “LOT” of the action crowd shoot these. I haven’t found the dot hard to reaquire with these Burris sights at all. If you want an inexpensive tube dot look at the Romeo 5.

I have 5 Millett tube type red dots. Model #SP-1 you have to get them on the used market. Very good priced and have never failed me. Love those red dots. I have a Vortex Venom on a Single Six. Also very got but it is tricky to find the dot quickly when you want to. I like it but still like my Millett's better

I have several Milletts myself. I did not know they quit making them. Our local Bi-mart still has them for sale. I prefer the SP2 in 30mm but only because that is what they stock. I was testing the mount on my 52 a while ago and plopped a Millett on there because it was handy. There was nothing wrong with that combo. 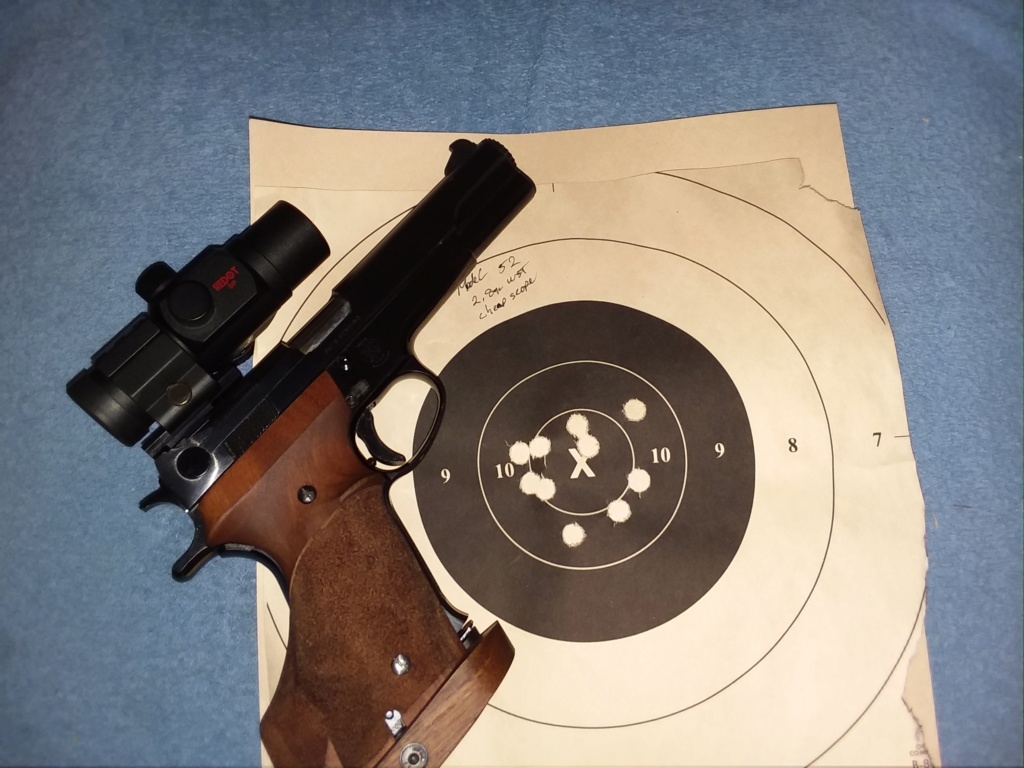 I wonder why no one has mentioned ultra Dot scopes ? They work pretty well.

They just work. I've heard of a couple failing, but nowhere near the number of Ultradots.

You can put pretty much anything on a 22. It's the non fixed barrel CF and 45's that you gotta worry about.

Lastly, yes, a master/high master can probably shoot a reflex sight just fine. I am not that. When I tried (Burris FF3), I had issues losing the dot during sustained fire. I've improved since I sold it, so maybe it wouldn't be an issue now. But it's tube sights all the way for me!

I had many Vortex Venoms (in both 3 and 6moa) and one Burris FF3 - all now sold. Only after I got more serious and concentrated on Bullseye did I discover that I see a lot of "flare" on the Reflex type dots and it is much harder for me to find the dot during sustained fire. I have now switched 100% to 1" Ultradots and feel much better.

I had to send one back to UD - but they turned it around quite quickly and modest cost.

I'm told that many of the failures suffered by others are due to ejecting brass smacking the underside of the sight - which eventually destroys the electronics. Roddy Toyota builds very nice deflectors into his 1911 sight rails to prevent that problem.

I have not yet tried an Aimpoint, so cannot offer any comparative opinion. But I do admit they look cool on those low profile mounts that KC and others use.

What is the difference between an ultra dot and a vortex venom red dot. I use that vortex 3 moa on my 22 caliber model 41. I just order a leupold deltapoint pro 2.5 moa  for my sig p320 x 5 legion 9mm. I hope to get into some bullseye shoots this winter.

UD (and Aimpoint and others) are "tube type". The VV, FF3 (Docter - which I understand was the first design) and many others are "reflex" type. Google those terms to get a more erudite definition than I can offer.

What I do know is that if your suffer from even minor Astigmatism, the tube sights seem to provide a more sharply defined dot most of the time. And the tube seems to help you to "feel" where the sight is in relation to the gun and so the dot comes back into view much easier in sustained fire.

Having said that, the "run & gun" crowd all seem to favour C-more red dots which they say offer a wider field of view and fastest dot recovery. And they shoot much faster than is required in Bullseye. There are also several new sights by many makers which are developments of the original designs/styles - I have no experience of them.

If possible borrow a gun and try them. I did not do that and spent a lot of time & money buying and mounting lots of sights before I settled on UD's.

I liked the Ultradot Four Dots. However, these days, I have gotten a lot of use out of the Primary Arms 50k hour Micro Dot.

This summer, I heard the AMU say that the UDs loose precision when adjusting over time. By that I understood them to say if we adjusted the up 8 clicks and then down 8 clicks the POA would not return to the same point. Same point with respect to windage. I'll be testing mine when I get some time. If I see a problem with them, I'll update this thread.

This summer, I heard the AMU say that the UDs loose precision when adjusting over time. By that  I understood them to say if we adjusted the up 8 clicks and then down 8 clicks the POA would not return to the same point. Same point with respect to windage.  I'll be testing mine when I get some time. If I see a problem with them, I'll update this thread.

For a funny looking dot, to test, rotate the scope while looking at the dot. If the dot which looks oblong, etc., rotates with the scope, the scope is the problem. If the dot stays in position and the dot doesn't rotate, it is your eyes that are the problem. Unfortunately there is no warranty on those peepers.

Why no mention of UD's

jimsteele wrote:I wonder why no one has mentioned ultra Dot scopes ? They work pretty well.

I've heard the same about the Japan made Millets.

No idea what I would go with if I was starting over today.
Al

put one on my Marvel coversion, good results so far

Similar topics
» Are these BE guys shooting RF or RF guys who shoot BE?
» Welcome New Members
» NOOB, learning a new sport
» Classification Question for the Old Guys
» Traveling - one guys setup.