What make and model tube red/green dot you guys suggest for my Smith model 41? This pistol has a built in rail? What size dot for 50 foot 22 shooting?  I have a leupold delta point pro 2.5 moa on it now. The red dot looks fuzzy to me and covers to much target. Its also hard to pick up the dot indoors. Thanks

Utradot Matchdot or Aimpoint are very popular for good reason.

You will want the smallest dot possible at a faint setting to allow your eye to focus on the target.  Counterintuitive to iron sights logic, but the majority of the best shooters do it this way.

Losing the dot on a reflex sight is pretty common. The tube will help you with this.

Look at the Primary Arms MD-ADS, its an Aimpoint Micro copy and very nice for the money, I'm up to 4 of them. My favorite red dot is the Aimpoint 9000SC but its too large/heavy for some applications.

Sig Sauer Romeo 5 micro tube is also great quality for the money and will hold up well on a 22 pistol.

Are 30mm tubes easier to use than smaller tube red dot? Any complaints on the Ultra Dot Match Dot scopes?

I really dont notice any difference in shooting a 30mm or 1 "  tube dot. My match dots have been fine

I quit buying UD products a few years back, not a fan of their CS and think their quality isn't what it used to be. Most of them exhibit some form of negative magnification.

30mm dots are easy to keep your eye on, reflex style sights are the hardest to keep your eye on the dot. For a nice basic 30mm tube dot look at the Sightron S30-5, the dot size is actually closer to 2-3moa not 5moa as they advertise.

Sightron only comes on 5 moa dot. Is that to big for 50 feet bullseye shooting? Another option is aimpoint?

Try asking your shooting buddies if could at least look through their red dots.  If they would let you shoot them that would be even better.  There are many different opinions for red dots.  Thats why they make so many different models.  The Aimpoints without a doubt have a strong following and receive many positive remarks with very few negative comments.  Me personally I cannot justify spending $500 or more for a red dot.  I have 3 Millets that I spent less than $100 each for and they work great for me.  I just recently bought an Ultra Dot Match Dot II even though they have lost a lot of followers.  Jury is still out on it so I remain neutral on the Ultra Dot line at this time.  I like the ability to switch between dot sizes.  My Millets are adjustable as is the Match Dot.  I am guessing here but most shooters prefer a small dot however there is are some High Master shooters  here that run LARGE dot sizes.  Me personnally I like the 6 to 8 MOA range.  I want my dot to almost cover the entire black.  With a small dot I find myself chasing it and then end run up jerking trying to make the shot perfect instead of trusting my hold.  Brian Zins recommends that you as dim a dot as much as possible and to focus on the black not the dot.  This is just backwards from everything we have been taught for iron sights.  But he should know after 12 national championships.

smsnyder wrote:Sightron only comes on 5 moa dot. Is that to big for 50 feet bullseye shooting? Another option is aimpoint?

Read my post again. They advertise 5moa but its really 2-3moa. Just fine for 50' shooting.

I used to recommend the ultra dot match dot II but the slight negative magnification issues common with recently manufactured ultra dots has changed my mind.

With that being said, I switched to a Aimpoint H1 micro dot on my pardini and I could not be happier! I was so impressed I started researching and purchasing other micro dots for my collection of competition pistols.  The aimpoint costs about 800 bucks new, there are more economical alternatives out there.

First thing i found is that you have a choice between pushbutton brightness settings and a rotary dial. I find that I prefer the rotary dial brightness adjustment because with the pushbuttons, if you are trying to adjust the brightness during a match and hold the button down for a fraction of a second too long, you can turn the dot off.  With that being said, I would recommend that you look at the rotary adjustments for brightness levels.

I purchased a primary arms micro dot because according to online reviews, they are just as good as a aimpoint at a lot more economical $160 bucks or so.  They have also gotten good reviews from other shooters in my league and I have to say that I can recommend the Primary arms.

Teh Sig Sauer red dots have had a lot of good reviews, although it is difficult to find a rotary adjustment feature but they are out there.  watch for the discontinued model STS 081.  If you can find one, purchase it because it has the rotary adjustment knob on the left hand side (as opposed to the RHS on every other red dot) which makes it easier to adjust brightness on a pistol.  I have a STS 081 on my Model 41 and I am thinking of exchanging it with the Pardini, I like the adjustment on that side so much.  My particular model has three cross bolts on the picatinny whereas other models I have seen only have one cross bolt.  I highly recommend this red dot.

I also have a Holosun on my FWB.  It is a pushbutton red dot and the only reason that I still have it on my FWB aw 093 is that it has enough clearance with the brezneff red dot mount to remove the bolt for cleaning.  I would need to practice a lot more with this set up before I used this gun for competition.

I also have a Nikon pushbutton red dot micro dot that while it performs really well, it is a push button adjustment and I loan this one out to new shooters that show up with a piece of junk for a red dot.

1 inch vs 30mm vs 33 mm.  Most newbies tend to prefer the 30 mm or larger tubes when they first start out.  After a couple weeks, when they get the basics down such that when they raise their guns to find the dot on the black, they find that the 1 inch tube presents a much better sight picture.  I would recommend the 1 inch tube.

Dot size.  Most bullseye shooters prefer 4 moa dot whereas the rest prefer a 2 moa dot. Ipsic, IDPA, and other shoot and scoot guys prefer a 12 MOA dot.  Unfortunately, most micro dots that shooters are migrating too are only offered in a 2 moa dot.  I recently questioned Brian Zins on dot size, with the new micro dots only being 2 moa dot and his response was that dot size really does not matter. I specifically searched for a 4 moa Aimpoint H1 but while it says it is a 4 moa dot, it really looks more like a 2 moa dot.  go figure.  Dont worry about it.

Allen Barnett wrote:I am guessing here but most shooters prefer a small dot however there is are some High Master shooters  here that run LARGE dot sizes.  Me personnally I like the 6 to 8 MOA range.  I want my dot to almost cover the entire black.  With a small dot I find myself chasing it and then end run up jerking trying to make the shot perfect instead of trusting my hold.

(Crocodile Dundee voice) That's not a large dot, this is a large dot!

I had problems with eye dance that went away when I switched to a dot that completely covered up the black (16 MOA at 50, 12 MOA at 25).  It performed well, too.  No dressing up of shots at all.

I've since gone back to small dot at the advice of my buddy Jon who is a much better shooter than I.  With the advice to be more disciplined with my target focus and more trusting of my hold as detailed above. 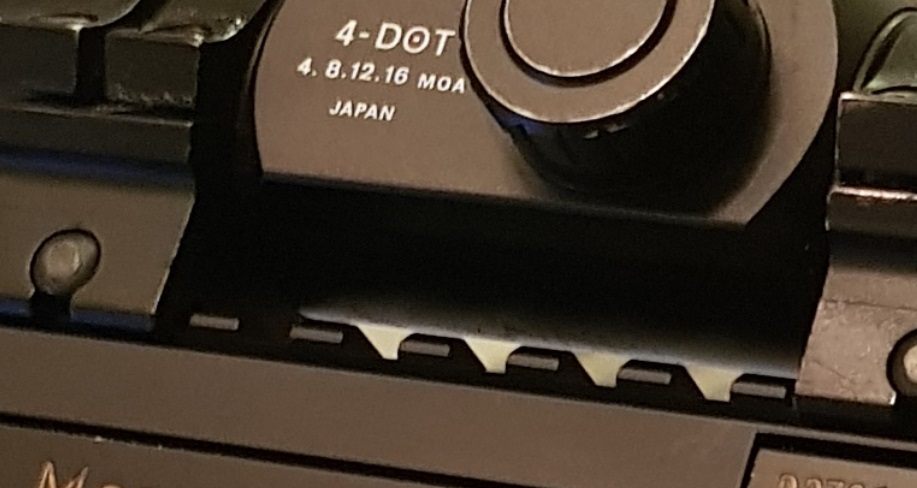 The reflex sight that you just sold has the best looking dot I've ever found and about equal as far as I can tell, to a 9000 and zero parallax.  I have them on everything non-EIC.

You will want the smallest dot possible at a faint setting to allow your eye to focus on the target.

I agree with the first part but not the last. I find a small dot makes we want to perfect the shot too much and my wobble area looks bigger. A larger dot makes it easier (for me) to pull the trigger. YMMV.

smsnyder wrote: The red dot looks fuzzy to me and covers to much target. Its also hard to pick up the dot indoors. Thanks

I'm an Ultra Dot fan but there are others as good.

If you're not seeing a round dot clearly you likely need to see your optometrist and update your prescription.

The only perfectly round red dot I've had is an old made in Japan Tasco Pro Point.  I use one on my 45 and 22.  I have an Ultradot on another 22 and it's good.   I recently picked up a Holosan and it was surprisingly really nice for $125.  A lot of AR folks use Holosan 2moa dot, and our local outdoor airgun club has a benchrest air pistol match and almost all of the shooters use Holosans.   I think it would work well on a 22, not sure if it would hold up to a slide mounted 45 but it does have a life time warranty.

You will want the smallest dot possible at a faint setting to allow your eye to focus on the target.

I agree with the first part but not the last. I find a small dot makes we want to perfect the shot too much and my wobble area looks bigger. A larger dot makes it easier (for me) to pull the trigger. YMMV.

I get you.  Like I said later in the thread I naturally liked larger dots for that exact reason.  But at the advice of my friendly neighborhood national champion I'm working on my small dot sight picture.  I guess my advice is the same as for most things, buy one of each and sell the one you don't like!