That said, I would also eventually like to shoot Distinguished Revolver, and have heard tell that many folks like the S&W Model 14. Not knowing much about revolver models, it seems like there are several types of Model 14.

Can anyone recommend a specific one? New or used? If used, how can one tell if it's in good condition? Price range?

You need to find one with the 6 inch barrel and target trigger/target hammer. It needs to be the double action version. There are few out there that are single-action only. Mine is a 14-2 with the pinned barrel.

As a supplemental question (Val, hope you don't mind), if one was to ask for recommendations limited to current production models, what would be suggested?

I use a 14-3. Love it. You may want standard width hammer and trigger depending on your hand size. If you opt to fire single action on the short line the wider target hammer may be harder for you to thumb cock. I’ve been debating putting narrow hammer on mine and I have med to large palm and long fingers/thumb.
Highly recommend you try one first.
Jon

Be a Rebel, use a Chiappa Rhino 60DS.

Keep in mind that you most likely will need to optimize pistol(s) to fit best to your arm.  I.e. I'm struggling to find adequate grips, as my arm has tendency to slip up the back strap with each shot.  I've posted about this issue in others posts.  Looking for options to mitigate this.

+1 on the S&W 14 series.
I bought a pristine 14-4 with wider target Hammer and Trigger that had just been gone over by S&W - awesome gun.  What I really wanted was a 14-5 with the full underlug.  It took 2 years but I finally found one in near pristine condition, also with the target hammer and trigger.
- Dave

FYI while I was looking for a 14-5 I bought a S&W 586 6" because it has the underlug.  The trigger was very good but not quite as good as the 14(s).  With a little work it was as good in single action but not in double action.

Colt Python if you can wait for the bugs to be worked out, which should be shortly.

I got my DR badge with a 14-1 that I paid $600 for because it was in pristine condition. I think it dates to 1961. Early on I used a 14-3 that was a service revolver. Medium holster wear but it is actually the more accurate firearm however the trigger is not quite as nice. I paid $350 for it. Both narrow trigger and standard hammer. Herrett shooting star grips on both. I shoot timed and rapid DA so the hammer width is a non issue and I like the narrow trigger.

AP I thought I showed you how to stop your revolver from rolling up. It is all in how you hold it. 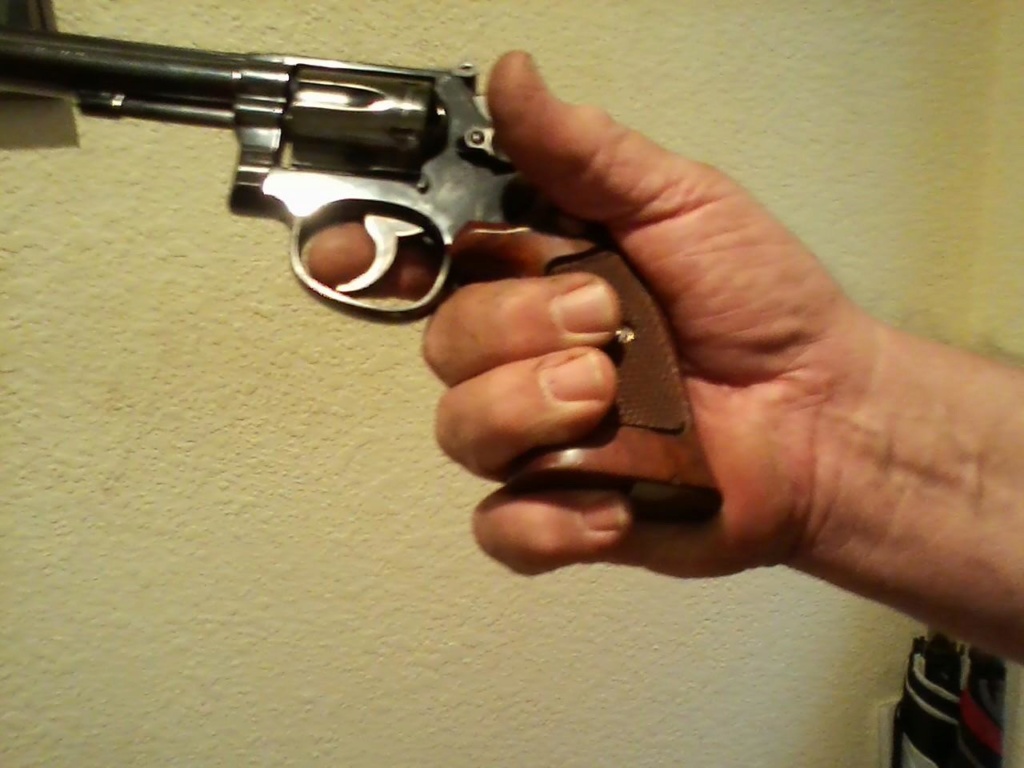 LenV wrote:I was going to suggest the 586 but AP beat me to it. So this is a +1. Anything 586-4 and newer has been drilled and tapped if you want to set it up with a dot.

AP I thought I showed you how to stop your revolver from rolling up. It is all in how you hold it.

>  Yeah, I know.  You should use that monstrosity long tuber 586-M I just bought.  That would be in par with your hand.  Still, trigger guard probably would be too tight!
AP

I shoot a 14 also. A big factor for me is if I can thumb the hammer back easily for timed and rapid fire. I have a Dan Wesson and a Ruger GP 100 that I can shoot pretty well slow fire. They don’t work for me for T or R, my grip changes too much cocking between shots. So bear this in mind when you choose a revolver. I’ve gone back and forth between shooting Rapid single and double action. I’ve had most consistent results shooting single action. Good luck!

A little more info about Model 14's. I personally think the 14-6 (top) is the best of the 14's. They come drilled, tapped and with a full under lug. They are original S&W quality and you shouldn't have to do anything to it except shoot it. Then there is the 14-8 in the bottom picture. They are the current "classic" production and available. They also come drilled and tapped but lack the full under lug. They also have the S&W kiddie lock on the side. They do require a little work for top performance. "All" you have to do to them is throw away the MIM trigger parts, have the cylinder bored to .358 and find a decent set of grips. Actually not all that expensive. 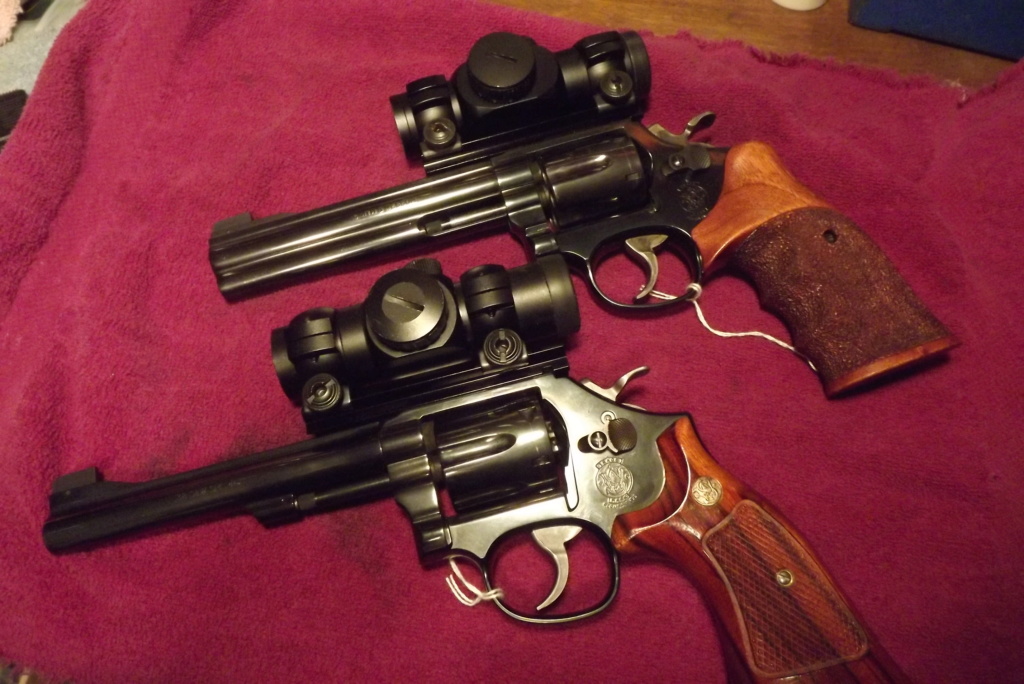 LenV wrote:I was going to suggest the 586 but AP beat me to it. So this is a +1. Anything 586-4 and newer has been drilled and tapped if you want to set it up with a dot.

I have been thinking about shooting some revolver as well and, relevant to this discussion, I have always wondered if you didn't lose accuracy shooting .38 spl. through a .357, due to the longer jump before the bullets hits the rifling?  That seems to be the theory for rifle accuracy, anyhow. 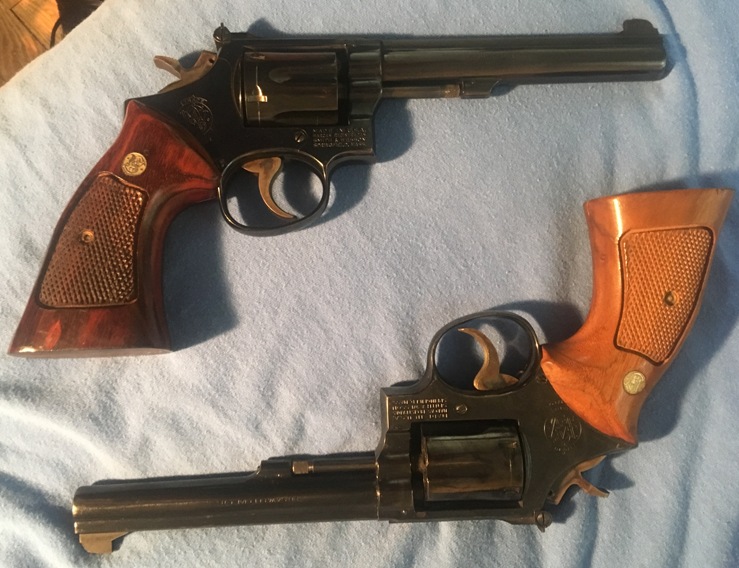 I'd like to find a 14-6. Very rarely come up for sale, and then pretty pricey.

tovaert wrote:I'd like to find a 14-6. Very rarely come up for sale, and then pretty pricey.

Me too, so since this is my thread, I get first dibs. 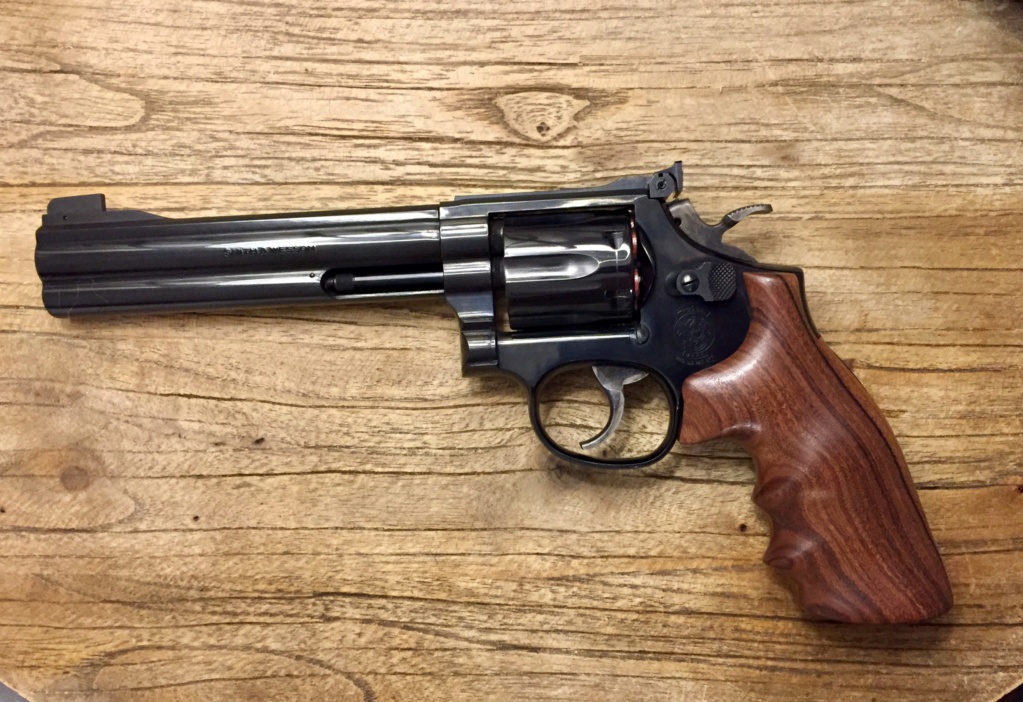 How about a 14-5?  I stole this one last year!  Gunbroker.  There were only 3 pictures and I couldn't tell if smudges and reflections were wear or not.  Turns out the gun likely had less than a box of ammo shot through it and was absolutely perfect in condition. No real ring around the cylinder even.

Opinions vary but generally all the same accuracy with correct loads

Think of it this way. You will never be able to shoot a bullet in a revolver that touches the rifling's. There is a forcing cone and cylinder gap to consider. Since even the longest bullet you can load in a .357 and still turn the cylinder is 3/8" (aprox) from the rifling's the extra 1/8" from a 38 Special case is lost in the equation. Surprisingly enough the most accurate lead bullet in my 27-2 is 148gr WC (my model 52 load) They are not legal for DR but prove the shorter case is not a problem.