Historic guns on the line.

Historic guns on the line.

What were the most common guns on the line before the 1911 started to dominate? I'm guessing Colt OMM and S&W K-22 and K-38. Any old articles on bullseye gear?

Sorry to ask a silly question, but isn't the whole concept of a 2700 format built around the 1911 for the 45 stage? So, any matches not involving a 1911 would probably be Service Revolver or PPC or similar, I guess? And, since the 1911 45 has been a US Service pistol since, well, 1911, I guess that it has been used for service competition since around then?

The 1911 prototype wasn’t completed yet.

Before the 1911 it was all revolvers so I would assume without any certainty that it would’ve been revolvers, either Colt or S&W.

Revolvers were the norm all the way through the 50's and into the 60's.  It took a while to figure out how to make a 1911 match accurate and affordable.  S&W came out with the Model of 1950 and 1955 with target shooting in mind. 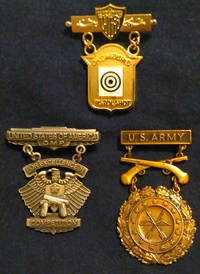 oldsalt444 wrote:Revolvers were the norm all the way through the 50's and into the 60's.  It took a while to figure out how to make a 1911 match accurate and affordable.  S&W came out with the Model of 1950 and 1955 with target shooting in mind.

That's kind of what I was thinking when I made this post. Even though the 1911 was out far earlier they weren't used much for competition until the Colt NM came out in the mid/late 50's and Jim Clark started accurizing factory Colts.

You guys are a bit off. This is a competition so you know by 1912 guys were tinkering to make them better.

Camp Perry was not a 2700 match until after the war.

Colt Shooting Master in 45 ACP and Auto Rim and S&W M1950 and M1955 in 45 ACP and Auto Rim seem to have been popular still until the 60s.  In CF, some shooters blended Smith's and Colt's into Smolts, the tighter .354 barrel of a Colt on an smoother action K frame.  I have been told Harry Reeve's did this.  Also, and this goes way back, I seem to recall the DCM/NBPRP rules allowed 1917 Colts and Smiths to be used for EIC competition into  the 70s although I never saw anyone doing it. Interestingly the Gil Hebard hard bound treasury/catalog shows S&W factory muzzle brakes for the K revolvers and the M1955.  But same book is heavy with Clark, Shockey and Giles custom M1911s in .38 and .45. Clark did a big article on .45 reloading for both the revolver and pistol that was part of the NRA M1911 handout, interesting as it compares, no crime, roll crimp and taper crimps shot from a rest.

So....  You guys know why the Harry Reeves Match is a revolver match?  Heard Of Jim Clark...  Huelet Benner?  Check the books.  I think you'll find these guys were shooting pretty big scores with their revolvers.

It's my understanding that after the Second World War, the 2700 was a true 3-gun match. .22, usually a revolver for CF, then something for .45 - either a revolver or the 1911.  Shooter's choice, and both had advantages.  IF you had good thumb-cocking skills, a revolver of that era would shoot rings around a 1911 of similar vintage.  I don't think they really had the match 1911 properly sorted out until the mid-late '50s.  I've heard that the USAF team and Frank Pachmayr had a lot to do with this, but don't hold me to that.

The 1920 matches required the use of the 1911 in the NTI.  However, since revolvers were generally favored for the NRA matches, I would think that the 1911 would be limited to NTI and EIC matches for some time.  I don’t know if the rules allowed different sights or not, but I would imagine that the 1911s used would have just been specially selected for their accuracy.  During this era, the Colt 1911 commercial models were hand fitted to at least some extent and most were reasonably accurate if accurate ammunition was used.

By the 1950s the autoloading Pistol was becoming dominant in 22 and the 1911 was being “figured out” by the service teams and gunsmiths.