Ok, Pardini USA is peddling Eley Pistol X Ammunition. I assume that this is the ammo that they would recommend for Pardini Pistols.

Hi Fellow fellow shooter in the east Texas region bought 2000 rounds so it’s not by the case only that I know of.

I've got a case on the way - will test and report in due course. 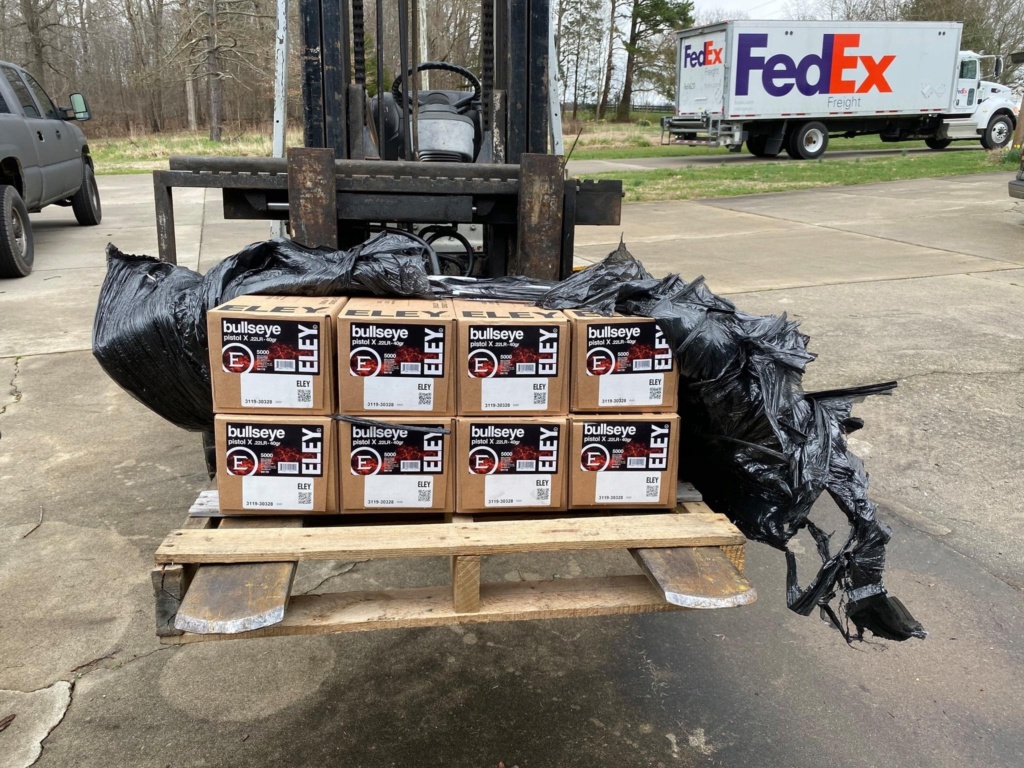 I ordered 2 bricks from them last week?

Jon Shue hoards it lol
I like the knife edges on the forks...great idea.

Now that is truly where his government stimulus money went to unless he’s independently wealthy or sells the ammo at a small marlup .........Just kidding around

If you mean Eley Bullseye Pistol X, I bought a brick, not a case, from them not too long ago.

Not sure about this:

Probably measured out of a pistol verses a rifle barrel

I think the Eley product line is a little bloated.

Is this a "special recipe" for Bullseye Pistol, or a relabeled Match, Team, Club or Target?

From what I've been told, it's a special recipe, with two different flavors.

I have a box of each waiting for me at my club, but I haven't gone over to get it because I don't have anywhere to shoot it anyhow.

interesting that it is priced right with Target for the most part. same lube they use for any semi auto

This is interesting because my Pardini runs CCI, Aguila, Wolf, SKS, and Geco extremely reliably. However it does not run well with Eley Club. I was surprised and disappointed because Club had been my most accurate ammo out of my 41.

The case of Eley Bullseye Pistol X arrived safely today. I took some out the range where I was intending to do some 9mm ammo testing.

Shot over my Caldwell Chrono positioned at about 15' from the bench. With Pardini SP22 5" barrel and 1" UD (recoil and magazine springs almost new) - not cleaned for ~500 rounds, sorry! I had some Aguila Pistol Match and some Aguila Super Extra SV in the box with me, so I shot some of that too for comparison.

The Eley functioned perfectly and is very clean to handle. The Aguila Super Extra SV also functions faultlessly, but I keep having failures to feed the Aguila Pistol Match - strangely, usually only during slow fire after one shot, particularly when the gun is cold or a bit dirty.

Here are the chrono results:-

The groups were all basically one ragged hole, arguably one of the Eley groups was tightest at about 9/16", but simply academic at such short range. Need to test again at 50 yards.

I completed my ammo testing and then went on to shoot a 900 with the Eley ammo. It was quite late afternoon, sunny, but with a gusting strong breeze. NRA 50' targets shot at 45' (the limit of my local range).

The first Slow Fire card was this:- 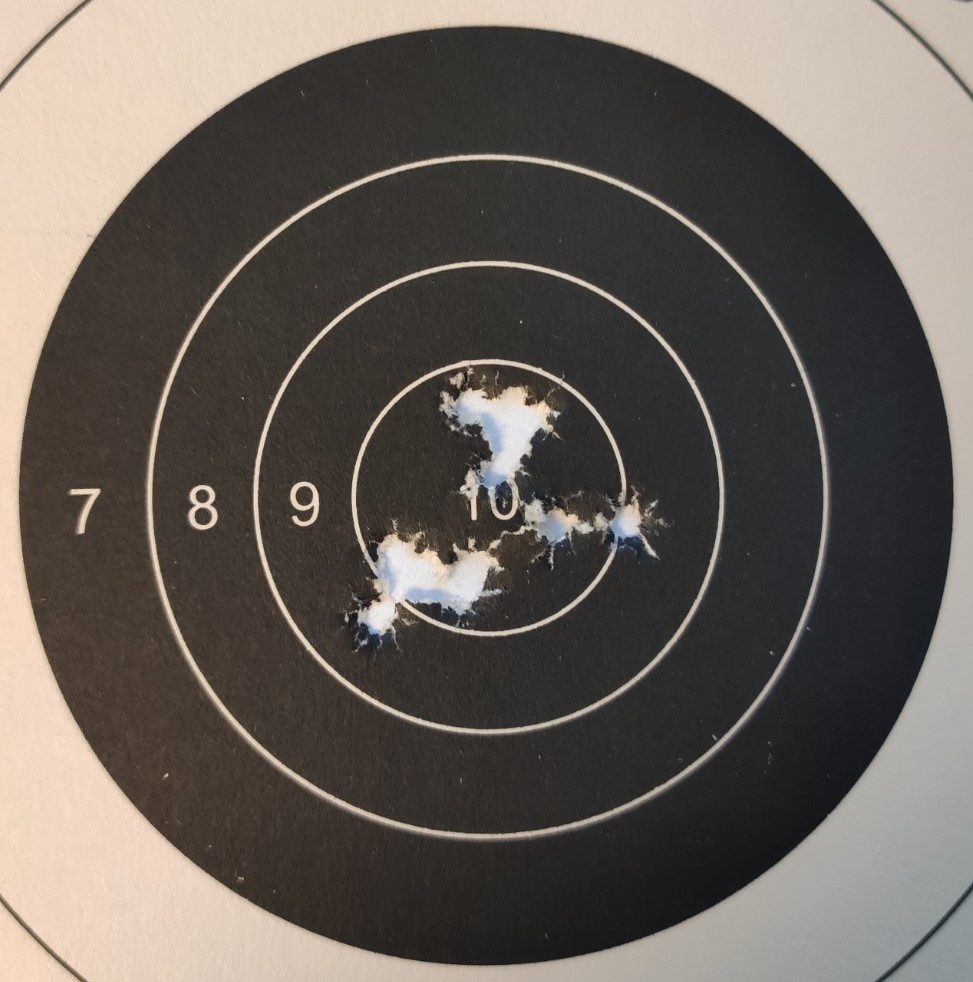 Sadly the wind got up and I was not able to beat my PB 900 score - but still a very creditable 882 - happy with that and my best so far this year. Absolutely faultless ammo throughout the 900.

So, as far as I am concerned, Eley Bullseye Pistol X is the best 22LR pistol ammo in the world!!!!!!

Curious what are the differences between BPX 1 and 2? Is there only one type of Eley Bullseye Pistol X or two types? Is that a typo for BOX?

I bought a brick from Pardini, there is no indication that there are more than one type.

By the way, Killough tells me this ammo is only available from Pardini USA, it is basically their private label Eley ammo.

Mikemargolis. No, all shot from the same box/batch - just my abbreviation for Bullseye Pistol X target 1, target 2 when I type in a string name for the chrono.

I have to say that my Caldwell Chrono - despite being the latest updated model - is quite unreliable. This particular one has not been dropped or mis-handled in any way and I am very careful to align shots through the lower middle of the "window", but I often get ERR readings for no apparent reason. I am therefore not 100% confident about the FPS readings I'm getting. Very frustrating.

The UPS man just dropped off a case of Eley Action from Killough - it will be interesting to see how that compares to the Eley BPX. I hope to run some over the chrono and shoot a 900 with it this afternoon.

The UPS man just dropped off a case of Eley Action from Killough - it will be interesting to see how that compares to the Eley BPX. I hope to run some over the chrono and shoot a 900 with it this afternoon.

VERY curious to see how that goes. I shot 100 rounds of the Action yesterday, and was very pleased with it.

Toying with ordering a case, but that's $275 plus $50 shipping, and I don't need two cases to qualify for the $500 threshold for free shipping.

Anyone in Connecticut want a case of Eley Action?

CrankyThunder wrote:Ok, Pardini USA is peddling Eley Pistol X Ammunition. I assume that this is the ammo that they would recommend for Pardini Pistols.

George,
I suggest you buy two cases of this immediately! Ammo made specifically for your Pardini!

Steady now boys. I will post the results of today's testing as soon as I finish dinner

CrankyThunder wrote:Ok, Pardini USA is peddling Eley Pistol X Ammunition. I assume that this is the ammo that they would recommend for Pardini Pistols.

It is private label by Eley for Pardini USA, nobody can sell it but them.

I was told that by Killough today.

Killough, as you may know, is owned by Eley, so they should know.

So, I crowed about the new Eley Bullseye Pistol X (see above).

This morning the UPS man dropped off a case of Eley Action ordered from Killlough's (owned by Eley). Very fast delivery.

When I got to the range at mid-day it was bright sunshine, but here on the Oregon Coast that usually means the wind will become progressively stronger till evening. So I decided to shoot a practise 900 with the Eley Action first. Very disappointing,

I did not shoot a "clean" SF card like yesterday with the Bullseye Pistol X. But I did get pretty darn close and was able to shot my personal best SF Aggregate of three cards:-

I also, amazingly, equalled exactly the same 900 score from yesterday - 882. These two sets are equal to my best so far this year. To do it on two consecutive days with different and new ammo is just amazing.

I then moved on to do some chrono testing. I decided not to shoot off a rest for groups, that is academic at my short range. What I did instead was to shoot standing, one handed, Bullseye style, at roughly Timed Fire pace through the chrono with no target. I then discovered that this can also tell you a lot about the different ammo characteristics - I was surprised - Aguila SE SV is noticeably sharper than the other target ammo. Aguila Pistol Match feels a lot softer (and can suffer failure to feed). Lapua Pistol King is clearly the softest feel, no feeding problems in reasonably warm weather, but I now have an explanation as to why I had some problems with my MG2 in the February Sectionals. Grrr...

This comprises all of the 22 ammo I had in stock - the CCI Clean was bought to use at an indoor range where uncoated lead ammo is not permitted - it is definitely not match quality, but I wanted to see how it performed over the chrono. The results:-

I had no failures or mechanical problems with any of this ammo on this nice sunny day. All of it ejected and fed smoothly. Most of the brass popped out nicely into my net.

As you can see, the Bullseye Pistol X is somewhat faster than the Eley Action, quite close to CCI SV actually. Both of the Eley types felt smoother to me than the CCI SV, but that is purely subjective. The Eley Action seems to be quite comparable with Eley Target.

Had I known about the Eley Action at the time when I discovered that Aguila SE SV was not available I would have definitely preferred to order Action rather than the (5 cases - grrrr....) of Aguila Pistol Match now in my gun room. Ho hum!

Is the Bullseye Pistol X superior to Eley Action? Impossible for me to judge when shooting on a 45' range. In due course some High Masters will no doubt do more quantitative testing at 50 yards. But based on my very limited testing they both shoot extremely well and obviously suit the Pardini. I have not yet had a chance to try them in my MG2 - this weekend most likely.

My opinion right now - I would use Eley Bullseye Pistol X for competition and Eley Action for practise. If I could easily offload all of the Aguila Pistol Match I now have in stock I would do so. Grrrr........

Sorry - I'm duplicating this text on two threads - here and on the Eley Action thread, but I think that folks want to see the conclusion of this story.


I tried the Eley Action in my MG2 today. I did have one peculiar FTE in the very first string - maybe because of cold (and slightly dirty) gun, no problems thereafter.


I first shot one complete 900 with Eley Action. Results were very similar to what I got from my Pardini yesterday. 877 with a very high TF/RF x-count of 32. I was not feeling quite "on my game" today compared to yesterday and so this is about as good as I can shoot. I am not a High Master, but have managed to achieve HM scores with both Pardini and MG2 with this Eley Action.


I think that the MG2 runs better with slightly hotter ammo. Aguila Super Extra SV suits it well, the slightly softer (and much like Eley Action) Aguila Pistol Match does not run smoothly, quite a few FTE's with Pistol Match over the past few weeks.


This is rather subjective, but I feel that Eley Bullseye Pistol X suits the MG2 better than Eley Action. I will take more to the range on my next visit and do a 900 with BPX. I will also clean the gun (I hate doing that) and try Eley Action again.