smsnyder started a thread recently about "tupper ware" pistols and also another thread about "best non-1911 9mm", both threads seemed to take on a life of their own, probably way beyond Mr. Snyder's expectations. I have owned several higher end polymer (and steel) framed 9mm's in the past, but sold them on after being disappointed with the triggers and accuracy. Since then I realise that I may have been a bit too quick making my conclusions, I now understand that 9mm's are quite sensitive to ammo and I did not properly test those guns with match grade ammo at the time. Several folks on GB probably got very good deals on my lightly used 9mm's. Grrr....

Dave Ronning made a very interesting point that Springfield Armory XDM's have performed well in major events - albeit mostly in 9mm. I then realised that SA make them in 45ACP. I found a lightly used XD/M Competition Series in my favourite Candy Store and it hit my FFL yesterday. Sun was shining this afternoon and I tried it at the range "straight out of the box"! 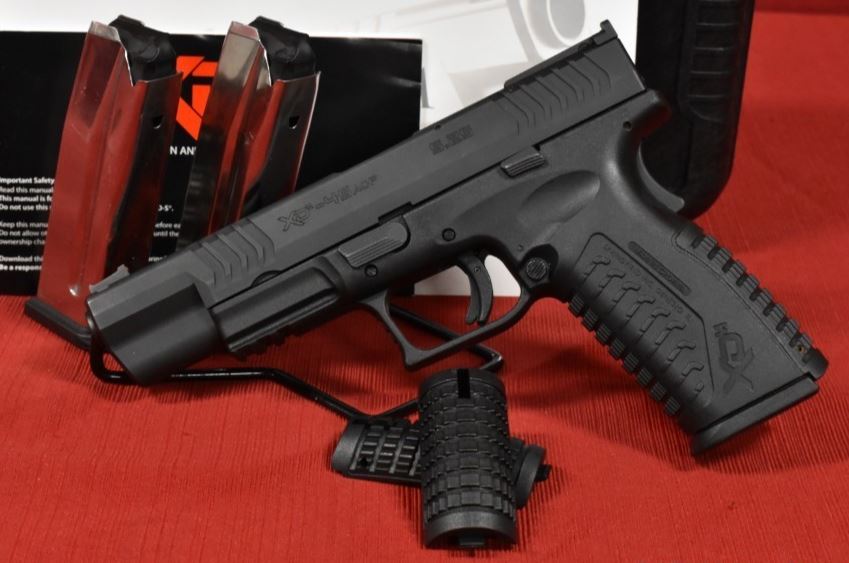 Even though it is double stack I find that the grip is OK for my medium hand with shortish fingers. I need to add a bit of grip tape so that the side of my thumb can get some purchase, but not bad. The trigger is obviously quite different from a 1911 or any of my target guns, kinda like a very long roll trigger, but it seems to break consistently. I struggle with iron sights and I knew that the OEM fiber optic front sight would not suit me. The narrowest plain steel front sight from Dawson Precision should arrive tomorrow.

It did not function well with my Brazos 160 LSWC over 4.4 N310 short line ammo, bullet just too short I guess (and those bullets are not permitted in EIC Service Pistol anyhow). After a few warm up strings it did cycle Nosler 185 JHP over 4.6 WST just fine. Interestingly, the felt recoil seemed to be harsher with the 160's compared to the 185's - don't quite understand that.

These are my first serious cards with it, both on NRA 50' targets at 45', offhand.
Slow Fire with the Brazos 160's, the sights were a couple of clicks off. 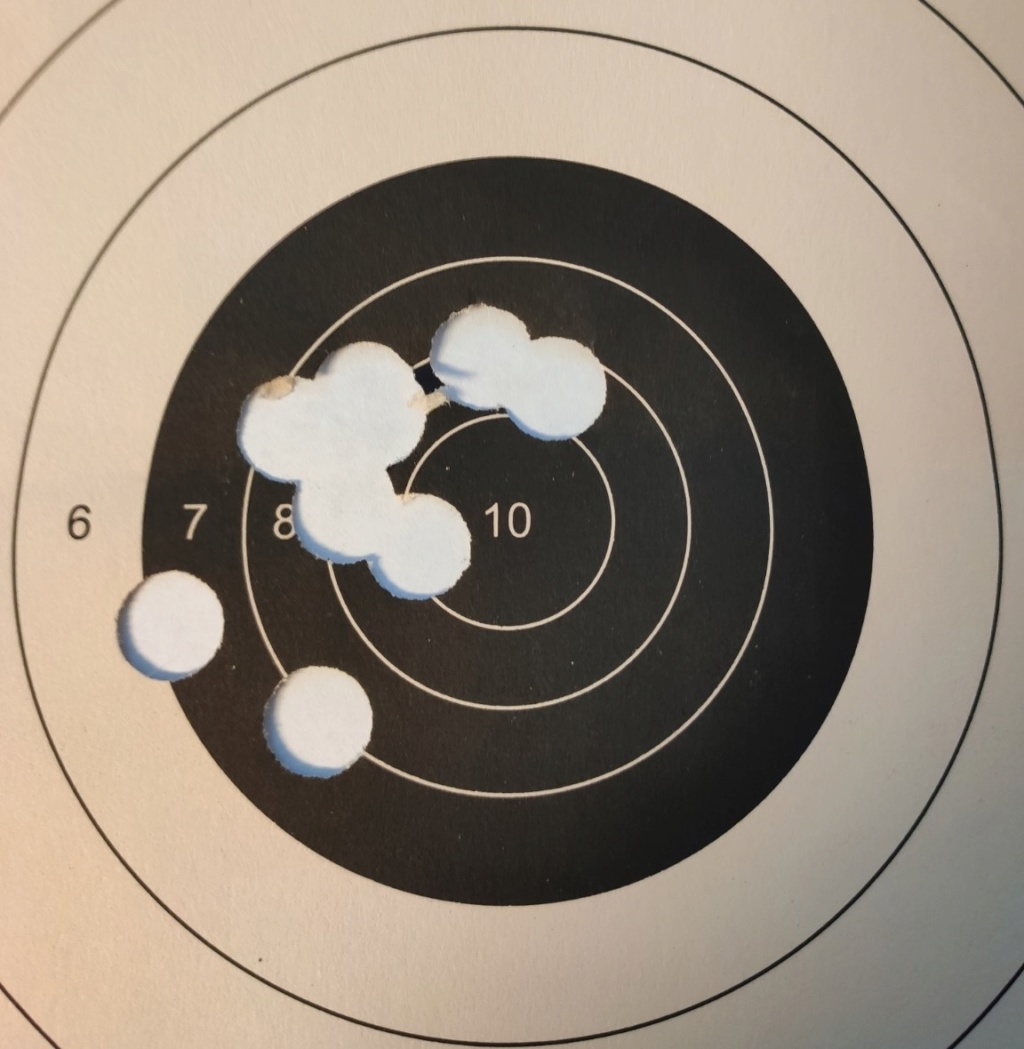 Then Timed Fire using the 185 JHP's - the flyers were, of course, down to me. 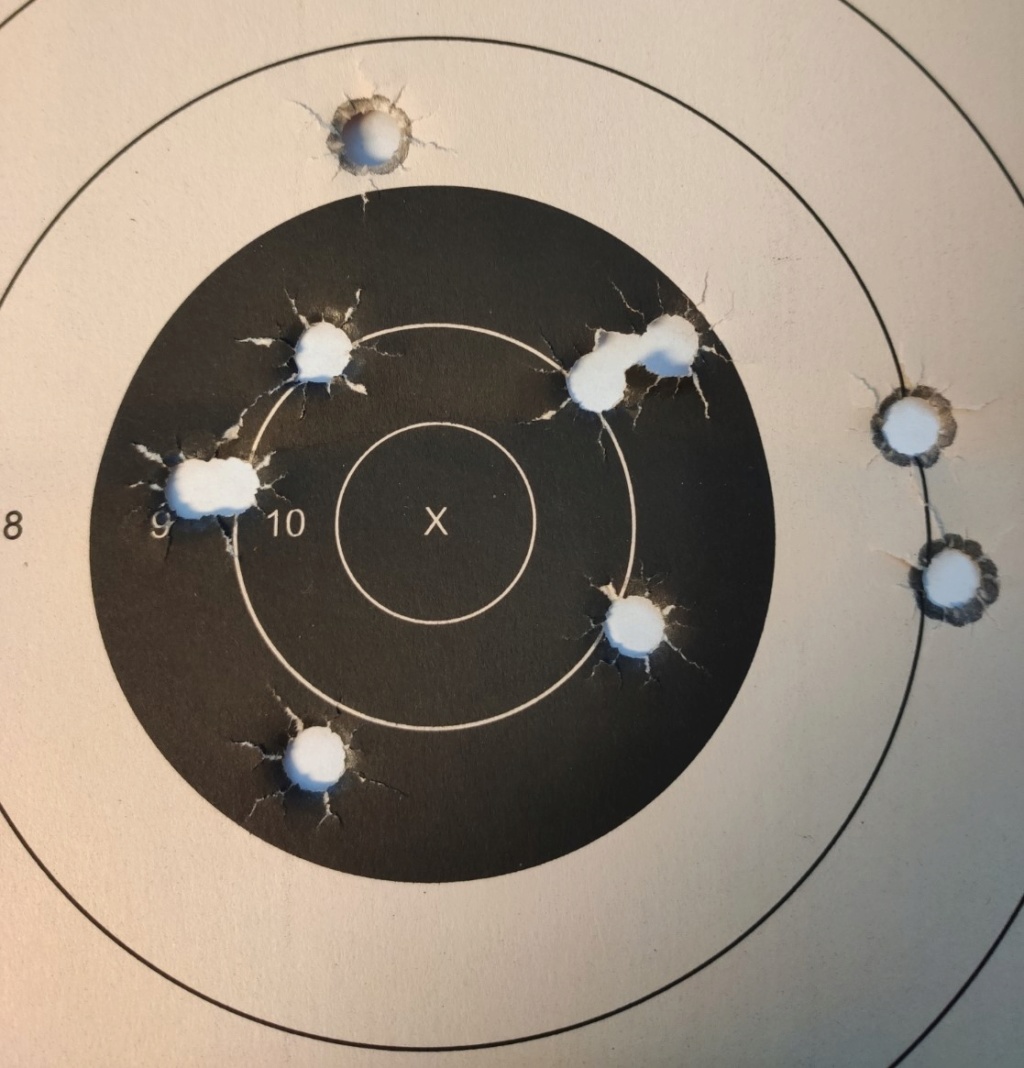 Considering this was the first time out and still box stock I'm quite pleased with the way it shoots. I admit that my Rapid Fire card was terrible, but the trigger is very different and I will need to practise a bit to get my mind around it. And, of course, these cards are at short range. I will try it at 50/25 yards as soon as the EEGC range re-opens.

But, for $600, straight out of the box, I'm quite impressed and satisfied.

Right there in your neighborhood is one of the best company specializing on after market parts for XDm - Powder River Precision.  I have their triggers installed on all of my XDm - https://shop.powderriverprecision.net/PRP-Extreme-Trigger-Kit-for-original-XDM-9-10-40-45-PRP-065.htm.  Good products, and good people too.  They can help with balancing travel versus trigger weight.  Their triggers are being used by SA Custom shop, and as such they are legal for competitions.

Alex, thanks for the tip. Do their trigger kits just "drop in", or do you have to send the gun to them? Whilst they are located in Oregon, they are about a 10 hour drive from me! Big State, few people, love it!

Roy, I installed two kits by myself, and one was installed by my friend.  There are two tricky steps if I remember, and one of them is replacing spring, that can easily fly away.  So I suggest using something like plastic bag, and work inside of it to limit fly zone.  Also, it would be nice to have a very specific small 2mm punch with handle that fits in the palm, so you can use one hand to push pin out.  PRP sells kit on their website.  I had one made by Grace.  Lastly, there are good videos that you should watch prior to installing replacement.

Here is the link to punch kit - https://shop.powderriverprecision.net/PRP-Punch-Kit-PRP-032.htm
There are number of videos on uTube. I.E. - https://www.bing.com/videos/search?q=Powder+River+XDM+Trigger+Kit&&view=detail∣=CF6806CE8EA0BFCED2F2CF6806CE8EA0BFCED2F2&&FORM=VRDGAR&ru=%2Fvideos%2Fsearch%3Fq%3DPowder%2BRiver%2BXDM%2BTrigger%2BKit%26FORM%3DVDMHRS

I talked to one of the gunsmith there once, and recall talking to a very friendly and helpful person.  Unfortunately I don't have notes with details.

Here is their own video - https://www.youtube.com/watch?v=S8-ycZ_XxMQ&t=17s

Roy, I also have a target from my XDM straight out of the box. I got it from the Sportsman's in Florence and drove the 50 blocks to the range. You are right to worry about the fiber optic sight. Maybe not for the same reason. My sight fell apart on the 8th round. My new front sight is also from Dawson.

25 yd SF/TF just not watching any clock. A perfect 80, kinda 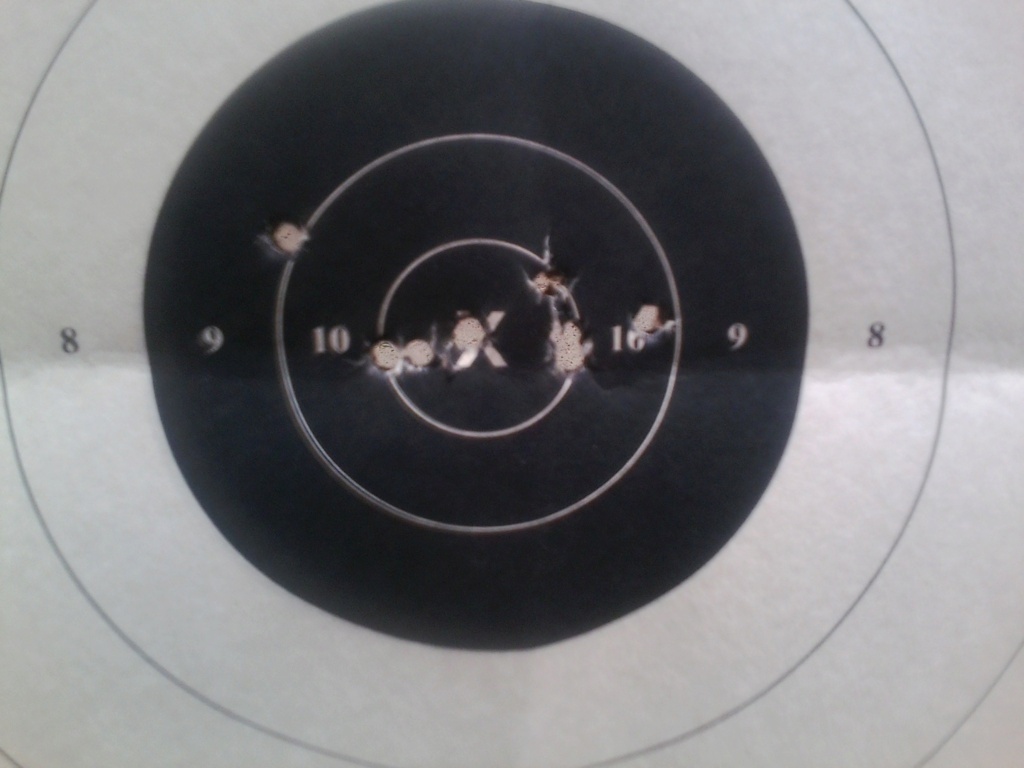 I used the PRP drop-in kits in both of my Xdm's.  Had to use a combination of springs from the kit and the original ones to stay above 4lbs. I did touch up the sear and striker with a fine stone, but didn't remove any material to speak of.   The kits were about $100 from Brownells when they had a 10% off and free shipping deal.

I have prp triggers in my xdm 45 and 9. KKm drop-in barrel in the 9. Never tried to shoot be with it but the gun is a laser. My little sisters love ringing an 8” steel gong with it at 75 yards, its completely effortless. Great all-around pistol. You will find it can cycle a much wider range of loads reliably without changing recoil springs than a 1911 will. The spring it comes with from the factory is a 16 I think and it is intended for up to +P hardball.

I have an older XD in 45 with a 5 inch barrel and it shoots well but does not like 185 grain swc's like Federal gold medal match.  I don't shoot it enough and find with full power loads it is a lot harder to shoot well compared to my 1911.  I did have a trigger job/replacement done on the Springfield which helped but it is not a fun gun to shoot but accuracy is not a problem just the jerk pulling the trigger.

Some nice groups out of the .45!! Anyone have any targets from the 9mm? I did look at Perry P100 results and saw the XDM listed. My preference is the 9 over the 45, shooting factory 9mm in a reasonably accurate and affordable gun sounds like fun.
What is the pick? 9 or 45?

Maybe it is just me, but I have not been able to get good results with "white box" 9mm ammo in any 9mm gun so far. Atlanta Arms Elite is a different story in some guns, but it is not cheap! Or a well developed reload recipe works for many, I'm still struggling with that.

Hence why I decided to try the XDM in 45. I've got to swap the front sight and upgrade the trigger, then I will test again, but it seems to work much better already for me than the 9mm guns. If it shoots tight groups with my regular long line bullseye recipe then it is perfect!

Arthur wrote:Some nice groups out of the .45!! Anyone have any targets from the 9mm? I did look at Perry P100 results and saw the XDM listed. My preference is the 9 over the 45, shooting factory 9mm in a reasonably accurate and affordable gun sounds like fun.
What is the pick? 9 or 45?

How about the 40 instead? If you buy a 40 you can convert it to a 9 as easy as swapping barrels. And there are a lot of those conversion barrels listed. If you buy a 9 you can't convert to a 40. My group above was with a 40S&W using 135gr XTP. I had loaded them down for my M&P Shield. They were loaded down but still hotter then a 9 and legal for EIC too.

The neat thing about going with the 40 is you will probably want a match barrel for your 9 anyhow. This way you can get your match barrel and still feel good about the 240.00 because you have 2 barrels that both work.