I'm considering a Pardini HP.  My questions here have been covered before but could use some links or new opinions if there are any. Maybe I'm not doing my searches correctly but coming up short.  My primary use for the pistol would be to participate in weekly indoor league shooting which for us is shot at 25 yds and consists of 22 and CF NMC 600 format.  My general sense is that at this distance either of the options would be fine.  Is that a reasonable assumption?  However, I also shoot outdoor 2700s so if the above options are equal perhaps it boils down to what's best for outdoor long line CF stage?  Maybe there are other factors for the short line I'm missing? So far I've been using 1911 format for both 22 and 45 but gotta say the grass looks a shade greener on CF side of the fence with a 32 as far as short line CF indoor goes.

I am sure I will get flamed here but unless you buy a custom made barrel for your brand new Pardini a 32 S&W Long will not even be in the ballpark as the ACP at 50 yards. At 25 and 25 only I would use the S&W Long because the wadcutter rounds punch a bigger hole but everything else the ACP blows it away. I should now I have had both

If you ever plan on shooting at 50 yards, go with the .32acp.  I went with a 5" one (though I sold it since I didn't want to reload as much).  Personally, I don't see any advantage in 6" barrels for Pardini SPs for bullseye.  If someone were to make a custom front sight, one could easily max out the sight radius for .22 EIC matches with a 5" gun; 6" guns just add extra weight out at the very end of the barrel.

The only *possible* advantage I can think of would only apply to .32 caliber guns; the longer barrels would allow you to achieve the same velocity with *slightly* less powder, possibly leading to slightly less perceived recoil.  But given that powder charges in the .32 calibers are so low anyway, it might make it even harder to keep consistency while reloading them.

That makes sense and what I recall from earlier posts.  How about whether to go with 5" or 6" barrel with the ACP?  My sense is that the 6" might be a touch muzzle heavy but might shoot tighter at 50 yds?

Agree on the 5" barrel, and with Jim Hensler on the ACP for 50 yds.  The problem with the 32 SWL at 50 yds is that there are literally no acceptably accurate bullets available in the US for that round at 50yds.  You can swage them yourself from Speer HBWCs, but that is another world.

Guys I do have the 6 inch barrel and I personally don’t think it’s nose heavy! I actually have my dot mounted out there and it has made my scores go up but that’s another topic!

Knowing what I know now I would buy the same thing again!
A 6 Inch Bullseye SP with 6 inch Bullseye HP Conversion

I have a .32ACP with 6" barrel and I can barely lift it, but when I can, it barely moves when fired, and stays on target - so I guess the added weight can be a curse and a blessing at the same time. Still if I wanted to buy another one, I'd go with 5".
The Bullseye edition has a rail on the barrel, so if the red dot is mounted on the barrel, it makes the gun even more front heavy. I mounted mine on the received as far back towards the grip as possible.
So if added benefits of 6" are real, perhaps it would be a good compromise to go with the 6" International version (without rails).
Just my 2c. You may be better off waiting till next year at Perry or visiting Pardini headquarters so that you can try various combinations and models and see which one works best for you.

I wouldn’t change a thing except for an Aimpoint 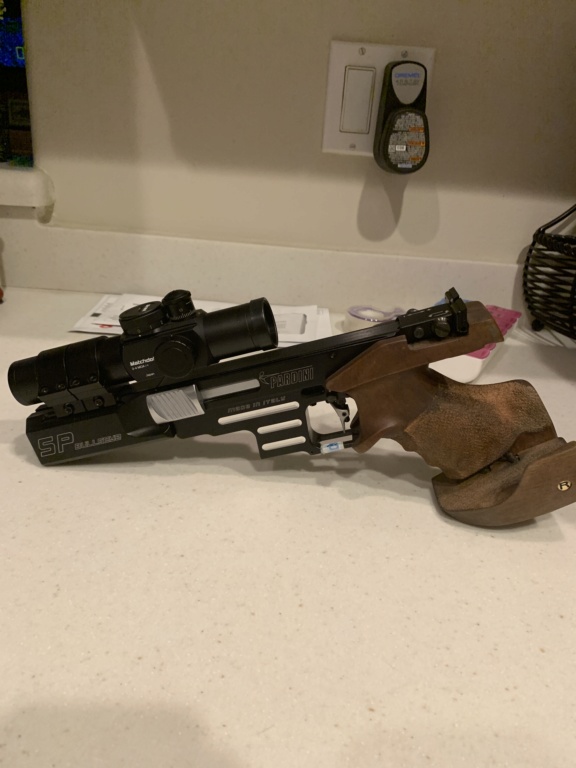 Jim, you have "shown us the groups" and so the proof is clear, but, somehow, your set-up just does not look right!

I guess that aesthetics and, even, mechanical theory, go out of the window when it comes to finding the best possible solution for a determined Bullseye shooter. Well done you! But no, I just can't hang a UD off the front of my Pardini's like that.

One could use that old saying "more power to your elbow!".

Jim, for some of us it's not the aesthetics but the weight distribution.  At 51 you're obviously handling it very well.  At 74 the 6" is too much for me.

Dr.Don wrote:Jim, for some of us it's not the aesthetics but the weight distribution.  At 51 you're obviously handling it very well.  At 74 the 6" is too much for me.

I totally get that Don but just keep in mind a lot of shooters who are in the market for a Pardini reads all this stuff about get a 5 inch and a 6 inch is too heavy makes the decision without knowing the other side and advantages of a 6 inch. There are several 5 inch Pardini’s used for sale over the USA but to my knowledge there is not a single 6 inch.

If you are getting up in age, have strength issues, elbow pain DO NOT by a Pardini!!!! Instead buy a Carbon Fiber Hammerli 280! Lol I loved mine and still hate that I sold it! I hope one day he sells it back to me!

Getting back to the OP's question, and considering the points made for/against by Don/Jim, I think that there is another issue to be considered too.

Before I moved to Pardini's and 32ACP I had a pair of older Walther GSP's. I mostly used Fiocchi factory 32SWL wadcutter ammo. I saw many tumbled bullet holes at 50 yards, not ideal, but the groups were fine at 25 (there are several extensive threads about optimising 32SWL). BUT, the 32SWL factory ammo is very soft and smooth recoil.

When I first got the Pardini HP I bought Fiocchi 32ACP JHP ammo (which usually has to be "bumped" in a press to make it feed reliably). All of the commercially available 32ACP ammo is intended for the personal defense market and is noticeably hot. The recoil is sharp and snappy. With the standard, inclined, Euro style grip I found that it sent a sharp jolt straight along my arm to my elbow and I quickly started to suffer from Tendinitis. I then special ordered "upright" grips from Rink which certainly help in my case. I've tried to find a "soft" recipe for 32ACP, but the best bullets seem to need a fairly hot load.

So, if you are older or relatively weaker or prone to tendinitis, I would say that 32SWL is a better choice, especially if you intend to primarily shoot at 25 yards.

This is some great input all around.  I've also got a custom 1911 45 on the way that should address long line needs if I can do my part. So, I think I'm leaning more toward a the 32SWL since its use will be primarily 25 yds.  I guess golfers would play with only one club they didn't need a full set.  I'm not elderly yet but ain't getting any younger either. 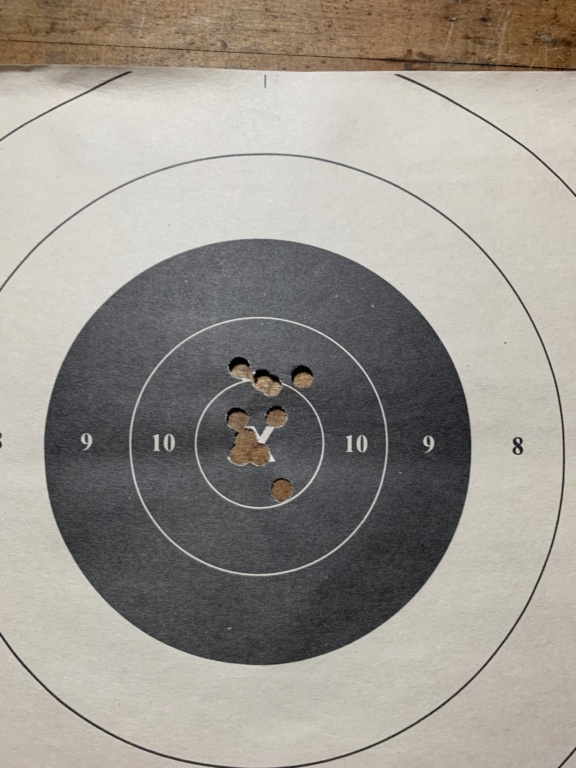 This is what you can expect to shoot at 25 Yards with a S&W Long. This was shot one handed in TF

I didn’t notice if you indicated whether you reload or not?  If you don’t, I would highly recommend the ACP.  I have both, but I reload, and have a swager  to swage the inexpensive and easy to find Speer Plimkers.

In factory ammo, I found the ACP more accurate. If you reload, it’s gets much closer. YMMV

Greg. Which factory 32ACP ammo did you find to be best?

radjag wrote:Greg. Which factory 32ACP ammo did you find to be best?

Best factory ammo is Hornady Custom with the 60gr XTP.

Second best I've seen is the Fiocchi Extrema, which is loaded with the 60gr Hornady XTP.

I have reloading gear but not the accessories yet for 32, or the 32 pistol yet for that matter.  If I decide to get one I'd certainly like to reload for it as the factory ammo seems expensive - at least for practice purposes.  Still mulling things over. What kind of commercially available bullets are suitable for reloading either the 32 ACP or 32 SWL?  In terms of acceptable accuracy to 25 yds.  Also, does anyone cast their own 32 DEWCs for SWL?

James Hensler wrote:Best Bullets are 85 grain XTP for the ACP and Speer makes a 98 grain wadcutter for the SWL and for 25 yards it’s go to go out of the box but at 50 most people swage or (bump up) the bullet to .3145 or so

My results as well re: the 32L (I use cast for ACP).  I usually swage the Speer Plinkers, but they shoot very well at 25.

Using Travis 64-gr coated LSWC bullets (weight sorted into 0.5-grain lots), I got the following at 25 yard results off a rest using my two favorite loads for this caliber (data on image). For the long line, just buy PMC 60-gr JHP (a box of 50 less than $20) and these will hold the 10-ring all day long. You can load the 60-gr. Horandy XTPs with 1.80 grs VV N310 or pay a lot more for factory fodder. I love shooting my Pardini for 2700s. Best, dipnet

Don't know whether your barrel is different/better than the one in my Pardini 5" HP32ACP, but I do not get good groups with PMC. Jon Eulette also commented that he did not get good results with PMC.

I have found Fiocchi 32ACP JHP with the 60 grain XTP bullets (assembled in USA) to be good at 50 yards, but that ammo is very difficult (impossible!) to find at present. Buyer beware - many vendors are advertising that ammo - but it is not true, the current stock is SJHP, made in Italy, with lead hollow point "soft" JHP bullets, in my initial testing it is not accurate at 50 yards.

I now have access to a 50 yard range, Ransom Rest and Chrono, so I intend to do more exhaustive testing of 32ACP in the near future.