This website is all about Bullseye shooting so lets have a NRA Precision Pistol 300pt National Match Course.
Follow the NRA Precision Pistol Rules.
Shoot at any official distances with official targets or scale targets to make it basement friendly for pellet guns.
Week #18 is now open.  Shoot and post your score and information here on or before 6/21/2020.  At that time week #18 will close and week #19 will be open.
Everyone is welcome to join in.  No membership or enrollment needed.  Simply post your information.

Post the following information
Name or forum name:
Date:
Distance: 50/25yard, 25yard, 50 foot, 25 foot.....
Indoor/Outdoor:
Pistol:
Caliber:
Sights:
Shooting aids: (we're here because we like competition, if we need to deviate from the rules to continue to enjoy, please do so.  I would rather have someone with a shake shoot two handed and enjoy, than sit out.  We'll all be there sooner or later.)
Post a picture of the targets if you can.  It's fun to see.
Score Slow Fire:
Score Timed Fire:
Score Rapid Fire:


I'll summarize the results and post them weekly.
If you have any questions, feel free to ask.
Looking forward to shooting with everyone.

Really blew that timed fire. Was clean for the first five, then two sevens and a nine on the second string.
JKR

Notes: This is the second time I have ever fired 45 in sustained or rapid.  Dave Salyer gave me advice - I was doing several things wrong.  The fancy SIG grips came off, and I put sharkskin grips on like he told me months ago.
Slow fire target was also shot at timed fire pace.  Gun was held solidly in my hand, and I concentrated on trigger control, not aiming. At least all the holes are on the paper. 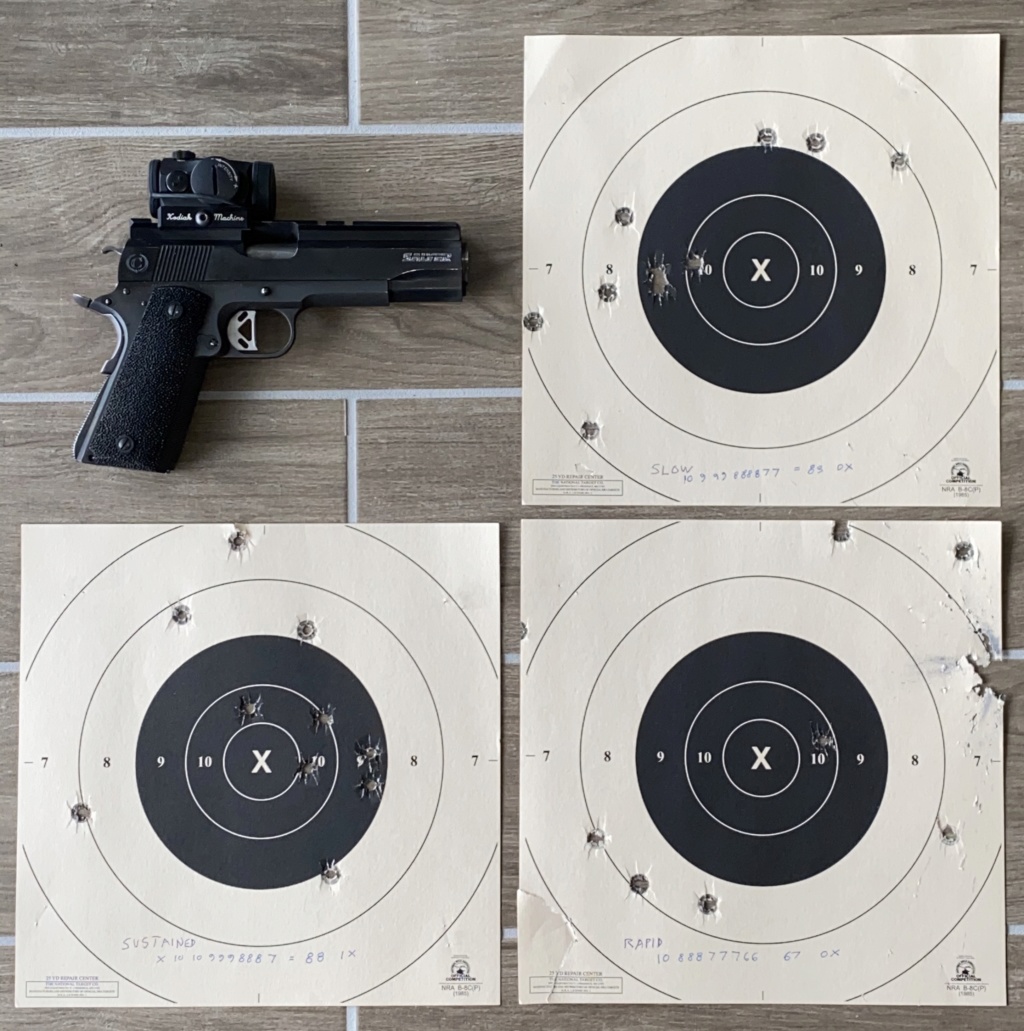 Wow! JKR, I've really inspired you to improve - good - well done. But, not to be too smug, I did shoot these yesterday. The 22 was an equal practise PB for me, but I was quite disappointed with my 45 (the CF was not much better - but there were a lot of interruptions - darn members coming to shoot on MY range!!).

Doubt that I can beat or even equal this again this week, but if I do, I hope that it is at the TCGC Match near Portland on Saturday - fingers crossed! 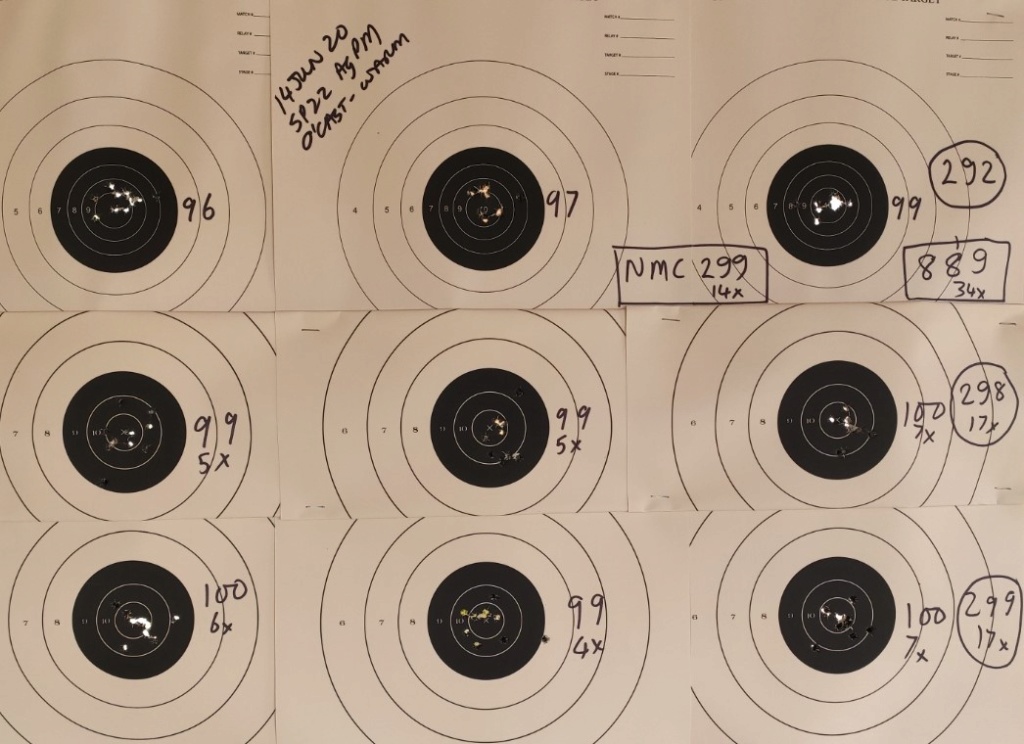 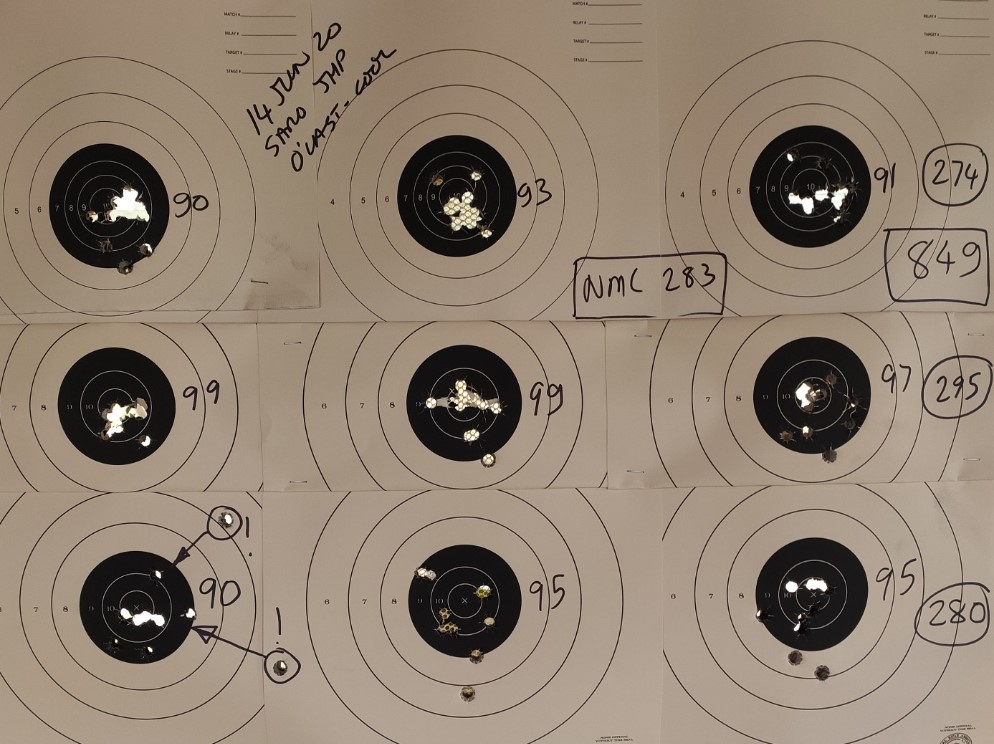 Radjag,
That’s an awesome 22 score my friend! I doubt I could shoot a 299 if I shot all week. I used to shoot in an indoor league that had run since the 60’s. During that time no one had ever shot a 100 on the slow fire target. A 99 is a tough score to beat. I’ve shot a couple over the years but was unable to back it up with cleans in timed and rapid. Well done sir!
JKR

JKR, thanks. But, to be honest, this is just showing off. No turning targets and shot at an incorrect distance. Good practise, but that's all. First Outdoor match this year for me on Saturday. That is when it counts. Cheers.

I'm glad these threads exist, as they got me out of a "rut".  For me, 45 is the most difficult, and then the timed, and especially the rapid fire targets are the most, most, most difficult.  I guess that's obvious....

I wrote to Dave Salyer, who built my gun, and has taught me a lot, and he sent me back more advice.  Today's photos prove his advice helped me.  I may never catch up with the awesome targets I'm seeing here (congrats to everyone!!!) but I can try.  Dave, as in the past, told me I'm wasting my time aiming.  His advice for timed fire is to start applying pressure to the trigger immediately after the previous shot, let my subconscious do the aiming, and to press on the trigger all the way through the shot, so "when" the gun actually fires will be a surprise to me.  (In other words, to NOT try to align the sights on the Bull and try to fire when that happens!!!).  So I went to the range today with more 45 ammo than I usually take, put up blank 8 1/2 x 11" paper for targets, and tried to shoot as Dave suggested.
When I managed to follow Dave's advice, I got targets like this: 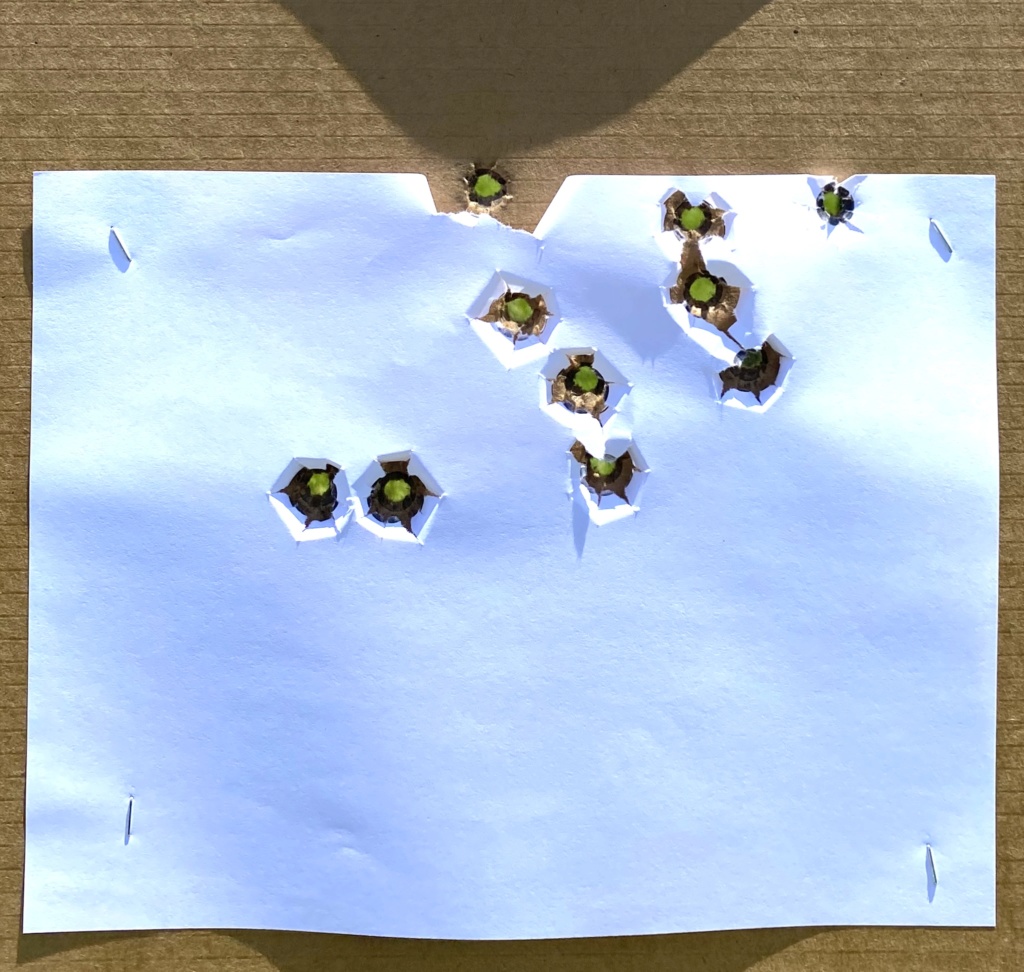 Not sure why the sights seemed to have changed, but after a few adjustments things were fine again.  I figured if I could do this reliably, at least most of my rapid fire shots would be on the paper.  That means a lot more practice.


I also needed to find the best I could do for slow fire, which meant loading one round, taking that shot carefully, then loading the next, and so on.  I only did this once, as my goal for today was rapid fire, not slow fire, but it seemed to me that slow fire should represent the very best of my current capability.  None of these shots were "aimed"; Dave said to just get my wobble area over the target, and not disturb the gun when it eventually fired.  (Dave also answered my puzzle of why I shoot better when I'm not aiming than when I do aim, and once again things worked as he told me they would): 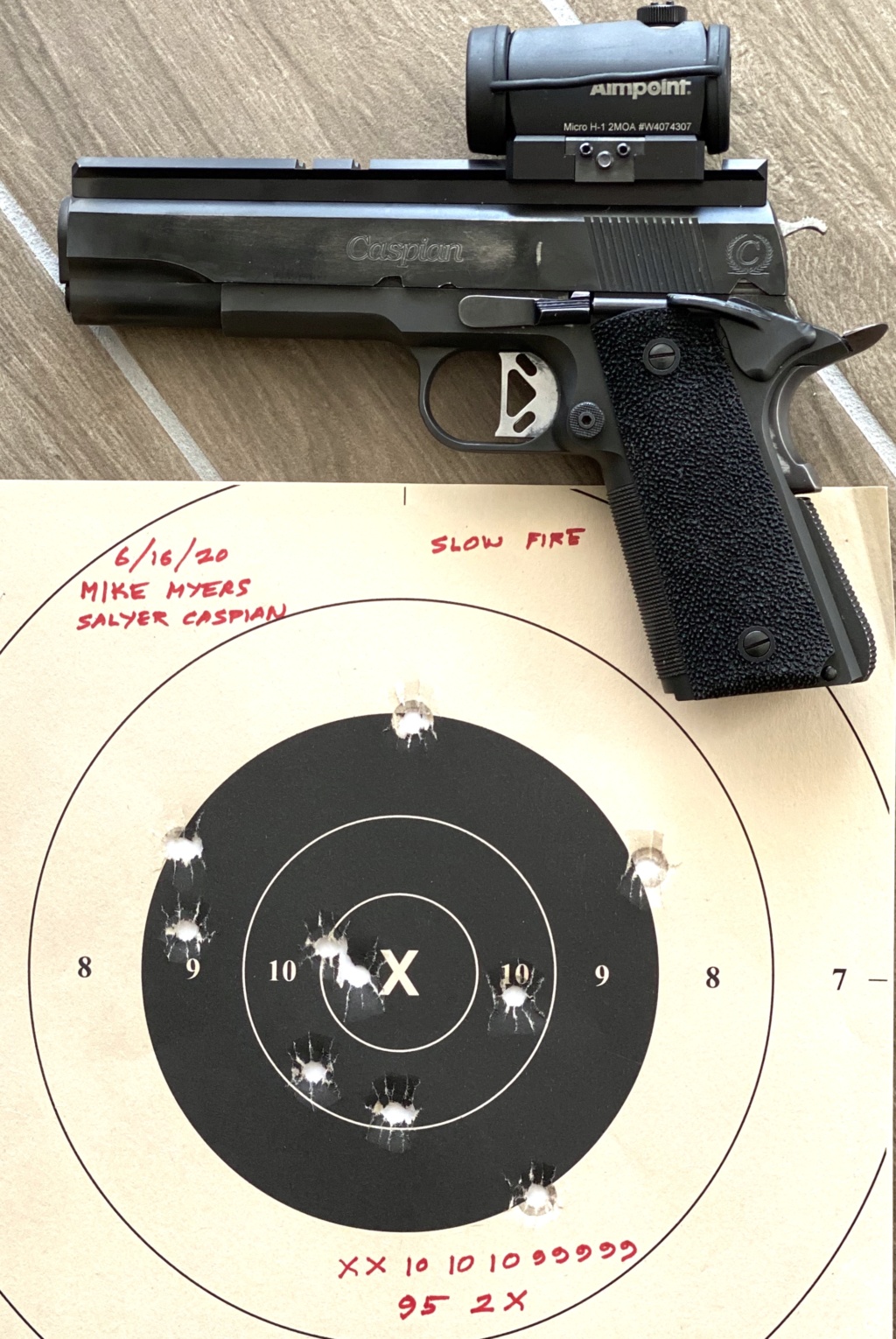 I guess my plan for a while is to go to the range, shoot one slow-fire target, then shoot bursts at rapid fire pace, following all of Dave's instructions.  If nothing else, I'll go home at the end of the day with a big smile on my face.

Good shootin’ Mike! Glad to see you’re having fun with this. Dave is giving you great advise. I’m paying attention to what he’s telling you too.
JKR

Thanks.  Dave's suggestions often sound preposterous at first, but they always work for me.

JKR wrote:Good shootin’ Mike! Glad to see you’re having fun with this. Dave is giving you great advise. I’m paying attention to what he’s telling you too.
JKR

I just posted it.

....to add, I wondered why I had to re-adjust my sights yesterday, when the Aimpoint H-1 has been so good for so long.  Turns out the screws holding the rail onto the slide had loosened.  This is now on my check-list of things to do before going to the range.

radjag, was that second set centerfire with your Pardini HP?

No, sorry, that was with my SARO 45. But my CF card that day was very similar. Struggling with both of them at present.

I attached the data.