I have decided to upgrade my SPE to a new SP.

I will be using it for a NRA (style) 25 yard Bullseye League. Most likely keeping with iron sights, but may go optics at a later (older) date.

My question is: What are the benefits between the 5” or 6” barrels other than one has a longer sight radius and the other is lighter and less nose heavy?

Also, is there any pistol shooting discipline that do not allow one of the barrel length?

I’d double check if ISSF Rapid Fire and Standard Pistol allowed the longer barrel. If you want a longer sight radius, I’d consider asking a gunsmith to make you a custom from sight for a 5” gun. You could easily make a front sight that maxes out the allowed sight radius for CMP .22 EIC matches with just changing the front sight a little. I’m shocked no one has come out with such a front sight yet.

I "think" the gun will not fit in the ISSF box with a 6" barrel.

I have been shooting 5" SP+HP Pardini's for about a year - generally very happy. The other gun I was using for CMP EIC 22 let me down a couple of times and so I decided to buy a new SP 6" and dedicate that to iron sights - worked perfectly and I medalled and legged out recently in 3 consecutive matches. At the next 2700 match my SP 5" inexplicably failed and caused a double alibi - talked to Alex at Pardini, most likely some dirt had dislodged itself and interfered with the trigger mechanism. So I decided to put a red dot on to the SP 6" and use that for the following 2700, last Sunday - worked perfectly.

I am currently concentrating on Slow Fire in my training sessions and decided to try a "side-by-side" comparison of the two SP's. Both are fitted with 1" Ultradot's on Warne Maxima mounts. Identical Rink upright grips. The triggers are both set at just over 2 lbs, but I now find that the 6" trigger needs a bit of adjustment, not as nice feel as the 5" currently. I had 80 rounds of Eley Target left over in my box and used that for the first 8 targets, four with the 5" and four with the 6". Then shot two more with the 5" with Aguila Pistol Match.

The result - average score identical at 94! And the APM cards were also 94! OK, that test is not extensive enough to produce a quantitative result and the story might be different at 50 yards, but does indicate that they are pretty darn close.

Subjective view - the 6" is noticeably heavier and needs a strong forearm, but the recoil is almost imperceptible and definitely an advantage for TF/RF. The 6" seems to bounce straight back on to the target after each shot if the grip is correct, at least for me anyhow. But, my Personal Best practise and match scores are with the 5", so far!

The 6" does not like Aguila Pistol Match, not enough grunt to cycle the slide properly. But APM generally works fine in the 5", unless the gun is dirty and the weather is damp/cool. The Eley Target (and other Eley ammo I've tried) worked fine in both guns, although Target can sometimes be unreliable in damp/cool/dirty conditions. 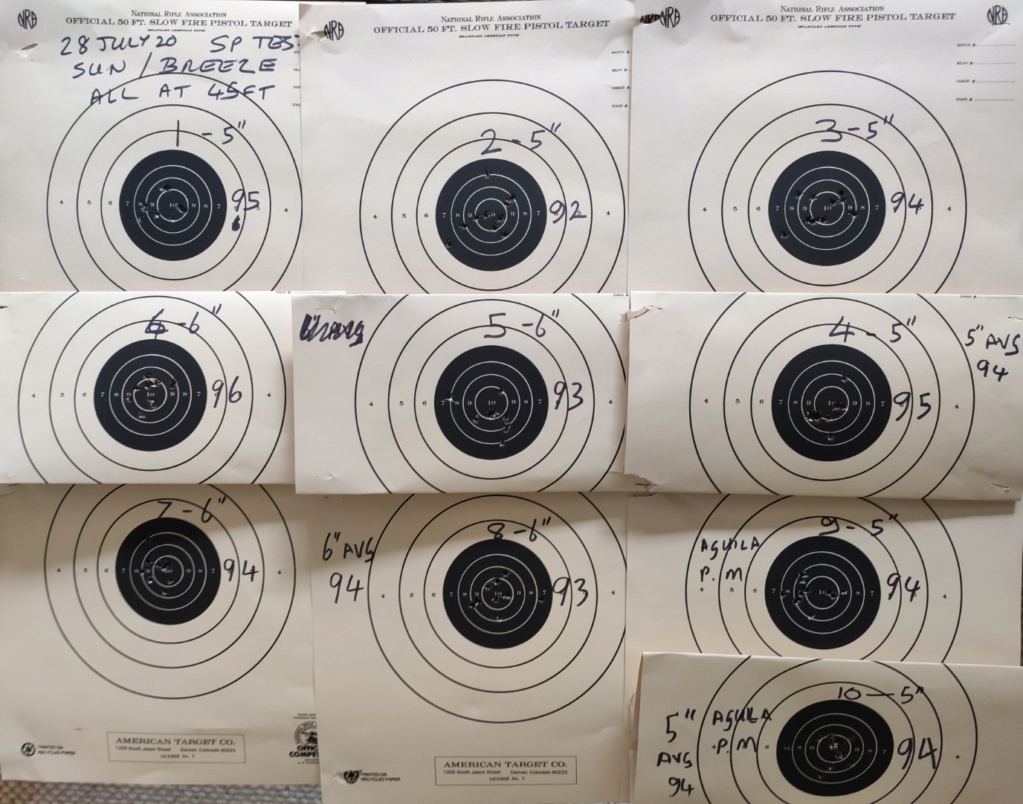