The Fiocchi 32ACP ammo (assembled in USA ) using Hornady XTP 60 grain bullets was well known as one of the few factory loads that could perform well in a standard Pardini HP32ACP. A little sharp, but quite accurate at 50 yards. Jim Haensler (and no doubt several others) have been able to produce reloads using XTP bullets that seem to be as good or better than that Fiocchi ammo, but I have struggled with equipment and various issues, close, but not really satisfied. And, in any case, I have just loaded the last of my stock of Hornady XTP60 bullets. I have built up a stash of Hornady XTP85's, but want to perfect my press(s) and technique before I waste those.

So, prior to the Ohio Swing, I searched everywhere looking to buy Fiocchi 32ACP JHP ammo. The correct stuff looks like this:- 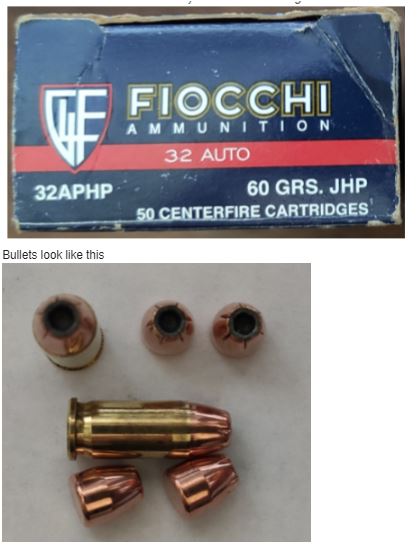 Carolina Munitions was the first stockist I came across - ordered 500 rounds - very poor communications. When it did arrive it was not the correct ammo. Fiocchi 32ACP SJHP. Manufactured 100% in Italy and the "S" is all important. Totally different soft lead hollow point jacketed bullet. Looks like this:- 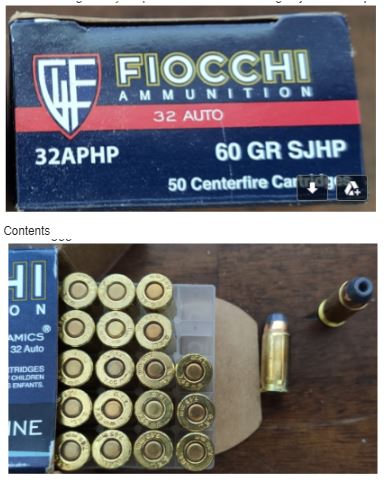 This stuff is obviously intended for the "personal defense" market and is not accurate. Total waste of money for Bullseye.
I tried to contact Carolina Munitions to get a refund. No response to several emails. No phone pick-up. Zero.
DO NOT BUY FROM CAROLINA MUNITIONS!!!!!!!!

I then searched again. I've used Lucky Gunner before and they had stock. I contacted them to check that what they had was indeed the correct JHP ammo - Yes - for sure. Ordered 1,000 rounds. Their communication was excellent and delivery time very good. BUT. Upon receipt it was again that darn SJHP rubbish. I contacted them, instant agreement to send me a shipping label and refund my money. Good service. No problem - will use them again for other products.

Now I was getting desperate, just a few days prior to my departure for Ohio.

Searched intensively. I came across Widener's. I've bought powder and stuff from them in the recent past, seemed like a decent outfit. Called them and explained very clearly what I was looking for and confirmed, repeatedly, on the phone, that what they have in stock was what I want. 100% certain. Arranged for 1,000 rounds to be shipped ASAP to the Cardinal Center, cause I was ready to leave Oregon. It was there waiting for me several days ahead of my arrival. Big thank you to Jim and his team at Red Feather for taking care of me. But, Oh NO!!! It was again SJHP. Eventually I got a shipping label from Widener's and it has been returned. Decent service, but not as straight forward as Lucky Gunner.

That really left me in a pickle cause I shot most of the last of my Fiocchi JHP at Bristol. But Red Feather found what was probably the last surviving two boxes of original Fiocchi Extremma JHP (in nickel brass) from the Larry's stock. Thank you Larry (RIP) and Red Feather!

Now, I have to admit that even though I was able to gather enough good ammo for the CF SF stages of all three events, I did not really do that top ammo justice - Boooo!!!

It now seems that Fiocchi is not producing the good stuff any longer and Hornady have stopped selling their XTP60 bullets via retail.

Sorry to hear that.  I figured a lot of what was "in stock" was the wrong bullet.  I just received 1700 of the 85 gr XTP's after talking to James and others here.

radjag wrote:..........Jim Haensler (and no doubt several others) have been able to produce reloads using XTP bullets that seem to be as good or better than that Fiocchi ammo, but I have struggled with equipment and various issues, close, but not really satisfied. And, in any case, I have just loaded the last of my stock of Hornady XTP60 bullets. I have built up a stash of Hornady XTP85's, but want to perfect my press(s) and technique before I waste those.........

Lots of things you can't control, but it's likely people can help you improve your own reloading issues.  What press do you have?  What dies?  Can you post photos of the rounds you have loaded, and explain what needs to be improved?   (I did this years ago with 38 Special, and got tons of good feedback - eventually, the rounds I was reloading got more than good enough for my purposes.)

I had lots of "issues" with my 45ACP as well.  I wanted to use a combination seater and crimping die, and eventually I was talked out of that.  It got to where my rounds wee coming out pretty good, but then I asked Jay and Don at Redding for help - they got me to switch to Redding, and Jay built a custom "seater" for me, shaped perfectly for my Magnus #801 bullets.  Now the rounds come out looking as pretty as brand new Winchester rounds.

You may not be able to control what ammo other people sell you, but you can fully control what you load yourself.

Also, while I know nothing at all about the ammo you're using,  you could call Terry Labbe from Magnus Bullets, describe your issues, and see if he can make something that works better for you.  He participates in this forum, and he's a goldmine of great information about reloading and a lot more.  He's extremely busy right now, overloaded with orders, but maybe the can fit you in anyway, as he did for me.

Go to ammoseek.com and search for Fiocchi 32ACP. Two vendors have the FI32APHP 60 grain hollowpoint in stock. Two others have the soft point one and a 5th one doesn't specify which it has

Lin - Thanks, but I used Ammoseek the last time I was buying. Unfortunately it is hard/impossible to get the vendors to go and open a case and check what version they have. I bet that all of the offers on Ammoseek are actually SJHP. That S is the critical difference.

Mike -thanks. I've consulted several experts and have solutions in hand.

Following Lin's comment I took a look on Ammoseek. The search result has changed considerably from a few weeks ago. Now several vendors are specifically listing XTP60 versions (Including Lucky Gunner who now have separate listings for SJHP and JHP). Good! 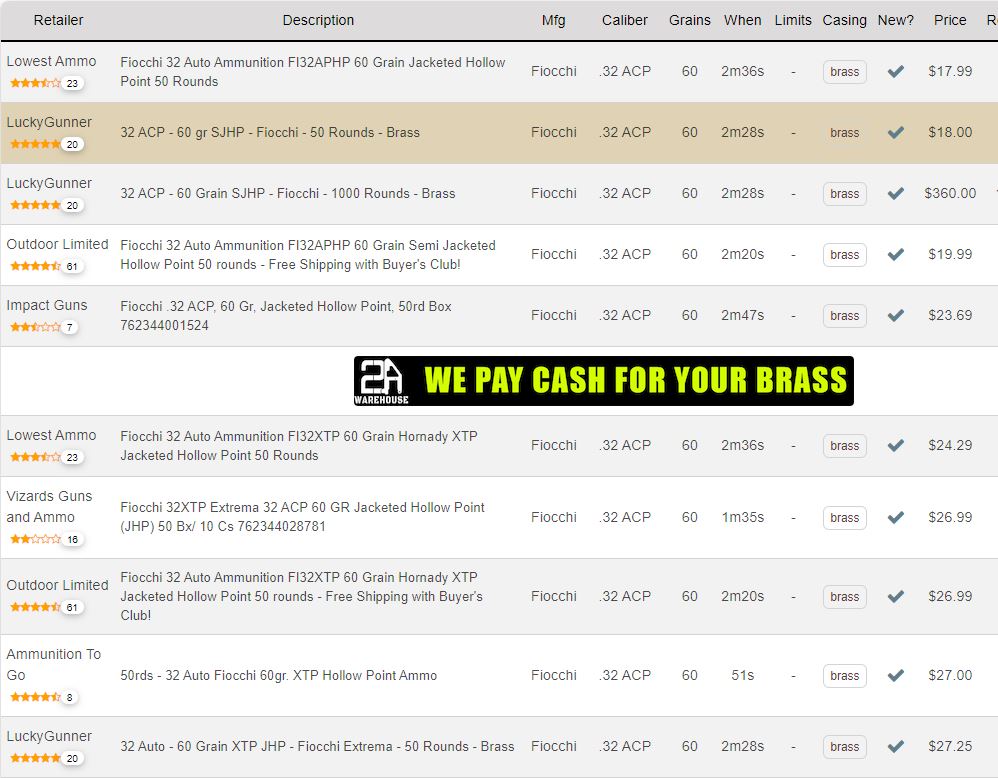