I’m curious, having never held or fired one before, how accurate is a stock out of the box S&W Model 52? I know nothing about them really but I’m curious. Those of you that are more acquainted with such a shooting iron, please share your opinions on its quality good or bad and shooting capabilities and characteristics please.

I have had 4 of them, very nice trigger if you like crisp, ergonomic grip but they are slippery. Sights are good, balance is good. Recoil feels... weird to me. The slide movement always seemed sluggish, and my sight picture recovery slow compared to a 1911 in any caliber. Nice guns, cool to have and fun to shoot but not really my cup of tea. I was never terribly impressed with the accuracy either. YRMV.

The model 52 was designed for the bullseye shooter.Out of the box,trigger pull is 21/4 pounds.The 52 shoots a 148 grain wadcutter bullet.2.7 grains of bullseye is almost a universal load.The thing about the 52 is you have to follow through on the shot.All in all an extremely wonderful,accurate gun.I have 2 of the original model 52's which can be adjusted to shoot double action also.The 52-1 took this adjusting screw out.

This is from my 52.  Shot while it had iron sights. 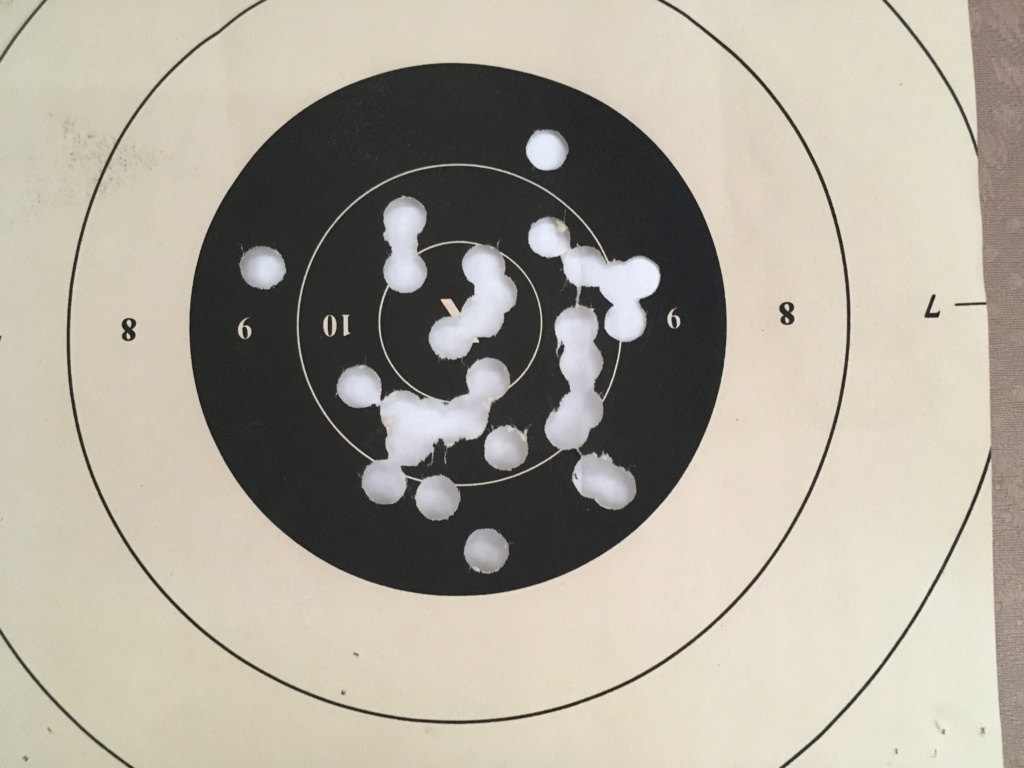 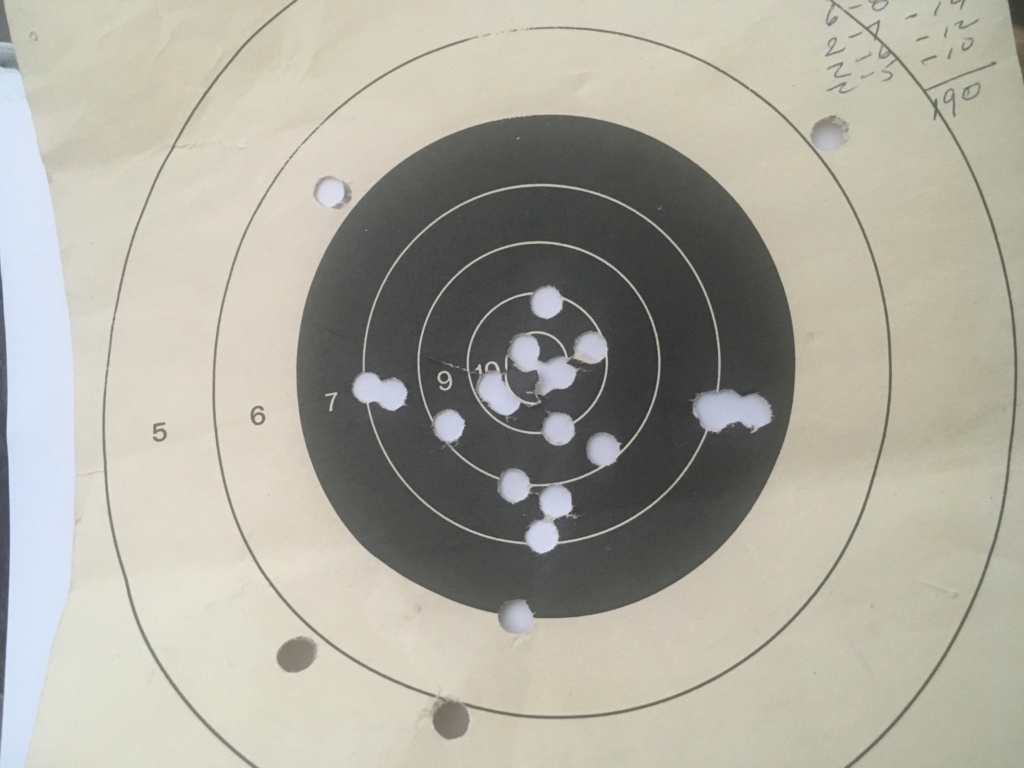 This is shot with a reflex dot (so I don’t have to re-spring the gun) anything outside of the 8 ring was a bad shot.  All at 25 yards.  I have been told that not all 52s are this accurate.

As for their “feel”, it is different than a 1911.  It is softer.  They do require a excellent shot process and only crisp triggers are advised.

So what's up with the 52? I have heard people say that the 148gr WC bullet itself just isn't stable out to 50 yards. I have seen minor keyholing at 50.

So after 30 years, it got relegated to second fiddle behind a Pardini 32acp. I took the 52 out yesterday, for the first time in years, to shoot a 25yd short course. Didn't do so well. Maybe someday, I'll get to shoot it in a Ransom rest.

This timed fire was shot at a match in Jacksonville. I was using my S&W 52-1 with open sights and factory match .38 SPL ammo. To me the gun seemed to be unforgiving of poor follow through. 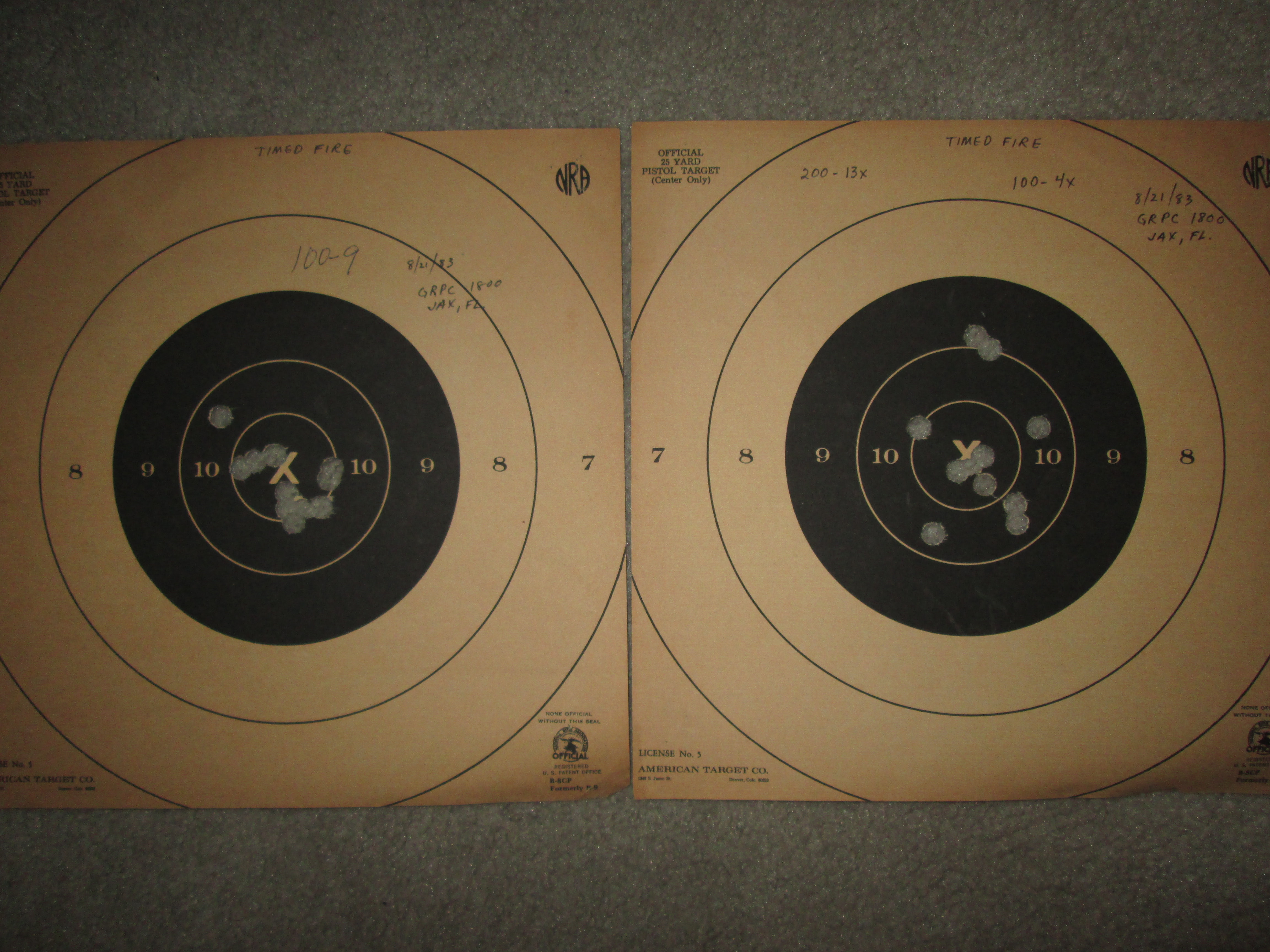 I love my 52s and shoot them well.

I like shooting my 52. If you do everything right, it will reward you. If not, it will punish you (score wise) But they are fun to shoot. interestingly (to me anyway) is that I was told shooting one would ruin your 1911 shooting. I found it to be the opposite. The discipline it requires helped me with my other shooting. They are not for everybody. Perhaps you know someone who has one who would let you try it out. (That's what got me started on one)

As stated above, these are accurate guns but not forgiving.  Your fundamentals have to be spot on.  Some people attribute this to the low velocity of the 38 wadcutter, but I'm not so sure.  The factory barrels have a 1-18 twist and are .355 bore.  I put in a Clark barrel which is a 1-10 twist and .356 bore.  That stopped the keyholing and improved accuracy just a bit.
This is an expert's gun, not a beginner's gun.

Where do you shoot in Naperville? I built a house on Cascade Court off Bailey in Winding Creek. Live in 7 Lakes Apartments in Lyle while it was being built. Daughter went to Lincoln Middle School and Naperville North High School. Then I got divorced and moved downtown where I built a town house on Maude, off Sheffield. Left and lived in LA and TN and then moved back and Joined and build a house in Stone Bridge Country Club.

Enjoyed 11 years in and around the Chicago Land Area - Was a part time flight instructor at Clow Airport for all of those years.

rkittine wrote:Where do you shoot in Naperville? I built a house on Cascade Court off Bailey in Winding Creek. Live in 7 Lakes Apartments in Lyle while it was being built. Daughter went to Lincoln Middle School and Naperville North High School. Then I got divorced and moved downtown where I built a town house on Maude, off Sheffield. Left and lived in LA and TN and then moved back and Joined and build a house in Stone Bridge Country Club.

Enjoyed 11 years in and around the Chicago Land Area - Was a part time flight instructor at Clow Airport for all of those years.

I shoot in various place, none actually in Naperville. There are active Bullseye leagues in Chicago area both indoor and outdoor. I am in Maplebrook II, right next to Winding Creek.

I have two 52’s and love to shoot them. The need for good follow through has made me a better shooter overall.

99% of the 52 targets I see at 50 yards have tipped bullets. In my experience shooting them, I've never gotten them to shoot a good 50 yard target. I think they need a different twist rate to come close to what a 1911 will group. Unless your willing to rebarrel your chasing your tail.
Jon

They are a rabbit hole. I had one,  tested and used it like mad,sold it to focus on 45. Bought one again, back down the hole.

Jerry Keefer did a lot of study to develop Amira's gun. Lots of stuff isn't right with them bore and twist being only one issue.

Go faster at low pressure for one thing, reswage your bullets for another. 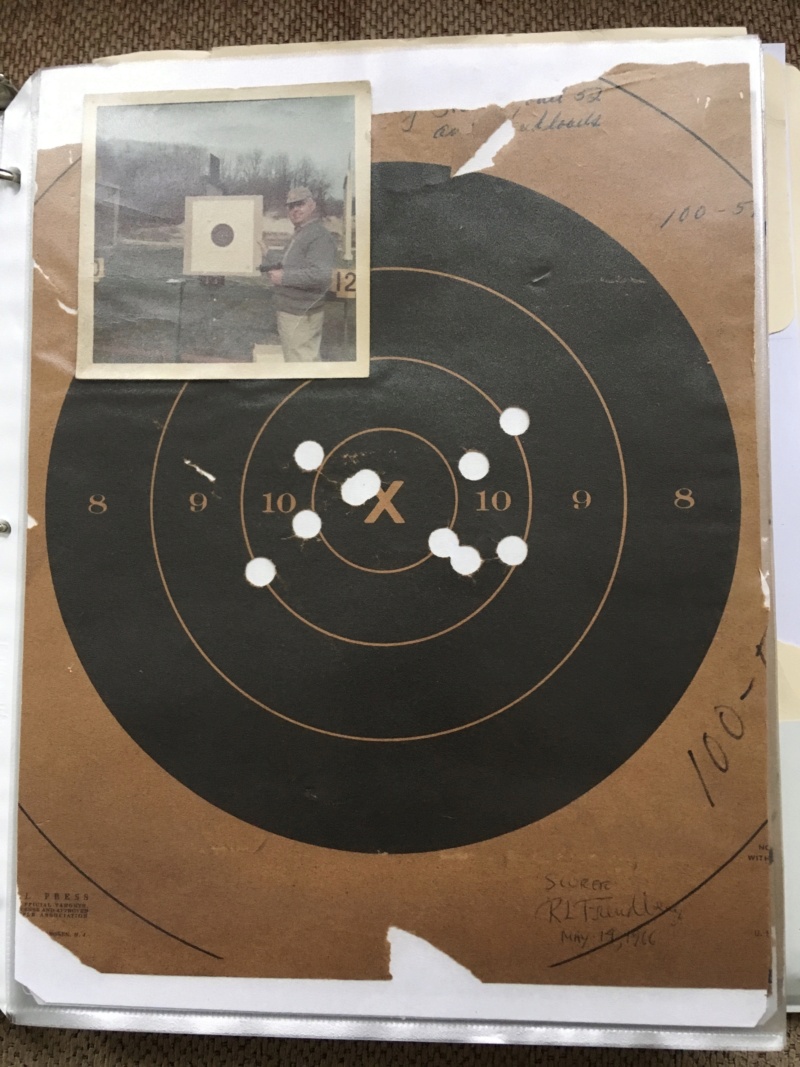 Love mine, but only a novice with it. Great fun to master though!

Thanks for all the input so far guys.

I don't know about one version being more accurate than another.  I have the 52-2.  It shoots quite well.  If a shot is not in the ten ring its on me.  I read somewhere that the 52-2 has an improved extractor over the earlier versions.

From what I’ve read about them they were each assembled by hand.  So there was very likely some fitting involved.  Then they were tested and had to “hold the ten ring at 50 yards”, which was 3.39 inches.  Most held 2 to 2-1/2 inches.  But some assemblers were better than others.  Whether standards were held throughout the production run were held, I can’t say.  And just because the craftsman is old doesn’t make him better than the youngster, but they were different.  The reason the 52 went out of production was the tooling wore out.  When they re-introduced it as the 952, the gun was produced at the Performance Center and seemed accurate.  Us 52 shooters were hoping the 52 would be returning but that wasn’t to be.  So the upshot is that the early “A” prefix guns were LIKELY slightly better, but you can’t guarantee it.

Jason, you’re at a level where you might find the 52 fun but not a serious gun for matches.  I’d bet you that even with A “good” one your “X” count at 25 would suffer and you might lose a few points at 50 that you wouldn’t have with a 45.  But if a 52 floats your boat, who am I to stand in your way. 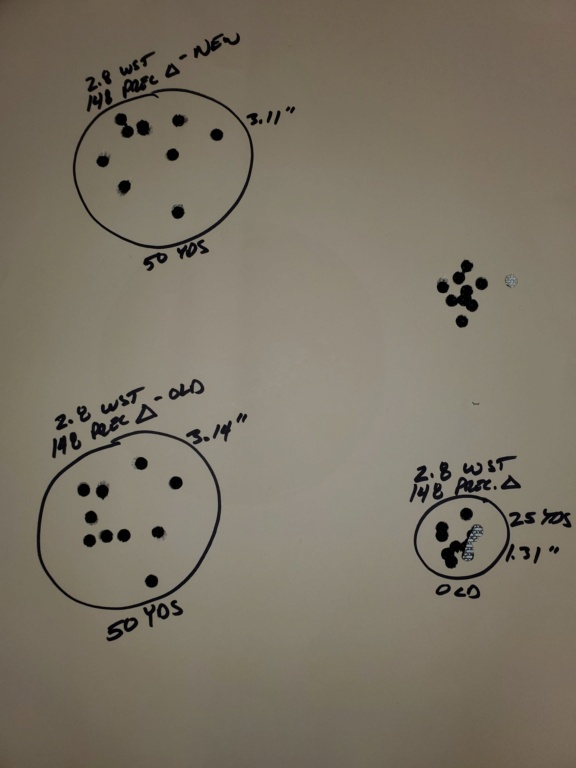 The 52 was indeed "hard" fitted by hand and has a fitters stamp to identify the fitter on the  on the mag well opening.  If it didn't pass the accuracy test it went back to the fitter for rework until it passed.  It was basically a custom built gun and very labor intensive.  My father was the first and only fitter building them when they went into production, his fitters stamp was the #2.  The 52 production was under his supervision until he retired in 1988.  It was discontinued a few years later mainly because S&W lost money on every 52 they made because of all of the hand fitting.  According to my father not more than 10 fitters in total built the 52's throughout the product lifecycle.  I have a printed copy of the fitters operations that explains how they were made.  If I can find I'd post it up if anyone is interested. 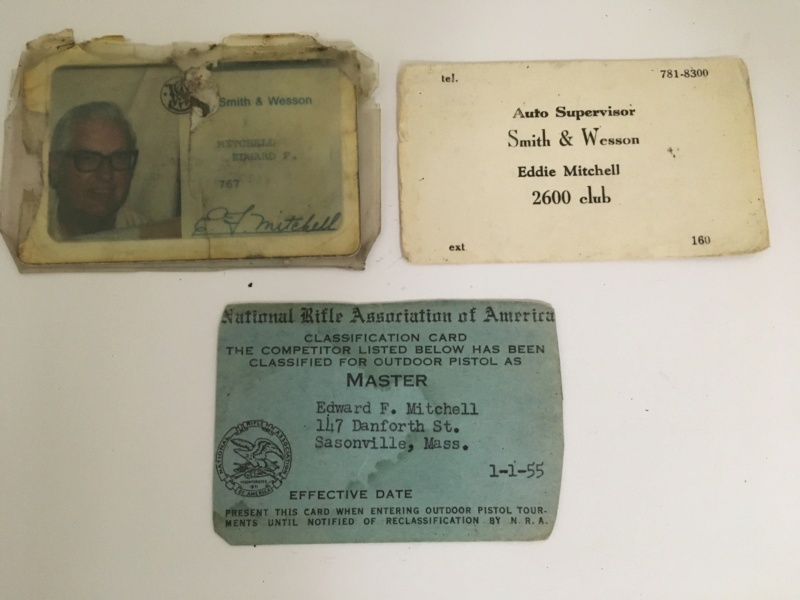