Hi all,  thinking about a new gun for indoor 50 ft. bullseye.  Will want to add a red dot.  Thinking between a S&W 41 or a High Standard.  The High Standard model that Mike bought a while back.
They both weigh the same.  Same grip angle?
What's everyone's opinion?

Between a 41 and High Standard, I would go with the 41. HS magazines are such a pain to make work and keep working. I have both but shoot the 41 more because I have a red dot mounted on it. Both have fantastic triggers.

I am quite fond of a S&W Model 41 as an iron sight gun. To put an optic on it makes it too heavy for my liking though. To balance that out I've seen some guns that had the barrel reprofiled - a lot of metal was removed from the barrel to make it more streamline. Its a nice modification but it's permanent. I would have two barrels. One modified for optics and one left alone for iron sights.

I used to own a High Standard too. I liked it plenty and very much liked how the barrels could quickly be switched with the press of a button. A M41 isn't much different in that sense but a High Standard can be set up with two barrels a lot easier. Brownells sells an aftermarket target barrel and optic mount. No machining needed. I used to have such a rig. It was a pretty nice gun and plenty accurate but I didn't shoot it the best.

Personally I eventually settled on a Nelson with two barrels, one for irons and one for an optic. And over the past year have been toying with a Hammerli Xesse. All are good options. It really just depends on what you as a shooter gravitate towards.

Get a 41 and mount the scope where it is supposed to be.

There are a lot of ways to do that. 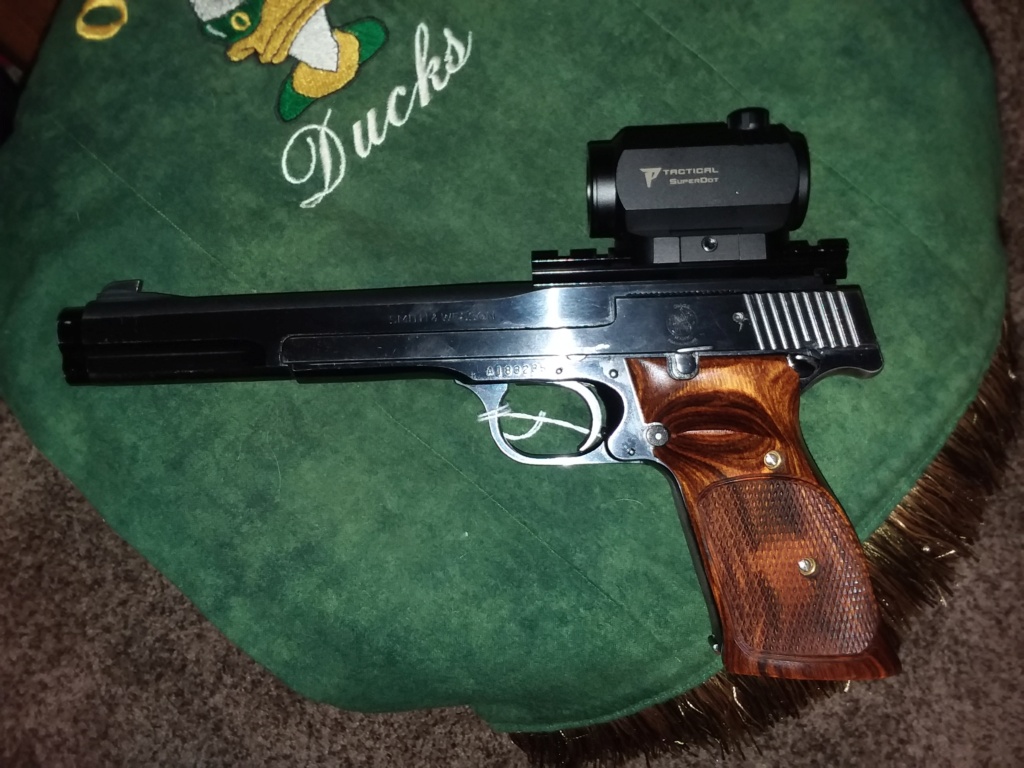 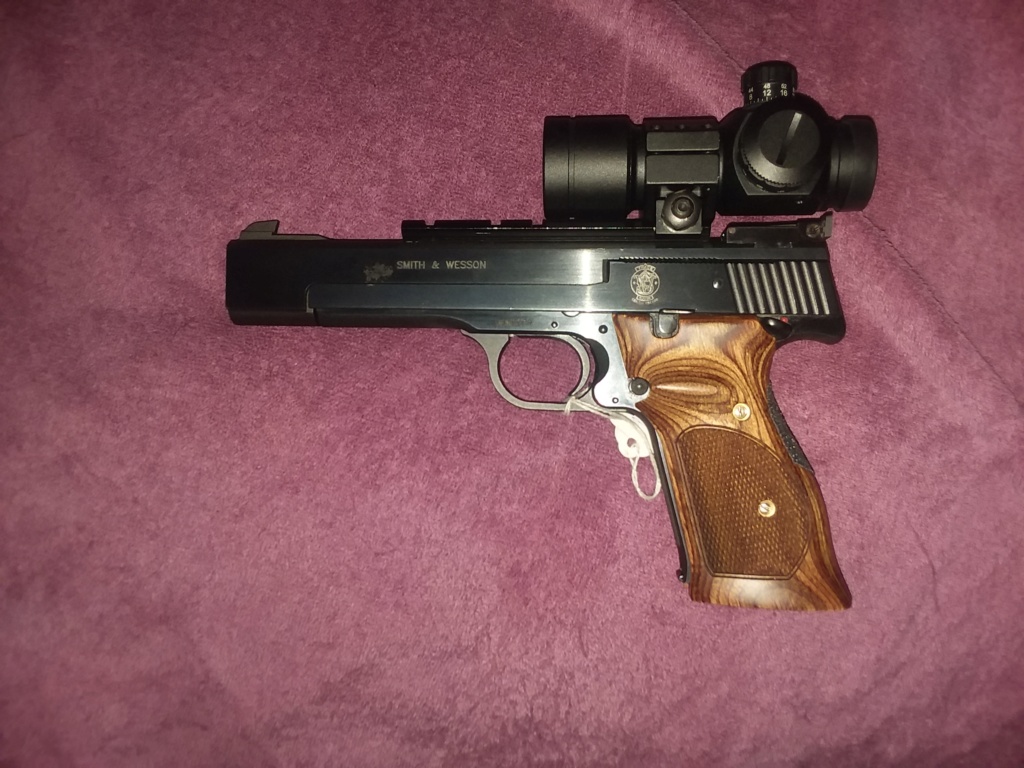 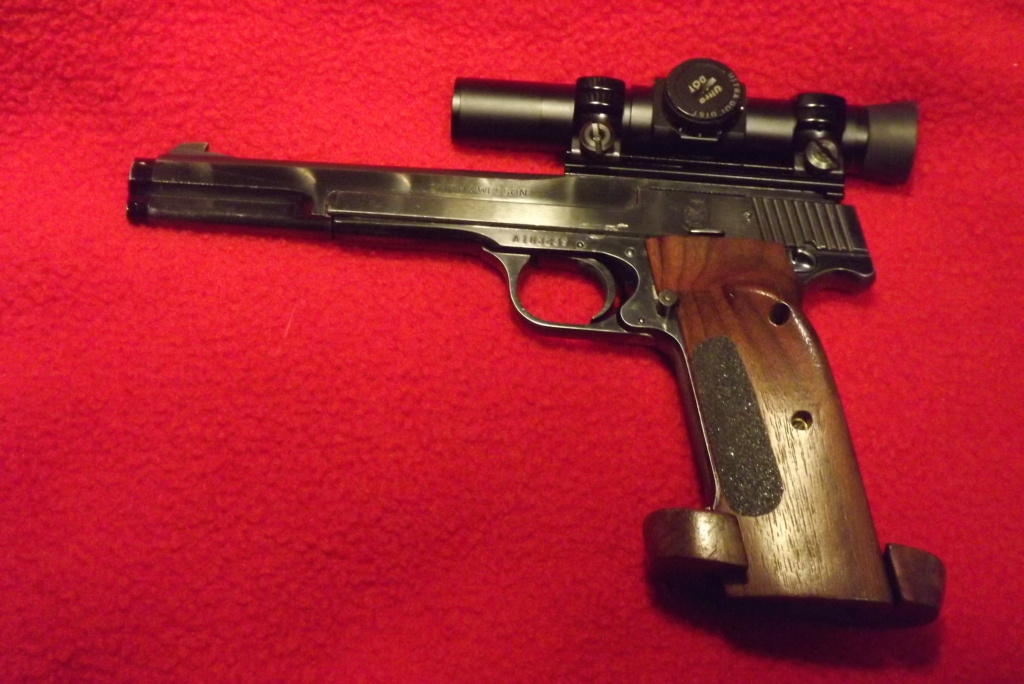 I've got a Model 41 with Clark barrel with rail (for sight), a Nelson kit waiting to be installed on "something", and three High Standards.  The first was an older model, a #103 with lots of modifications.  Having owned the 41 since the late 1970's or so, I wanted to like it more - but every time I shot both, the High Standard was better for me.

I decided to get a newer High Standard, and agreed to buy a Victor from Roddy Toyota that he had gone through and improved.  At the same time, I was corresponding with Alan Aronstein about his new X-Series gun

With so many years of production, and so many models, I'm in no position to comment on them - seemed to me that if I was a collector, I would enjoy owning more.  Then both of the new guns arrived at about the same time.


In every way I care about, Alan's new X-Standard is the most trouble-free and precise 22 I've ever shot.  That includes Volquartsen. Maybe it just fits my hand better, but what's most important to me is that it's a brand new gun, all new parts, made by the same gunsmiths that have spent their lives with High Standard.  With the new CCI ammo, it has been 100% foolproof.  It has no failures, period, excluding one round that we decided had no powder in it.  It's got a full warranty, and Alan tells me he stands behind them.  Very important to me, it can be endlessly dry-fired as much as I want, without causing any damage.  I can't do that with either of the other High Standards, and despite people telling me I can dry-fire my 41 as much as I want, I'm always just a little concerned.

Weight and balance are important.  I've held some guns that feel incredibly light up front.  My 41, with heavy Clark barrel and a good sight feels "heavy", but not overly so.  The X-Series felt very light, and then I added the barrel weight at the front so it felt balanced better.  The trigger on the X-series is better than any other gun I own.  Finally, the X-Series had the best balance for me....    but the balance of a Nelson would be more like that of a '45.

Nothing is perfect, and I do have one gripe about the X-Series, but it's more so about me.  I'm not strong enough to easily rack the slide.  I don't get a good grip on it.  Alan sold me an add-on to correct this, so it's no longer an issue, but with a red dot sight on top, there just isn't any way for my hand to get a good grip on the slide.

Alan offers two types of rails - the one I asked for positioned the red dot sight as low as the custom rail that Roddy fabricated for my Victor.

Alan also uses some "funky" kind of black teflon (?) to cover the parts - according to Alan, it is something that will never wear off.

When/if the virus ever leaves, and my club starts holding matches again, the X-Series is the gun I plan to use.  I ordered two extra magazines, just so I can always have a loaded magazine available if needed.

As to price, early this year I paid $1,200 for mine.  Last I heard, Alan had a collection of guns he intended to take to Perry, but that event never happened, so he has (had?) extra new guns readily available, but this is weeks-ago information.


I like my 41, but it's a very old gun.  If I didn't have it, I wouldn't plan on buying a new model.  Just personal preference.
The Nelson is maybe the best choice of all, assuming you already have a lower to mount it on - and then you'll have the same trigger for different classes.
I got serious a while ago about buying a Pardini, but then talked myself out of it.  The cost was a big factor.
The top of my list is still the X-Series, but there are so many people here who can give you a more meaningful answer based on their knowledge of Bullseye.
The X-Series is my favorite, for *ME*, but my match experience is limited to monthly matches at my club.

I'm going to side with Jim Steele on this. Obviously I'm ignoring the significantly higher cost - please excuse me for that. I've never owned or fired a 41, shot HS's 40 odd years ago, but have no desire to own one now.

The Pardini has two significant advantages over most of the other options:

Firstly - the fully adjustable trigger (which I find to be a major challenge to adjust well - I must admit!).

Secondly - there is almost negligible recoil. If you've got a decent grip the gun just seems to "flop" back on to the mark after every shot in TF/RF. Excellent.

If you prefer more upright "1911" grip angle (I do) then Rink can supply a "GSP style" upright adjustable grip - yes, I know, more significant expense, sorry.

Out of those 2 I'd probably pick a 41, I've owned both.  The HS's are more accurate, but magazines are an issue.  The stock 41 has a plentiful supply of magazines but the barrels/chambers are crap.  The 41 barrel issue could easily be rectified by sending it to David Sams for a barrel liner, it'll come back more accurate than anything else currently available.  There are nice grip options available for the 41.

I personally would recommend an all-steel 22 conversion.  My lower was built by the same guy as my wad gun, they are virtually identical and promote consistency.

I saw the title of the thread and was just going to say "yes" that being said I have a model 41 and I really enjoy shooting it.  I have shot some HS victors and they are nice pistols. If I was going to start from scratch I think I would buy a Pardini though, one of the guys that I shoot with has one and he is always better than I am, although I hate to admit it I don't think it is the gun.

So the reason why I started this post was I was thinking it would be good to start using some anatomical grips.  I have had a few 22s and out of all of them I have kept a Ruger Mk II 2245. I like that gun so much that I bought an identical pistol.  Trouble is you really can't do much with the grips. I shot it for the first time today.  It's been 7 months since I shot it and did ok with it today.   Guess I had that new gun urge. lol
Definitely like the Pardini trigger.
I also have an Xesse now.  I have a love/hate relationship with it.  I will post a pic of how I mounted my red dot on it in case anyone is interested.
Thinking I will shoot the Ruger for awhile and see where my scores are.
Thanks

I've also got a Clark Custom Ruger MKII, it's incredibly accurate and reliable.  They did a sweet short roll trigger. 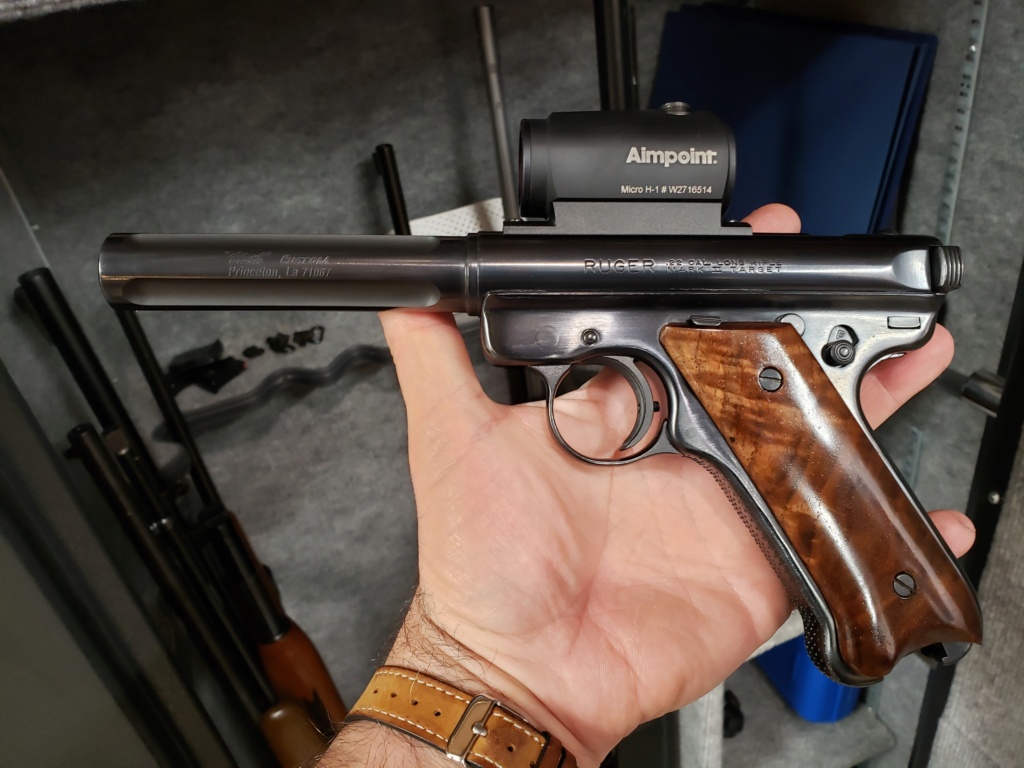 I posted a pic of my Xesse in the classified section.  It shows how I had the base mounted.
My Ruger has a Clark barrel like yours Steve B.  Did you lighten the barrel or did Clark do that?

285wannab wrote:I posted a pic of my Xesse in the classified section.  It shows how I had the base mounted.
My Ruger has a Clark barrel like yours Steve B.  Did you lighten the barrel or did Clark do that?

Clark fluted the barrel, it's a Lothar Walther.  They did a beautiful job on this pistol, I prefer to shoot my 22 conversion so it sits in the safe.

Just another $.02. It is possible to get a very accurate, extremely reliable match 22 that won't break the bank. I know 285 wannab has made up his mind, but there might be others watching this thread. This is a current production Browning with parts readily available including mags and grips from 40 years of production. They also come with scope mounts. 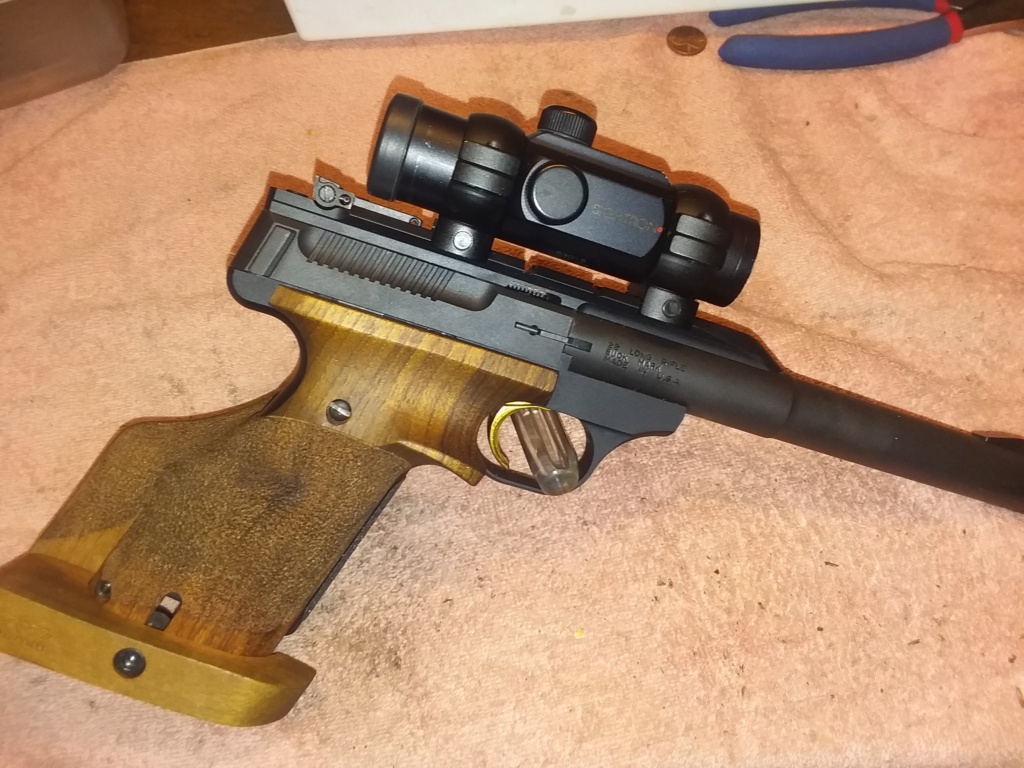 This is a 25yd 10 shot group. I must have hiccupped to get the stray. 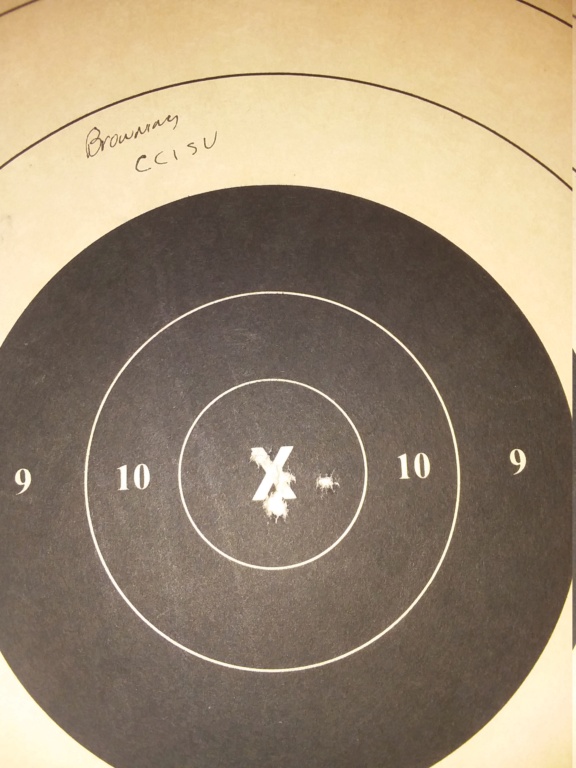 I have a M41 and a (Hamden) High Standard Victor.  With the same red dot mounted, my Victor is 2 oz heavier than the 41.  Probably 1 oz of that is because I'm using a grip mount for the Victor.

I've purchased 2 older magazines (but not original to the gun) for the Victor.  I was able to adjust them both to work reliably.  The Victor has the best trigger I've ever used.

Nothing against the Brownings, but it seems fewer people around to work on the trigger.

Since I'm spending your money, I'd get a Pardini.  But if spending my money, it just seems that there are so many other pistols that will keep it in the 10 ring.

Buckmarks are great if you can work out the trigger, and find the barrel that balances best for you.

The 41 is a spectacular pistol, if it fits you, and you like the weight with the grip angle.

High standards are also spectacular if you don't mind the maintenance and the less than user friendly complete disassembly.

Sig hammerli I have have a fondness for with the Larry trigger, and a clearanced trigger guard. I personally don't mind the plastic mags.

The Benelli is nice, but parts are a pain to get these days and magazines are pricey, not as bad as Walther mags though.

I guess the best advice is that they all have positives and negatives, it really boils down to what fits you best.

Similar topics
» Training time vs match time
» Question for guys using stainless pin tumblers.
» Time to remove the old Bo-Mar
» time to do something with the .45... advice??
» First time at Perry - Wow