A few days ago I ordered a 1911 Grip Adapter (Straight Mainspring Housing type) from CMM Shooting Sports for a Hammerrli Trailside pistol. Today it arrived. I wanted to share some info and thoughts.

First, I was very pleased with how fast CMM Shooting Sports processed my order and got this item to me. I placed the order online on Monday around 4:30PM and it shipped the next day. I received conformation emails for having placed the order, and again when the package had a tracking number. Today it arrived. I didn't wait long at all. I understand shipping time may vary depending on where someone lives but for them to get on it and put the order in the mail the very next day made me happy.

The item and packaging is simple. A plastic bag contains the grip adapter (and screws), an allen wrench, a set of Herrett 1911 wood grip panels (and flathead screws), two pre cut pieces of grip tape for the back and front strap areas and a piece of paper with some product/user information.

CMM Shooting Sports sells these grips adapters for the Hammerli 208 and Trailside but they do not list a version for the Hammerli Xesse model. Now I own an Xesse model. I have never owned or had a Trailside handy to examine and compare to an Xesse model but my understanding is that the Trailside and Xesse are basically the same gun just an updated model name and maybe some minor changes... I don't know for sure really but in the hand I hear they handle the same.

Something I kept in mind while working: I wanted to file a little, check for fit, and repeat until completed. If I were to file too far then these grip panels would probably fit loosely and the whole product ruined until I could come up with a suitable filler to correct the mistake. But I was careful and I found where I needed to be and they are on the gun tight.

EDIT: If i had taken the time to actually read that piece of paper I would've seen that fitting the grip adapter halves to the frame is not uncommon and apparently somewhat expected.

Another issue I had was the left side 1911 wooden grip panel. It comes with a recess for the Trailside's slide catch/release but it needed to be recessed further for my Xesse model. The grip panel initially pinned down the slide catch/release and prevented it from functioning. A small amount of wood removed carefully solved this issue but created another to be mindful of I'm afraid. This relieved area left the wood very thin. I suspect it is now a high risk area for breakage in the future if not careful.

With the grip finally installed and the gun functioning correctly I installed the grip tape. The gun feels nice in the hand. It mimics the angle of the 1911 but doesn't make the gun feel like a 1911. It's still a pivoting trigger. And this grip adapter is very squared off and blockish. Rounding the corners and edges with a file might be something I attempt in the future but for now I'll just shoot it as is and wait to see what happens. I also noticed that the gun sits very low in the hand and the slide is very close to rubbing on my hand as it cycles. I'll have to shoot it some to see if it's an issue. If it is I will have to figure out a beavertail solution of sorts. CMM Shooting Sports sells a beavertail for a Hammerli 208 but not for a Trailside/Xesse.

The grip that came on my Xesse originally was a red and black plastic molded target grip type thing that really didn't fit my hand the greatest. It was usable but took a lot effort to keep a consistent grip. The 1911 grip adapter makes things easier for most any size hand. 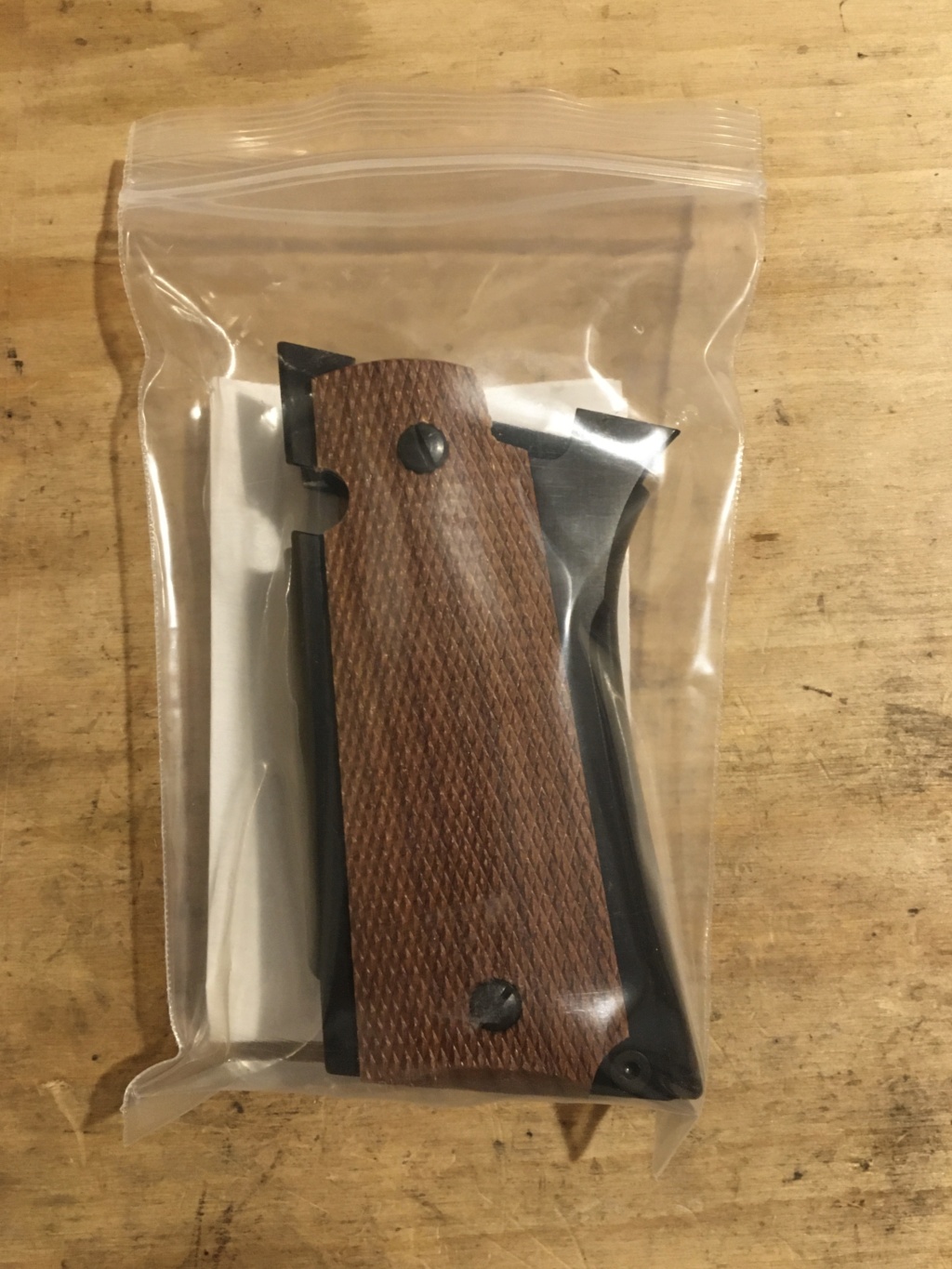 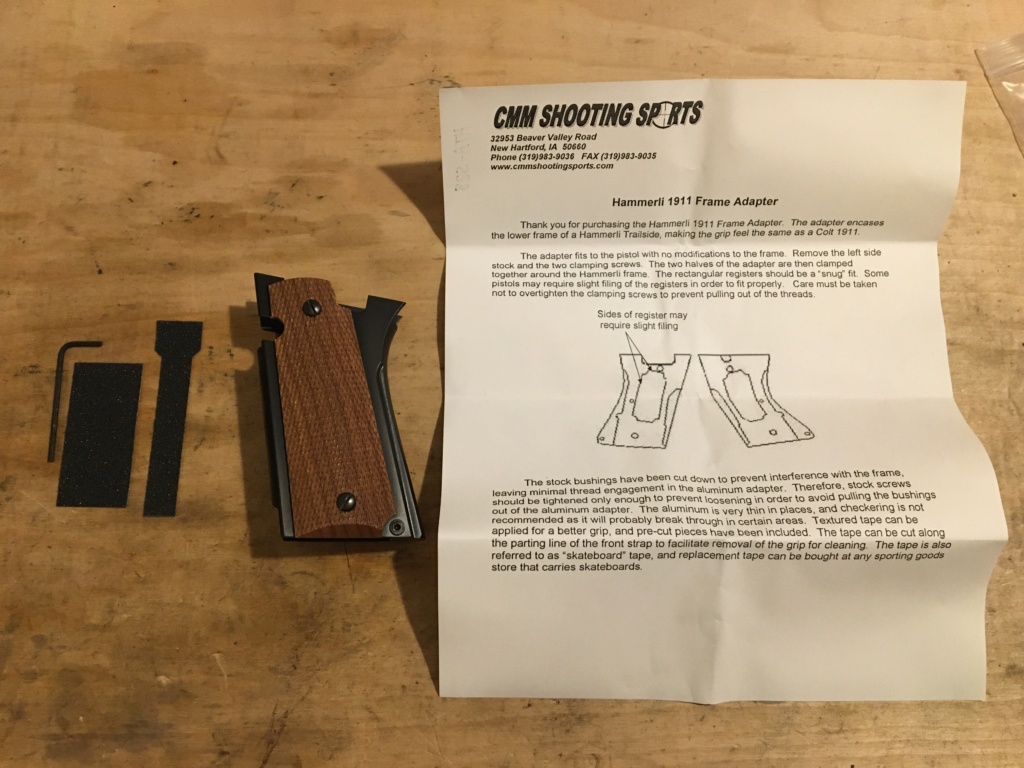 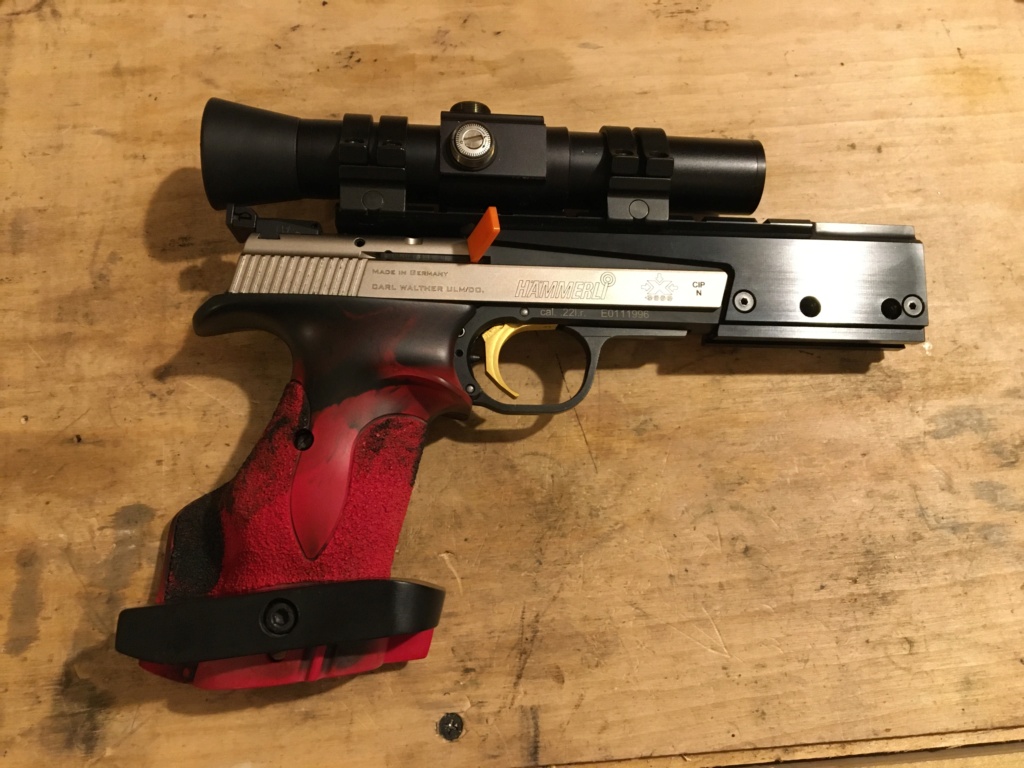 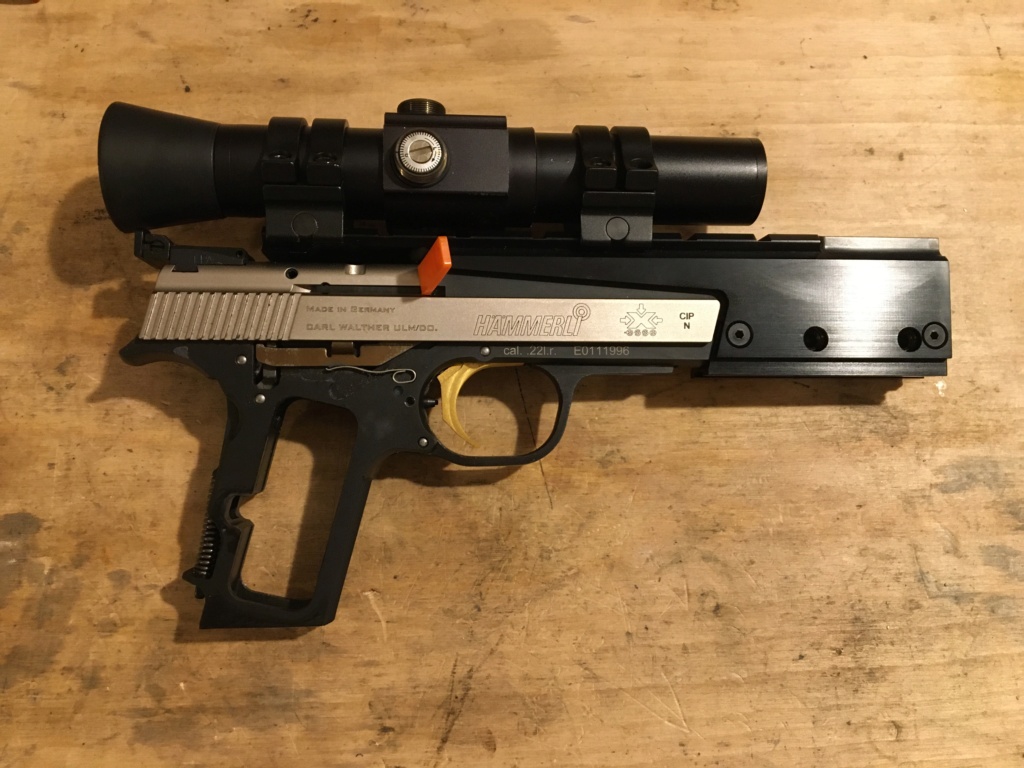 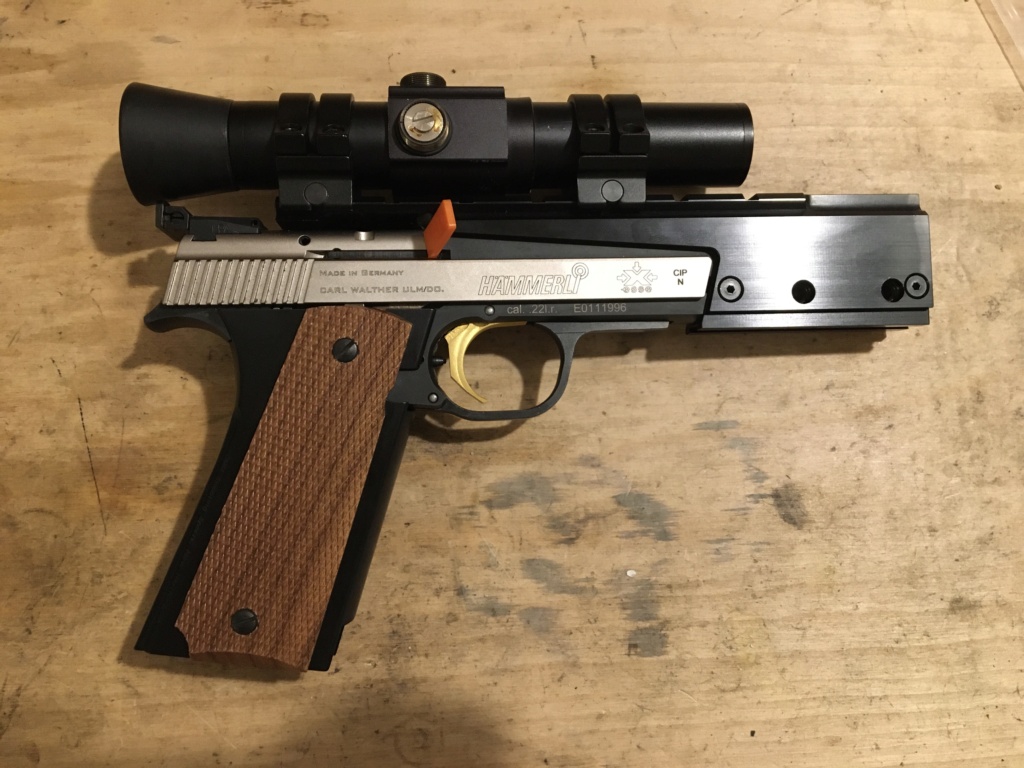 I just bought an adapter for my aw93 and didn't have a very good experience. There is a beaver tail on the adapter that lowers your hand about 3/4 of an inch below the stock grip, end result is the barrel is about one inch higher than your hand. If I would have known that I wouldn't have purchased it.
That is all irrelevant because when I install the adapter the gun doesn't cycle .
I have called the company and left messages and zip, nothing no return call. This was not a cheap adapter and now it needs to go to a gun smith . I hate to sound  like a whiner but that is my experience .
Tom

Jason, i have a CMM adapter on my trailside also. Larrys used to make a beaver tail adapter for the pistols but they have been out of production for a while.. be sure and take a look at mine next month at the state match. Be a great 3D printer project or if you are handy with wood. Originally they were press fit in the pistols. I had to glue mine on.. lucky to get mine from the same friend who sold me his adapter..

Hey Jason, where can I purchase the scope mount on your Xesse?

BJR wrote:Hey Jason, where can I purchase the scope mount on your Xesse?

It’s a Larry’s Guns scope mount. I’m not sure if it’s availability anymore since Larry passed away. You’ll have to check with Jim Henderson and Red Feather Outfitters. They bought the business as I understand. 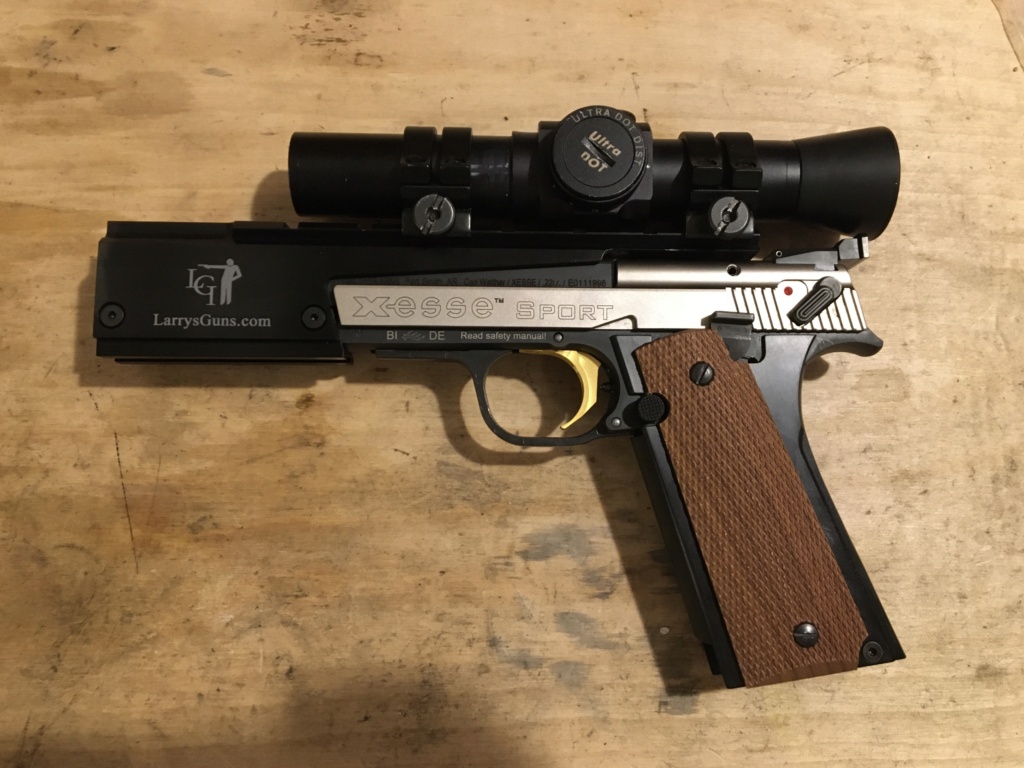 I have a trailside and can confirm that fitting grips to frame is common for that too.  Do exactly as you said: file a little, check for fit, repeat.  I recall the the recesses were not big enough for my gun as well.

So here is what I was wanting to do all along with the CMM Shooting Sports 1911 Grip Adapter. I’ve attached the right side panel of a Herrett Nationals 1911 grip.

I used to shoot a S&W Model 41 with Herrett Nationals and I loved it. In fact I had Herrett Nationals on a High Standard when I used to own one of those, and I have them on my muzzleloading pistols too. I can’t use them on a 1911 however. It’s too big of a frame and too big of a grip. I’m sure I could thin them down and make them work for me with a 1911 but it was too much as it comes from the factory.

But on this Hammerli now.. this is what I was wanting. This feels just like that “feel” I had with all my previous guns. With the CCM grip adapter the length of pull is too short for me. I was pulling shots to the right and pushing shots left horribly trying to find the right position to have my hand in to give me a trigger finger position I wanted. It took some getting used to. But this Herret grip piece is thicker and takes up the slack. It puts my hand right where I wanted it.

Granted it wasn’t made for a Hammerli. It wanted to bind on the slide. I had to relive the grip to make clearance for the slide. But it works now and I love it. 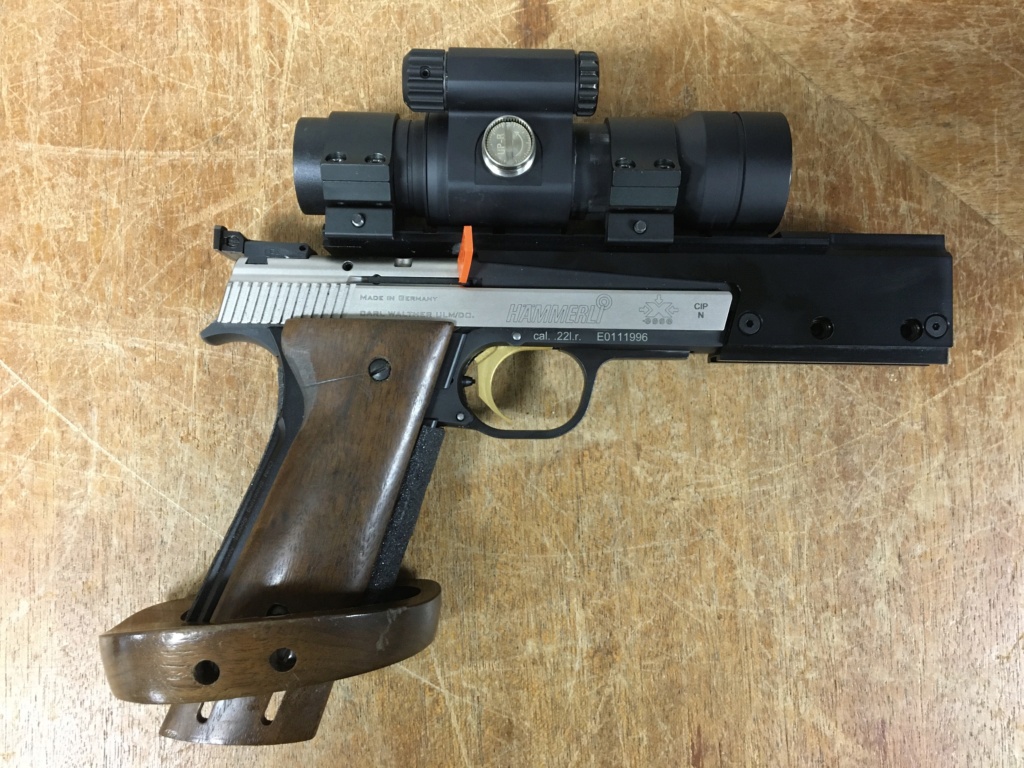 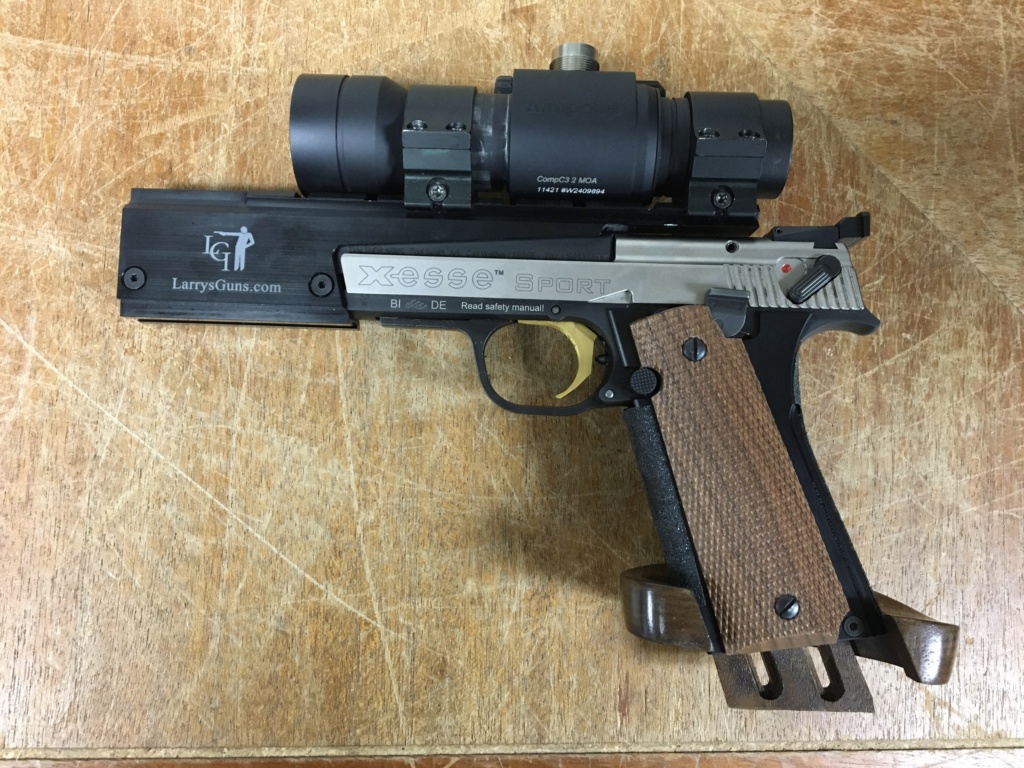 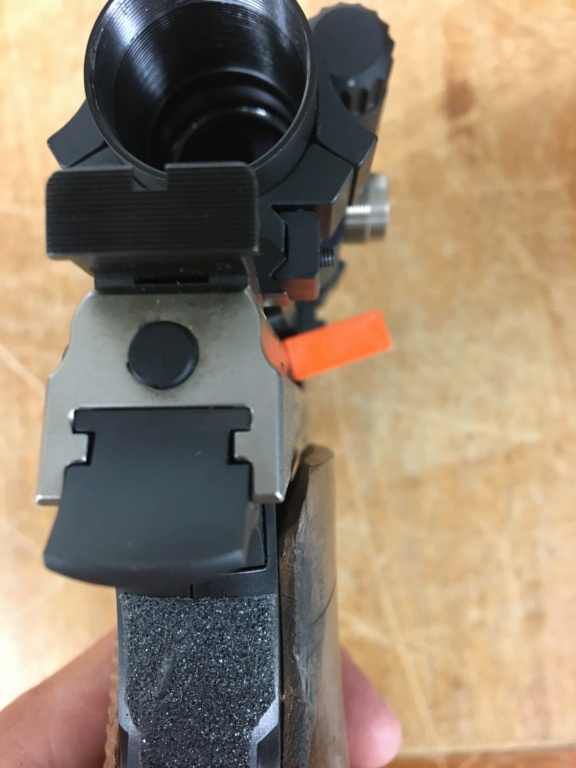 Jason I did the same thing on my 1911 because I couldn't get a stronger grip on the pistol, my strength is stronger now and I went back to slabs. The same set up on the HS but I filed most of the thumb rest off the Herrets. I still go back to this setup when the arthritis gets real bad.
Stan

Tom,
I kinda remember something about the AW-93, but didn't find anything with search. May have imagined it, but my thought is there was an issue around where the little foil insert is that required some filing.
I don't recall whats under there, maybe part of the trigger linkage. I'll have to take a peek later when I can get to some screwdrivers.
The other possibility might involve the slide stop. Unfortunately, my adapter is out of reach for the time being, and I cant see anything past the factory grips.

Thanks Wes
Just got it back,  the lever that holds open the slide was binding on the adapter.  So after each shot the lever would hold the slide open . Turns out not a big deal,  he actually had to remove quite a bit of metal.  The key is to know where to remove it ! Anyhow it's up and running.
Tom