This week I took my old friend out of the drawer. It’s been a while since I’ve shot my Benelli but it felt pretty good.

Had a frustrating day today - last time, I thought my Aimpoint H-1 broke, as I couldn't adjust the dot far enough to the right.  I replaced it with my H-2, and had exactly the same experience.  Looking down at the H-2, it looked to me like the sight was pointed off to the left, which should be impossible.  I'll ask Larry about this.

Because I didn't trust things, I also brought my Aimpoint 9000sc.  Mounted easily, got it sighted in equally easily, and while it's heavy, it worked.  I need to practice more at timed and rapid fire - all I've been doing lately is slow fire.... 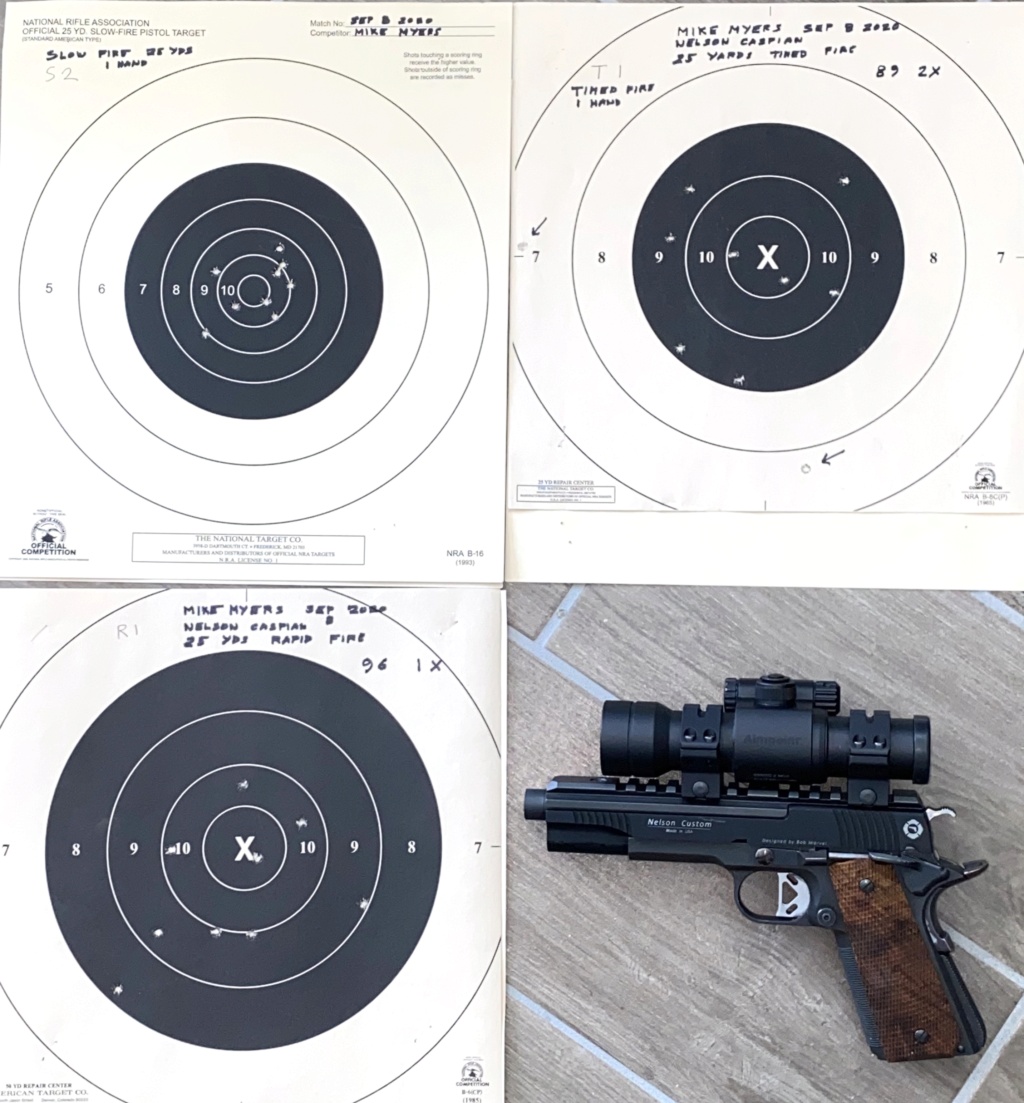 Note: Because the Aimpoint 9000 is so heavy, and has such a wide and clear view, the gun/sight was more stable, and once I got used to it, it was finally easy to get in 5 rapid fire shots in the allotted time.  No more hunting for the dot.  Either my hardware is better now, or I'm getting better at rapid fire. 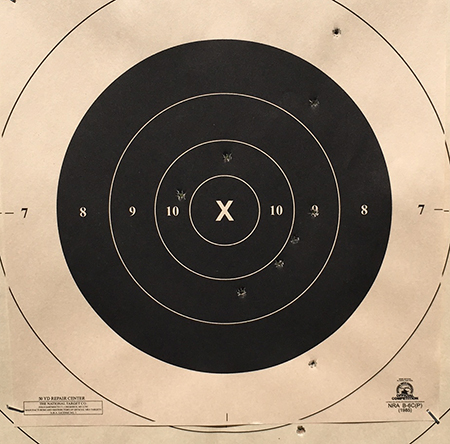 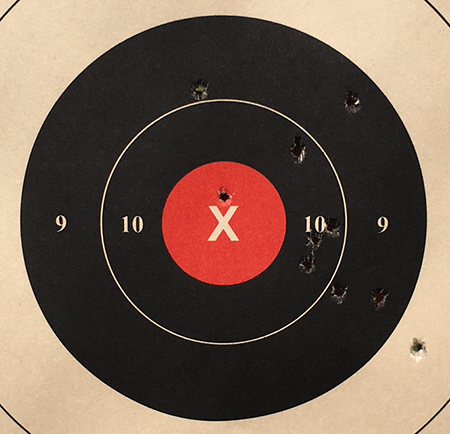 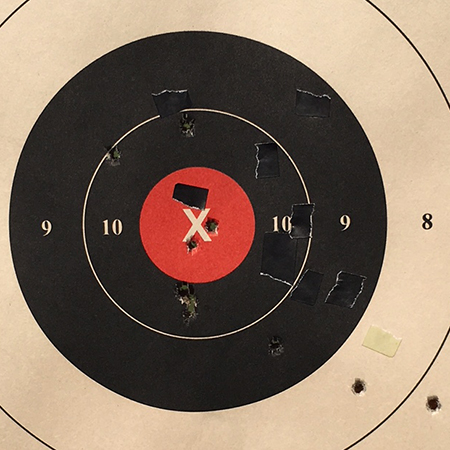 After yesterday's frustrating experience, I made some changes.  After a long discussion with John at Aimpoint, I found out the things I wasn't doing right, corrected them, and put the Aimpoint H-2 back on the gun. Not sure how big a problem it was, but I don't think my hands were all that steady in slow fire partly because of the weight of the Aimpoint 9000.

After looking at the Nelson from both sides and just staring at it, I realized that the Aimpoint mount was blocking the ejection port, so I moved the Aimpoint forwards as shown in the photo below.

(Side note: after the change, my CMP 22 ammo and my CCI ammo all worked flawlessly, no jams, no FTF, no problems.  The Nelson "just worked".  I will raise the elevation screw before I shoot again.)


There was a rifle match going on at the other end of the range, so I had three 20 minute sessions to get the gun sighted in, then shoot.  At the end of the session, the rains set in, which was the end of my day.


I don't know if these targets are considered good, average, or yuck!  I do know I went home with a smile on my face, as I avoided the raindrops. 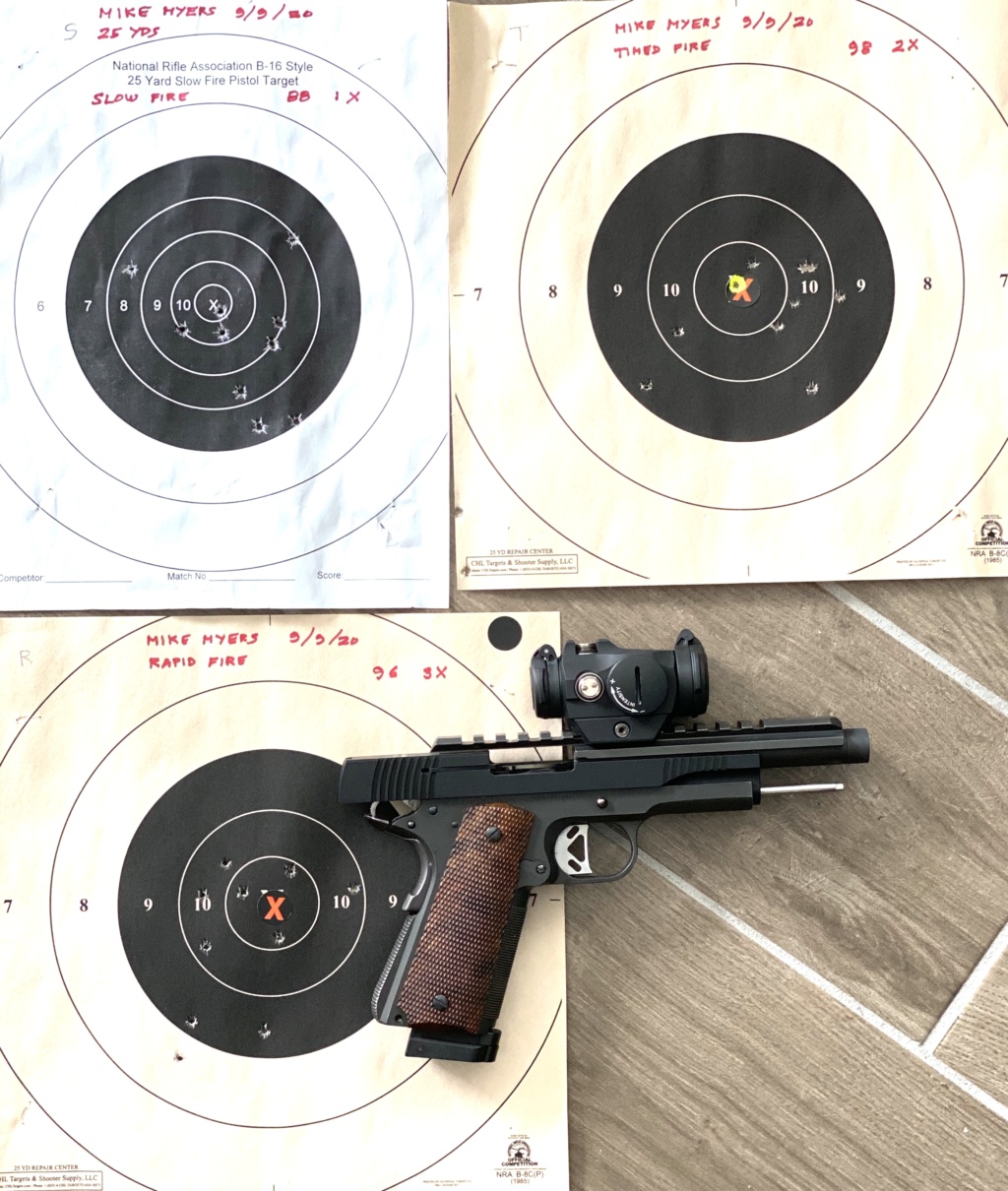 Added later - Larry at Nelson's tells me the Aimpoint sight should work just as well at the rear of the rail, where I used to prefer it to be.  Eventually I'll move it back there for testing, but for now, I'm not changing anything.  So ignore what I wrote about this up above - Larry tells me it is not an issue.

Final shot a BE Couse, its been a long time.. 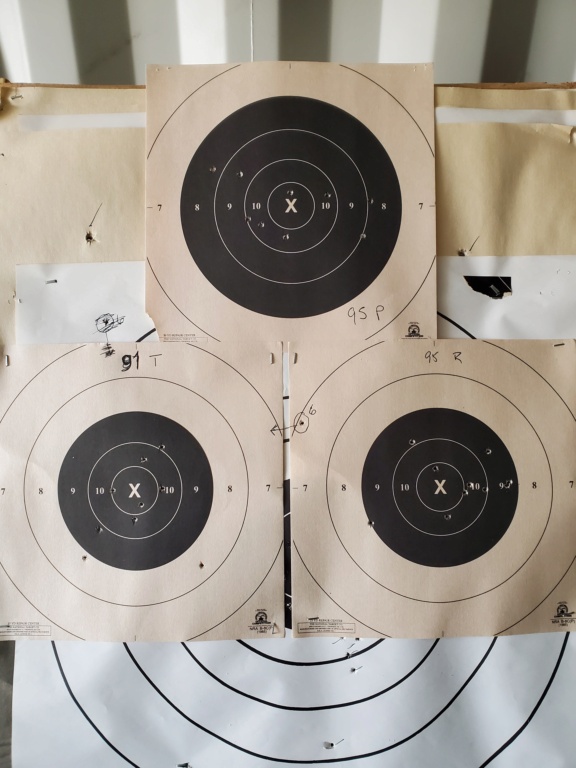 Nice shooting Jim. Welcome to our weekly match. Do you have a place to shoot bullseye matches after the snow flies? I’m sure that will be happening soon in your neck of the woods.
JKR

Not really. Closest indoor range is 67 miles south and is 50ft only. They had a league until the Covid-19 issues shut it down...


Comment/thoughts:  CrankyThunder tells me to concentrate on trigger control to the exclusion of everything else.  So my one-track mind kept playing a jingle all day today "WATCH THE DOT, WAIT FOR THE BANG", and I tried to blank out everything else.  For reasons I don't understand, slow fire got more difficult, but Timed Fire and Rapid Fire seemed to get easier.  Shooting at a Cadence helped, but for slow fire, everything slowed down so much I felt I was taking way too long before I shot.  For Timed Fire and even for Rapid Fire, the guy almost automatically went to where it needed to be for the next shot, just like you guys said it would. 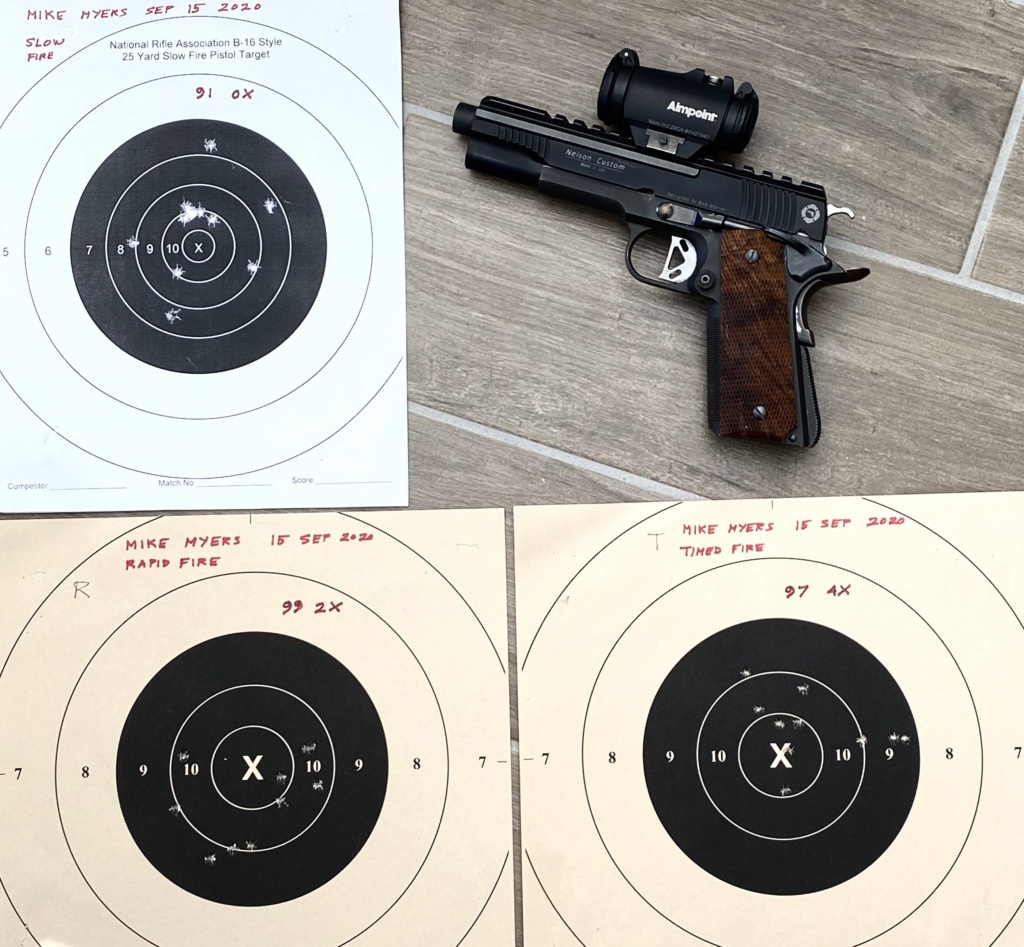 First league night since the panicdemic shut nearly everything down here in the Kingdom of Cuomo... I’ve shot some practice/training, and was going to shoot a NMC for score and submit it until I found out I only had slow fire targets on hand. 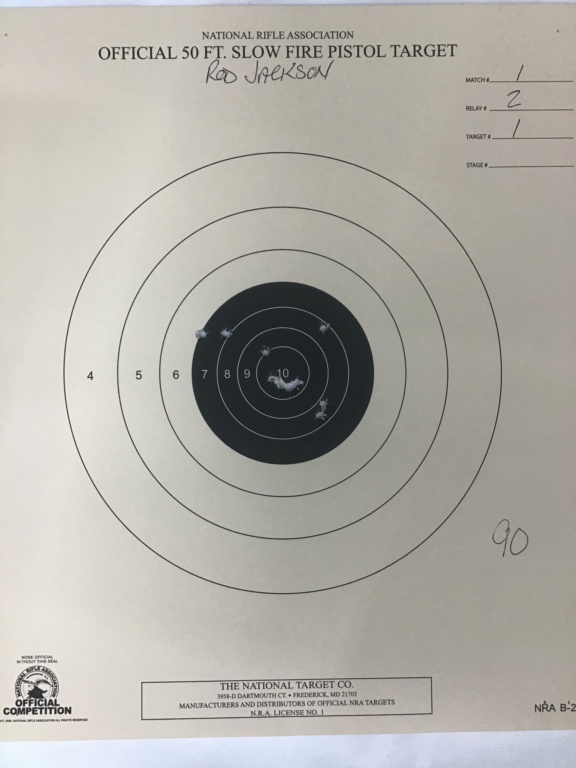 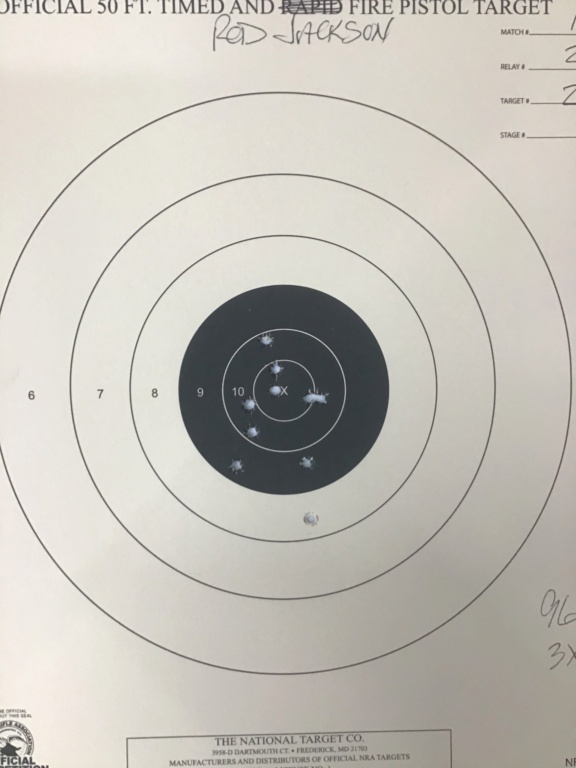 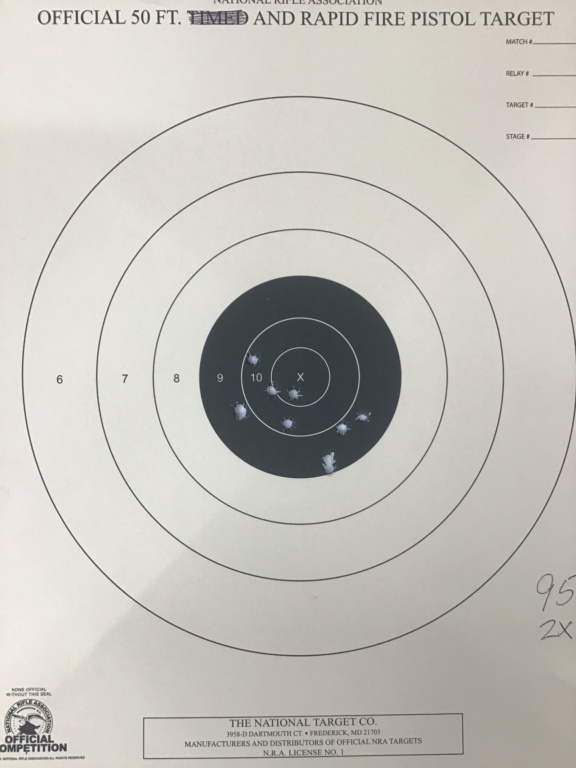 Who's got a plug handy?

I just looked at the target again, as near as I can tell it touched the line, I wouldn't waste a dollar on it though... I guess I need to get a plug and maybe some overlays... 89 or 90 I'm happy. As that score is about where I was when the fecal matter hit the air circulation device...

Good shooting! Keep it up!

Made it to the indoor range this evening, shot 50'  NMC.

All of the fundamental threads lately on trigger control have been helpful, I appreciate the top shooters taking time to explain these concepts.  I have also been reviewing my notes from the last "Ask the Masters" session, looking forward to the next one.