Now I know why I like Swiss cheese, not American, on my burgers!

If you skip the initial BS, there's a pretty detailed review and the major differences between the original Swiss version and American version are highlighted. So no more hand fitting (obviously!), stainless steel instead of carbon steel, and top locking lugs are gone.
Not sure about the trigger, the only specimen of a target 210A I tried at my local gun store had a very gritty trigger, nothing like a decent bullseye gun.

The trigger on my P210A Standard is fantastic, if I could put it on my wad guns I would, its a very nice roll, almost a 2 stage. Very impressed by the fitment and lockup for the asking price.

First off, I celebrate my 80th birthday next Friday. I tried to resurrect by bullseye shooting last year but stopped after demolishing too many 50 yard target frames. One handed .45 pistol shooting at 50 yards appears to be in my past. I can still do pretty well using a two handed hold so that's where I am now, shooting a lot of falling plate and 3gun matches. When I first got the gun the trigger left me a little perplexed. I'm more used to bullseye pistol shooting so I take up the slack in the trigger until I hit a stop and then apply more pressure until the trigger breaks. When I tried this I hit a couple of "pauses" as I was taking up the slack. The break was very good though. Just not the glass rod breaking" type. The break was light and good though I wouldn't call it "crisp". I took the gun to a "show and tell" lunch I have on Fridays with other gun nuts. One guy tried the trigger and commented" what it this, a two or three stage trigger?". Somewhat mortified I mumbled something back. Later, in my reloading shed, I started playing with the trigger and finally notice if I just pulled the trigger without looking for a "stop" the trigger felt fine. I think my Shadow 2 operates the same way. So I sez to myself, "self, you ain't going to be shooting this gun one handed at 50 yard bullseyes." This is not a prone target rifle, it's a fast action pistol, so shoot it that way.". So I did and it's wonderful. Just pull the trigger till the plate falls. I'm still in the process of retraining my trigger finger to function this way. Also, this way, I don't experience the "chicken finger" while waiting for the trigger to break.

I had 4 experienced shooters try the trigger on my P210A target model today. All of them guessed the weight was under 4# and were surprised when I told them it was adjusted up to a little over 4# (to make weight for CMP service pistol).  The gun and trigger got a lot of compliments.  I will be shooting it at a CMP regional match next weekend while my regular .45 hardball gun is being rebuilt.

I owned Pardini, CZ Shadow Accushadow etc. All high end Pistols. The P210 Target 9MM is perhaps the finest pistol I have ever owned. Everyone i know who picks it up loves it. I never had a misfire or failure to feed no matter what I shot. The only thing I dislike I wish the front sight was a little bigger and it had a frame mounted thumb rest.

smsnyder wrote:I owned Pardini, CZ Shadow Accushadow etc. All high end Pistols. The P210 Target 9MM is perhaps the finest pistol I have ever owned. Everyone i know who picks it up loves it. I never had a misfire or failure to feed no matter what I shot. The only thing I dislike I wish the front sight was a little bigger and it had a frame mounted thumb rest.

Which do you own? Swiss, German or American. I really wish Sig would have kept the design 100% original including the lockup and original safety and mag release. Feels like I sort of have a P210. Maybe some day I'll spend some stupid cash on a German or even Swiss version.

bpettet wrote:I had 4 experienced shooters try the trigger on my P210A target model today. All of them guessed the weight was under 4# and were surprised when I told them it was adjusted up to a little over 4# (to make weight for CMP service pistol).  The gun and trigger got a lot of compliments.  I will be shooting it at a CMP regional match next weekend while my regular .45 hardball gun is being rebuilt.

SO what did you do to get it to 4#??   Would like to get mine there if not too difficult or involves any radical mod.
h

Hi, new to the forum but thought I would add my experience here.  I have a Swiss CNC frame from the P300K era, P210-6, target trigger with fixed sights, which I believe was 1983-84.  The forged frame guns are considered the best, so the Swiss CNC is regarded somewhat like the German CNC guns.  Then of course we have the American CNC guns with some changes such as the barrel lockup, extractor, etc.  Anyway I picked up a P210A and shot it side by side with the Swiss, each 25 rounds at 25 yards slow fire bullseye.  Two very different triggers, but with the better grips and sights on the P210A, they scored one point differently.  Swiss had 3 five ring, 2 six ring, everything else in the color very even distribution.  American had 1 five ring, 4 six ring, similar distribution in the color.  If I can figure out how to post pics I'll put the targets up.  Which do i prefer?  I just started playing with the sear adjustment on the P210A after looking at TO's excellent work.

As is the case with an off-the-shelf ~$1400 1911, trigger work to make it a bullseye pistol is not at all rare; thus, it should not be unexpected for the P210A. If you disassemble the hammer/sear bloc assembly, polish the sear contact surfaces, polish the sides of the trigger bar (and corresponding frame slots), polish the contact point between the sear (hook?) and trigger bar, use proper lubricants where appropriate, and DO NOT wind up the mainspring as a means to increase the trigger pull weight, the P210A trigger can be every bit as smooth (and in my case, actually better) than the German P210 Target that I dry-fired some time ago. I have never handled a Swiss model, however, the Swiss hammer/sear bloc design is substantially the same (mechanically) as the German and USA versions, so other than using harder steel sear surfaces, I'm not seeing an abundance of potential sites for significant improvement, but I could be wrong. I'm also not a machinist, but modern CNC equipment and tooling can hold very tight tolerances, which seems to be the end result in the hand-fitter older Swiss models.

Mine is currently two-stage, and lifts a 4# weight (CMP EIC). I do agree that an improved lockup, and front bushing-style slide (in particular) should further improve its accuracy. I have already installed a new guide rod and heavier recoil spring, which tightens the lockup, and also makes it shoot better (far less "snappy"), with subsonic 147 gr rounds. Like any other pistol, there are going to be hand loads that perform better than others. It's a fairly new pistol, most have likely been purchased by those who do not reload, so it's nowhere as mature as the 1911 as far as accurate cartridge data is concerned.

I'm working on specifying a new mainspring, sear spring, and trigger return spring (set) that would bring it down to a very smooth ~2.5# for CF, and install a red dot. I'm also looking into modifying the trigger shoe to produce an adjustable first stage travel. The nice thing about the P210A design is that the main, sear, and trigger return springs are all simple helical compression springs...thus, fairly easy to experiment with, with off-the-shelf alternatives. The recoil spring is a flatwire design (by necessity!), however, with my improved guide rod design, there are several options that one can experiment with (albeit not in 1# increments as in a 1911).

I've been firing a CZ SP-01 Tactical, with the CGW Pro Package kit installed. The lockup is good, and if desired you can fit a new oversized CGW front bushing. However, the sear cage design is very complicated, and is not adjustable, unlike the P210. Both the trigger return and sear springs are complicated designs that afford little to no experimentation, without spending a lot of money at the spring store. CGW has done this, and as far as I know, they offer the only other (non-factory) option. The Pro Package uses the factory sear, and factory sear spring. The trigger return and main springs are new (lighter). The disconnector is also new (reducing reset). That package improves the trigger pull, but it is still fairly long in SA. I mention the CZ (75) because it is a well-regarded pistol, but nowhere as simple as the P210. 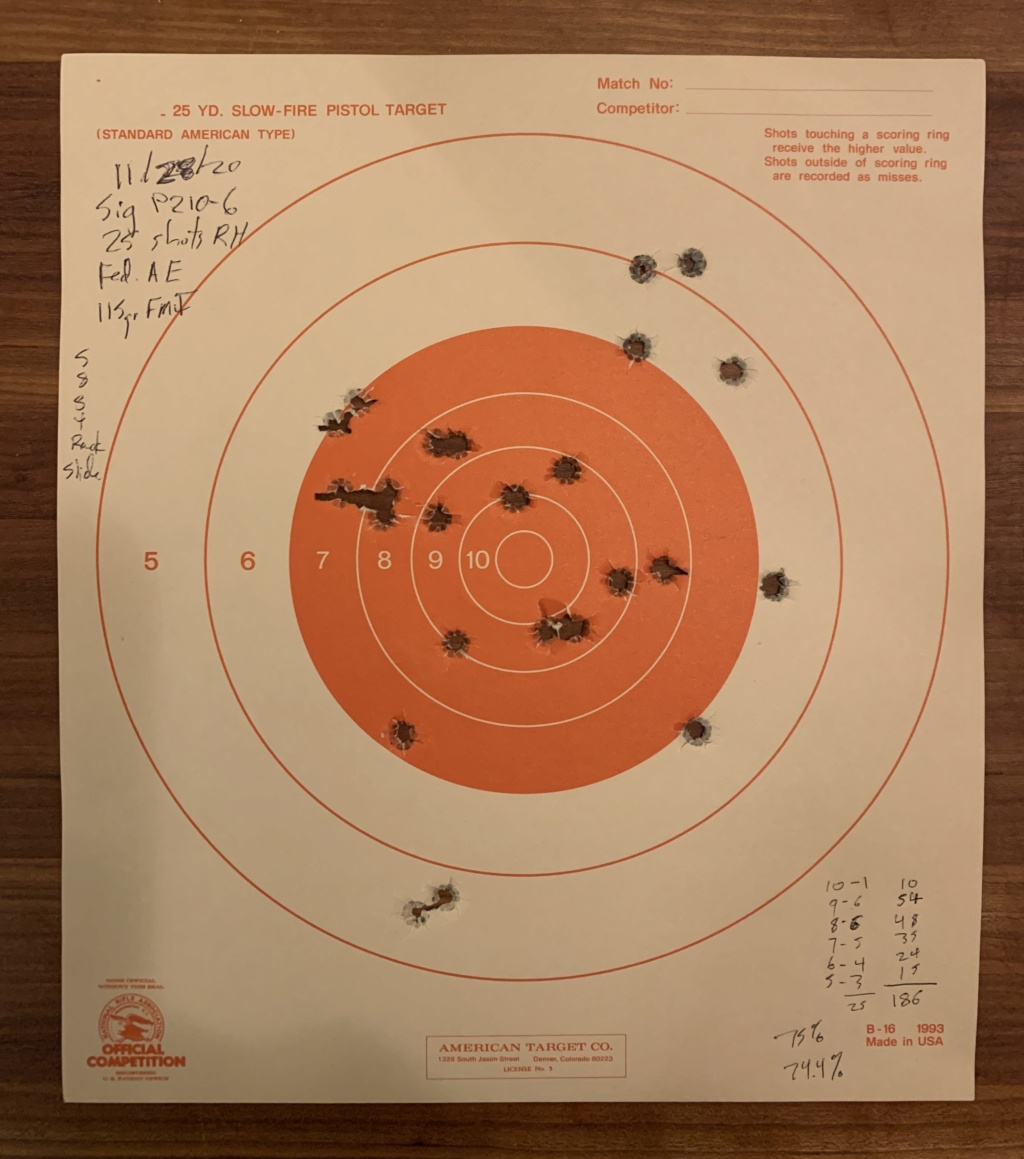 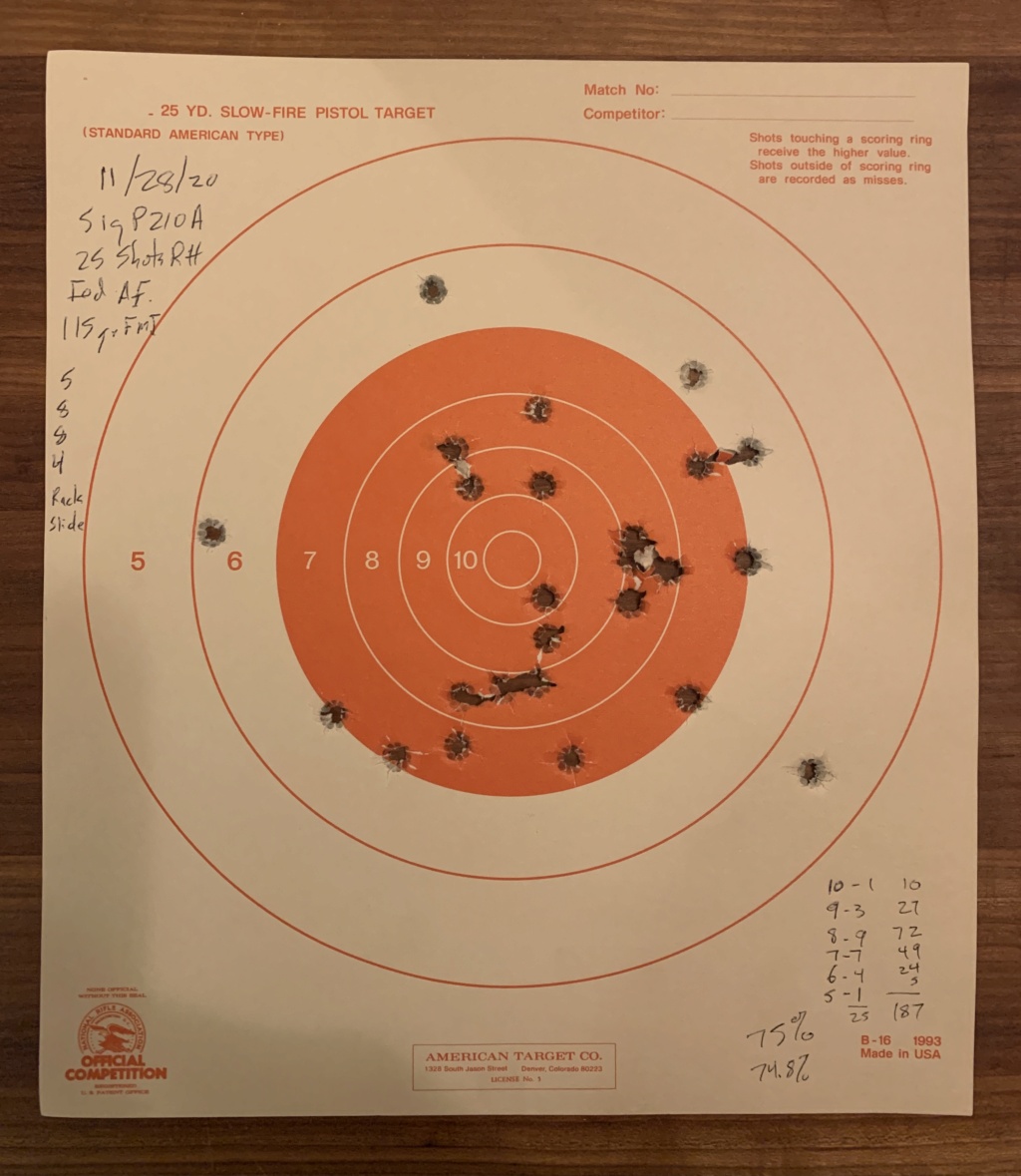 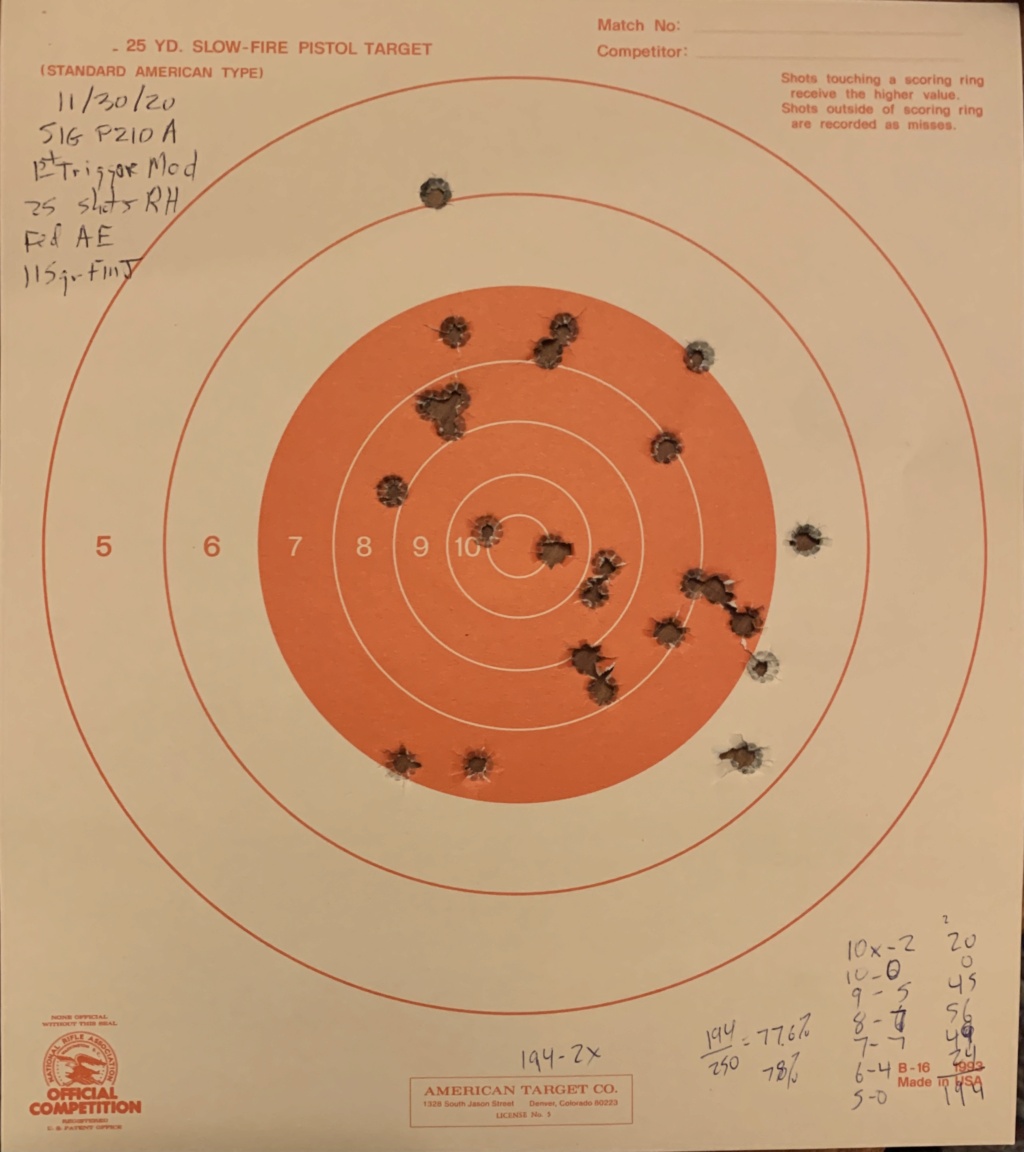 Still trying to figure this out. But the first pic is my Swiss 210-6 and the second is my 210A Target, both fired in identical fashion. The last photo is also the 210A, fired yesterday after doing a first attempt at slight tweaks to the mainspring and sear adjustment using TO’s instructions.