I've spoke to a few people about the new RRA pistols but almost nobody has actually seen one in person. I'm curious how they're finished, how tight are they, how well is the barrel fit. Any of you guys get one or inspect one?

I got one about six weeks ago.

I got the BE Wadcutter in 45 ACP with an optic rail on the slide.

Fit and finish are top notch, I replaced the trigger with a KC roll trigger simply because that is what I like, the factory trigger was very good as far as a crisp break goes-after three years of shooting a roll trigger I had to keep one on it too.  I have not sand bagged it yet but I have very little doubt it won't group well based on the targets I have shot on the LL and SL.  I got 20 LPI checkering and it's very nice.

The only complaint is that the slide stop was so tight it was impossible to install it by hand, I needed to use the edge of a splinter from a wood tongue depressor to get the plunger to let the stop seat, that was something I fixed because it would be a major PITA to do this on the line between matches to oil the pistol between CF and 45 stages. The safety is fit very tight too, that speaks to the attention to hand fit they do. The parts are numbered with an electro pencil which also states they are serious about hand fitting. Reliability is very good, I'm at two alibis in the first 500 shots and none between 500 and 900. I called and asked what recoil spring it ships with, I was told it's a 11 lb spring, my testing seems to confirm that too, I did spring swaps to see where I would land and it will run a new spring between 11 and 12 lbs.

Best of all I bought it from the stock they listed as ready to ship on their web site, so I did not have to wait for a shop order-My dealer got it about 8 business days after she placed the order.

Good to hear Craig. Would you mind sharing some pictures.

Hey Zane! I recently picked up a 2018 model, serial number 352, while waiting for Jon to finish my build. It was a good price from Cardinal, so I couldn't pass it up. Fit and finish is very good, mine is 25 lpi, which I found I like better than 20. A few things...

It's definitely tight, but it doesn't quite have that snap you get from a really well fit barrel as it locks up. More like a thunk.

I swapped down to a 10# recoil, and 18# mainspring, and I need to run at least 4.2 WST behind a Zero 185 LSWCHP to get it to cycle reliably. Hoping it'll loosen up a bit. I've only got maybe 500 rounds through it. It's been 100% reliable with proper ammo, though not with the mag it shipped with! Using Metalform round followers. The combo rib is HEAVY. If you plan on running lead with an optic, you're probably gonna need to swap it out. I'm currently running a kodiak micro rail.

Trigger is actually very nice. Crisp, with a clean, fast, consistent break. I like it quite a bit. 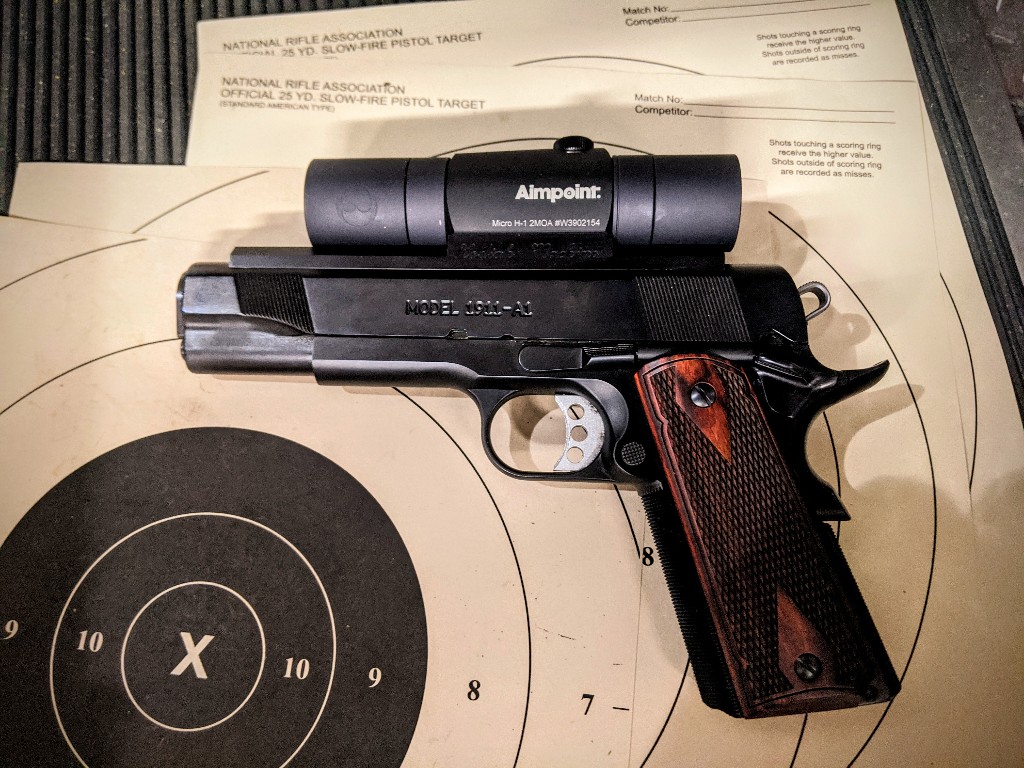 Also, mine came with a test target showing. 1 7/8" group at 50 yards. I have no reason to doubt that based on my personal experience, though I haven't ransomed it.

I love 20lpi, after using it I will never consider 30.

My old RRA was blued but the pic above almost looks parkerized or coated.

Nah, a dirty gun, and bad light in my basement. Definitely blued. Really pretty, too. Not quite Colt royal blue, but still good!

I am a Rock River fan. Can't comment on the new ones but my early four digit sn unlimited match with a 6-in barrel is still tight and puts most rounds in the X-ring when fired off a non-Ransom rest at 50 yds using the AMU load. The only things I've done are replace the barrel bushing, barrel link and slide stop, installed a new sear, and put a short trigger on it. I think it is the best match-ready 1911 you can buy for the money. Images attached, old and recent (with Aimpoint). dipnet

Interesting 1911 I thought you where talking about Rock Island armory at first, slight cost difference.

I picked up my new ball gun at Camp Perry last year. It shoots tight with a very nice trigger. There is no slippage with sweaty hands due to the 15 LPI. I definitely recommend their guns.