There are many discussions in this forum about grips, but none of them compare grip material.  Grips can be made from wood, metal, plastic, etc., and also rubber.

From only a performance viewpoint, are there reasons for or against rubber grips?

I now have three sets of rubber grips, one for S&W revolvers, one for a S&W Model 52, and one more recently for a Colt Python.
Gripping a gun hard, which seems to be necessary in Bullseye Shooting, feels different with rubber grips, probably because the grips feel "softer" and change slightly to fit your hand best.

Do any of you guys use rubber grips for Precision Shooting, and if so, why, or why not?

Sometimes it's best to try these  things to determine which works best for you!

DA/SA wrote:Sometimes it's best to try these  things to determine which works best for you!

The only differences I'm aware of, are that rubber "feels" more comfortable than wood, maybe because both my and and the grip are reacting to the other to get better contact.  This is on my Model 52, which I've been testing for a few days now.

On any gun with a lot of recoil, I prefer something like the Sharkskin grips on a 1911, or the Nill grips on my revolvers, where the grip is very aggressive and "digs into" my hand  I know the gun "tries" to move in my hand unless I grip very tightly.  So, following the advice I've gotten here (and seeing the difference in my targets) I grip the gun almost to the point where it starts to shake.

I suspect the rubber doesn't "move" in my hand, but being rubber, it might allow the gun to move slightly, with the outer part of the rubber remaining in contact with my skin.  In that sense, my grip with rubber might be better than the other materials, as after the shot, and after the recoil, everything is back to how it started - the gun is less likely to move in my hand.  On S&W wood grips, if I don't grip VERY hard, the entire wood grip tries to shift position.  The "fix" was to grip much more tightly.

Standard wood revolver grips from S&W try to do this much more than the Nill grips I've bought.  The texture on the Nill grips digs into my hands, like the texture on 1911 sharkskin grips, and the gun doesn't seem to shift in my hands even if I don't grip as tightly as I can.


DA/SA, there are far too many times when I figure out what I think works best for me, but over time, I end up doing what you guys recommend, even when I think I was doing fine "my way".  Even then, when I write "you guys", I read what everyone has to say, but with some people who I respect the most, I just follow their advice "blindly".  ......or at least try to.

What I was getting at is that if a person has arthritis or a just a bit older and not so strong grip any more, rubber grips on a revolver may be more comfortable for them over wood or harder plastic grips. Then if you add a little sweat to the hand the rubber might "cling" to their hand better than a smooth wood grip. Lots of variables when it comes to grips!

I like P226 Sig's for general shooting and discovered the old out of production "Uncle Mikes" rubber grips. They work really well for me since they cling to my hand when It gets sweaty and are fatter than the stock hard plastic grips. I find them fairly easy to find, as most people don't like them because they are too fat!

Hand size and configuration, as well as grip strength have a major effect on grip preference from one person to another. 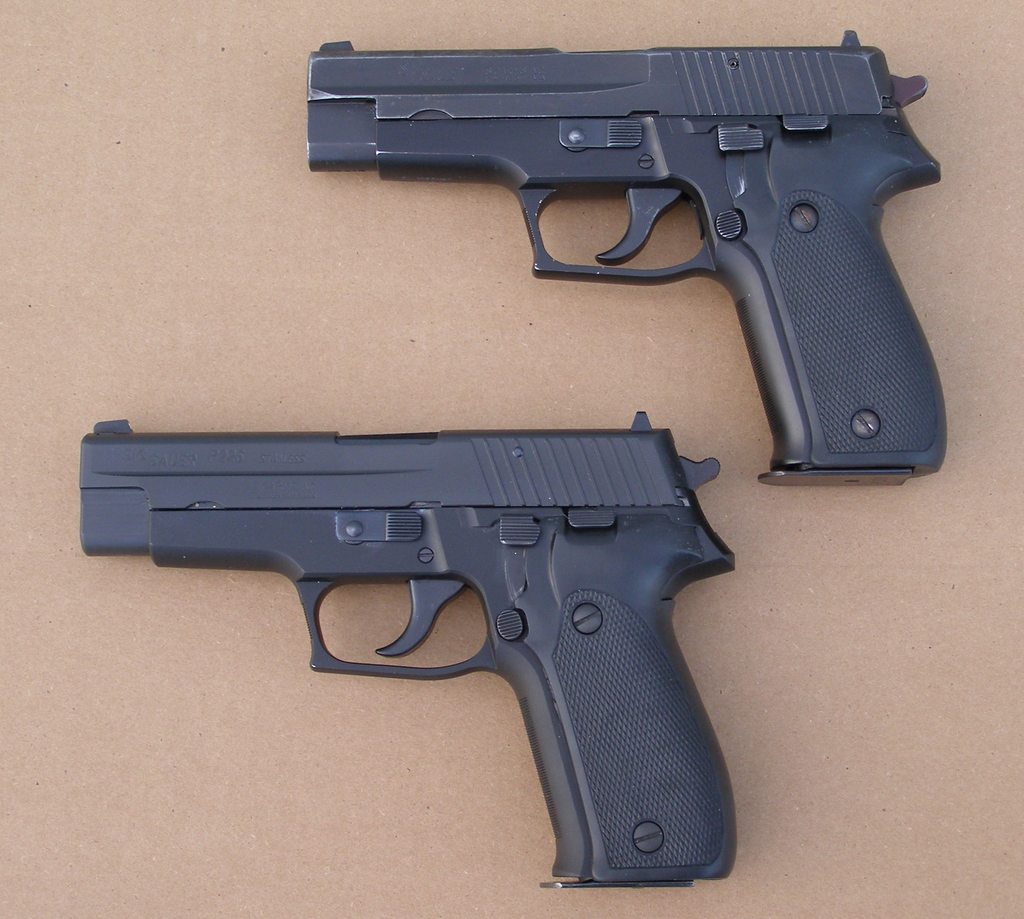 Sometime when you are on EBay take a look at Pachmayr "gripper Professional" grips for your K frame. Exposed back for non dent grip and finger groves out of softer rubber for more grip. Might be the compromise you're looking for.

Len, which do you prefer, wood or rubber?

You might not remember it, but you helped me find these Pachmayr grips a couple of years ago.  I mounted them again several days ago, and they seem to be working out just fine.  I think the rubber allows me to grip the gun even more tightly before "the shakes" take over.

You told me about them, I ordered them, but they came as a single piece.  I couldn't stretch them to fit around the gun, so I cut off the middle section that would go over the front strap. I've been shooting with them for the past several days, and even in dry firing, they seem to fit my hand better than my either of Model 52 grips.  I was even looking into Nill Grips for my 52, but the piggy-bank was empty.   :-( 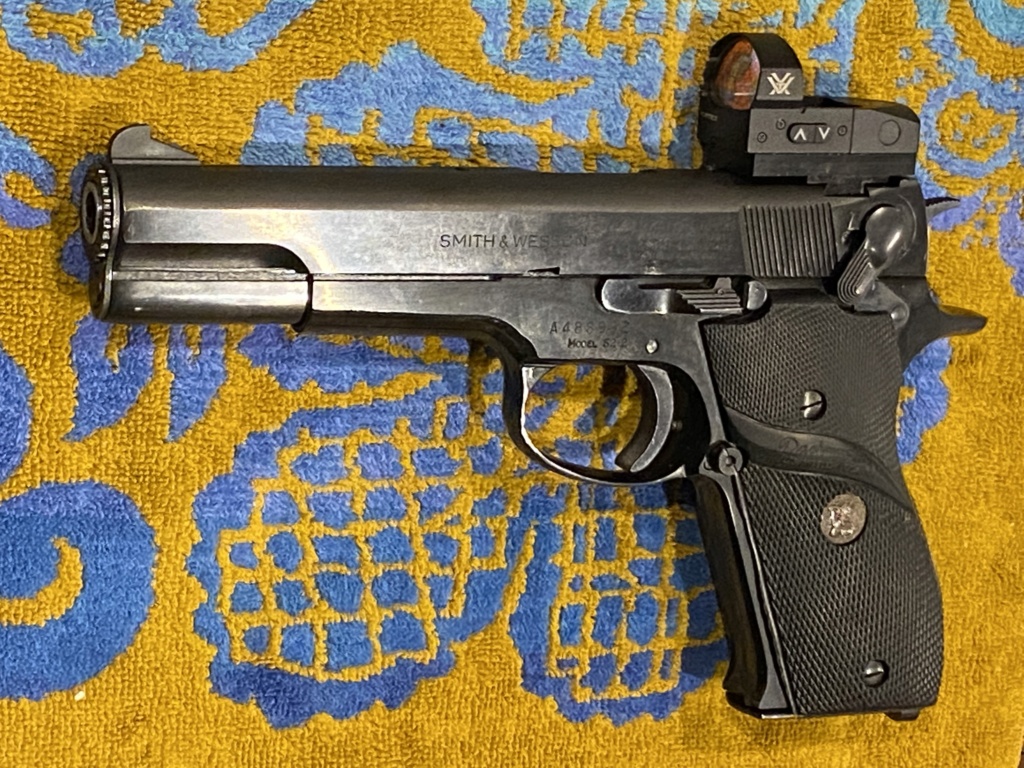 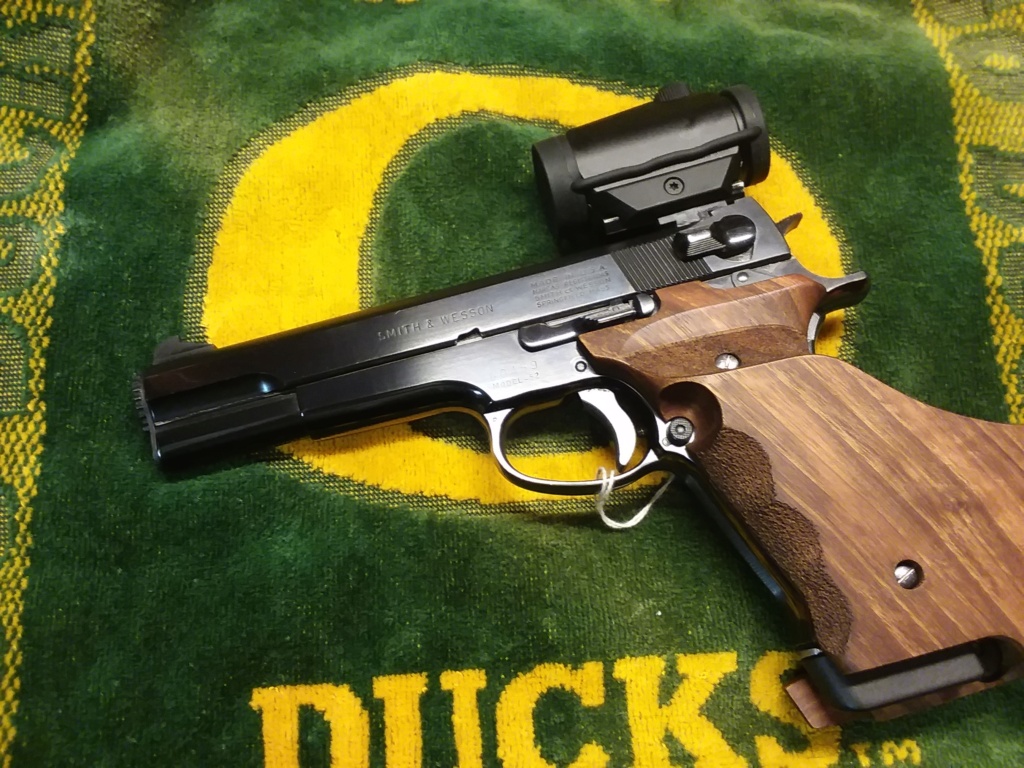 I do remember Mike. In the future if you ever get another set of rubber for the 52 the trick is to screw one side down tight and roll the grip around with both thumbs and snap down over other side.

I have ultra-thin titanium grips on my 1911s. Nice solid grip with no movement. But, as stated above, give them all a try. Grips aren't expensive and you can resell the ones you don't care for.
Joel

LenV wrote:........the trick is to screw one side down tight and roll the grip around with both thumbs and snap down over other side.

Aha!  You have lots more tricks in your toolbox than I have.  I tried for an hour or so, then gave up, and cut off the center part.
I never thought of doing what you just suggested.  Thanks!!!!
(But now that they're on, I have no plans to get another set.)


1joel1,  I thought titanium grips would be awesome, but then Dave was so in favor of the Sharkskin grips.
Thanks to Len as I recall, I even got a pair (actually two pair) of awesome SIG grips, for my 1911 (which now is back to Sharkskin) and a second pair that is now on my Nelson conversion.

I was thinking about all this earlier today at the range.  With wood grips, you can squeeze as much as you want, but some parts of the grips get more "traction" than others.  With rubber grips, since the rubber compresses a little, the "gription" between my hand and the grips sort of balances out - as the "high" parts of the rubber compress, more of the grip is touching my hand, more strongly.  If I grip hard enough, it all evens out.  I'm not sure if this is a bonus feature or a negative - it's just "different" for now.

I only have one set of ergonomic grips - they're for my very old High Standard.  I took them off and went back to standard grips.  I thought I had an old set of quite uncomfortable wood ergonomic grips for my Model 41, which I haven't shot in over two years.  Maybe I'll go looking for them later today.

Thanks to someone in the forum selling his second set, I now have a set of rubber grips for my Python.  I want to try them, but I don't think anything will be better than the Nill Grips I bought.

We need gun shops all over the country, well stocked in all these things, so buying grips would be like buying clothes - try them on first, and get a set that fits best!   :-)

One unexpected difference between rubber and wood.  I've been shooting the Model 52 for going on a week now, with the Pachmayr rubber grips.  Very happy with them.

I was just setting out my Nelson Gun, currently with lovely looking SIG grips on it.  I thought I could grip it just fine a couple of weeks ago, when I installed them.  Now I'm not so sure - all they want to do is slip in my hand!  They feel like they have a shiny coat of wax on them.  Maybe I go looking for Pachmayr 1911 grips....

Do they ever have the solution for you. Wood and rubber on their classic grip. 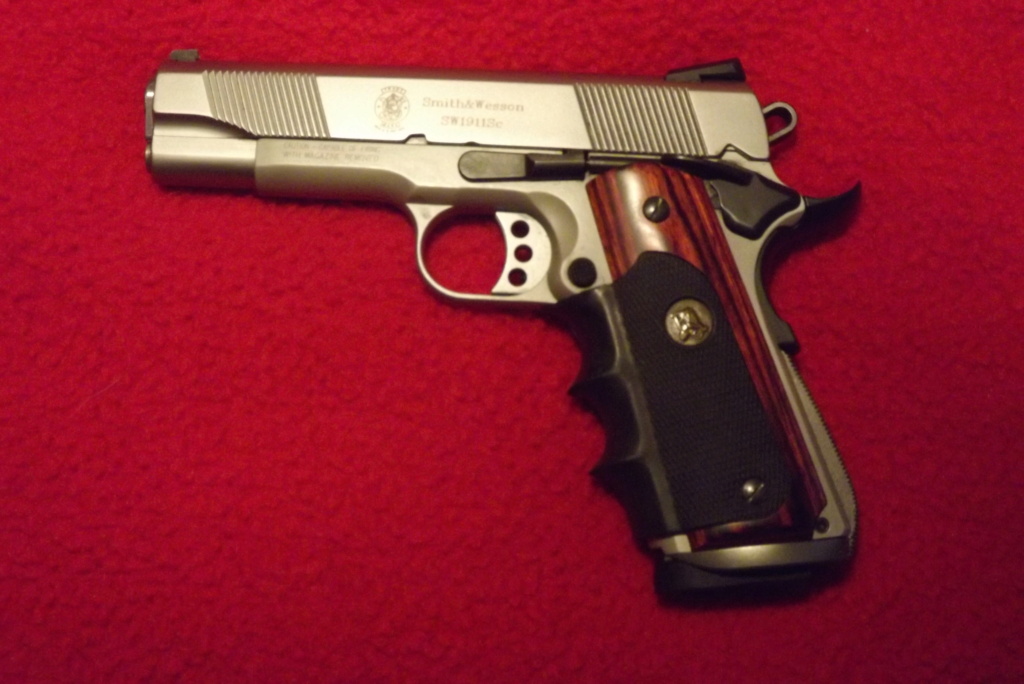 Or some other choices in soft. They make a soft panel with insert, Pachmyar just like on the 52 or Hogues on bottom right. Ha!   Hey, I have a set of those.  But it's in India, in my "practice gun" which looks nothing like a gun, but for those grips.
Sure look pretty - that's what was on my Baer when I bought it.

I took off the fancy wood grips, and added these.  Not pretty, but functional.  Now the 1911 sort of feels like a Model 52 in my hand(s). Hopefully it feels as good in my hand as in my hands.  If I get to the range tomorrow, I'll find out. 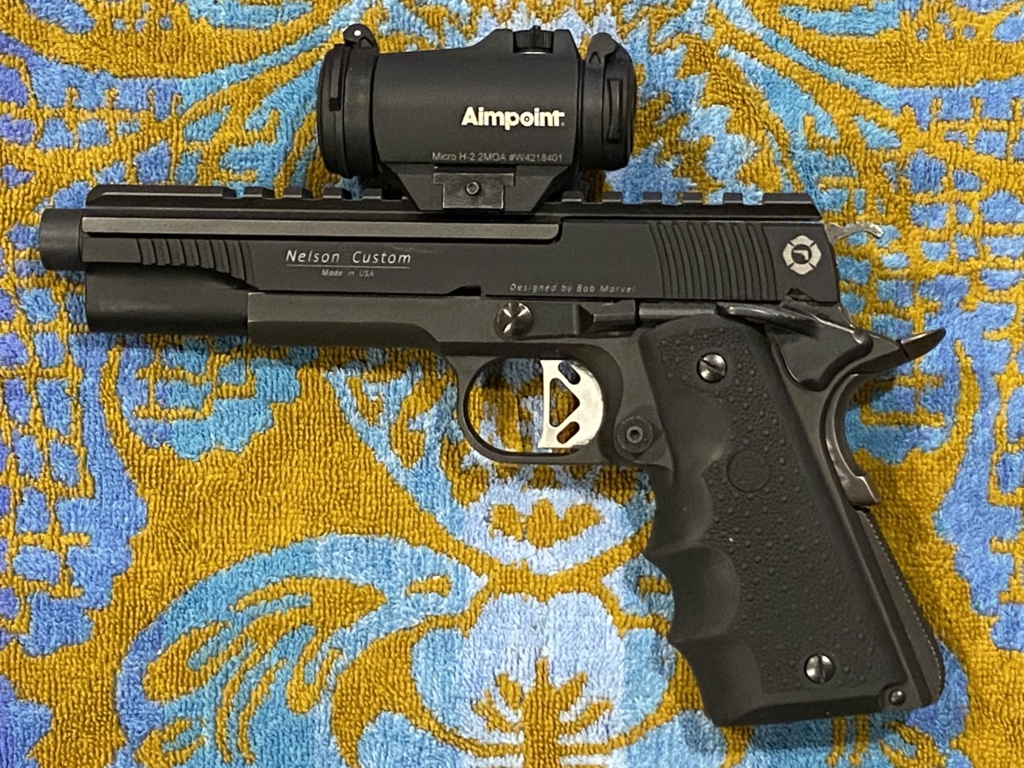 Personally I don't like rubber grips. Too much inconsistency and movement. I've been trying out Rink ortho grips on my 1911 and the results are mixed, but compelling.