Seven shooters last week. We’re still hangin’ in there. A couple guys turned in 45 scores which is good to see. Mike broke out his model 52 and Jim Fabanich took his brand new Pardini out for a run.
Brand new week now. Let’s see if we can better last weeks score.
JKR

Well with that opening I’m loath to post my pics... I’ll just give my scores which are frustratingly declining.

I've recently been having trouble posting pictures, so please bear with me.

I'm quick off the mark this week. My first 900 today with the 45 was poor, but I was testing various ammo and there were other members on MY range! So I'll use those excuses. Second 900 was much better. Then the weather got very calm and I did this 900 with my Roddy Toyota SARO. I ran out of the ammo that the SARO now prefers after 5 cards, but that was not really an issue - I think that the excellent (for me) sequence of SF cards made me a bit anxious and I did not shoot the TF/RF as well as I have recently. Good match practise though. 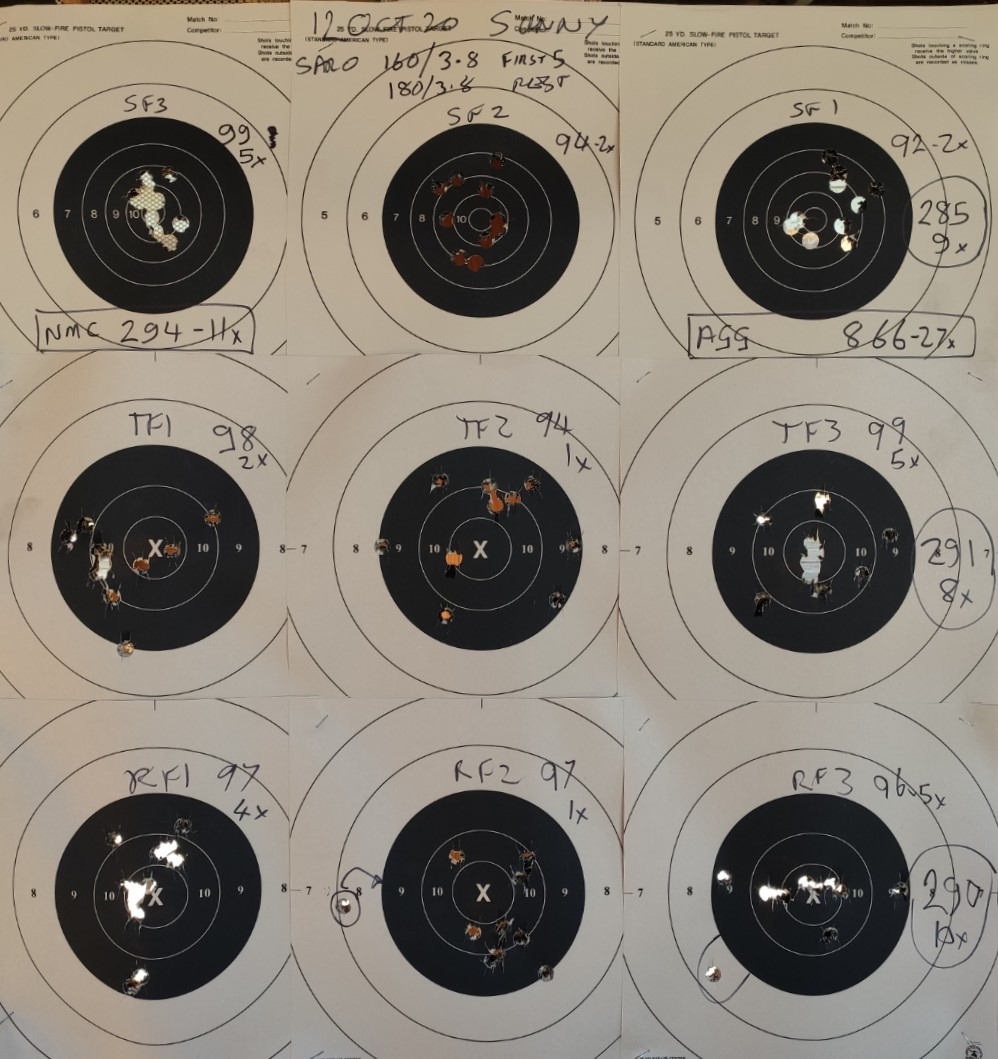 And now, JKR, "pick the bones out of this lot"!
At most matches here in the PNW, the EIC & DR events follow the 2700 - often late in the afternoon when the light is failing - with my sad older eyes and iron sights this poses a big challenge. So, having just shot well with the wad gun, I decided to conduct a Service Pistol comparison test in "match" conditions just as the sun was going down. 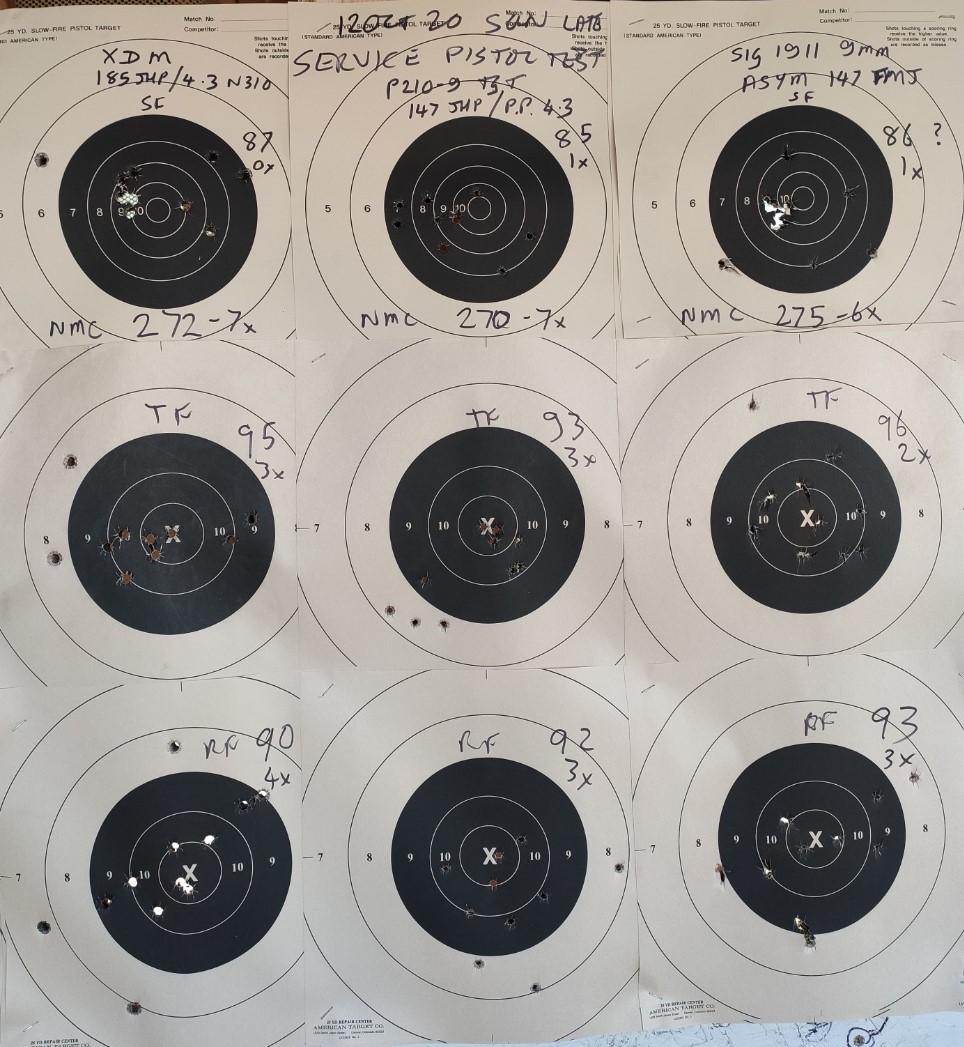 I will now have to repeat this test several times this week in order to decide which gun/ammo I will use at the OR State Championship this coming weekend. Surprisingly good result with the XDM (never shot it in a match) and the 1911 (first time with that ammo). I've used the P210 for the last 2 matches - won one, complete disaster the next! Got some head scratching to do now!

Radjag,
Beautiful slow fire with the wad gun. Great NMC!
All I can say about your service pistol test is, if I were shooting a leg match with you, I would hope it was late afternoon and you were using  any one of those three pistols!
JKR

The 45 score shot by Radjag has definitely raised the bar for me. I just had to try to better it but that’s a tall order.

Wish I had pictures like the rest of you but got rid of my phone when I retired.
JKR

JKR - good shooting with the Service Pistol. I was about to say you got me - then I noticed that you used LSWC! Gotta use Jacketed bullets for EIC Service Pistol

But no, seriously, all of this is just for fun and we only shoot against ourselves.

I would have got you today though:-

There are other inexpensive devices that include a digital camera and also have other useful functions (maybe add a Bullseye Timer?), but do not involve a cell phone. Mostly targeted towards kids, but do a bit of research and just find one with the features you like,

Radjag,
I’m low on jacketed bullets right now but cast my own lead so I have plenty of those.
Nice run with the 210. Is that your 1st choice for EIC?
JKR

Yes, jacketed bullets can be hard to find right now. Zero seem to be struggling to meet the demand. I recently got some from Everglades Ammo, but have not tested them yet.

I usually get my best scores with the SIG P210, but the trigger, whilst very good, is quite different feel from a 1911 and so I have to go through a kind of re-learning curve each time I shoot it - must remember to dry fire several times before an EIC match.

I also ran out of JHP ammo at the range yesterday and so could not test the XDM again. I will do a 3 gun test again tomorrow then decide. 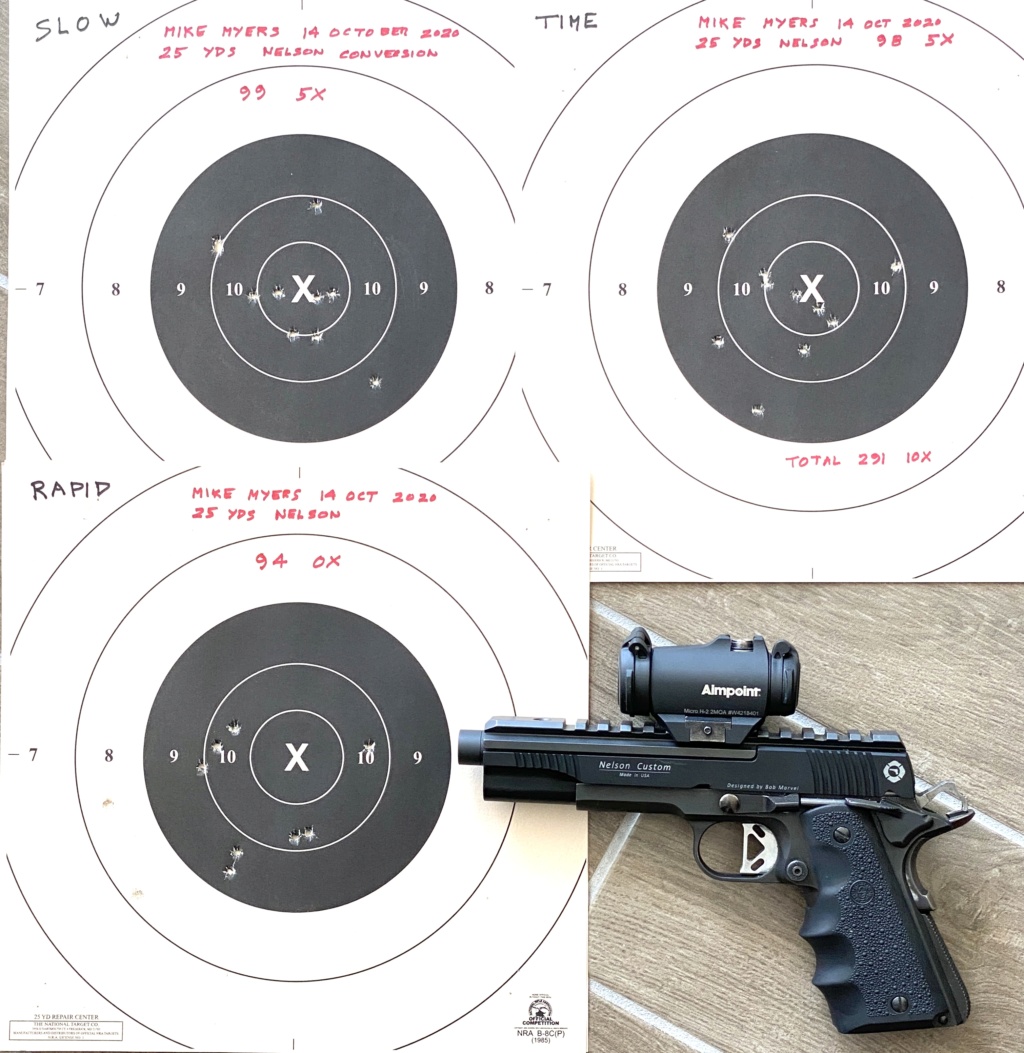 Does anyone sell a transparent template to make this easier?
I guess I can always make one, if I find a clear piece of plastic to mark up......

It has nothing to do with League Week, but since I was shooting my Model 52 two handed yesterday, I wanted to see what I could do with the Nelson that way.  Gee, I've never got a target like this from any gun in my life, regardless of how many hands.  If I could do my part one handed, it's nice to know that the Nelson can do this: 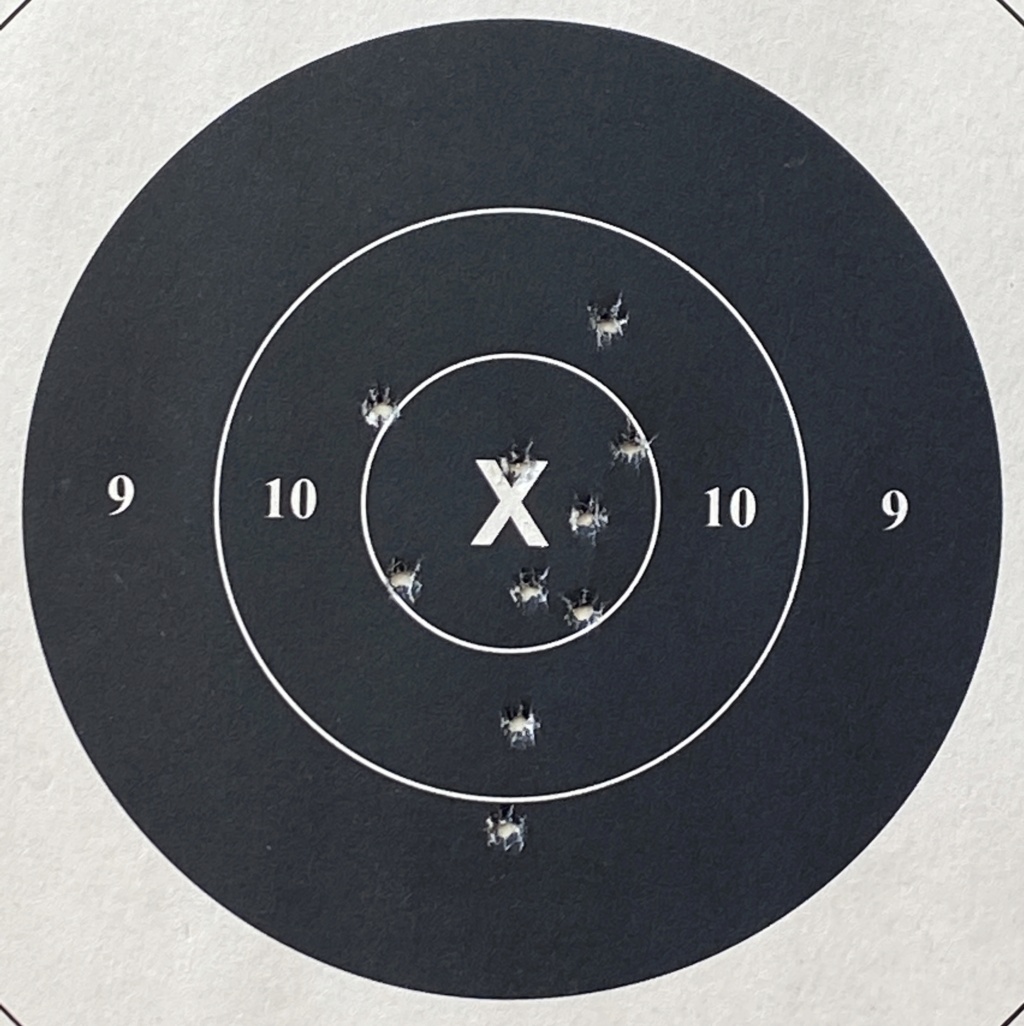 Does anyone sell a transparent template to make this easier?
I guess I can always make one, if I find a clear piece of plastic to mark up......

Lookee here, at my posts
https://www.bullseyeforum.net/t15621-scoring-overlay?highlight=Overlay

That's not quite what I meant - and a member here already sent me a spare that he had.

What I need is something the size of a B-8 target, clear, and with the scoring lines from a B-16 target.
If I shot on a B-8, or anything else, with this overlay I could tell what score the holes represented on a B-16.

What I did earlier, was to lay my B-8 target on top of a new B-16 target, and with a marker, indicate where all the holes were.  Then I could score it.  I suppose I could have used a pin, or a nail, but I didn't want to damage the B-16.

If all else fails, I'll go to a shop selling a sheet of clear plastic, and draw in the lines.  Then I can put it on top of any target, and see what the score should have been had I used a B-16.   :-)

Put your glasses on and look a lot closer.......I think you will find what you mean.

My glasses are OK, it's my brain that needs a refresh.

I printed out the B-16 25 Yard Slow Fire overlay, lined it up on top of my B-8 target, then held everything up to a light.  The holes showed up clearly, and yes, I could then score the target without all the hassle I went to before.

If I can get an 8 1/2 x 11 sheet of clear plastic that will go through my printer, I can make a better one that won't need to be held up to the light.

Made it to the indoor range tonight, not crowded any more.  They can't get ammo.

Had one misfire with the Aguilla Pistol Match, interesting, the box says it is "Ely Primed".  First time that has happened.  Otherwise has been working well.