FC60 posted a very interesting article re' taper crimp in another thread.

I am a newbie and was not aware of the history. The one statement that jumped out at me was that Giles produced more than 4,000 target 1911's over a 32 year career - that is 125/year or about 3 per week. I assume that he employed staff in a production shop?

The amount of testing he did is also extremely impressive.

I wonder what happened to all of those Giles custom guns?

99% of the Giles pistols that I see are extremely worn out. I picked up a 1965 colt 45 ACP kit gun last year that was built by Giles. It’s an extremely good condition but will beat the hell out of you when you shoot it even with light loads. Most of the pistols he built would require putting iron sights or iron sight rib on the slide, welding and re-fitting the barrel, and tightening the frame to slide fit and of course a trigger job. So three pistols a week would not be too difficult to complete. I wonder if he had his own test range due to the amount of time he spent on it.
I would shoot a SA RO with a trigger job, oversized slide stop pin and bushing before I would shoot an older 60’s built pistol in most cases. They’re actually better built than the older pistols. A RO barrel has full upper barrel lug engagement, where as the older pistols had either shimmed upper barrel lug, welded tab on the slide or accuracy tuner which reduces upper barrel lug engagement in the slide.
I’ve worked on the majority of old pistols by the old school builders; Shockey, Giles, Clark. I think Clark Sr in the early to mid 60’s built the best pistols out of them all. I’ve seen some stellar old Clark’s that were fantastic. I have a 5” 38 spl Kit Gun Clark built that is first rate.
Also just because a gun groups from a machine rest doesn’t mean it shoots good from hand. Those old guns unlock super fast and are unforgiving unless your on your game.
My long winded 2 cents...
Jon

I liken these old BE guns to 70's Muscle cars.

Great in their day. New ones are better. Far better.

To some extent, you have to consider what these old smiths had to work with.  Most of the guns they built up were built using production methods from the 1930s.  Part tolerances were huge by comparison and the maximum frame had to fit a minimum slide which both had to fit a maximum barrel... that they got decent results at all was a miracle.

Not to mention the High Standards Giles produced. 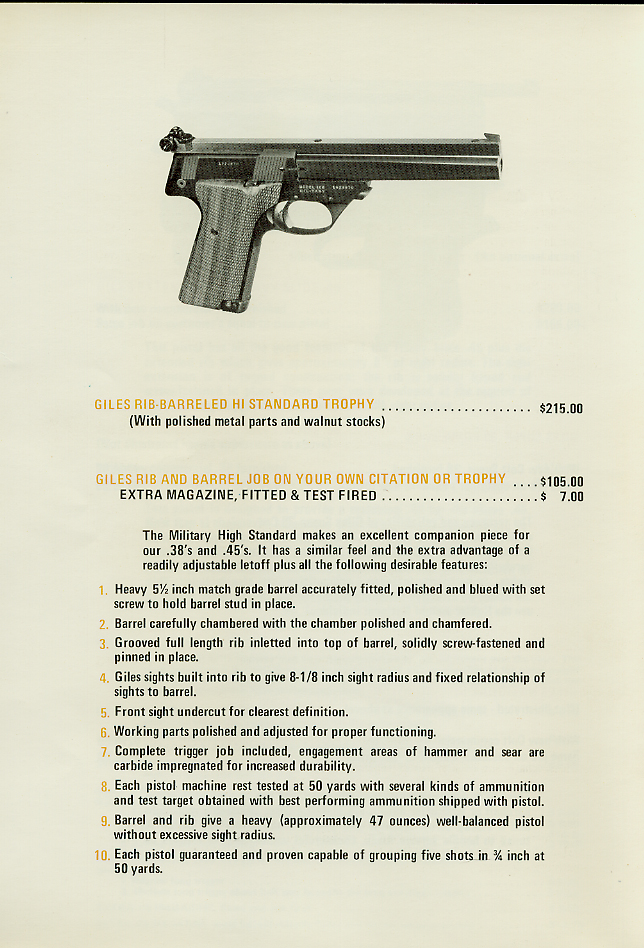 Interesting article, I know that when I went to a taper crimp for my bulleye pistol it made my life a lot easier.  Jon you mentioned the earlier generation of bulleye gun builders, have you ever worked on any 1911's by Bob Chow?  My Sayler built Milspec was redone by one of Bob Chows apprentacise and it shoots really well.

I have friends that have a collection of Giles pistols.  A few years ago they put the most used one in their Ransom Rest, it has over 250,000 rounds through it.  It still shot under 2" at 50 yards.

Steve B wrote:I have friends that have a collection of Giles pistols.  A few years ago they put the most used one in their Ransom Rest, it has over 250,000 rounds through it.  It still shot under 2" at 50 yards.

Years ago I traded for a Giles 1911 wad gun. It too was very well used, but not abused. When I finally machine rest tested it, like your pistol, it shot 10 shots into 2" at 50 yards.

While I am not a gunsmith and don't really care to know all of the details of the magic that is the fine grouping bullseye gun, earlier this year I picked up a very lightly used Giles 1911 in .38 Special. I've been wanting one for some years after I parted company with my 52-1. Beside the most beautiful blueing, as Colts of the 1950s vintage have, it shoots unbelievably well. Cycles smooth as glass, little recoil, functions perfectly even with the BME rail and a 1" Ultradot on the slide. I would buy a Giles anytime.

Interesting Jon, I did not know that.

I had a Madore , built on a Caspian kit and it shot great.