Hi
I have been shooting in a indoor 50' rec league , it's pretty small time but I enjoy it. A few months ago my wife joined us and she is better than me right out of the gate , even though I have been working hard at this for three years now.
Durring the fall we shoot 22, winter center fire , spring a 600 , 22 and center fire. Knowing the center fire is coming up I have been trying to get her to shoot my 45 to get used to it. Bottom line is she hates it. Hates the bang hates the recoil,  I'm pretty sure this will be the end of shooting for her unless I can come up with a softer gun.
I'm saying all this because I really think she could be good and hate to see her walk away .
So I'm wondering what  center fire I should look at that won't intimidate her .  I looked at the 32 target guns (pictures only) and it seems they all have magazine loading in front of the trigger.  In New York that makes it an assault weapon and  I'm not allowed near it.
Please offer any suggestions on what to look at, maybe 9mm or a 38 something.  I know very few Bullseye shooters and they all shoot 45.
Basically I can't just go try someone's gun , so I'm just going to have to buy something and hope for the best.
Any advice greatly appreciated.
Thanks  Tom

Yardage? RR or sand bag? Barrel twist? Are they all BE powder?

25yd, Neither, 1:16, yes. I did test some other powders but those were all Bullseye. I was using a Lee rest when doing these tests. The two targets below were shot from a sand bag at 25yds. 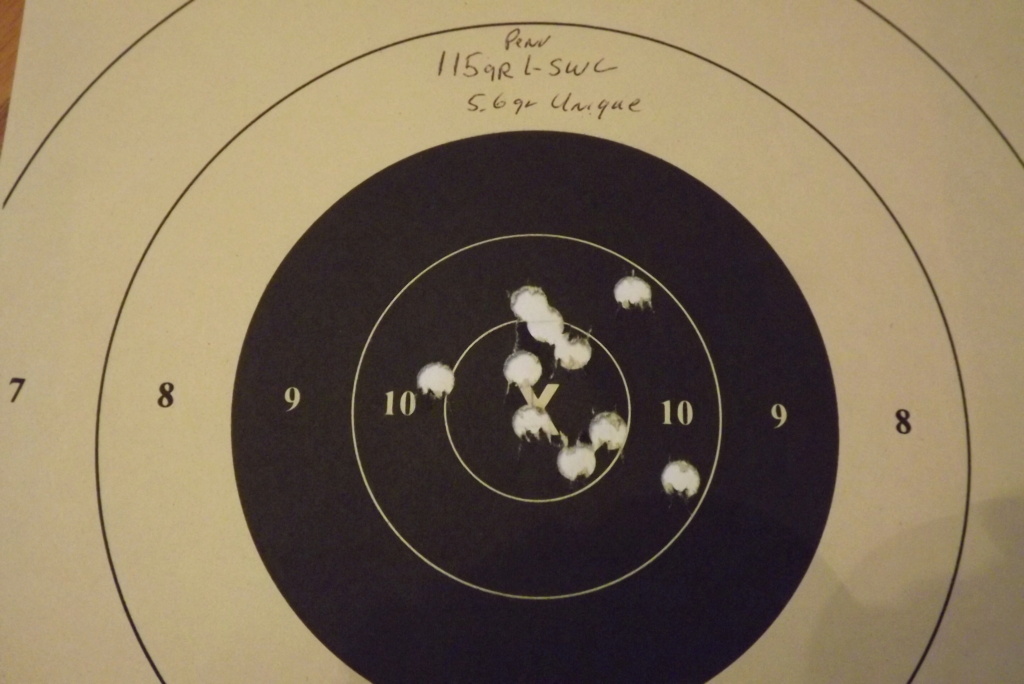 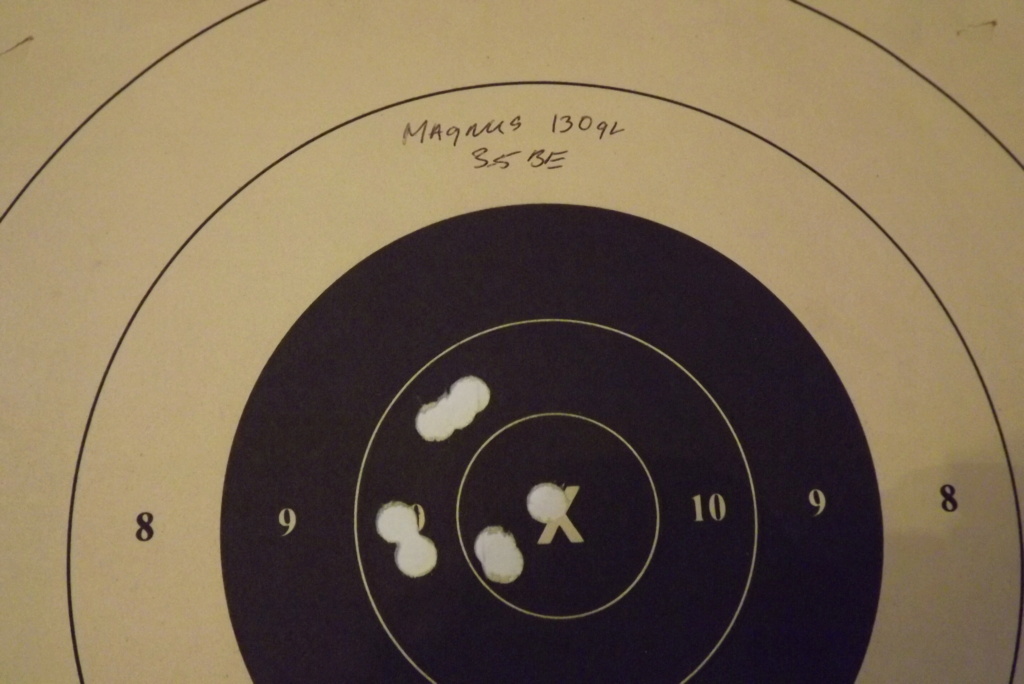 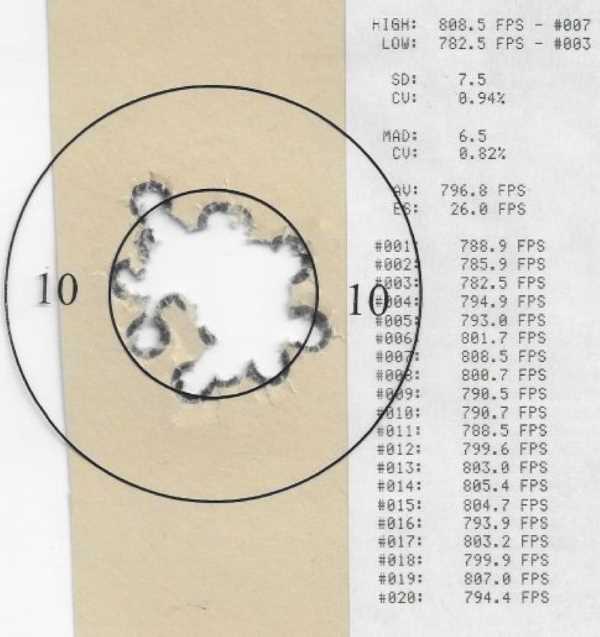 That looks like work from Dave Wilson, wouldn't expect any less.

[quote="thessler"]Hi
Indoor 50' rec league , it's pretty small time but I enjoy it. Durring the fall we shoot 22, winter center fire , spring a 600 , 22 and center fire. Knowing the center fire is coming up I have been trying to get her to shoot my 45 to get used to it. Bottom line is she hates it. Hates the bang hates the recoil,  I'm pretty sure this will be the end of shooting for her unless I can come up with a softer gun.
I'm saying all this because I really think she could be good and hate to see her walk away
Thanks  Tom[/quote]

Are we all missing the obvious here?

Why can't your informal league let your wife continue to shoot 22 throughout? A perfectly reasonable concession, under the circumstances. IMHO.

And yes, by all means make sure that her hearing and eye protection is absolutely the best available and fitted properly.

I totally agree, 22 only can be more fun and is plenty challenging. Only problem is you can't get regular classifications or win standard matches. It may be a personal decision based on how important classifications and being able to win a match are for her.

I agree the 50 yd. target above does look like one Dave would post.  Dave is a good friend and has contributed a lot to the results you see in that post.  The secret to getting groups like this one is using a quality bullet - especially the base.  His suggestions have greatly increased the quality of my cast bullets.  The particular bullet alloy in the posted test was linotype.  The bullets weighed about 139 gn.  I have gotten similar results with Lyman#2 alloy.  Those weigh about 144 gn.  I have been sizing them to .358" as I was getting a lot of leading when sized to .356".  Almost no leading now.  I do plan on doing more testing at .356 and .357" now that I have reduced the velocity.  I have also made some modifications to my Dillon Powder Measure to insure consistent powder drops and am using PhotoEscape's powder funnel allowing me to seat the bullet squarely in the case.  Bruce

I also totally agree with radjag on this. If your wife is shooting 22 and enjoying it, consider yourself lucky. If she decides she wants a CF pistol, she’ll let you know.
45 that recoils like a 22?! Come on guys!
JKR

Thanks guys
It's not an issue of shooting a 22 during center fire. They would let her shoot a sling shot if she wanted. She would feel very self conscious shooting a 22 when everyone else is shooting the 45.and would stop going.
Aside from that if I can get her to shoot a low power 38 with a little kick to it, I'm hoping she will get comfortable with that and maybe next year the 45 won't seem so bad. Just trying to give her options to keep her interest up and keep her in the game .
Thanks , Tom

No need to feel self conscious shooting 2700's in .22 Only Class. The class was instituted for any man or woman who's not comfortable with the recoil of CF/.45 shooting for physical reasons or for those who just don't want to invest in expensive CF/.45 target guns. You'll see several in the class at most matches these days.

I like shooting powder puff loads. I usually use 3.4 gr BE 185 for short line with slide mounted optic. It’s a friendly load. Very soft, brass lands on the bench. In cooler temps I bump it up to run.
Jon

Well, OK, if we must

I have a S&W K16-4 which is chambered for 32 Magnum. They are quite hard to find these days. Might be tricky to get the trigger weight up to NRA CF spec. I put a rail and, currently, a 1" UD on it. I bought it to "cheat" in Harry Reeves matches

It is quite a heavy gun, might be too much of a handful for your missus (it almost is for me!) and of course shooting a revolver well in TF/RF is a real challenge, but very satisfying when I do have a good round. I Double Action the four shots in TF/RF cause my fingers are on the shortish side and I find it cumbersome to cock the hammer manually. She would really put the boys to shame if she eventually beat them with a revolver!!

Factory (any brand) 32SWL wadcutter loads (or 98HBWC bullets over ~2.0 Bullseye) are so quiet and soft in this heavy gun that you could easily mistake it for a 22. VERY accurate out to 25 yards. I bought some Starline 32 magnum brass and use Hornady XTP100 JHP bullets over 4.0 Power Pistol. Still very little recoil and dead on at 50 yards.

For a factory 1911 - at one time I had an STI Range Master in 38 Super, factory fitted with a Bull Barrel and an extended shroud frame with a heavy, square slide. It was an absolute tack driver, but not legal for CMP Service Pistol so I sold it on to a lucky guy on this Forum. You could load down 38Super with a 124 or 147 bullet as suggested by others and it would be very soft recoil (but still much louder than a 32SWL WC).

I have tried all kinds of recipes for 9mm, but have not found any really soft loads that are accurate enough even for the short line. Both of my 9mm guns tend to be snappy with good loads for 50 yards, but I am gradually mastering them for CMP Service Pistol. YMMV.

Radjag, it sounds like that revolver is too heavy for you. Maybe I have something to trade for it. Is it too soon to offer primers for guns?

. I like Virgil's idea about light 38 loads. I use 110gr XTP's. But I shoot them a tad hotter for accuracy.

Revolver for a low recoil

Across Europe and Australia in the old days .32 revolvers were used for Centre Fire ISSF style. I don't know your course of fire but if it is precision and duell then a match revolver like the Manhurin MR 73 with .32 S&W Wadcutter is a low recoil accurate set up.
Else try and get a Hammerli 240 in .32 S&W Wadcutter.
Erma once made a /32 S&W L wadcutter which had a traditional mag in the grip.

I'[m surprised no one suggested a Walther 32. It is a local match more fun shoot than national competition and would continue a husband & wife shooting night. The 32's are just above a 22 recoil and nowhere near the 45 in any loading. Not the bang of a 38 either.

A .32 Pardini, Hammerli, Walther or any of the like would have less recoil for sure. While I love shooting .45 and with 185s and 3.8gr of Clay's is relatively light in recoil, I am shooting a .38 Spec. Giles for centerfire just for fun and something different. It does recoil lighter than the .45 and really makes you work on followthu. Can only help my .45 shooting right? I prefer the 1911 ergonomics myself. I'm using Hornady 148gr hbwc and 2.8gr of Bullseye with a slide mounted dot.

Check out the ERMA that just went up for sale on commercial row.