I recently acquired a 1952 mfgr S&W K38 and was able to shoot it, even though the range was very busy, the day after Thanksgiving. I only wanted to "zero" the pistol, and due to the number of people at the range, was only able to get it centered at 7 yards. Which is not particularly stressing for the shooters here.

But, for the first cylinder, I was blowing out the X ring on this 300 reduced rifle target. Then the group got larger, but overall, this pistol seems to be more accurate than normal. 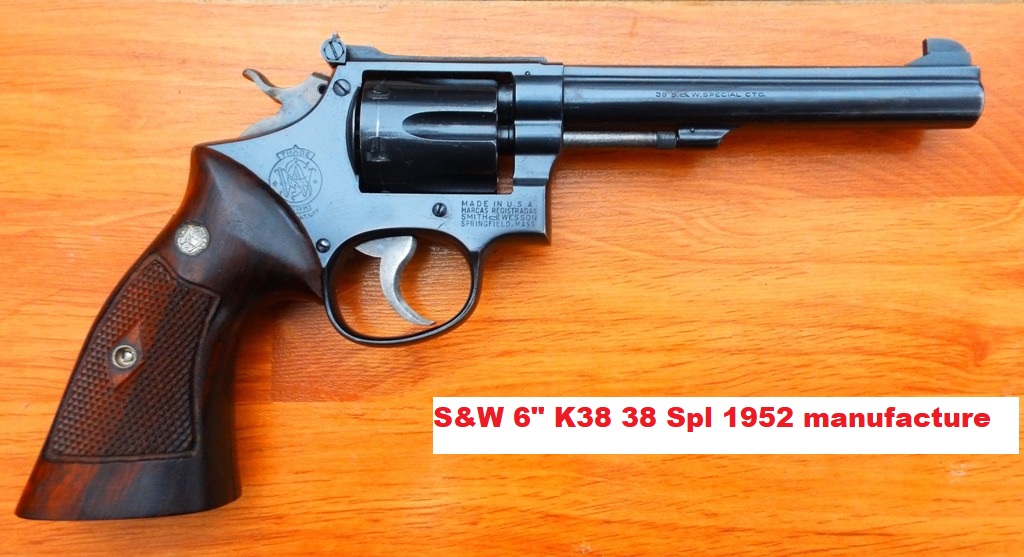 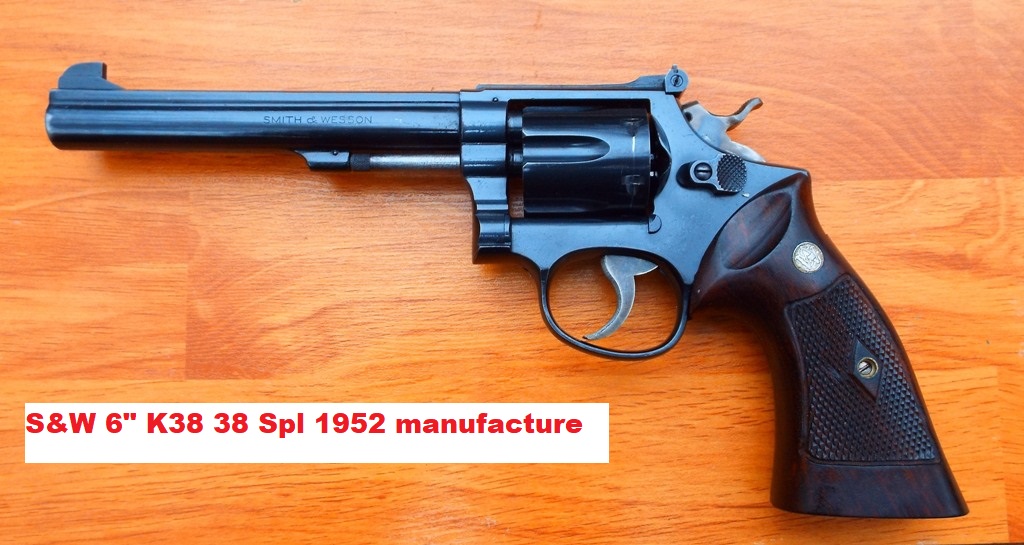 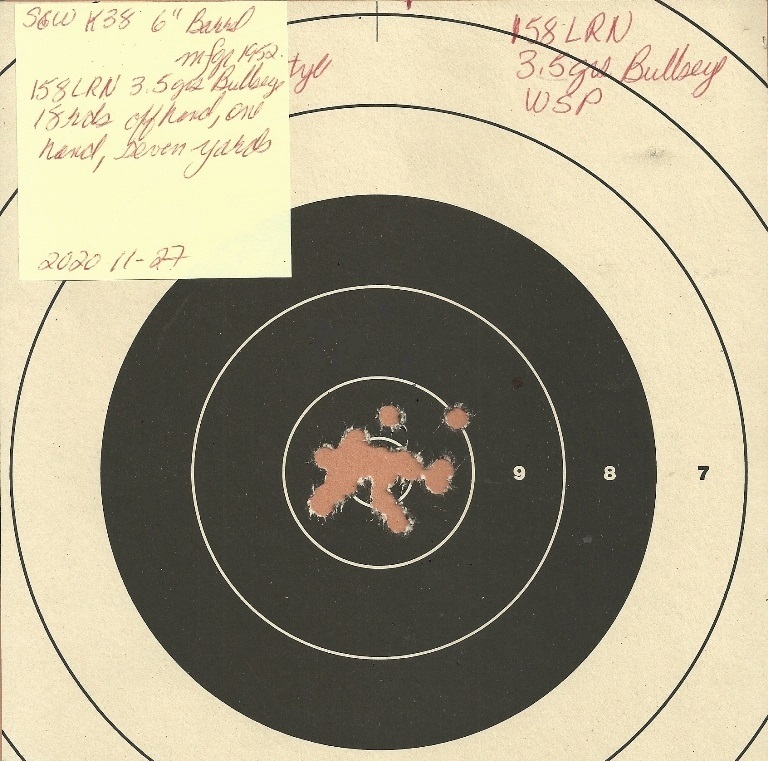 This is the first 5 screw K frame I have fired (I have a unfired Victory Revolver) and my impression is that the action is unusually smooth, the trigger fantastic. But then all my S&W triggers are fantastic. What I would like to know, were these considered target revolvers as is, and were they popular when shooters used the 38 Special?


I did shoot 50 rounds with a 148 LWC 2.7 grains Bullseye, and that load hardly recoiled and put nice big holes in the target. My 158 grain load normally goes 760 fps in a four inch revolver, and this load has just been wonderful for every 38 Special I own, even though it won't shoot to point of aim in revolvers regulated for 125 grain bullets. The older revolvers all seem to be regulated for the 158 grain bullet. And they also shoot well with the 158 grain bullet.


The 158 grain load also shot well, for a snubbie. Generally it is going 680 fps in a two inch barrel, plus or minus, depending on the pistol. 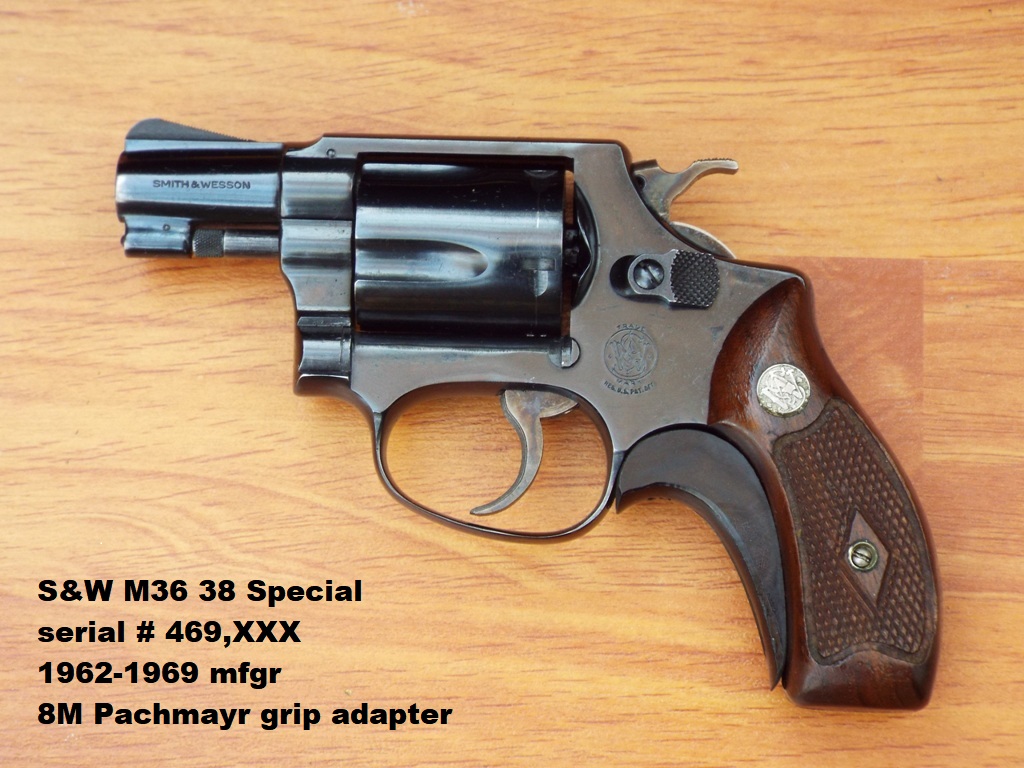 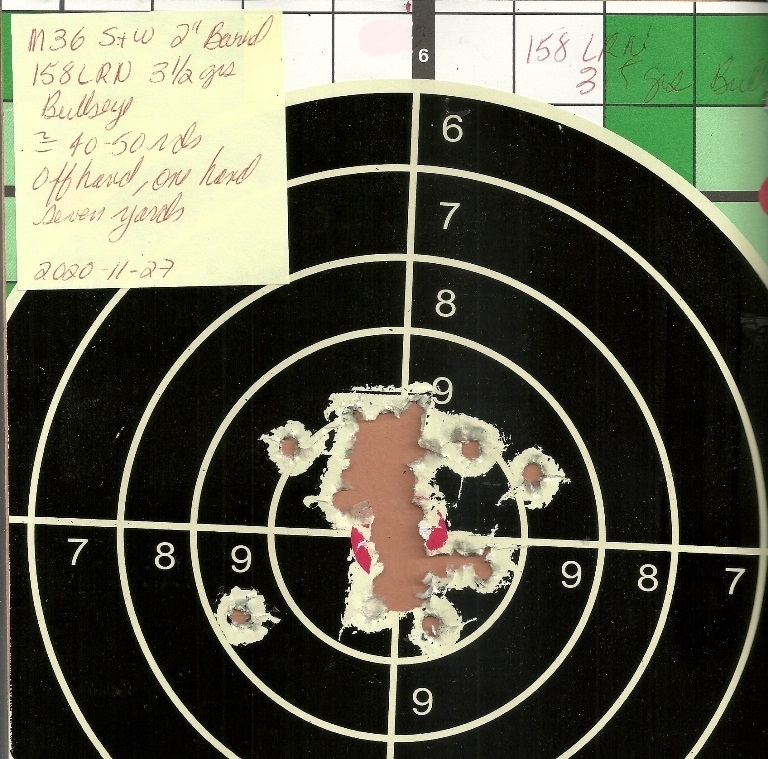 Yes, the K38 (later M-14) Target Masterpiece is indeed one of the must have CF revolver for Bullseye using the 148 gr WC/2.5 gr BE load, and for Distinguished Revolver (NRA) using your 158 gr load.

How it does in my hands, and my eyes, will not be a fair test of the inherent accuracy of the pistol.

I have  not taken the sideplate off this K38, I am wondering if these were as safe and durable as the later K frame models.  An examination of the lockworks of my Victory Model shows a serious design defect that can make the revolver unsafe.

This is the hammer block, a spring that is pushed out of the way by the cylinder hand. 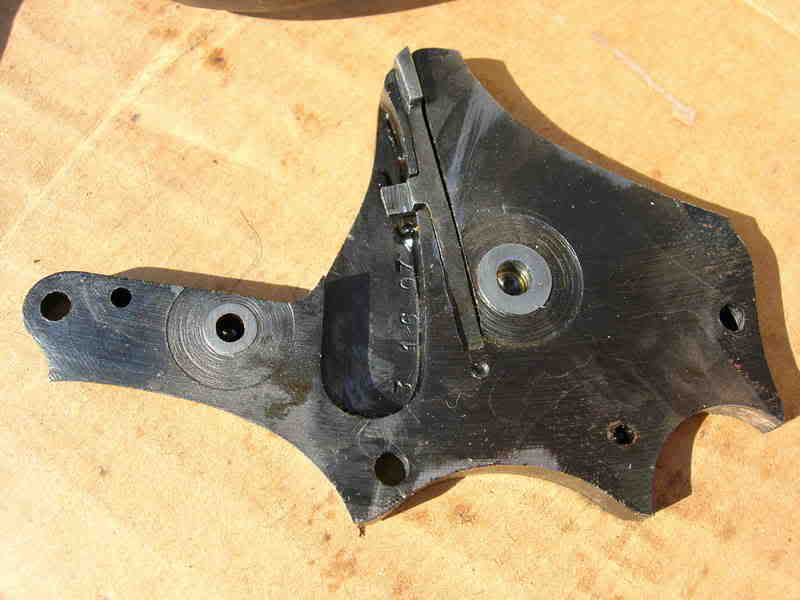 You can see the inclined surface on the cylinder hand which pushes the spring down. 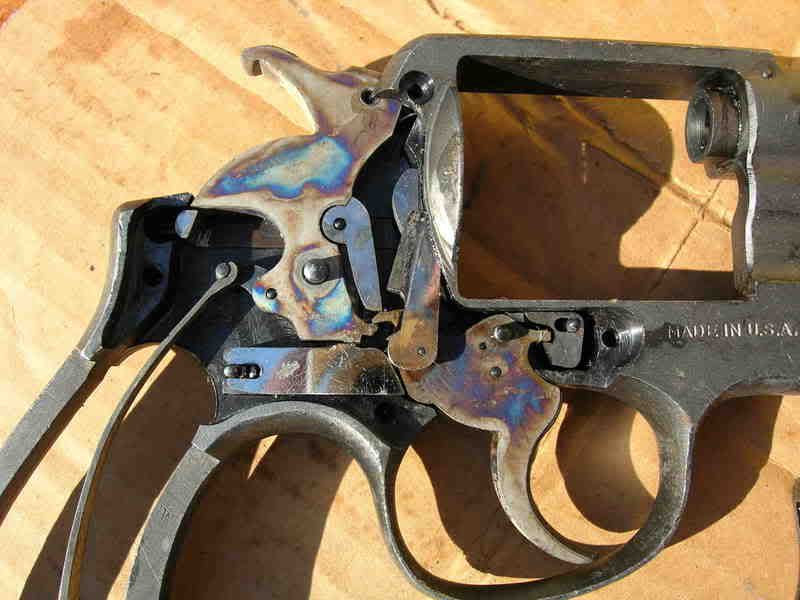 When I cleaned the cosmoline out of this pistol, that firing pin block spring was stuck down in its groove. I am certain given enough crud, the thing would stick, and the owner would not know that a blow to the hammer would result in the firing pin contacting the primer.  Hence, this mechanisms fails in an unsafe mode.


I do know that that upper sideplate screw will loosen and fall out!. Had that happen with a N frame in 45ACP. The higher the external screw count, the more likely one will unscrew and fall off.

The K 38 is a later model than the Victory and as far as I know has a different safety design.

Even without the hammer block, though, it would be fairly difficult to make the gun go off accidentally, especially if target shooting.

Routine maintenance will prevent all that.

The American Rifleman just had an article on the Victorys.
There was a mention of a rework of the block safety after a fatal accidental discharge.

james r chapman wrote:Routine maintenance will prevent all that.

One of these days I will take the side plate off and blow in brake cleaner, followed by compressed air.

I have no desire to put this in a holster and carry it on my belt, and I do not have it loaded except when on the firing line, so safety or not, I am not worried. Nor am I worried about shooting a series 70, as I don't plan to drop it on its muzzle at a match. I am of the opinion a firing pin safety is  more trouble than it is worth on a 1911. The things fail anyway, I have a Colt series 80 in the garage that I plan to remove the trigger parts, and the firing pin block. The block is shoved up into the slide and does not hold the firing pin.

Just so you know, that disqualifies it for BE competition, and legally speaking, it isn't a good idea either.

bruce martindale wrote:Just so you know, that disqualifies it for BE competition, and legally speaking, it isn't a good idea either.

I have other pistols that I use for Bullseye.

Legally?  What law requires a pistol to be series 80?  Tonight I took out the firing pin block and installed a series 80 to series 70 conversion shim.

This is what the pistol looked like until now 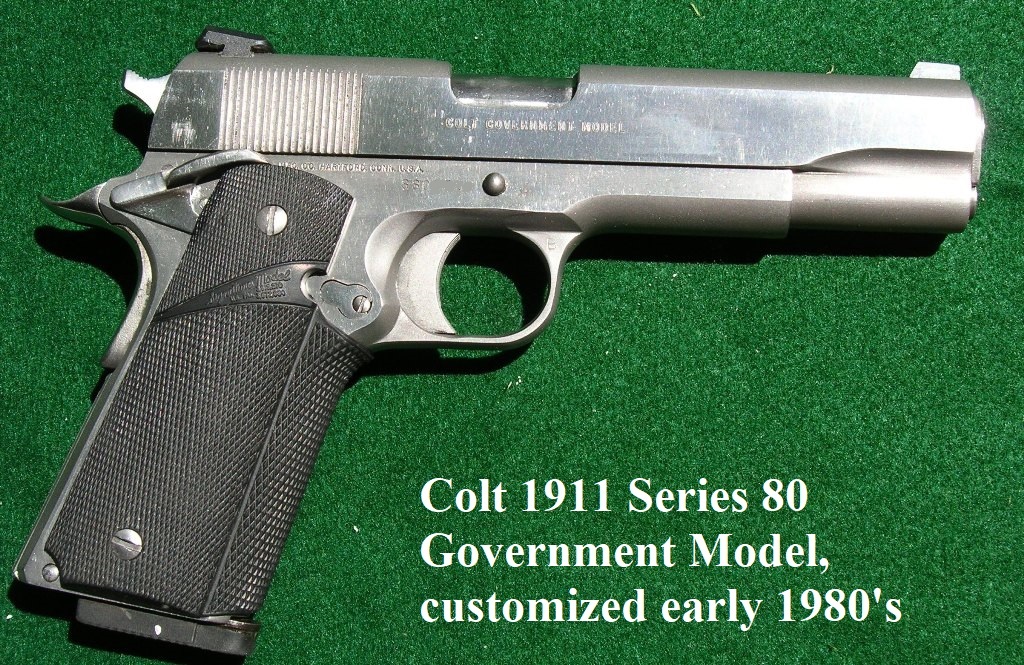 years ago I removed the collet bushing, when a finger broke off a collet on another series 80 pistol of mine 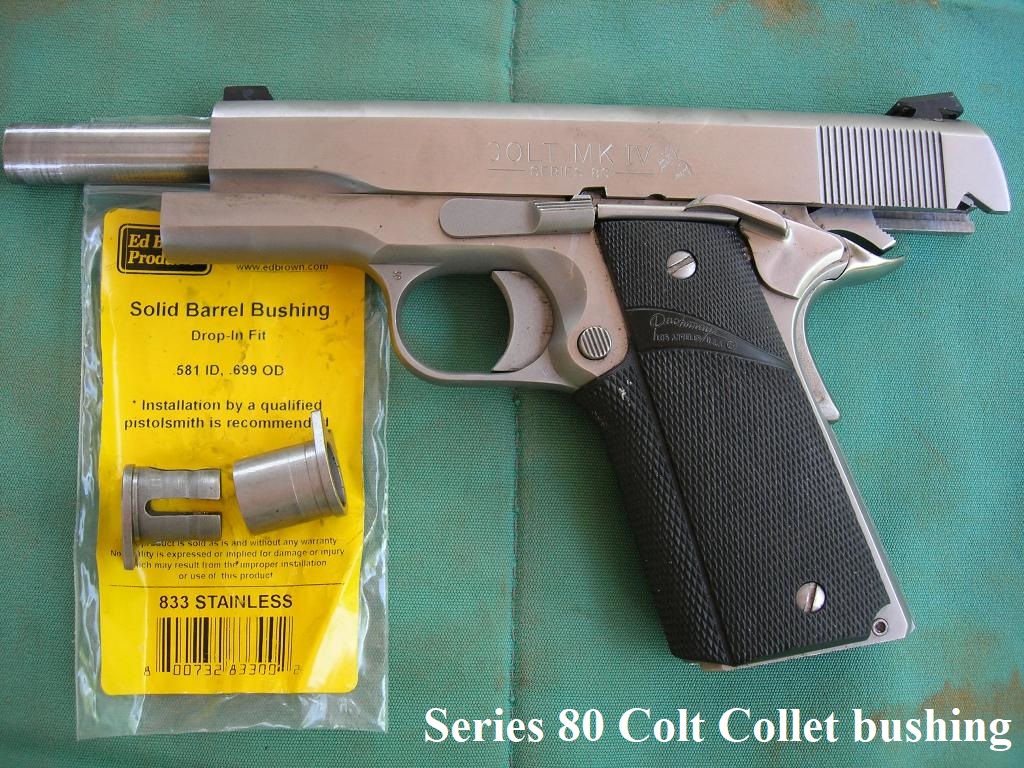 and recently, I did this: 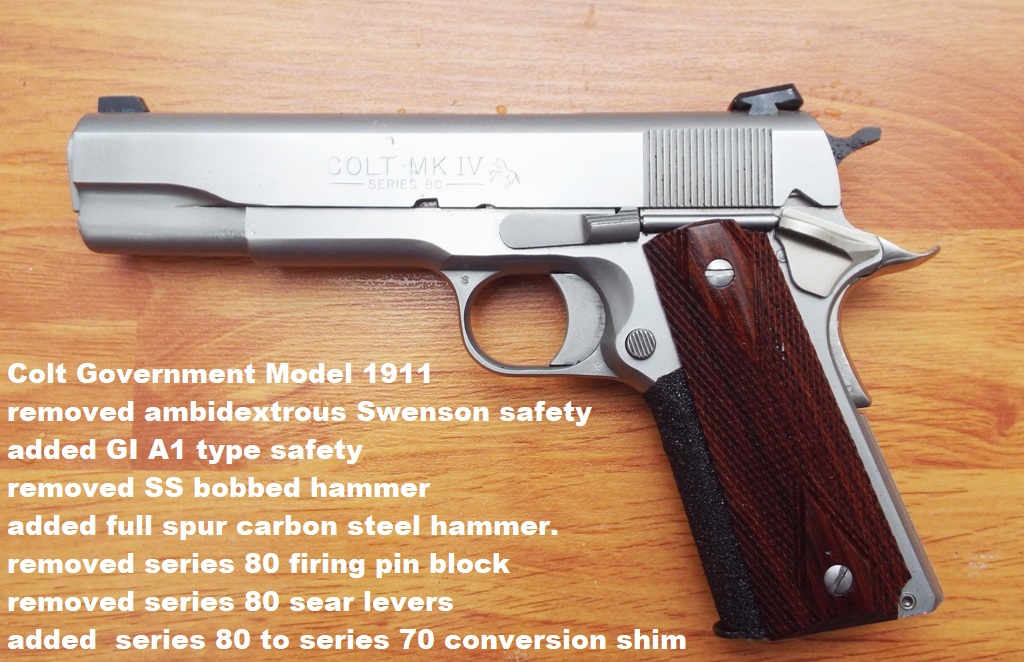 Ambi safeties just get bumped off when you don't want them off, or on for that matter. I want to thumb cock my hammer, and lower my hammer on a round in the chamber. I think cocked and locked is dangerous, too easy to have an accidental discharge. The series 80 levers and firing pin block I would have left in it, except for the fact the firing pin block was not working. 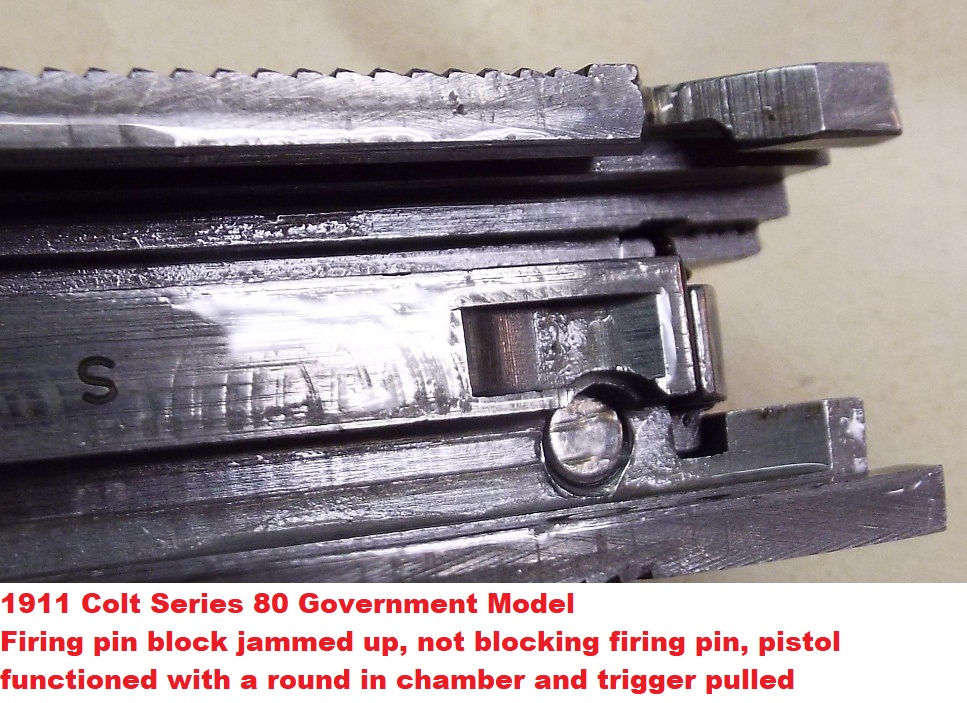 Even though the pistol functioned fine with the firing pin block jammed up, the fact that it is not working, and then could drop down and cause who knows what problems, I took the thing out. It took about one half hour of tapping on a block of wood, moving the extractor back and forth, but I got the thing to drop down, and I took it out, removed the trigger levers, and it is very close to the original 1911 configuration ignition system.

And this is not a Bullseye pistol, it is not accurate enough to be a Bullseye pistol,nor am I going to use it as one. Maybe there is a law enforcement group coming to my door, to arrest me for converting a series 80 to a series 70,

but I am willing to take that risk.

You misunderstood, tampering with a factory safety could cause liability, but as you point out it isn't working correctly so that's a problem too.

No need to get bunched up here