Hi
How important is eye dominance in bullseye?  I know in shotgun sports it's huge.
Reason I'm asking is I'm starting to switch from right hand shooting to left. I am right eye dominant,  I normally use an aperture to make the dot round and use a piece of tape on the inside corner of the opposite lense to block out the other eye.
So if I stick with the same system and just swap the tape and aperture , shooting with my non dominant eye will it matter ?
I'm trying this now and it seems to be working fine. I have read many times the importance of shooting with your dominant eye. I have also read of some shooting with one hand and holding the gun in front of the opposite eye, so it must be very important to them. Just wondering if my setup will work fine or am I handicapping myself in some unknown way.
Thanks , Tom

From what I've seen people try both ways, switching eyes or changing stance and grip to accommodate the dominant eye.

For pistol, I'm left eye dominant and shoot bullseye with right eye and blinder on the left.  I shoot rifle and shotgun left hand to accommodate the dominant eye.  Just grew up that way.

After right shoulder surgery, I shot left hand / left eye for about 6 months and did about the same slow fire.  Didn't have to do it long enough to get TF / RF to what I was doing right hand.

Most important parts to me are the visual acuity of your chosen eye and how well you can coordinate what you see with the trigger process, stance and grip.

I'm mostly a rifle shooter but I am right handed and left eye dominant.  I started shooting before I knew of such things so I shoot everything right handed and use a blinder/tape over my left eye (or close it if I'm in the field).  This does not appear to have negatively affected my rifle shooting as I have still won open national championships with the NRA and USA Shooting.  I don't THINK it holds back my pistol shooting, at least with a dot, as I do fairly well there given the amount of training I have done for it.  For irons, I'm not sure.  My visual acuity is a bit less in my right (but still 20/20) and I do have dry-eye issues that I don't have in the left which can cause more focus issues.  This normally doesn't matter for my match rifles (unless it's really dry) due to the aperture rear and ring front sight but post front sights are more sensitive.  I find a center hold helps with that (rifle and pistol).  If I was smart I would probably get some left-handed grips for my match pistols, but stubbornness often defeats intelligence!

After a right eye injury I lost the sight for few months as it healed and was bandaged. During this time my JRNRA Rifle was put on hold. My MD and coach discovered that my brain taught my left eye to take over. So for several months after my eye healed my left eye was covered up when doing sports and shooting to retrain my brain. Eventually my right eye dominance returned. But...

As mentioned above I learned while learning Trap shooting that there were times that my left eye would take over. I also learned to use opaque tape to obscure the front bead so only my right eye could focus on it!

As a (POST) firearms instructor I have shooters use the same "trick" if they are opposite eye dominant. With intense practice they train their brain too!

The only time I've seen a shooter have to permanently switch was due to injury. 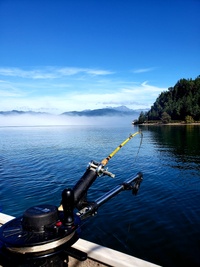 Thanks for the replys.
I might be one of those guys that have to permanently switch.  I seem to be doing okay with the eyes , blanking out the right. My left arm wants nothing to do with this plan. Almost impossible to keep it in the black.  New challenge .
Thanks, Tom

thessler wrote:Thanks for the replys.
I might be one of those guys that have to permanently switch.  I seem to be doing okay with the eyes , blanking out the right. My left arm wants nothing to do with this plan. Almost impossible to keep it in the black.  New challenge .
Thanks, Tom

I just did a little dry firing using a blinder over my right eye while shooting right handed.  The position felt fine and the sight picture seemed more bright and clear.  Why haven't I played around with this more? I think I'm going to shoot Winter Airgun in Alabama that way this weekend.  I haven't shot air pistol in about five years so it's just about like starting over anyway!