I am once again attempting to get my Nelson conversion to
function at an acceptable reliability with standard velocity ammo.
When I got the conversion I tried it on two different frames and
both had similar issues.
Both frames had #17 Lb. main (hammer) springs and both would have
rounds that failed to chamber all the way. When the firing pin strikes these
not fully chambered rounds, the strike pushes the round into the chamber
and energy is lost in this way. A second cock of the hammer always results
in a fired round.
I have reworked the hammer face on one frame to when the slide cycles, it no longer contacts the bottom of the slide
so, not energy is lost there. I have tried all of Nelsons springs and some from FGW (Marvel) with mixed results.
The plunk test shows the rounds ( of five or six) different brands of ammo
sitting out of the chamber when the barrel has as few as ten or fifteen round through it.
A clean barrel will allow a few brands to plunk to a fully seated position.
the barrel was sent back to Nelson and examined and polished up in the chamber
but it didn't make any difference.
I'm wondering if any other Nelson owners have had this issue.
G 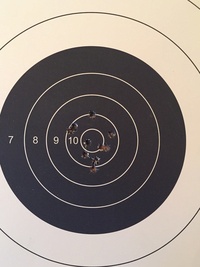 Have you checked to make sure the top of the magazines are not touching the extractor in the Nelson? I would suggest a 19 lb mainspring but if ammo is failing the plunk test after 10 or 15 rounds, then it's clearly more of a chambering issue. I've had lead build-up at the end of the chamber, just before the rifling. A bent brush wouldn't clean it out so it needed a little more attention.

I had a similar issue recently.  Larry gave me his usual speech about clean barrel etc.

My FTF's were happening in one or more rounds per mag...totally unacceptable in a gun that had always been 99% + reliable.  Larry did not think it could be the main spring.  Unfortunately Larry was wrong.  I replaced the main or hammer spring if you prefer with a new 19# spring and reliability has returned to 99% +.

Give a new main spring a try, it might solve your problem.  bob

If you have a high magazine catch installed on the frame, try swapping it for a normal one.

19# mainspring spring in mine also
100% with CCI and comparable ammo.

15lb MS and sandard 9lb recoil spring in mine, AA conversion so not apples to apples. I wonder if chamber needs to be reamed just a bit longer based on plunk test. 19lb spring may be an alternate solution to the root cause.

Don't know if this is relevant but I have model 41 that fails the plunk test in the same fashon. Clean chamber plunk all day long , after a few rounds it won't. Not a propper fix but if I oil the bullets it will run perfect,  never skip a beat.
Tom

OK, I will try a #19 LB. main spring and see how that goes.
My thinking on this is there is another issue here. Too tight chamber,
I have already sent the unit back to Nelson once and now that they are offering a larger chamber option
I will ask Larry if they can rework mine.
I did try Agila yesterday with a #7 LB spring yesterday and had good results for 50 rounds.
I will see if I can get back to the range today and test this more.
This may or may not be an option as in this case of Agila I have been having light loads that will not pick up the
next round in my SPBE. We will see if they show up in the Nelson.
Thanks to all who replied.