These are the first fifty yard groups from a RO with a new barrel / bushing fitted by Willie and Jon Shue over at DRC.
In all cases horizontal spread is two inches and under.  Can it be possible that the vertical stringing is just something I may be doing wrong in using my RR?  I have it rigidly mounted to one and a half inches of plywood and am using the recommended three-clamp pattern to a very rigid steel and concrete base (half inch steel plate is elevated with six concrete anchors so you can get your clamp under it. I haven't yet checked to see if the anchor bolts are loose but I will).
Zero 185's at 780 f/s via Clays.  (I have a lead on some Federal GM Match ammo that I will also test)
I only put fifty rounds through it before firing these groups (is the barrel still settling?).
I recall now that I used the extended ledge (recommended) AS WELL AS the slide (bad), to push on in returning the gun to the firing position so maybe this alone is the cause.
My fault that DRC did not RR the gun.  I was passing through the town returning from the coast; it was done but Jon, the one who RR tests the guns there, did not yet get to it and I picked it up anyway to avoid having to make a special trip from home a week or so later.
I'm pretty sure this is a two inch gun and the vertical spread is me or the RR; not the gun.  Groups prior to the accuracy work averaged 4.25.  I don't recall if they were also strung vertically.

I had a long chat with the head honcho at RR.  Most people over tighten the “star knobs” that clamp the pistol.  They should be torqued “finger tight “ which, if you want to put a number on it, would be 30-60 INCH POUNDS or about how tight you torque scope ring screws. If that is ok and you still get vertical, then adjust your technique in the reset of the rest.  Steve Huff at Accuracy X manually pulls the gun clamp to the rear stop then pushes it forward.  Seems to work for him.

Tighter pistols that come out of battery harder (unlocking with a snap) usually exhibit vertical stringing from RR until they get some mileage on them. It’s actually easy to build a 1911 to shoot good from a RR, but they’re normally looser pistols using recoil spring pressure for lockup.
Jon

With the Random Rest I also have experienced groups that "string" vertically.

Try this. Install a heavier recoil spring. This will keep the barrel from dropping down too soon.

Watch how steve at AXI does it on utube.

Did you say you "clamped" the wood base to the metal pedestal?  I never had any real success with clamps, no matter what the foundation or ransom was mounted on.

And we had issues with metal to metal / concrete mounted ransoms.  There seems to be the need for a thick, dense wood interface to reduce the vibrations or something.

We use the ransom bolted to a thick wooden based and then that base is separately bolted to the support base using anchor bolts in the concrete base.

That seems to proved sufficient dampening effect with the wood base rather than metal to metal; but the bolts firmly secure the wood base to the foundation.  Once torqued in and set up and a few shots, its usually very consistent.

If you draw a diagram showing the forces acting on the RR just before trigger actuation, you'll note that there is a force acting from the base upward through the height adjustment (hemispherically-tipped) screw. If that force is close to zero, then that tip is barely in contact (or say 0.00000001" above the base), even if it made an audible sound when contact was first made, and recoil will rotate the pivot to a some final angle. If you can manage to "preload" the contact point with a larger force (by resetting it with a large torque), using static friction from the friction pads to help hold it in place, then recoil must first overcome this preload before it starts to rotate. The final pivot angle will be less than the case noted above, and that shot will go lower. I agree that the grip tension is important (as noted), but IMHO vertical stringing is an inherent consequence of using a rotating (thrust washer geometry) friction pad that is not insensitive to temperature, humidity, frictional heating, wear-in, etc. The friction pads are used to brake the rotation, but they also have an effect on that static upward force during the "resetting" process. I reset mine by pressing it on a small neodymium magnet on the base. This creates a more consistent force between the base and the tip between shots. I see reduced vertical stringing when I use it (more circular shot patterns).

I recall somewhere seeing a system that stops the rotation using an air cylinder(s) (as a damper), rather than friction. The pivot itself is a (~frictionless) ball bearing. That would be my design as well.

[quote="CR10X"]Did you say you "clamped" the wood base to the metal pedestal?  I never had any real success with clamps, no matter what the foundation or ransom was mounted on.
[/quote]

Yes, unfortunately I have to clamp the 1.5 inch thick wood base to the plate that is set in concrete.  I'd like to drill through the plate but I'd need my club's approval.  I was thinking of going with four clamps rather than the three that is shown on the Ransom site. Another thought is to place three steel, 2x2x 1/4 steel plates right where the clamp's foot touches the wood base to maybe reduce any compression flex in the wood?

Looks like my original attempt at including an image, failed. 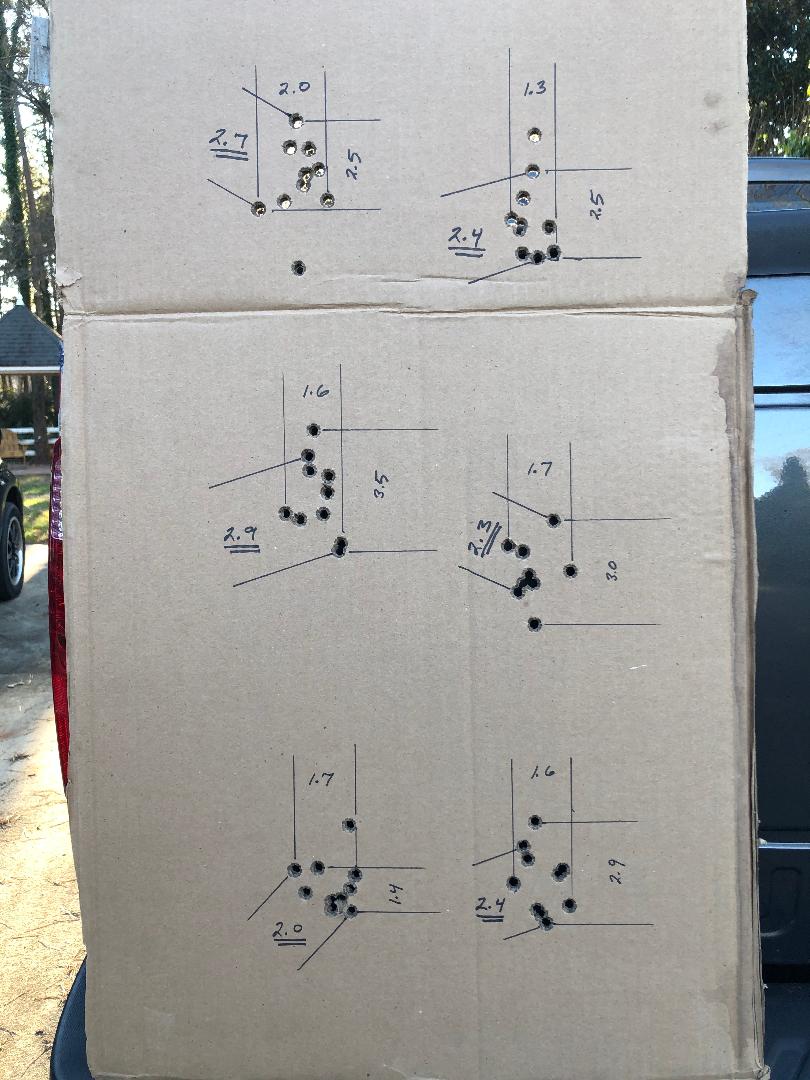 You're probably flexing the clamps as much or more than the wood.   But try more or a different pattern of clamping and see what happens to your groups.

It might be easier to put on a bigger metal plate on the base and then bolt through that base through your wood base?  Kinda like an adapter plate.

Can you post picture of your RR and specifically how it is attached to 1 1/2 wood plate?  You might have issue right there.  Also, I second to CR's suggestion, and would look into mounting RR on more solid base.

In my experience, every newly rebarreled gun I ever Ransom rested would vertically string.

When I barrel a pistol it’s pretty snappy unlocking from battery. From hand they shoot on call with no vertical stringing. Almost always will from a rest. But from the rest it will typically have a cluster with a few vertical flyers.
Jon

[size=15]Good advice guys.  See original and new clamps in photo which made stringing completely disappear.  Group shown (This one using Federal Match but similar groups with my own Zero loads) was typical with the better clamping method.  Not bad for a RO purchased used and a new barrel/bushing installation by Deep River Custom, which set me back $366.[/size]