I have a new Mark IV and have put a red dot on it. I removed the front sight and I'm wanting to remove the rear.
Question: does it unscrew from the upper like the front or does it need to be driven off?

Thanks in advance for your help.

Pretty much all sight pushers are designed to be used with flat surfaces like those typically found on semi auto pistol slides, and since the Ruger receiver is round you'll generally have to remove the rear sight without one.

After removing the elevation adjustment screw the rear sight is removed by clamping the receiver sufficiently in a large vise with padded jaws (leather or plastic) and carefully driving it out of its dovetail (I don't think that the dovetail is tapered, but it's been said that you should tap it out from right to left as you're looking at the rear of the receiver) using a brass punch and hammer. Some have had success placing their pistol on a roll of duct tape laid flat on a workbench and whacking away at it...either way the process will usually take more effort than you think necessary.

I had originally purchased a set of Williams FireSights to replace the iron sights on my Ruger Mark IV 22/45 Lite pistol; replacing the front sight was easy, but when it came time to consider how I was going to replace the rear sight I stopped. Long story short, after a new eyeglass prescription that had rather effectively corrected my moderate level of astigmatism, I was then able to use a red dot sight without the dot appearing as a starburst or sideways alien looking number 8; I opted to install a Vortex Venom red dot on the pistol using a Lobos Industries low profile mount, and couldn't be happier: 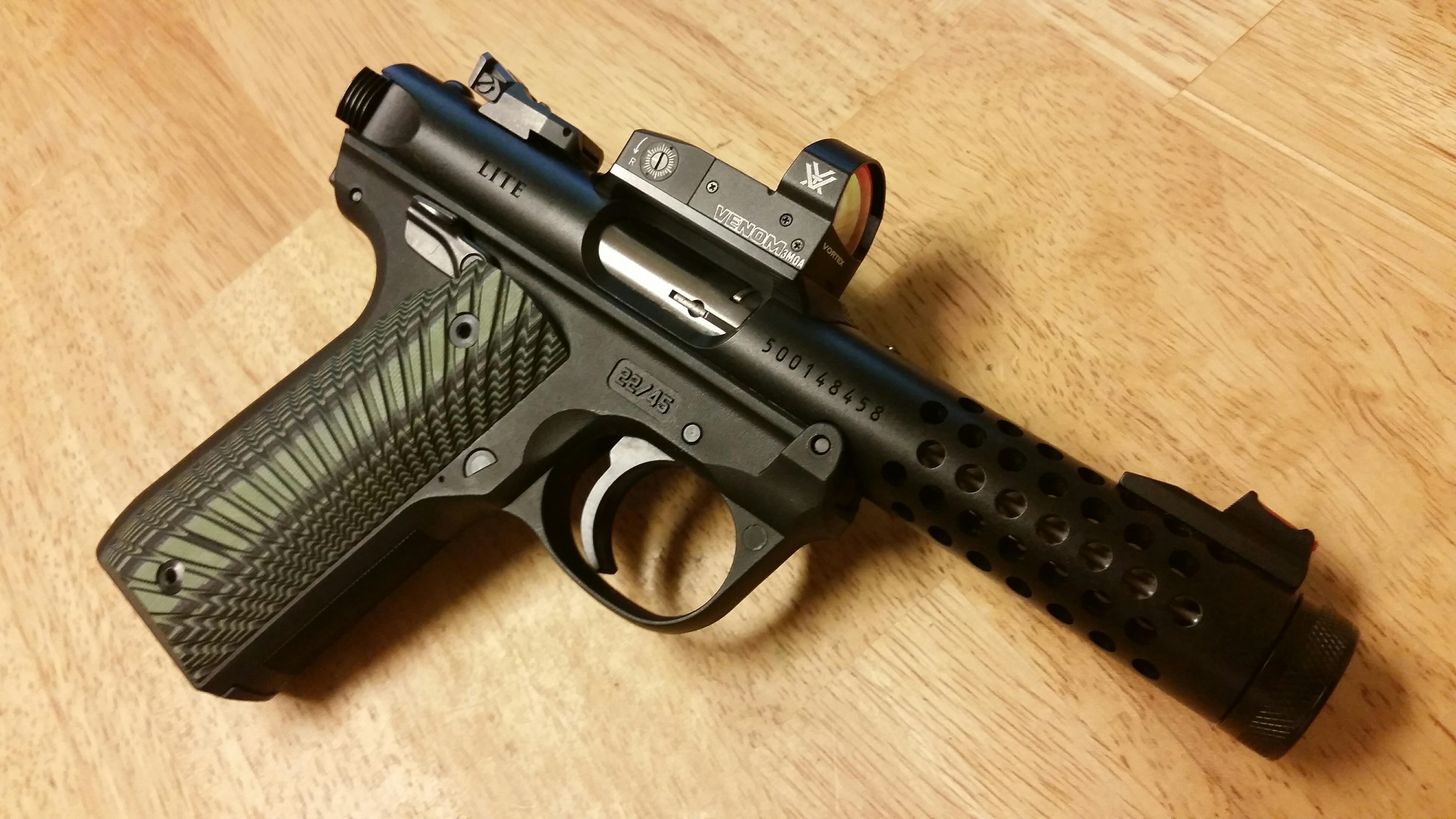 After installing the Venom I considered removing the iron sights, and although the threaded hole for the front sight is easy enough to fill, I wasn't thrilled about having an empty rear sight dovetail...since neither sight is in the way and don't add any appreciable amount of weight to an already light pistol, I've left them attached.

I wish you success in removing the sight

I installed the scope mount that came with my Mark III 22/45, and installed a Primary Arms MDS red dot.  I actually do see the front sight in the very bottom of the red dot view, but it is not bothersome.  The rear sight is below the red dot and out of the way, so I did not remove it.

As a follow-up, I did remove the rear sight. I needed to drive it off (left-right looking from the breach), taking some fairly sturdy raps.
The piccatiny rail from Ruger covered the dovetail at the rear. You just need to rotate it 180. There are two ejection relief cuts in it.
This will allow you to relocate the optic further back. I like this look better than having an optic and irons.

As a side note the Vortex Venom has small co-witness marks on the body of the optic so you don't loose everything.