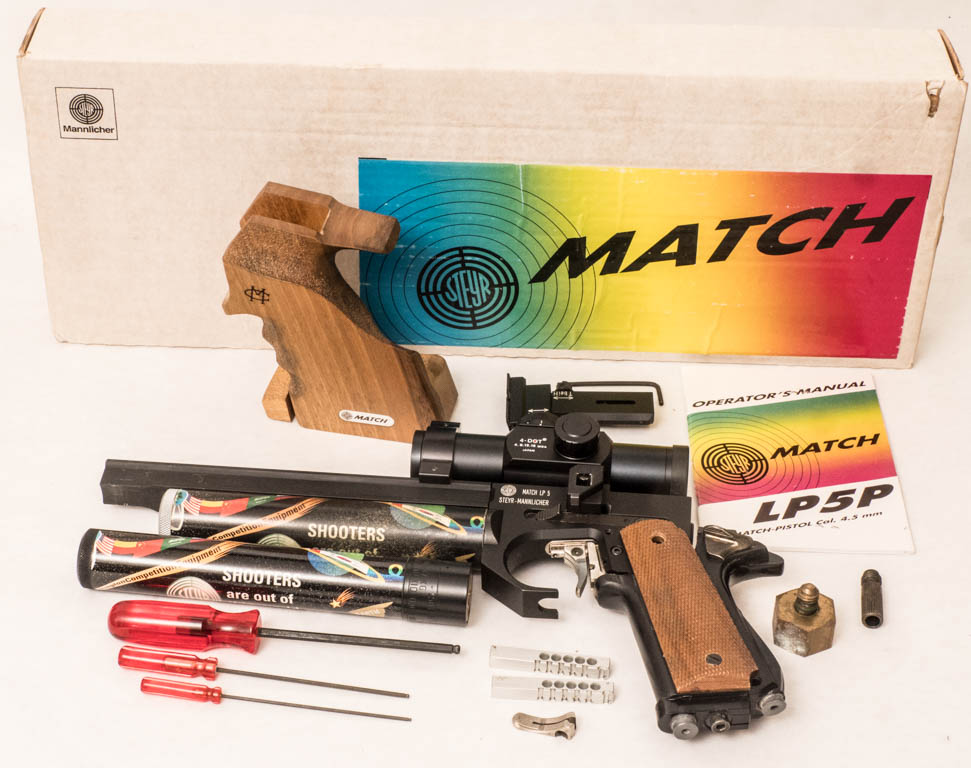 As received from Scott, the grip (which is plastic) was obviously take from some kind of replica 1911 then machined to suit the LP-5. Grip panels are standard 1911 walnut.  It mounts to the LP-5 using the same bottom-entry drawbolt used for the original grip -- no alterations to the LP-5 at all.  The grip had a couple of minor shortcomings, though.   First the trigger was farther forward than on a typical 1911.  So with this one I have two triggers that are slightly machined to allow them to get closer to the grip.  One is the stock PL-5 trigger and the other (on the gun) is also machined to the width of a 1911 trigger.  Second, the balance and weight of the assembly were nowhere near a typical 1911.  To fix this, I bored some holes in the grip and stuffed in some swaged .45 bullets.  A couple of gentle hits with a hammer and the soft lead expanded nicely to hold itself in position.  You can see the bullets on the top and the bottom of the grip.  I won't claim absolute perfection on trigger length and gun weight/balance but IMO it is pretty good.

The LP-5 barrel shroud is close enough to a Weaver profile that a scope ring will clamp securely.  The only mod necessary is a shallow slot to accommodate the ring's crossbolt.  The slot is neatly done and unobtrusive when the ring is removed.

There is one steel CO2 cylinder and one aluminum cylinder.  The package includes the original medium RH Morini grip, the iron sights, and various other bits.  I'm also throwing in a set of Bondhus Allen wrenches.

The gun is almost as new.  It has only been out of my basement two or three times when necessary to dispatch determined woodpeckers attacking our cedar shingle siding.

Perhaps an ignorant question. How do you refill the CO2? It looks like a compressed air adapter in the pic.

Allgoodhits wrote:Perhaps an ignorant question. How do you refill the CO2? It looks like a compressed air adapter in the pic.

No.  The brass adapter screws onto a standard siphon type CO2 bottle and the cylinders screw onto the adapter.  Very easy.

Is this still available?