Perhaps ten years ago, I bought an old High Standard gun that had been highly modified.  Maybe I didn't understand nearly enough about it.  I'm sure I dry-fired it until I knew better.

Then several years later, I bought a new "used" Victor barrel from Alan Aronstein.  By then I should have known what (not to) do with a 22.  Not sure how it happened, but the old barrel has an indent where the firing pin must have hit it, probably more than once, and the newer barrel has a mark that I can see, but not feel.  I never deliberately dry-fired with the newer barrel on the gun, but sh*t happens.

For a long time I read about a chambering tool that moves the metal back into place, repairing a barrel that was damaged by a firing pin.  The problem was, by the time I decided to buy one, they were no longer available.  Every so often I would search again, but with no success.

Then I discovered there is a new version available from Tandemkross.

The package arrived yesterday.  I didn't find directions in the envelope, so called and spoke to Tyler Marcos at Tandemkross.  He explained that the reason it can be pushed/pulled from either end, is because some barrels don't provide enough room to "push" it into the barrel.

Anyway, I'll get to try it later this week.  For people who never bought the original version, this might be helpful.  I remember reading in this forum that machining the barrel to fix the problem is not a good idea - the best way is to push the metal back where it belongs.

I'm NO machinist, so if anyone here has advice about how to do this, I'd love to hear it.  I hope to start with the old barrel later this week, then fix the newer barrel. 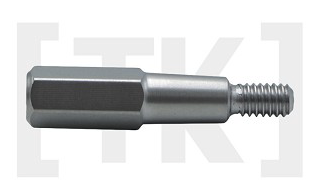 Clean the chamber thoroughly. You only want to iron out the steel, not the residual Carbon.

To prevent galling, smear some good quality grease on the surface that "irons" out the dent.

Go slowly. You can always go back to step one and iron it a wee bit more.

Hmm, the first think you mentioned wasn't in their directions.  I sent them a link to this thread, maybe they'll add it.

So thorough cleaning of chamber, so it's down to shiny bare metal.
I'll take before/after photos too.