Am hoping someone here can tell me the approximate value of a 52-2 in Excellent condition in the box, but with only 1 magazine and without the original grips.   I've got a hankering for one of these and don't want to pay too much.   Thanks in advance for your replies.

How'd I do?   $1000 out the door with the rubber grips, 1 magazine and the original box.   Now to find another magazine and an original set of grips in excellent condition. 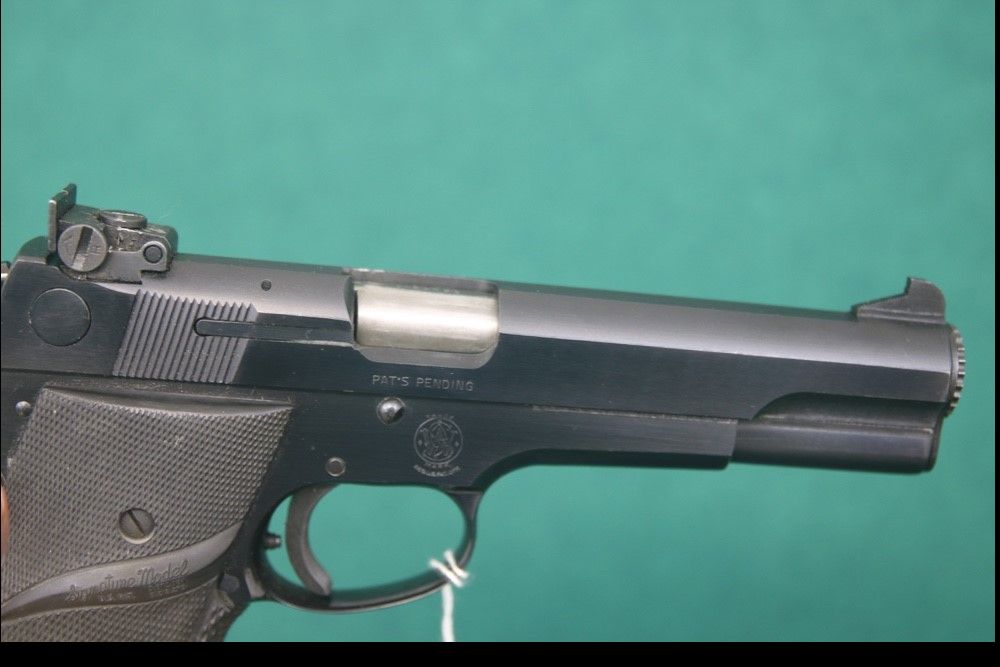 From just the one picture I would say it looks in good shape, but need more pics to make sure.  I would get those rubber grips off ASAP and clean the frame under them.  They like to retain moisture and that can cause issues.  There is a process for taking the gun apart especially as it relates to the barrel and slide.  There should be more than enough information here in that process, but you MAY need a bushing wrench to take it apart at least initially.  I do not use the bushing wrench, or anyother tool to re-install the bushing on re-assembly.  Finger tight is what I have used for many years.  You can break things by using the bushing wrench and getting them too tight.  Also think of the S&W bushing wrench as a mini pipe wrench.  There is a right way to use it and a wrong way.  If you do this correctly you will almost never need the bushing wrench to disassemble the gun again.  How does the inside of the barrel look to you?  And remember, oil is your friend with this pistol but don't go crazy with it.  It's great you got the original box for the pistol.  That adds a minimum of $100.00 or more to the overall value of the gun, perhaps more in some circles.  If you reload .38 W/C ammunition for this pistol there are some hints for that process too, but more on that later if you desire.  In my opinion the M52 is one of the most desirable pistols ever made, but one of the least understood.  Good luck with yours!

Don't have the pistol yet.   I bought it in PA, and they are delivering it to a dealer in upstate NY where I live.   I plan on picking it up on Friday.   My overall impression is it looks barely used.   Agree with you regarding the rubber grips.   However, will have to reinstall them until I get a set of the original wood grips.   If you can point me towards detailed disassembly/assembly instructions, I would appreciate it.

I would say you did fine.  You could probably sell those rubber grips to someone on Fleabay.

Some loading info…. Note that the maximum charge is less than the solid wadcutter data.  I’ve been happy with 2.8 of most of these powders that are currently still available. 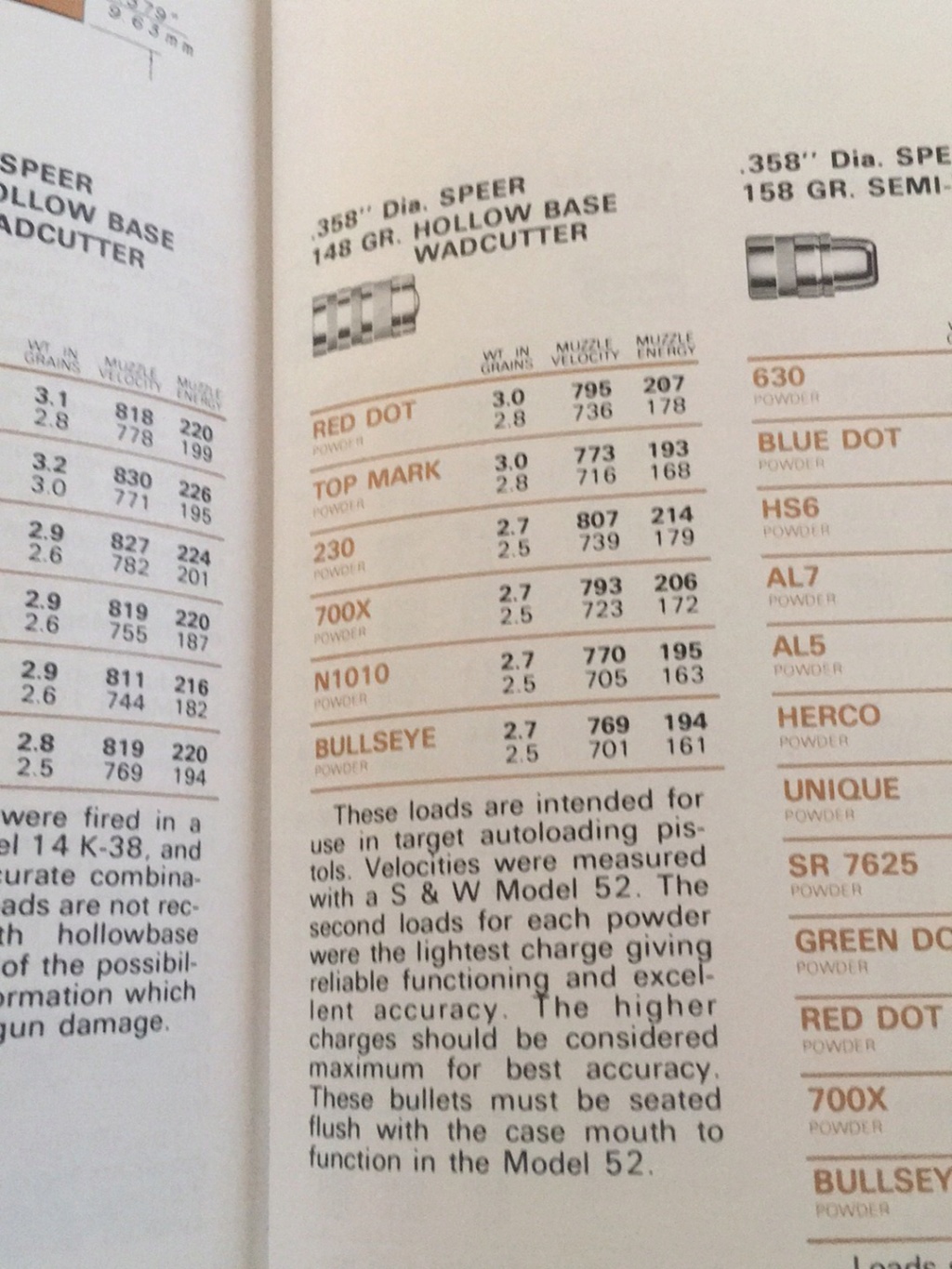 Wobbley wrote:Best way is to get an adapter plate that goes in the dovetail.  EGW makes one.  You choose which mount and red dot combination.  Using a reflex red dot is fine and requires no load or spring adjustment.  This is mine wearing a Burris ast Fire 3 on an EGW mount.  Shoots well. 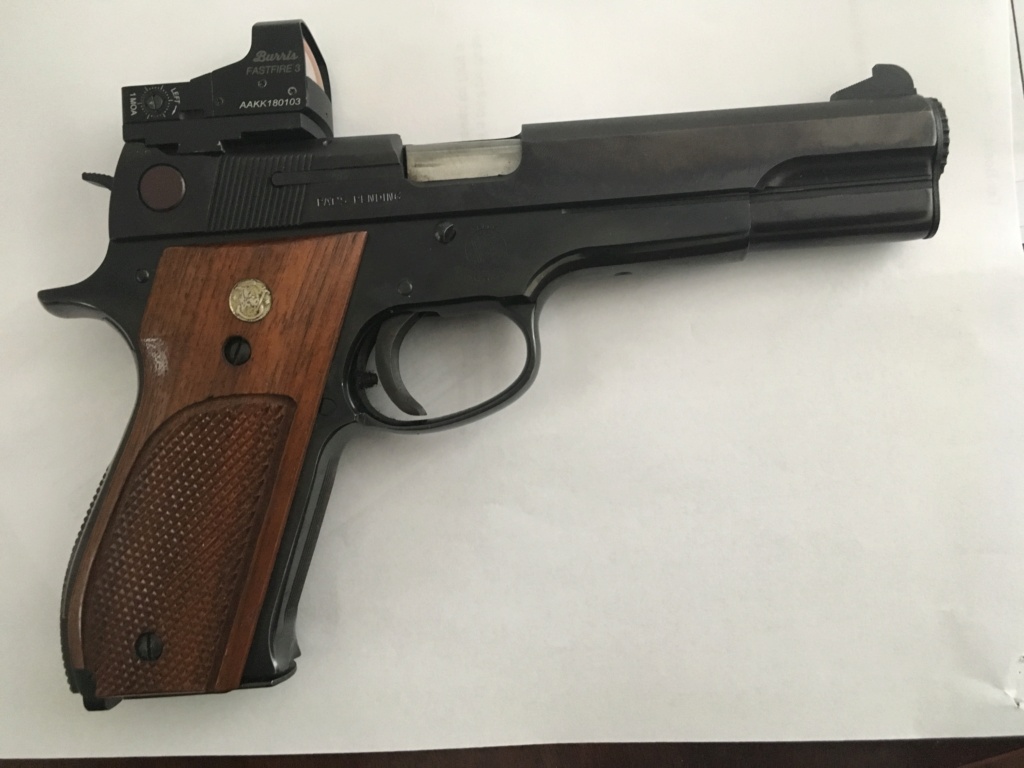 Ordered the EGW adapter plate and a red dot.   Read a half dozen of comparison reviews of the Burris FastFire 3 and the Vortex Venom, and went with the Vortex.   Hoping you can tell me how to remove the rear sight without buggering it or the slide up?   Thanks.

Congratulations on your purchase!  I have put red dots on both of my 52-1’s and a 41 with a 52 style rear sight. The sights have been snug in the dovetails but not overly so. If you don’t have a sight pusher, clamp the slide in a padded vise and tap the sight out with a nylon or brass punch. I’m not home right now so can’t go look at the sights but seem to remember there is a small set screw that needs to be backed out before moving the sight.
The EGW bases I have used have been a very good fit, one requiring a single swipe with a fine file and the other two were a perfect tight fit. They required tapping all the way with a brass punch but not too tight. EGW makes a very good product!
I am running a mixture of Burris FF3’s and Vortex sights. Both operate very well. I use whatever was on sale when I needed it.

There should be a single set screw in the sight either under the elevation leaf or adjacent to it.  Back that out and it should slide out to the right side easily.  There is a spring and plunger hel in by the sight and this belongs to the magazine safety.  So keep those in there.

I used a sight pusher https://sightpusher.com/ to install my adapter plate from right to left.  The sightpusher people have supporting blocks that span the safety on the other side of the slide.  I wrapped the slide in a chamois leather rag bought at an auto parts store.

Smaller is .050.  Bigger “sets” of Allen wrenches have these or perhaps try a well-stocked hardware store.

Several parts arrived today, to restore the 52-2 to original.   First, a set of original grips to replace the rubber Pachmeyers that came with it.   Fortunately, there was no rust on the frame under the grips.   Looks nice!   Also received an original bushing wrench.   Question: Is it a normal right hand thread?   iF so, that bushing is on there REALLY tight.   Don't want to force it if it's a left hand thread.   Oh, and Wobbley, getting grips and other parts are a heck of a lot easier than finding a .050" allen wrench, but I will be picking one up at a NAPA auto parts store tomorrow.   Thanks.

Agreed, stuff the S$W bushing wrench in the box and leave it there.  I tighten mine up finger tight and line up the pin with the notch in the bushing.  Better to be a tad loose than too tight.  Bushings have been known to crack if tightened down too much.  There are many M52 owners who dislike taking the bushing out so they leave it in and do a half hearted job of cleaning the pistol.  If you shoot it give it the cleaning it deserves especially removing all the lead from the barrel.  If yours is one of those M52's that hasn't been apart for a while put some penetrating oil such as Kroil around the bushing and let it soak for a bit.  A 3/4" 12 point socket will get the bushing out if it is a decent socket.  You have to make absolutely sure the socket is pushing the bushing locking pin down all the way so the bushing will turn without interference from the pin.  I used to use the socket to tighten up the bushing until I learned to just hold the pin down with my finger nail and spin the bushing in by hand.  Tighten the bushing and back it off a notch or two.  Don't forget to oil the outside of the barrel and inside of the barrel bushing.  I am glad to hear you don't have any rust under the rubber grips.  And don't go crazy tightening up the grip screws.  They mar easily if you aren't careful.  Good hollow ground screw drivers of the correct size will help avoid damaging the screws.  It was said before, but it's important to remember if you reload do not seat the bullet above the rim of the case.  Doing so will induce malfunctions where the cartridge jams in the magazine as it is trying to move upwards.  It's also a good idea to chronograph your reloads and see where they are speed wise.  It should go without saying, but if you fire a round off and it doesn't feel or sound right make sure you check the barrel for an obstruction.  Hollow base wadcutters have been known to blow the center out of the bullet leaving the majority of the bullet in the barrel.  This usually only happens when guys try to increase bullet speed beyond what is recommended.  Good luck with the new to you pistol, I think you will enjoy shooting it.

Thanks for the tip regarding the 3/4" socket.   My intention was not to remove it, but rather have it be finger tight like everyone says.

If Mr 3/4" 12 Point Socket* were to have an encounter with Ms Belt Sander* or Ms Mill* or Ms Lathe* to make the front of the socket flat to depress the bushing stop while having good engagement you may have more disassembly/reassembly happiness.

(I used to cruise pawn shops for Craftsman tools so I could have available victims for job specific customization. Cut, grind or bend to get the task done.)

I finger tight my M52 bushing and don't know where my wrench is at the moment. I figure the bushing has a lot of threads.

*Your tools and machines may identify differently.

Houston, we have a problem.   In dry firing it, just noticed that it will fire with the safety on.   Is this something simple that I may have overlooked and can fix, or does this call for a gunsmith?   Thanks.

USSR wrote:Houston, we have a problem.   In dry firing it, just noticed that it will fire with the safety on.   Is this something simple that I may have overlooked and can fix, or does this call for a gunsmith?   Thanks.

If you drop a wood or plastic dowel (or even a pencil) down the barrel does the firing pin strike it when the safety is ON?

The safety should cover the firing pin from being struck by the hammer.

The firing pin struck the pencil with gusto (hit the ceiling) with the safety on.

USSR wrote:The firing pin struck the pencil with gusto (hit the ceiling) with the safety on.

Wow. Safety down to cover firing pin and it struck the pencil?

USSR wrote:The firing pin struck the pencil with gusto (hit the ceiling) with the safety on.

Wow. Safety down to cover firing pin and it struck the pencil?

I'm glad you said "Safety down".   I was thinking safety down was firing mode like with a 1911.   But, why have the hammer fall when the safety is on?

It is an artifact of the design of the Model 39.  They did leave out the hammer drop function which only complicates things.  On th 39 Safe is lever down at a 45 degree angle (same as on a Beretta 92 or Walther P38). Fire is lever parallel to the top of the slide.  So put the lever full down and see if you can launch a pencil.

Nope, no firing pin contact with the pencil with the safety lever in the down position.

Word to the wise, don’t use the safety feature for extended dry fire practice. The block can be peened to the extent it can hinder the firing pin travel.

USSR wrote:Nope, no firing pin contact with the pencil with the safety lever in the down position.

Got the Vortex mounted today.   Quick question since I am not familiar with red dots: Where the elevation and windage adjustments indicate "Up" and "R", does this indicate that you would turn the dial this way to move the dot this direction when the pistol is shooting high or to the right, so as to align the dot with the POI?

No.  The directions indicate the movement of the group.  If your group is high and right then move them opposite (down and left).