Signed up for my first 2700, have a question

Signed up for my first 2700, have a question

I get this much:

There are extra charges for EIC Leg Match and Distinguished .22 Match.

I have read up on Distinguished badges and leg points, I guess I don't understand this though:

You can shoot both, and even distinguished revolver, if offered. They're all separate pursuits.

mspingeld wrote:You can shoot both, and even distinguished revolver, if offered. They're all separate pursuits.

That confuses me even more.

So the CMP EIC Leg Match is center fire, and the CMP Distinguished Match is .22, and both are NMC 300's?

So the CMP EIC Leg Match is center fire, and the CMP Distinguished Match is .22, and both are NMC 300's?

A bit more complex that that but essentially yes. Both are iron sight matches. The service pistol match is a bit more restrictive on what guns you can shoot but their is a list in the rule book, also need a 4lb trigger. The 22, with very few exceptions, is basically any match 22 without a dot.

As a relative novice, I might suggest just doing the 2700. 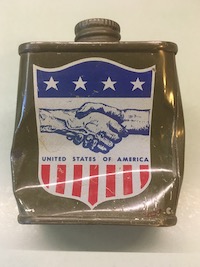 SonOfAGun wrote:As a relative novice, I might suggest just doing the 2700.

The 2700 I shot over the weekend was 5.5hrs with a lunch break, that was fairly quick. More typically 6-7hours. With a full complement of EIC matches, it could easily be an 8hr day. This all assumes a single day match, if broken up over two days, it is a bit more manageable.

I do not want to discourage you from the EICs as they are some of the most competitive and skill building matches available to shoot. Even if you need to borrow equipment to shoot the m it is worth it. Just keep in mind a 2700 is an endurance event.

SonOfAGun wrote:As a relative novice, I might suggest just doing the 2700.

To clarify: as a novice myself, I found that my first 2700 (just a couple months ago) was plenty to take on in a single day.

I hope this clarifies more than confuses. If not, just ignore it.

What is a Distinguished Match?
Any "distinguished" match in precision pistol will be a 30 shot National Match Course (NMC) which means 10 shots slow fire at 50 yards, 2 strings of 5 shots in 20 seconds each at 25 yards and 2 strings of 5 shots in 10 seconds each also at 25 yards. The NMC is shot the same as other bullseye matches except for 22 Rimfire which starts with the gun down (details below).

Distinguished matches are separate from other matches that take place on the same day. Anyone can fire the match, but at the end, all the shooters who have not achieved distinguished status are separated. The top 10% of non-distinguished shooters will earn points. The number of points (6, 8 or 10) will depend on what what place the shooter finishes and how many shooters there were.

When a shooter earns 30 points they earn the distinguished badge (Congratulations!). Note that at least one of the awards must be 8 or 10 points (a "hard" leg). There have been a few shooters who earned 40+ points without getting a hard leg. If you can go to Camp Perry ALL leg awards are 10 points and given that they usually give away 30+ legs, it's a great place to earn points. Plus Camp Perry is a great experience everyone should do at least once.

EIC stands for Excellence In Competition and is the CMP's name for distinguished matches outside of the National Trophy Matches at Camp Perry each year. Assume any reference to "EIC", "Leg Match", "Distinguished" or "NTI" means the same thing.

Distinguished Service Pistol is more than 100 years old. Originally it was a military rifle program expanded to civilians and adding pistol around a century ago. If you are in the military, your branch of service manages the distinguished program with slightly different rules for each branch. If you are a civilian shooter, the CMP (formerly Department of Civilian Marksmanship or DCM) manages the distinguished program. When firing a match all non-distinguished shooters, military and civilian, are counted in the results and points awarded.

Service Pistol must meet the requirements in the CMP rulebook. The biggest requirements are it must use open sights, have standard issue grips and shoot jacketed ammo. Allowed modifications include adjustable sights, replacement barrel / bushing and other fitted parts. Service Pistol used to mean either a 1911 with 230FMJ or a M9/Beretta 92 with ball ammo but was expanded to include most pistols used by military or police in Europe or North America and most calibers and weights of bullets so long as the guns have open sights and use jacketed ammo.

Distinguished Revolver was introduced in the early 2000's by the NRA. The rules waffled around the first few years, but settled on most revolvers chambered in 38 SPL or 357 MAG, with open sights and grips that are mirror image on each side (no palm shelf or ortho grips). Adjustable sights, replacement barrels and tuning of the gun are allowed.

Distinguished 22 Rimfire (I think that's the official name) started about 10 years ago. The rules are based on International (Olympic) Standard Pistol, so the guns have to be open sights but custom grips are allowed. The biggest difference with other Bullseye matches is for Timed and Rapid fire must be started in the "low ready" position. This means the arm must be at a 45 degree angle or the gun within an inch or two of the bench if you can't achieve 45 degrees. You can't start raising the gun until the targets start turning. 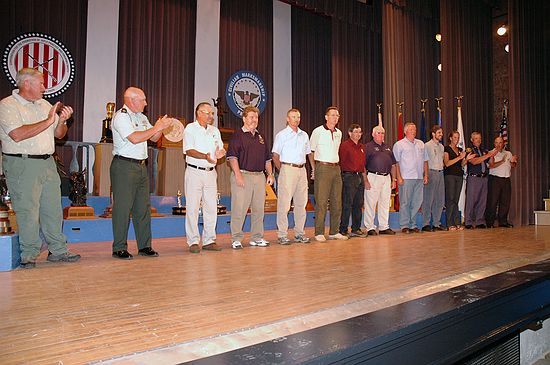 And don't forget the Harry Reeves Revolver match. That is one of my favourites. Basically any Center fire revolver with any sights and grips - NRA CF weight trigger (as I only recently found out!). Any safe ammo. AFAIK.

) can comfortably "thumb" the hammer and effectively do the TF/RF in Single Action mode. Wimps like me have to Double Action all the way - sorts the boys who can shoot out from the men!

Adjustable sights, replacement barrels and tuning of the gun are allowed.

According to the newest rulebook I can find, revised 2020, replacement barrels are not allowed.

But, define "replacement". A factory barrel swapped out to replace a damaged one, or for better accuracy? Or a custom Douglas Bull Barrel on a CF pistol?

SteveT wrote:If you go distinguished try to get to Camp Perry for the CMP matches. You can receive your badge on stage at the awards ceremony along with some of the best shooters in the world. It is quite the experience.

Awards ceremonies will be held in front of CMP Headquarters – not within Hough Theatre, as in previous years

Distinguished Badge winners will be recognized, but not pinned in 2021.

I would disagree with not shooting the EIC matches.
1 It's only 30 more shots with each gun
2 By adding to the EIC shooter count you are helping someone else get a leg.
3 You don't learn how to do something by not doing it.
4 You're already there.

I would add that even if you don't have a suitable gun - someone is almost guaranteed to offer to loan you one - just to get the numbers up so someone else can get leg points. I've done this myself on numerous occasions, even donated the ammo for the 45.

Similar topics
» A question about a 2700
» Another 2700 CF Question
» Signed up and wanted to say hi
» Hi. Just signed up & I have a Parkinsonism, which is similar to, but not exactly the disease. I have no tremors (about 30% of those with Parkinson’s do not)
» First outdoor 2700