I've recently come across a box of 1911 springs, and of course, none are labeled as to poundage. I am in the market for spring tester, and can make one if anyone has plans.

Please share any plans or spring testers you have used.

As far as commercial units go I have the one linked below.  Works good and comparison tests with known / labeled weights seem to agree.  It can also springs other than recoil.  There are probably multiple vendors for this.

I googled spring rate calculator before and found it reasonably accurate. (I had a new, used pistol with an unknown recoil spring). https://www.thespringstore.com/spring-calculator.html

Accuracy was determined by measuring a couple known springs and running the parameters through the calculator. Trying it out with different wire material, I found that the difference between chrome silicon, music wire, and oil tempered wasn’t very big.

Wished I had thought of the bathroom scale. A lot quicker and more accurate.

Brownells used to sell a spring tester, when I wanted one they didn't have any so I made my own using hardware store parts--a long bolt, a few washers and an accurate fish scale (tested against 5 pound bags of rice).

I filed the threaded end of the bolt flat and drilled a hole in it for the hook on the fish scale and used a sharpie to mark the compressed lenth of the recoil spring (1.625", IIRC).

It worked out really well and I found that Wolff springs are accurately rated.  Now, if I could only find the darned thing I'd post pictures (lol), but it's pretty much intuitive (as far as putting one together).

Except for the scale, the parts cost less than $2.  Finding an 8" bolt was the only difficult part as most of the hardware stores around me only have the 6" bolts in stock. 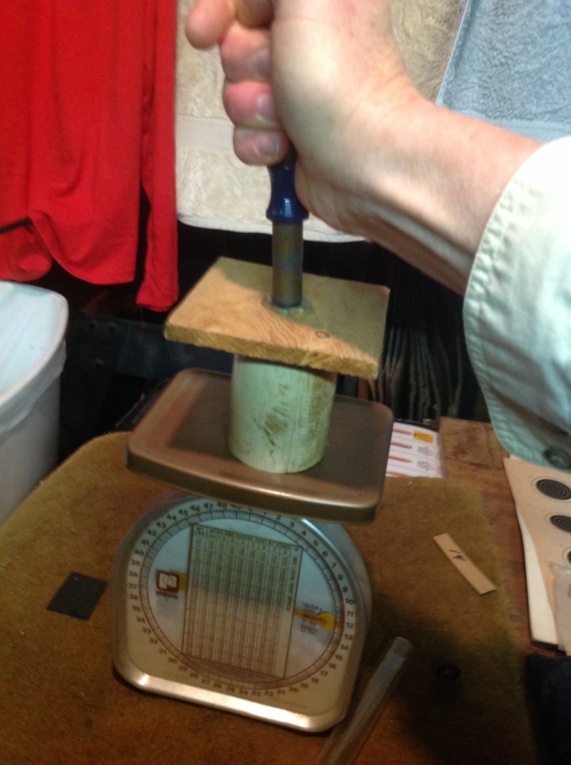 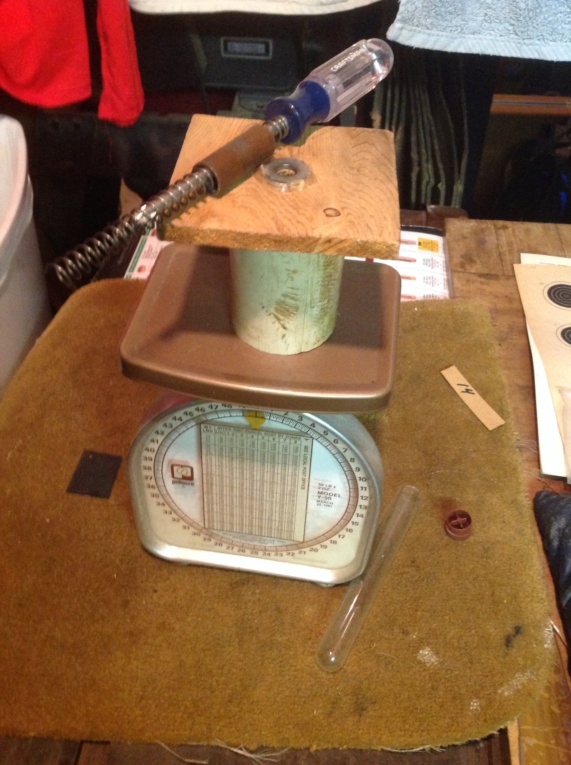 How long is the piece of pipe ?  which appears to be 3/4 emt or cooper ?  It also appears the the board and PVC clearance  and stability.  Is that correct ?

Plastic base is 3.25" high, enought for that screwdriver to clear the scale platform. l put the flat spring end towards the scale with cut end inside pipe. Zero the scale weight with all parts on it or hard way, subtract parts weight later.

Compress so driver point is outside of spring and put the point into the hole. Wear glasses and be careful. Compress assembly until it bottoms out, then lift slightly to get a good reading. An additional base would add more stability but I haven't done that yet.
Good luck