My p100 story and tips to succeed

My p100 story and tips to succeed

I am posting to tell my story, thank Jon Eulette, and share some do's and don'ts of the stuff I did that was good and what was a waste of time.

In 2013, while at a range in Afghanistan my Company commander approached me and was apparently impressed by some of the rifle and pistol reflexive fire and drills I was running, and he recommended I take up bullseye shooting and go to Camp Perry to shoot the P100. I had never heard of any of these things, but was interested and started to attend local matches when I got home. I paid way too much money ($2300!) for a new SACS 1911 NM Hardball, one of the few out-of-the-box EIC legal guns available at the time, and started slugging away with hardball.

I shot in local leagues, using my 1911 and marvel conversion for everything. I made expert by 2015, but plateaued quickly due to work schedule, kids and other life circumstances. I also have a severe hand tremor that manifests after about 11am that I have never been able to get rid of that severely limits my scores. At my best I usually shoot mid to high 80's long line, mid 90's times and low 90s rapid. But every EIC match I ever shot (always afternoon after a 2700) I would bomb due to the hand tremors. To date I still only have 12 points for that reason.

This year, I had only one month to train after a long hiatus from bullseye and did some things differently that were apparently beneficial.

1) No reloading or messing with recipes. I had a huge stockpile ready from winter and I ripped through it with minimal time spent in the garage doing chores. Shoot, put guns away, spend family time. I had to do a couple hours of reloading to get ready for Perry and that was it. I found good recipes years ago and stuck with them. If you are interested, what is use is the following:
Long line Zero 185 JHP 1.210" crimp .472" (straight wall) 4.3gr VV N310. 14lb recoil spring.
Short line Zero 185 JHP 1.210" crimp .472" 3.2gr Vectan Ba10 (similar to N310 and bullseye. I use because it was dirt cheap) 10lb recoil spring. I have not had an alibi with this gun for years. I actually don't recall the last time I had one.
Yes, I swap recoil spring long to short line. Using a captured guide rod it takes about 15 seconds after slow fire with no chance of shooting off a recoil spring plug. If you are skeptical about my short line load, it ransomed 1" 10shot group @25 yards. No idea what it shoots at 50.

2) I didn't 'simulate matches' and score them like I did in the past. I trained sustained fire a lot, shot a lot of drills on a blank target to facilitate sight alignment, and shot a LOT in windy conditions. As a result, I actually am more comfortable shooting in the wind and can get off up to 3 good shots in a lull on slow fire.

3) No messing with equipment. I have been shooting the same gun since 2013 (Jon rebarreled a couple years ago) the same trigger since 2015, the same slab grips, same everything. I have wasted time chasing different guns (tried a Beretta for a while, tried an XDM, waste of time) and different triggers. My 22 and 45 are identical. Same trigger, grips, weight, everything.

4) Didn't keep score. ever. I call all shots in the scope, then forget about them and concentrate on next shot. I verify correct score with scorer and then immediately forget about it for next string. Worrying about score is a mind game that was very bad for me.

5) Never argue with scorer unless they are giving me something blatantly wrong. To me, the stress of the argument is not worth a potential point or X, and will cause tension between you and you scorer that for me was not worth it. So I will accept something that I think is 'in' and they say is 'out' but is close. Not worth it to me. Verify scores on card are correct, sign, take picture and forget about it. If you look at my timed target it might actually be a 94 or 95 but conditions were terrible and I just didn't think it was worth it to mess with overlay/plug whatever. Maybe unwise, but it definitely maintained my concentration and calm.

6) Do not take advice from losers. This sounds harsh, but I have gotten a lot of bad advice over the years from poor shooters. There are a lot of great people, on this forum especially, who freely give advice on how to do something that they themselves are not good at. So sift through the forum advice carefully. Again, they are great folks and mean well but don't take marriage advice from someone divorced 3 times. There are a LOT of shooters with a high classification from shooting euro guns that fall apart when they shoot irons on a 45.

Hope the tips are helpful. This has been a very hard journey for me, bullseye has not come 'easy' and making service pistol my singular focus (I have spent minimal time shooting or practicing with 22) has probably held me back a lot. Your results may very. Keep in mind I am in expert classification, and am still not distinguished. Take it all with a grain of salt.

A big thank you to Jon Eulette for building all my guns (I think we are up to 5?) and the coaching over the years. Thanks to the other HM's and coaches on the forum.

Here's my targets. Called all long line shots - wind got me as shot was breaking on a couple. Mostly 2 and 3 shots at a time in the lulls. As you can see, some sight adjustments on the short line would have improved my score dramatically. My tremor was pretty bad by rapid, wind was gusting hard enough it was hard to keep sights centered and water was beading up on the front sight so I didn't bother with adjustment. 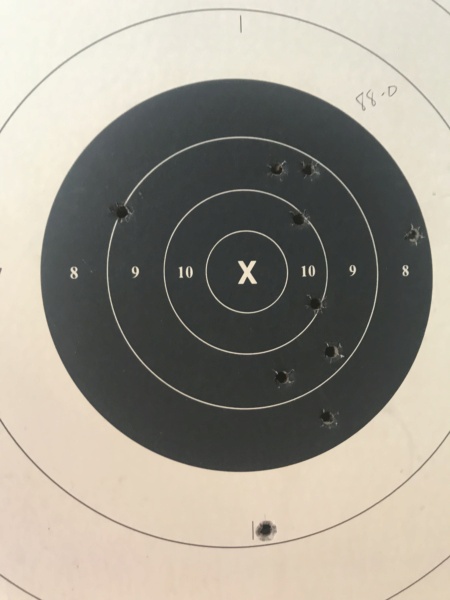 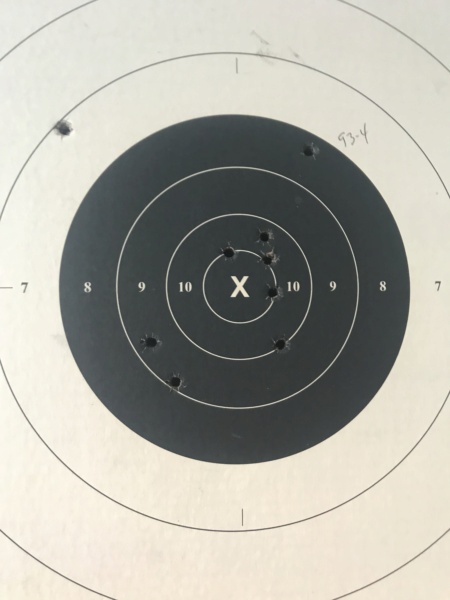 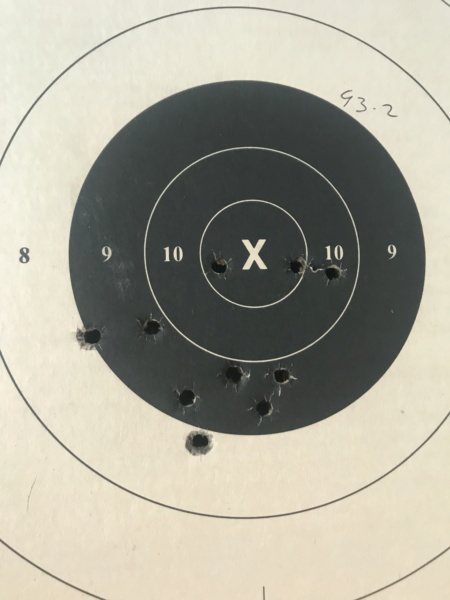 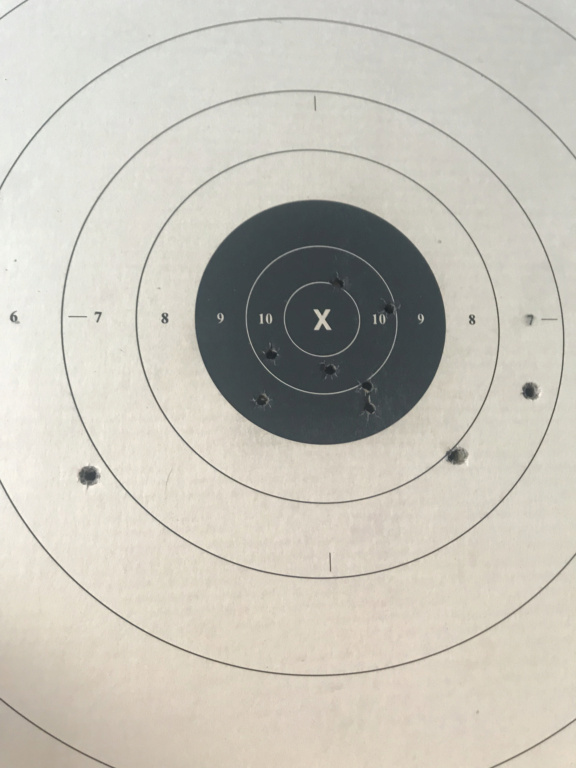 the wind was tough this year.

Congratulations. good on you for sticking with it.

He used to shoot with us on Monday's when he was stationed nearby.

Could not ask to meet a nicer chap.

Dave,
I have really missed the WA crew. What a great bullseye community and fantastic ranges. Hope you are all well and enjoying the NW heat waves!

Thank you for the great open and honest post! Reflects many of my own findings over the last few years that I have been active in BE. Hope to join you one day in making the P100…congratulations on the achievement!

Wow what a helpful post! Especially for this new shooter. I LOVE hearing people’s experiences. Am going to take that advice to heart. Especially not sweating the scores. You and other veterans know better than most that life is too precious. Hell, the enjoyment of the lives of our families and loved ones are too precious. You’ve done an amazing job. Thanks from this rank newbie.

Thanks, that's an inspiring story. I know that a lot of people with a hand tremor would just give up on bullseye completely.

One thing that really helped my scores when I was focused on service pistol was going to a sub-six hold for the long line. I started out trying to get that perfect 6:00 sight picture with the front sight just touching the bottom of the black. That resulted in poor trigger control because I couldn't hold that sight picture for more than a second or two. Once I clicked the sights up and started centering the sights in the white space between the bottom of the bullseye and the bottom of the paper I could focus more on sight alignment and the wild shots into the white started to go away.

Thanks for sharing, good stuff.

"5) Never argue with scorer unless they are giving me something blatantly wrong. To me, the stress of the argument is not worth a potential point or X, and will cause tension between you and you scorer that for me was not worth it. So I will accept something that I think is 'in' and they say is 'out' but is close. Not worth it to me. Verify scores on card are correct, sign, take picture and forget about it. If you look at my timed target it might actually be a 94 or 95 but conditions were terrible and I just didn't think it was worth it to mess with overlay/plug whatever. Maybe unwise, but it definitely maintained my concentration and calm."


How very true.  When under stress, the sympathetic branch of the autonomic nervous system causes pupil dilation.  This will affect the sight picture somewhat.  When relaxed, the parasympathetic branch causes pupil constriction which will allow an improved depth of field for the sight picture.  A relaxed mindset is key to seeing better which may help with better scores.