HOW GOOD IS YOUR PISTOL?

HOW GOOD IS YOUR PISTOL?

HOW GOOD IS YOUR PISTOL.

This is the end of my 2nd season shooting pistol.  I have three;  .22, 9mm, and .45 ACP.
In the beginning, I had no idea how addictive this process would be, and my targets look like they were hit with a shotgun blast, if I hit it at all.  Was it me, the gun, or both?

I recently set out to see how accurate my pistols are.
For the .22, I shot multiple 5 shot groups from a bench at 25 yards and averaged the groups.  2.5”  using CCI standard.

My 9mm likes the 145 grain with the 3.8 charge.  But it is not nearly good enough for Bullseye shooting.

Has anyone else tested their 2.0 pro and found it not acceptable for Precision Pistol?

I did not see what 22 you are shooting but you might consider looking for a used Hi Standard or a S&W model 41 (I have one).  The Ruger's are accurate but their triggers are not as nice.  I have seen some really good deals on nice Hi Standards.  The downside of the Hi Standards is that not to many people know how to work on them and the magazines can be temperamental. The 41's are still made so there are more smiths that know how to work on them if needed.  I have a Springfield milspec that was worked over by Dave Salyer and then further worked on by another smith. The Springfield range officer is a great starting point.  You can shoot irons and not have to spend the money on optics. For reloading you can use a single stage press.  Don't be afraid of used equipment both my pistols are second hand, most of all have fun.

10sandxs wrote:I think $4K for a pardini was something the op wasn't interested in at this point.  I can relate to being on a  budget.  Good thing the wait on my first bullseye pistol was a year... took me that long to save the money for it. Almost 20 years ago...

Thank you to all of you.
I needed the comparative shot groups to understand how far I have to go.
I am 80, live on retirement, so yeah, money is an issue.

I show up on the range with my stuff in a laundry basket not a fancy wood gun case,  use binoculars and don't have guns that cost thousands.  But, I have just as much fun.   I have much to learn and not much time left to get it done.  I'm 3 years past my expiration date.

I think my .22 victory will suffice.  My 9mm will be reused in IDPA and steel plate, and my precious Colt 1911, 1918 reissue, a family heirloom.   I'll be looking for a Range Master in the future.

I will be sticking with iron sights, because that's what my dad and granddad did.

Thanks again for all the input.

The Victory is more than capable. It sounds like you are on a good path. Welcome to the ever frustrating, masochistic world of Bullseye!

Always humbling to come on here and see some of the groups you guys are shooting.  I'm really just a plinker myself and have always shot with 2 hands, so I'm not a bullseye shooter.  However, when cost of ammo spiked I started looking into getting a nice .22 pistol.  And since I like guns and am willing to spend a pretty large percentage of my disposable income on them, I inevitably ended up with two.

So I thought I'd chime in.  To answer OP's question, I would rate both my pistols as very good.  Ended up with a High Standard and a S&W 41.   Got both used, and I guess I lucked out because both have been problem free and shoot lights out. My memory is that I paid between $8-900 for each, so not cheap, but then I think I could probably sell them for about what I paid for them.  The High Standard was the cheaper of the two and has a slightly better trigger, but the 41 came with a serviceable red dot, vs iron sights, so I am more accurate with it.  The bottom line is that I think you can get a damn accurate pistol for not an outrageous amount of money, particularly if you're willing to buy used.

I would sell both guns and get a target 22LR. Ammo cost, recoil, and initial cost will be lower.
I have considered a High Standard Victor. They are in town. But thinking of selling my 2021 M41. It has run trouble free. But I shoot Hammerli X-Esse better. Mounted a DOT on one. Using the iron sights on the other. Both shooter higher scores the my M41.
But I have a long way to go. Sometimes seems it gets further and further.
Worked on grip strength and now recovering from strained ligaments in both hands. Group sizes doubled after injury..
Went shooting with my son a couple months ago. Shot my 22’s and was very happy. He saw the targets and said it looked good. Pulled out one of the 10MM race guns and ran 25 rounds free standing. My son was floored. All shots were in a small circle. He could not believe I could shoot full load 10MM that accurately at a reasonable speed. The hours shooting the 22’s have improved my shooting in general. And reduced the fliers.
Some days it just feels good.

The 9mm can work in precision pistol but I find it more challenging to get good loads than say a 45. These are just my observations based on my personal experience so take it in that light. First, I tried many of the usual suspects in powder: Bullseye, 231, Unique, Accurate 2 & 5, etc, etc. I found nothing beat Power Pistol with WST a distant second for accuracy. Second, little changes can make a big difference. I was shooting @ 25 yards with a mix of loads and this happened. I shot 2 strings, 10 shots, and they were high and not grouped as well as they "felt." I then shot 10 more with the same load except the overall length was 0.035" longer. You can see what a difference that made. My opinion is good 9mm accuracy is out there but you usually have to work more to get it. Hope this helps. 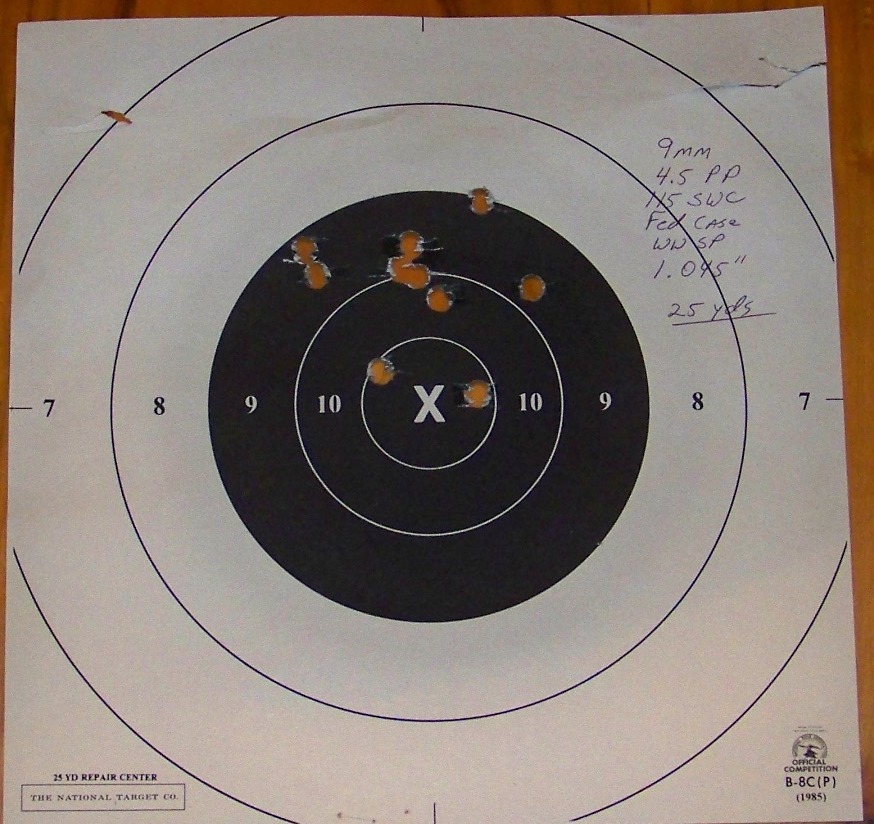 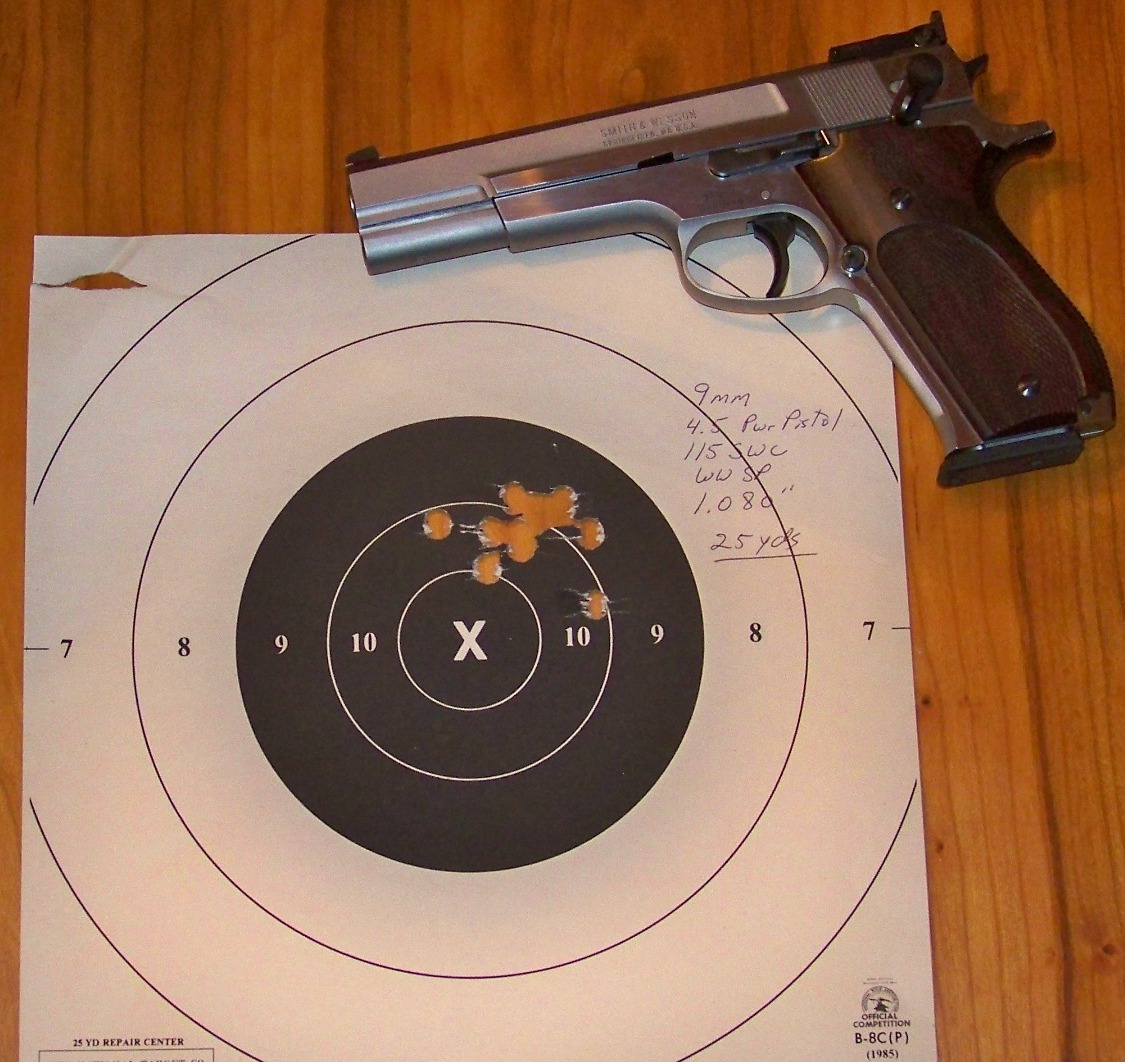 For testing ammo it would help to us a dot or 8x scope.  I use a 4 moa dot with a 25yd target posted at 50yds.  This makes it easier to see when the dot is centered up in the target.  I think it is important to have good trigger control so you can get repeatable results when testing like this.

I have always had trouble sandbag testing with iron sights.  My eyes play tricks on me unless the lighting is perfect so I avoid it.

Ff you can still see the sights clearly then I agree you should continue to shoot iron sights.  Most move on to shooting with a dot because they have trouble seeing the sights clearly and this limits growth.  However using a dot as a beginner can be frustrating because the dot shows a lot of movement.