A relative of mine hasn't been shooting any of his guns for the past four years.
First there were multiple shoulder surgeries.
Then he developed an "Essential Tremor" meaning his body, including his head, jaw, legs, and hands, shake a LOT.
He wants to get back into shooting.

I have two questions:

First, is there any commercial source for ammo for the Model 52?  I've been searching for .38 Special, LWC, 148 grain", with no luck.  Nobody so far seems to have any for sale.

Second, does anyone have any advice I can pass on to him for shooting with tremors?  I told him that he needs to grip the Model 52 firmly when he shoots it, but he tells me that makes his tremors even worse.  At 15 yards he got all his shots on the backing board, and an overwhelming majority were "in the black" of his two shoot-n-see targets, but he is so overwhelmingly disappointed that he can't shoot like he used to, which was to get most of the shots "in the black".

He does have the reloading gear he needs, but it too has been unused for four or five years, and even before that, he only reloaded 100 or so rounds - and never shot any of them because I told him if he wasn't checking every case before placing the bullet on top, most people say that is unsafe.  (On his four-station Dillon, I don't know how he could ever see back there, but I know nothing about Dillon presses.  People say they do it - somehow.)

Federal shows a 38 Special match ammo but I haven't seen that they have had any available for months.
Buy Gold Medal Handgun for USD 49.99 | Federal Ammunition (federalpremium.com)

I found this 38 SPL 148 wadcutter 15 boxes of 250 available (I don't have any experience with this company)
Precision One 38 Special Ammunition PONE59 148 Grain Copper Plated Wadcutter 250 Rounds (lowestammo.com)

Thanks!  Interesting - would copper plated ammo be appropriate for a Model 52 ? 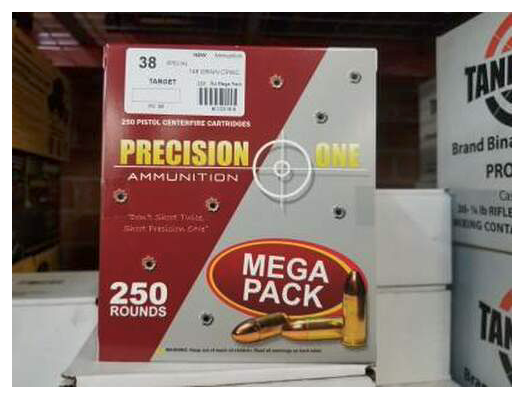 Those aren't full WC bullets. Can't shoot them in a 52.

Also think it's hilarious they call it Precision One ammo and the shots are all scattered on the box. Guess they want to prepare you for the "precision" of plated ammo lol.

I don't think the artwork on the box is representative of the product in the box.
If you follow the link they show some rounds with the boxes & are indeed wadcutters.

You re right, the picture on the box looks like 9mm. I sure as hell wouldn't be paying over $1 a round for plated ammo from a company I've never heard of.

Thanks!  Interesting - would copper plated ammo be appropriate for a Model 52 ?

I’ve shot MiWall’s ammo from my 52.  It functions ok.  It may be a bit sharper than FedRemChester but it’s ok.  That said, accuracy wasn’t great with uncalled 8s.  I haven’t bought anymore.

Zero (Roze Distribution) and Blackhills do load 148HBWC ammo but I’ve only shot Zero.  It wasn’t anything special.  Magtech is good with decent accuracy, Fiocchi doesn’t function but shoots well.  You could get 500 bullets and brass and load him some?

Thanks - will pass on the information.

I need to get my butt in gear and load some for myself - keep putting it off.  As everyone here suggested, the only thing I've been shooting is 22, and the only gun I've been using is my Nelson.  I want to load up some 38, just haven't had a chance to do so.  Maybe this afternoon...

I see another couple of options available this morning from MiWall, a non coated wadcutter, $32.95 / 50.

Ammo Seek is where I normally search for ammo, primers and powder-

very hard to find, best to make his own ammo, or get another pistol, try a S&W 14