End of an era at Camp Perry

End of an era at Camp Perry

I meant to post these months ago but I got busy...I've been told that ALL of the Huts are torn down now.  You can see our latrines in the background of some of the pictures. These were taken in September. 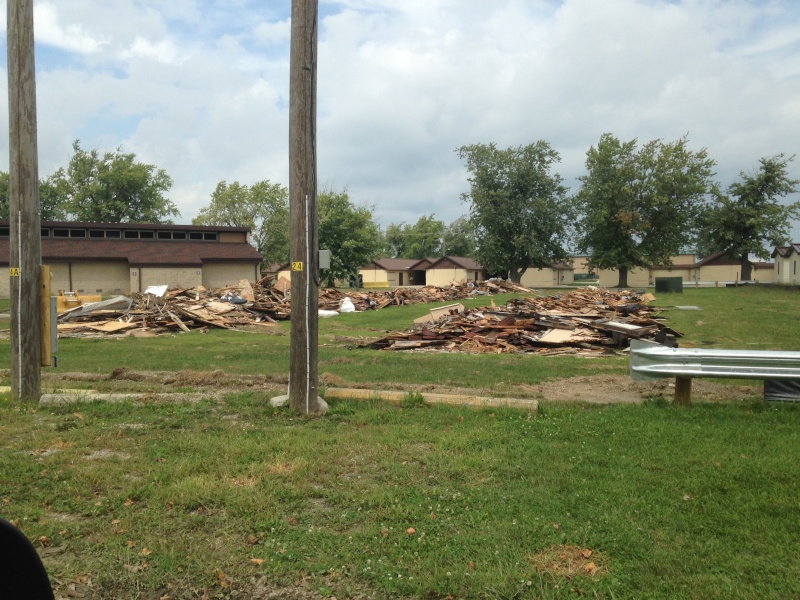 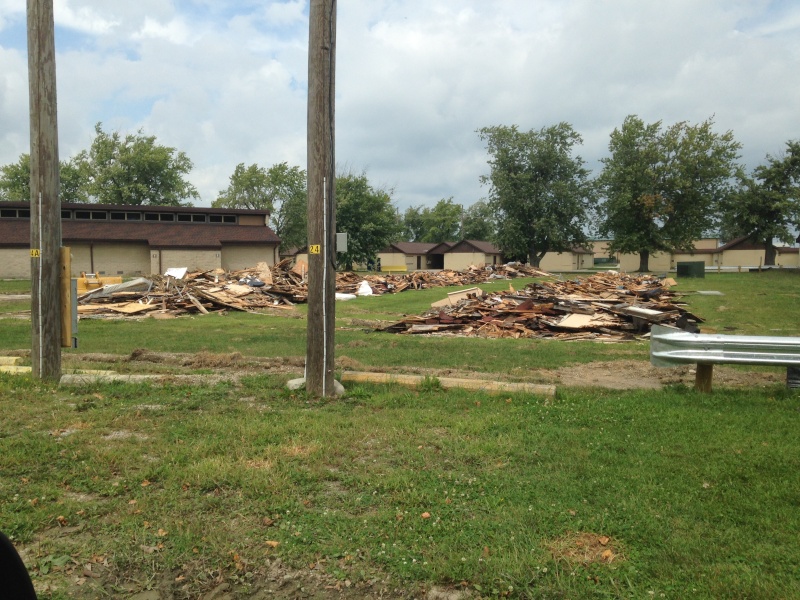 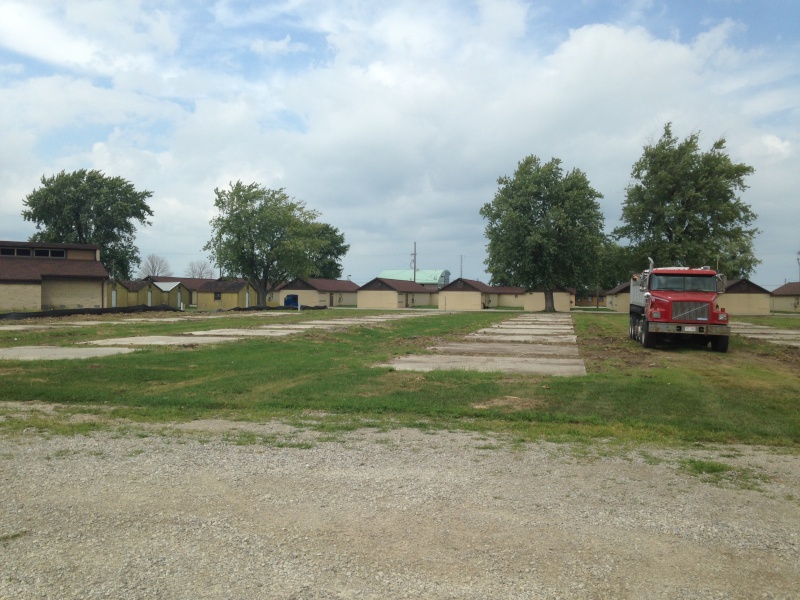 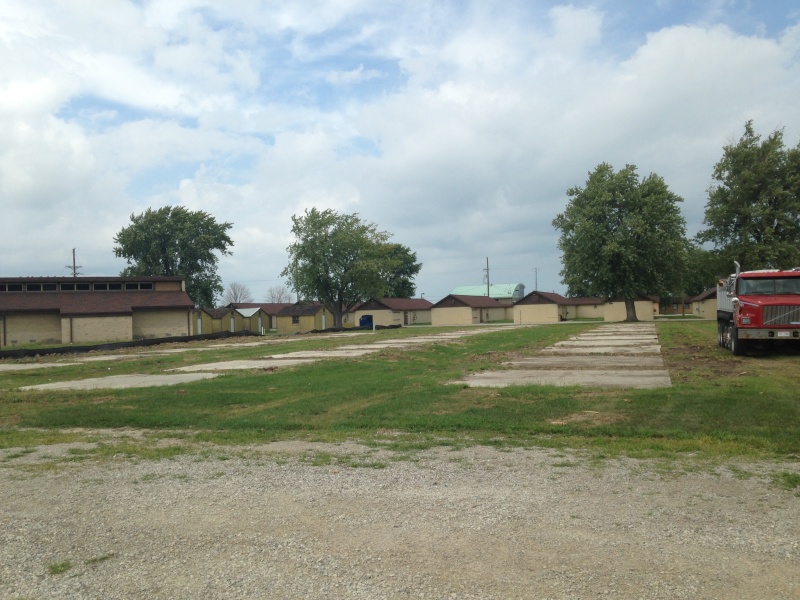 but they are being replaced with new better units aren't they?

I remember staying in the huts on my first trip to Perry in 1990. It was miserable as hell. Cold showers and filthy dirty. I won't miss them a bit. New ERA will be better by far. I never went to Perry for nostalgia, I went there to win. Does anybody know who the last National Champion was that stayed in the huts?
Jon

Dave R,
I heard that they intend to have the new ones built for 2015.....One of our Wisconsin teams stayed in on of the new ones in 2014 and it was VERY nice.  It had the same kind of air conditioner/heater as a hotel room.  All of the walls and ceiling were finished.  They had screen doors.  All nice stuff.  It was also a few inches elevated off the ground so no more need to dig ditches around your hut during a rainstorm.

DavidR wrote:but they are being replaced with new better units aren't they?

Better be glad Camp Perry is not a Marine Corps Base, you would be given an e-tool and a shelter half!

So finally ALL shooters on the facility with be housed better than POWs!

It did the job. Fortunately, it was not outrageously hot that week and rained only twice. The price was commensurate with the level of non-luxury. No complaints from me.

Glad to know that "better accommodations" is going to be complete next year.

The photos about the "better accomodations" were from 2013-14.  I hope they are making progress on the rest.

They built 27 huts last year and I thought that the total would be 50. The housing issues at Camp Perry aren't going away soon. That said, my first 2 trips I camped in a tent. The tent was fine.

Waxing nostalgic, my first trip to Perry was in 1981 and at that time the Huts were referred to as "Hooches", obviously a reference to the recent Vietnam War. There was one forty watt overhead light bulb that was not to be changed to a higher wattage, the electric fuse box panel was located inside the Hooch and used the old round screw-in low amp fuses.
When you passed through the twin towers entrance, there was a wooden building on your right and an MP stopped you and asked if you were attending the National Matches and had you pre-registered? Provided your answer was yes, you were instructed to draw your billet from the military supply staff inside, which consisted of a worn out and heavily stained mattress rolled up and secured with baler twine, an OD green wool blanket and a pillow without a pillow case. Then, you were issued a key to Master padlock fitting your Hooch. Then, the sergeant asked if you had any of the following items (contraband) identified in the pre-registration instructions as prohibited items: an air conditioner, a TV, refrigerator, a fan that pulled more than X number of watts. If you met muster after this exercise, you were given permission to go to your assigned Hooch.
The Mess Hall in-place and was operated by military cooks and served three meals/day at prices that today would be considered ridiculously low and you could have all you could eat. As I recall, breakfast was $1.25, all meals were cafeteria style. If you left there hungry, it was your own fault.
Then, walk-up registration was almost non-existent because all four ranges were full on every relay. The Hooches were miserable due to the prohibition against air conditioners or large fans. Most folks sat outside in the evenings making new acquaintances that would last a lifetime because it was cooler outside than inside the Hooch. Evening conversations lasting late into the night were common occurrences. Each evening the misquotes were so bad, farm tractors pulling boom sprayers filled with insecticide fogged the Hooch areas and you either had to leave the area or close all windows and doors for hours and suffocate in the heat to minimize breathing the insecticide. Sleep usually came in the wee hors of the morning when the Hooch temperatures declined to an acceptable sleeping level.
Armorers from all the branches of service was on-site and in addition to office facilities, they had tractor-trailer rigs that served as mobile machine shops. Any of the service armorers would perform any repairs that you needed on your competition pistols and they would even accurize a 1911 for you, provide all of the parts and labor at no cost--well, not totally free, it usually cost you a cold six pack of beer.
Fast forward to 2014, obviously, much has changed and not all for the good. But as one usually says, "well, if you think this is tough, you should have been here back in the day." Decades from now, the same will be said by new attendees. Several of the folks that made the annual pilgrimage from our state have passed on and many of the friends made at Camp Perry have either passed on or become too old or health issues prevent them from shooting. But, I would not change anything about the experiences that I've had at Camp Perry and I still enjoy listening to members of our state pistol team that competed at Camp Perry in the 60s. Their stories usually begin with--"now, back in the day."

"Waxing nostalgic, my first trip to Perry was in 1981 and at that time the Huts were referred to as "Hooches", obviously a reference to the recent Vietnam War."


Not to get pedantic on you, but my father, a World War II veteran had that term in his vocabulary.   I believe it came from the Japanese word for hut or house which is "Uchi".

My father (now 92), immediately before being discharged from the Marines in World War II, pulled guard duty at the naval prison temporarily housed in Camp Perry.  In the mid-80's, when I told him I was going to Perry; he referred to the quarters there as hooches.  Showing him photographs of my visit; I remember him saying that it didn't look much different from 1946.

I was just at the CMP Store 2 weeks ago and the new huts should definitely be ready for the 2015 Matches.

The new construction starts where the few rows of new huts left-off on the East-end and extend West up to the last three rows of the previously remodeled (green) huts across from Commercial Row. Also noticed a lot of new skin and windows going onto many of the older buildings along Lawrence Road (Main Entrance). I guess they want to make a good impression for the World Cup crowd and that is good for us, as long as the fees don't increase too much if at all.

My wife has been to Camp Perry as a volunteer and has stayed in the huts. I told her yesterday that they tore down the last of the huts. Her words were the same as your title. Camp Perry is a special place. Over the years, I've taken and introduced volunteers and shooters to the place. All of them have fond memories.

Just how many new huts are being built, and how many will be available for 2015? I'm hoping there's hut space for everybody that wants one.
I've only spent the last 4 years at Perry, and loved every minute!
John