Just thought we could all use some Positive Reinforcement so I made this a "sticky" which means its always at the top in this topic. So when you shoot a clean target and want to hoot a little post it here for all to see! 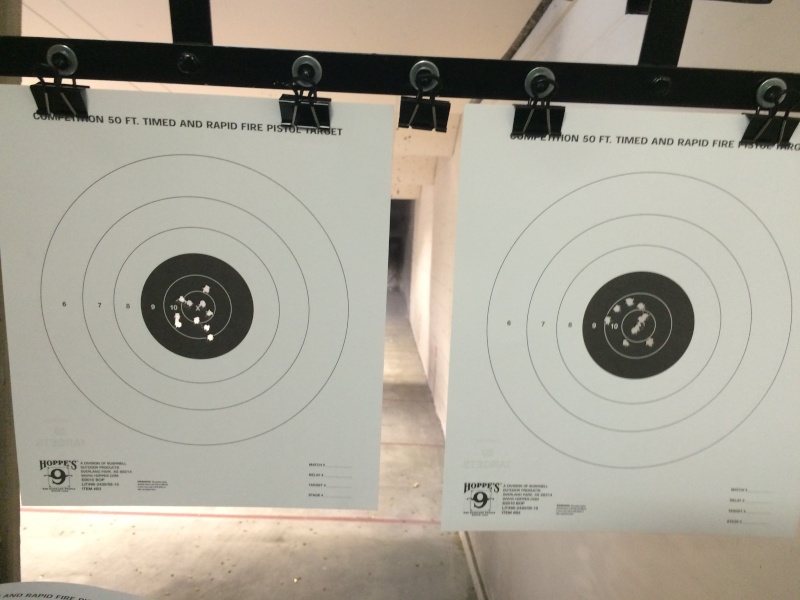 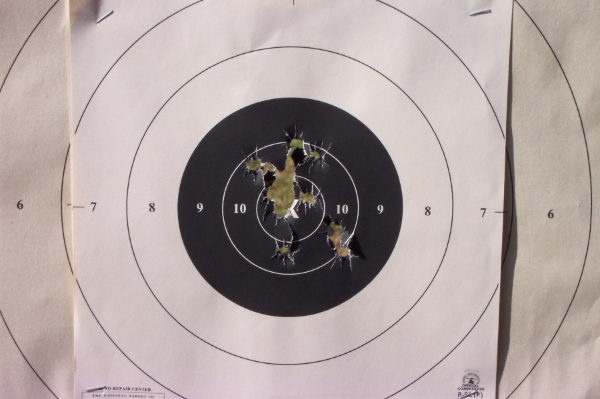 Here's a real hardball rapid I did a while back.

Jack H wrote:Here's a real hardball rapid I did a while back.

Dang, that's nice. No doubts on that one either.

Pretty sure I never did clean a rapid with hardball. I know I cleaned at least one timed fire but I can't remember many more, if any.

It's a different world now.

Jon Eulette wrote:It was over 80 today in So Cal. Absolutely miserable to not be wearing a jacket at 5:30 this morning :p)
Nice aggregate John.
Jon

You should come up to Sacramento Valley and shoot the state match with us in June. Bring some Southern Californians.

Dang that's excellent. I remember Zurek shooting a 2658 with a miss.

Shot 100-7x and 100-8x in rapid yesterday at the indoor match at Osage Iowa. First time shooting 200 rapid. Also had a 14 shot alibi in the rapid fire of the NMC and cleaned it.

Finally cleaned a slowfire target in a match: 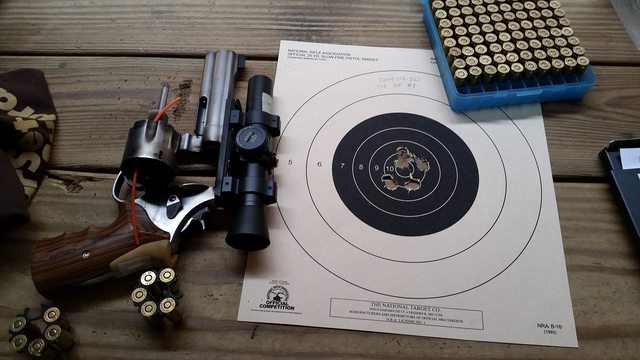 It was the "Devil's Brigade Memorial 1800 Match" at Fairfax Rod & Gun Club. I had almost not even attended the match for a number of reasons: I was unsure whether I'd even be able to make the match because a bicycle race I was planning to do was scheduled for the same day. The race was cancelled due to the weather but I hadn't loaded any ammo for the match, so the night before I was busily cranking out 50yd-slow and 25yd-timed/rapid ammo for my revolvers (which I'd been shooting lately to regain a sense of shot process and rhythm in timed/rapid, and I hadn't read the match program too carefully and didn't see that it would be shot entirely at the short line; I just assumed that because it was shot outdoors at FXRGC, they'd be using the full 50yd range). Well I got through a full batch of one hundred rounds of 50yd ammo and ninety-nine rounds of a batch of 25yd ammo when I noticed the powder measure on my progressive press had gone out of whack and wasn't throwing any charges. Unsure of just how many I had loaded without powder and unsure of which ones they were (since they all end up in a bin when they come out of the press), I had to pull apart all of my 25yd ammo to find the ones without powder -- I found about one in ten rounds had no powder, which meant that a process that should have taken a little over sixty minutes ended up taking about three hours.

It was about 1:30AM when I was finally done loading, which meant that I was operating on only about six hours of sleep when I left the house barely on-time at 8:35AM, and with only a couple PopTarts for breakfast as I drove to the range. While I was driving I was having a mental battle in my head: I was thinking I should just cut my losses and go back home and go back to sleep, but then I remembered a friend's story about showing up to a match with four minutes remaining in the first slowfire string and just shooting and pulling in the best score he'd ever shot. And I spent all that time loading last night - if I just went home now it would be for naught, and that's just silly. And in glancing through the match bulletin I read that a commemorative cap would be awarded to the winner of this match, and I thought how nice it would be to win that cap - I was planning to shoot my revolvers, but maybe I should have brought my semi-autos instead. Maybe I'll just shoot to have fun and not really try to win anything. And at least two newer Bullseye shooters would be there (a couple guys I know from MPL and are starting their 'careers' in Bullseye); I wanted to be a[nother] friendly face on the line, and to maybe show off a bit with my wheelguns. I arrived at the range just as the National Anthem was being played, and was able to jump on the line just as the Three-Minute Prep was starting.

As I set up I saw that the targets were at the 25yd line - we would be shooting the slowfire on the B-16 targets which I regard as being more difficult than the B-6 50yd target. Well, okay, suck it up; I haven't really practiced on those targets (the last time I shot those targets seriously was indoor, iron-sight-only 2700 match at Falls Township Rifle & Pistol Association back in November and the "Capital 1800" matches at Harrisburg Hunters' & Anglers' Association years ago), but the game is the same, right? Put the holes in the middle, and it won't matter what target is used.

And then Centerfire: Since we were shooting 25yds only, I decided to leave my 50yd ammo in the bag and shoot the whole match with my shortline ammo (it works out that I don't need to adjust my sights when going between the long and short lines with the different ammo loadings). I had been thinking last night that I only needed to load thirty rounds of 50yd ammo and fifty rounds of 25yd ammo (since I still had 20 rounds left over from the indoor 25yd match in November). I was thankful that I decided to load full batches instead.

I opened with a bang, and shot my first-ever 'cleaned' slowfire in a match, and I did it with my .45 revolver!  The rest of the match was about as well as I had ever shot with revolvers, and I pulled in another good score: 878.

I ended up winning the match and the commemorative hat. I was honestly surprised to have won, and I thought it would be one of the other top-shooters who would take it today since there were so many things that barely happened for me, but I guess I had a good day despite it all. Not bad for a match I wasn't really ready for and almost didn't attend! 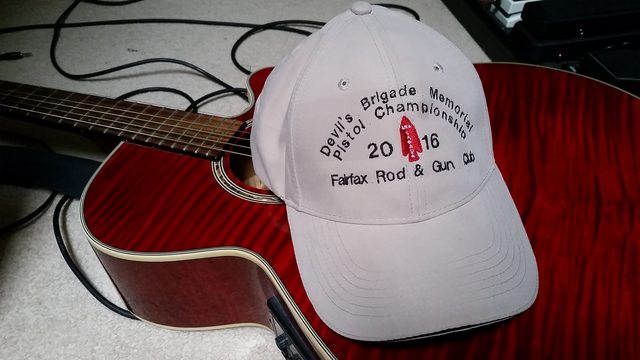 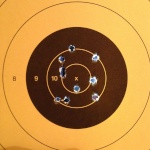 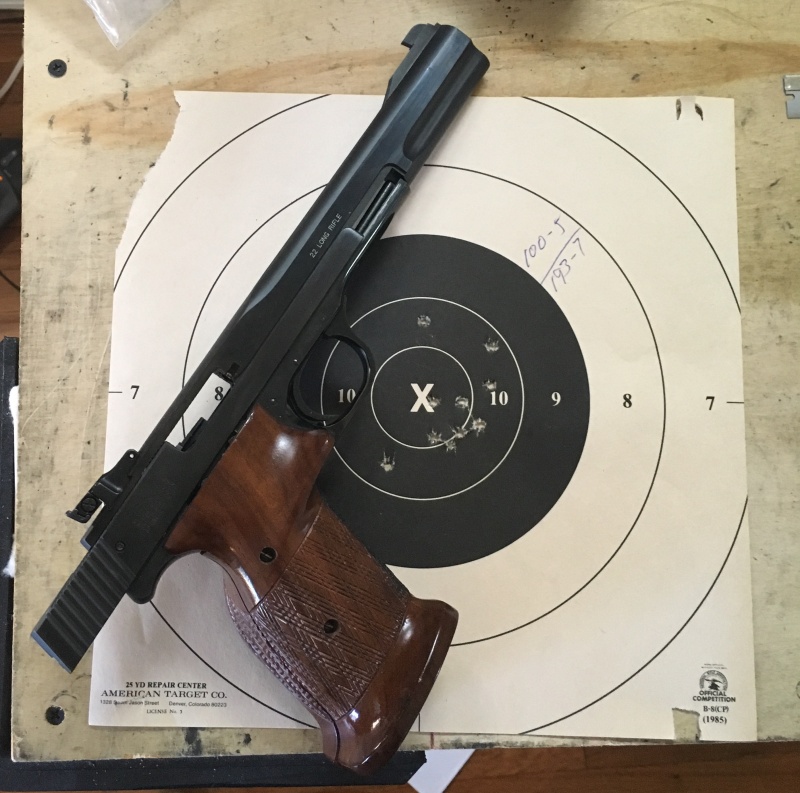 Well done! The first of many!

First match clean from a while back. Fired during a rapid fire string.  Hardball pistol shooting Atlanta Arms 185jhp. 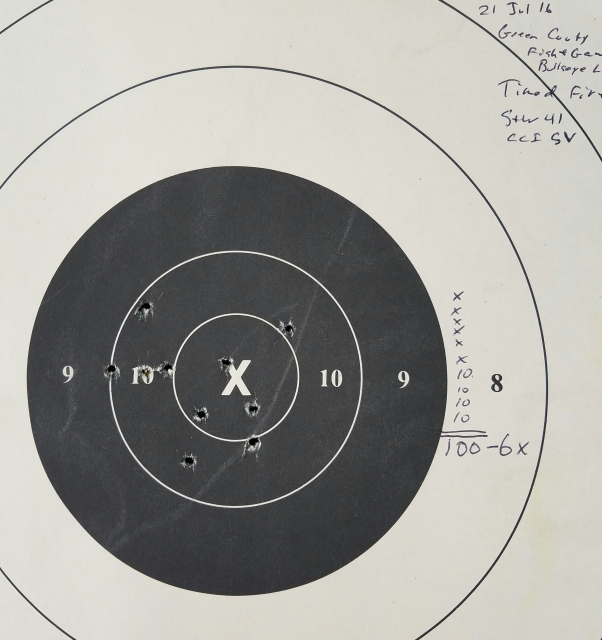 Be nice if posters listed what ammo was used.

DavidR wrote:Be nice if posters listed what ammo was used.

Mine was in the scribbles in photo.  CCI SV

Here is a target I shot this morning with my Smith 41. CCI SV and an ultra dot. This is 25 yard timed fire. 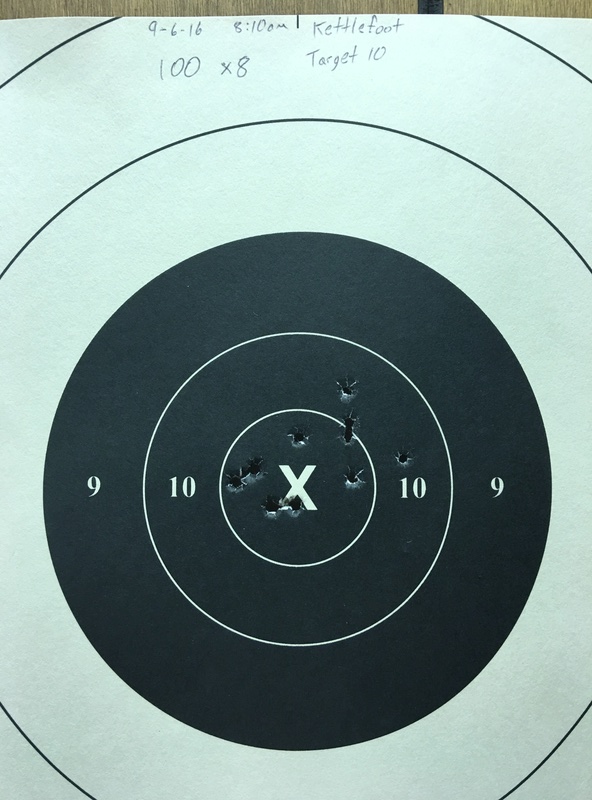 I shot this a couple weeks ago at an outdoor sanctioned 2700 match.  I could not get my .22 working so I got a 0 on both the first and second 50 yard slow fire.  The match director helped me out and let me use his .22.  I didn't have time to practice with it so I shot it with his sight settings.  The target below is the slow fire stage of the NMC.  I learned quite a few lessons that day.

Finally shot a good timed fire target...in practice, of course.  Norma Tac 22, CZ Kadet with Ultradot Micro HD.  Kinda ruined me for the rest of the session, however.  One would think it is possible to shoot 2 or 3 clean targets in one day.  I've only done two in one day once and there weren't many x's.

Similar topics
» Show your targets. Any targets - For instance, First target, or one that shows progress, etc.
» Clean a target? Get over it...
» 1st Clean SF Target
» How often to clean a target 1911
» 22LR, To Clean, or Not to Clean