I've not seen any other discussions as such, so here is a question, with personal opinion:

Has anyone noticed that the new CMP award structure has left behind the top three place medals entirely, for the practice of handing out what are basically qualification pins?

I definitely miss the top three place awards, which has been my reason for shooting these matches since I became Distinguished.  I know many who may be reading this can only dream of a top three finish, but there are others of us who do well in Service Pistol and regularly come in at the top.

Although the new pins are not really participation pins, I wonder if they will have the same appeal as such once individuals collect a dozen or so.  I'm not against receiving a few of these, but I'm disappointed over the loss of the other awards.  In lieu of this, I might not be as interested in competing in the EIC matches any longer, if there is no incentive other than bragging rights to win.  This is precisely why I no longer shoot Distinguished Revolver.  But, perhaps that is the intention of the CMP - if Distinguished shooters no longer are recognized for top achievements, maybe we'll go away and leave the matches to the non-Distinguished...

Ed, are you sure the medals for match winner are gone?  I do know that they are way behind on processing matches from this spring....

Rob Kovach wrote:Ed, are you sure the medals for match winner are gone?  I do know that they are way behind on processing matches from this spring....

I may be in error, but there is no mention of them any longer in rule 5.11 and although I have placed well in many matches that are now listed in the Competition Tracker, I have received nothing but several Achievement Pins this year.

Looks like the first three place medals are gone as per what I read last year(see link).
So the 1 gold, 1 silver and the 4 bronze I am looking at in my shadow box are the last I will ever see.
I know a lot of shooters could care less but I am all for trinkets and trash for my accomplishments.
Have another shadow box full of them from my skeet shooting days.
Oh well, I don't shoot much anymore anyway.

Yeah, the EIC place medals are gone now. Some of the service rifle guys lost their minds over it, because it seemed to come without any warning. Next year they're going to allow low-power scopes for rifle too, so a lot of changes for service pistol and rifle.

It's disappointing--the place medals actually predate the Distinguished Badges, so there's some history lost. There's a lot of grumbling about EIC matches being about qualification rather than competition now, and I have to say I agree.

I got my first 6 points at a match in May that I won. I just got the award for it last week. Here is a picture of the two pins I got. Can you guys tell me if these are different than what they use to send out? 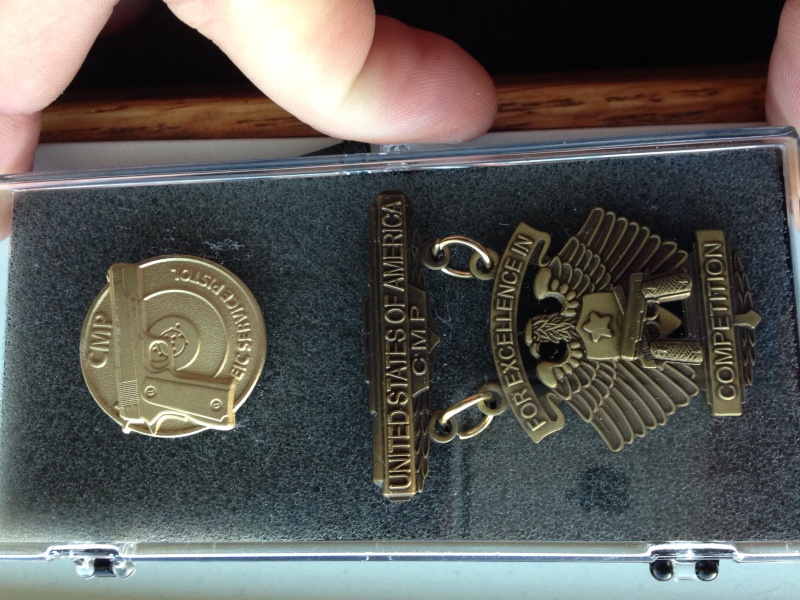 Doug,  There is quite a bit of difference between then and now. I just starting shooting again in 2012. 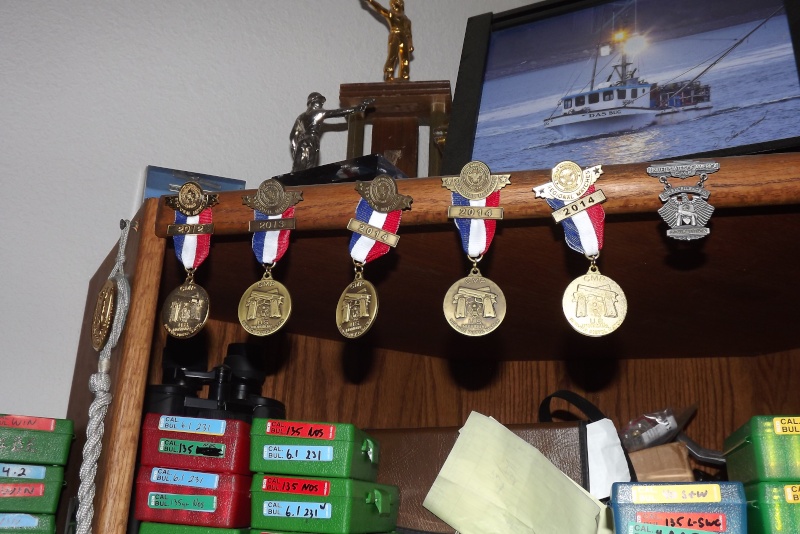 I definitely miss the place medals. The new qualification pins are neat but they are already starting to loose their luster. Bring the place medals back, voice your opinion to:
CMP Board of Directors www.thecmp.org/about/board
Director Gary Anderson dcm@thecmp.org
COO Mark Johnson coo@thecmp.org

Ed, I think it is wrong to stop giving metals to the winner also. I know they're giving out all these extra metals to try to motivate the new shooters . I'm in Charlotte NC. Now there are seven EIC pistol matches within 2 to 3 1/2 hour drive from me. One is the CMP Eastern games. And our local guys shoot none of these. When my friends and I were searching for rifle and pistol points we would drive the wheels off a car, just to shoot a match. There doesn't seem to be any motivation. I plan to still shoot the matches. Maybe we can paint the winners pin a different color , for bragging rights . Neil

I am really on the fence about this.    I have twelve points, and expect to eventually LEG out with my ball gun, but need to devote a lot more trigger time to my timed and rapid fire.

I think the CMP has really shot themselves in the foot, in a lot of ways.

There is no motivation for anyone to now shoot a match unless they are capable of shooting the minimum score for points.    Because they didn't make the matches unlimited, people who are not distinguished will more than likely just not hand in their score card, which will keep a lot of people who do make the cut off from getting any points.

Those who are all ready distinguished are, from my observation, not going to be shooting the match at all, because the awards are cheesy.  I have already seen it happen two weeks ago at a State Championship.

The usual twenty dollar entry fee is enough to dissuade anyone from shooting the match for fun.

In short, through a series of paired bad decisions, requiring a qualifying score plus only raising the number of matches you can shoot by one, and turning the awards into participation pins, the CMP has probably killed the Distinguished Pistol program.

I will shoot the matches at the big regionals, and CMP games, and places where I know they can award a leg.   When I get distinguished I will probably shoot CMP matches only at Camp Perry, because the Presidents Hundred is the only worthwhile match left.

Hold on everybody!!!  Our voices have already been heard:

Rob,
The intent of the award pins program was to have an award system for the Distinguished Shooters and the non-distinguished shooters who may not receive EIC points in a match.  For several years we’ve heard from many competitors that they would like to see us do some kind of classification system and we felt the award pins were similar to that, but more in line with our CMP Games matches achievement medals.  We’ve also heard and noticed through the years that the place medals were being won by the same distinguished shooters a lot of times and many felt it was the same old thing over and over.  They wanted to see something different.   To be honest, we’ve heard this mostly from highpower shooters and only a few bullseye competitors.  In 2015 we implemented the award pins program and did away with the place medals based on what we were hearing from our competitors.
We have had a few complaints about not awarding the place medals since we stopped them this year.   All the complaints except for one have been from pistol competitors.  Our intent has never been to push away our Distinguished shooters from shooting in our EIC matches.  We would like to see more of our Distinguished shooters come back and shoot our matches.  Our mission is to provide more shooting opportunities and bring more people into the shooting sports, definitely not push them away or focus only on a certain group of shooters.
CMP cares about our competitors and we listen to what they want and need.  We have heard our pistol distinguished shooters loud and clear.  We will be implementing the place medals back into our EIC awards in 2016.  Thank you for your email and feedback on our EIC shooting program.  Please contact me if you have any other questions or concerns.  Feel free to share this email with any of your fellow competitors.
Regards,
Christie
Christie Sewell
Programs Chief
Civilian Marksmanship Program

Wow, a sanctioning body that listens to the desires of competitors. Too bad the other organization with three initials can't be more like that.

Not Really Answering..... the protests??

My pin hasn't made it to me 3 months after my shoot so I'm up for medals, maybe they ship them faster or at least harder to lose.....lol

Wow, I can't believe that actually worked. The NRA needs to take some notes from the CMP.

I think the CMP did the right thing re-instituting the medals. I suppose they were more concerned with the trend in amateur sports that seems to say, "Everybody is a winner!; Everybody should get an award!"

Compete to beat someone.

Compete to beat someone.

BE Mike wrote:I think the CMP did the right thing re-instituting the medals. I suppose they were more concerned with the trend in amateur sports that seems to say, "Everybody is a winner!; Everybody should get an award!"

I just want to be THE winner.

This matches the way many service men and women learn now in the military.

Optics have become priority over irons for most.