Any Recommendations for an Optometrist

Any Recommendations for an Optometrist

Several of us in a fairly new Middle Tennessee Bullseye League are looking for a Optiometrist (OD) who is a shooter and understands the unique issues bullseye shooters face. As opposed to those ODs who are, well, non-shooters and are unwilling to even read Dr. Wong's great articles!  Been there and done that expensive route without resolution.  We would love to go see Dr. Wong in San Francisco, but that's a tad far. Getting kinda difficult figuring out which of the 2-4 dots to use and/or which part of the egg shape is the best part to use to make a hole.

We would have no problem traveling 300-400 miles from the Nashville area.  Any suggestions on a OD you've used?  Thanks.

Any of them SHOULD be able to help you see a single dot. I think irons are more of an issue since you want more than distance RX but less than reading. But dot sights are just distance vision, or am I missing something? If you have your astigmatism corrected for good distance vision, you should be seeing 1 dot.

Just center the egg over the target and activate the trigger without moving the gun. Might also try a smaller dot and less illumination.

You should investigate www.customsightpicture.com.  He offers a kit with something like 32 lenses which you can use for 2 weeks in a variety of lighting conditions.  The kit includes a variety of tint options too so you can find out what works best for you.

Dr. Alan Toler is rifle, pistol and revolver Distinguished.  He's "President's 100" and Master class Outdoor Bullseye.  He was at a local match in August and shot north of 2600.  He knows what shooters need.

I had the "red-blob" problem as well as a total inability to get crisp focus on the front sight with irons. Initially, I went to a local optometrist with a red-dot in hand.  From that, I had custom Oakley lenses made for frames I already own.  The dot was not PERFECT but pretty close.  I'm in my mid 60's so my vision is changing.  A year later, I got the kit from Dr. Toler.  I quickly narrowed the lens choice down to two.  I could then try indoor, outdoor, bright sunlight, overcast, hazy conditions to make the final choice. Since my original prescription found a small amount of astigmatism, I went back to the local optometrist for a "check-up".  I sent that prescription and together with my lens preference from his kit, he made me a lens.  I'd given up on shooting iron-sights.  Now I'm starting to enjoy it.

One more thought... the price of my prescription Oakley lens was $30 less than a "Champion Olympic" shooting glasses system. Now, when my eyes change enough to need a new lens, I can get one for 1/3 the cost of the Oakleys.
Glen

PS I'm a customer of Dr. Toler and derive no benefit from recommending him.  Shooting is more fun when you can see the sights I'm hoping I can help someone else have more fun. 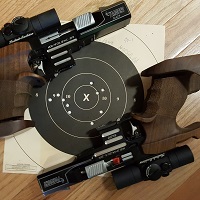 Dr. Toler is my Optometrist as well. But I think, as you note, he will need a local eye doc for the proper distance scrip even with the Custom Sight Picture Kit. That or make an appointment with Dr. Toler in Richmond VA.

It can be tough when you have on-again off again mild astigmatism. I have dealt with that situation for several years. With the dot, I do as I said and center the egg shape on the bull. With irons its more difficult, but not impossible. The hardest thing to overcome with the astigmatism is acting up is 600 yard shooting for service rifle.

Thanks CaryKiteBoarder, I'll give Dr. Toler a call today.  He had also been recommended by David Salyer, thankfully a patient mentor of mine.  But, I have been also looking for a shooter's OD closer to Middle Tennessee.  Nevertheless, 600 miles is better than going all the way to San Francisco, cost-wise.  I'm working on my 74th year and have been shooting Bullseye for 4 years after not shooting for 44+ years.  However, my perfect vision suddenly went south the last 8 months.  Jim, I don't do irons, and only use UltraDot Match IIs.  Since, when I started and didn't know how my eyes would do over time, I purchased three of them to go with my newly purchased guns.  They've performed great.  And, yup, I just about only use the lowest dot setting I can get. I know the astigmatism is correctable, but it's rapidly changeable nature seems to be a moving target.  It's irritating and I've shot hundreds of rounds trying to understand the egg issue as well.  Or, as well as someone with my skills can.  As noted, I've gone to several local ODs.  But, an off-the-shelf OD just will not cut it to my mind now that I've had several expensive experiences with them.  Ergo, my original question re: we only want an OD who is also a shooter.  I'll ask Dr. Toler about the kit.  Maybe he has a colleague around the Nashville area?  Thanks guys for your comments.  If you know of an OD shooter near to Nashville please pass the name along since several of us in our small League have the same need.

I have astigmatism and had the same problem made worse by need for trifocals. My eye doctor was helpful.  He put me in a single lens script for distance only with the astigmatism corrected.  It worked and I have a nice round dot. It doesn't sit still any better but at least it is round.

I had excellent results with the optometrist at my local Costco. I wanted to give contact lenses a try and explained to her what I wanted to accomplish. She gave me a prescription for my shooting eye that allows me to focus from about 12" to about 4'. There was an issue with my red dot flaring with both contacts and spectacles, but a Merit Optical Device elimintated that. Now, irons and the dot are in perfect focus. The lenses are Toric soft lenses which are comfortable and also correct for astigmatism. I got a separate prescription for distance with my off eye and couldn't be happier. It's like being 40 years younger.

If you have a chance to visit Dr. Normon Wong in San Francisco get his "shooter eye exam". My wife and I took a vacation out there a few years ago and I visited him. There is an additional charge over what insurance covers because he spends a lot of time with you, but, IMO, it's worth it.

I also sent Dr. Wong's Bullseye Shooters Guide for the Eyecare Professional to my eye doctor, which was very helpful.