Not sure if this should be in equipment but since it was grip oriented I thought maybe this was a good place for it.

I use the Herrett Nationals stocks on my S&W M41 and absolutely love them. In fact I use them on my precision muzzleloading pistols as well. Now when it comes to the 1911 I recently purchased the grip just feels like it's lacking something. I see so many pictures of 45 wad guns with out target styled grips and I'm wondering why not use them? Is it the fact that you can't use them for CMP that makes you decide not to use them at all and just stay familiar with one kind of 45 grip?

A shooting friend of mine sold me a used and carved up set of Morini grips for a 1911. I absolutely love the support given by these kinds of grips with the adjustable heal/rest.

What say you? Target or supported grips? Or stock grips?

I love them on my 22s but when it comes to the 1911 I've tried them all, every kind I could find, herrits, Nill,Rink,vartarbo, even had custom made from fung and Horton, after all the time and money I still  shoot best with flat stock type grips and most of the top shooters use flats too.

The size of my hands makes a regular slab side harder to handle. I use Master Grips from RoCo Technology. They fit my hand nicely and are ambidextrous so my son can shoot my gun when he wants (leftie). I have them on both my Range Officer and my Marvel conversion lower.

The flat slab sides just move too much in my hand. Maybe improper grip?

Tim,
I think you have it right on the Herrett Nationals. They seem to be the perfect choice for me. I have the same "feel" with all of my favorite pistols. They are a great example of the KISS principle. 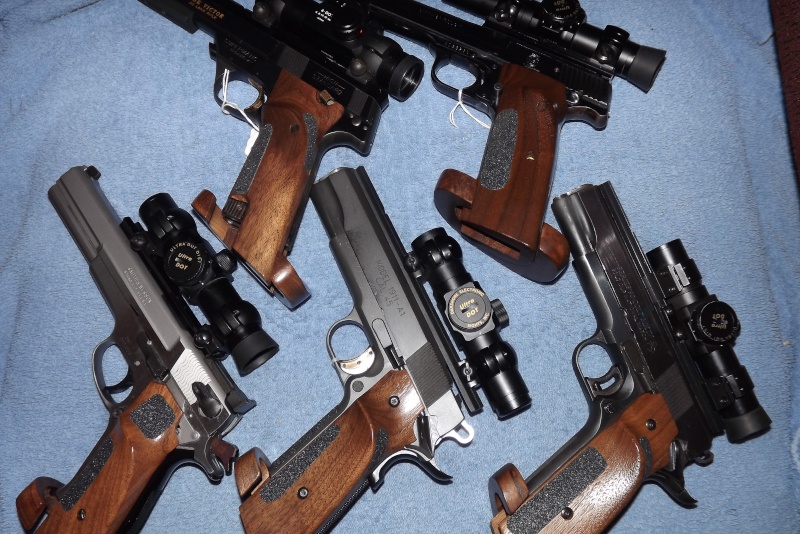 Old Master 65 - What do you use for grip tape and where did you find it?

At a skateboard shop. That tape really sticks but you can remove it.

Typically anatomical grips are wrong for the 1911 as the frame is large, hence the reason for the 1911A1.

The gun was designed to shoot single handed from horseback, in contrast to most European sidearms which were designed for disciplinary use (Luger, PPK) or self protection for Artillery men (Mauser, P38, Tokorov).

Most like the slabs, the narrower the better as it give you the best trigger control.

Something like 13 of 15 the last Camp Perry aggregate winners shoot slabs. I like slabs but have a shoulder injury so I like a palm rest for matches. I find anatomic grips (Nil, RINK even more so) aggravates my injury. Thus with no off the shelf solution I make my own grips.

I customize NM Harrets grips. I grind them down about to about 0.126 an inch thick. I also remove the palm swell thus they are as thin as thin slabs. If the crown of the screws are slightly above the grip when done that is perfect. If the grip is too thin and rattles don't worry, I use steal grips spacers which are a good idea for safety too.

At this point you can use grip tape but I take it a step further. I then stipple them the way I do it the surface is nearly the best grip surface possible. The project usually take me a day, At first I left them a little thick at the high point, shot them and adjust if needed. It is easier to take volume off these grips then to ad volume. Also DO NOT sand down the area by the slots where the screws are needed for the palm shelf.

Lastly I oil them with Scandinavian oil. The end result is a grip that looks like the love child of a Nil grip and a Harrets grip and you won't have to spend $260.

If the grip is too thin and rattles don't worry, I use steal spacers which are a good idea for safety too.


I have found the best slab grip is the grips that came with my Les Baer and Kensington Shark Skin grips both are cheap, under $40,

Tim:H11 wrote:Old Master 65 - What do you use for grip tape and where did you find it?

Its for smooth surfaces like the stock Harret's  grip.

On Amazon a guy sells Glock grip tape which is amazing stuff, looks like the vinyl on the old Cadillac roofs. Stuff is amazing and worth $6.99

I use it to cover up the holes on my frame and the only thing that effects this stuff aerosol gun cleaner.

Tim:H11 wrote:Old Master 65 - What do you use for grip tape and where did you find it?

Its for smooth surfaces like the stock Harret's  grip.

On Amazon a guy sells Glock grip tape which is amazing stuff, looks like the vinyl on the old Cadillac roofs. Stuff is amazing and worth $6.99

I use it to cover up the holes on my frame and the only thing that effects this stuff aerosol gun cleaner.

Different story for me with the .45
I have tried a few different anatomical's and have sold them all and went to a VZ Simonik Gunner grips.
They will leave an impression in your hand and the pistol does not move around in my grip unlike the anatomical's.