Looking to purchase one of these two pistols and wondering what the consensus is on which one is better?  Specifically looking for longevity, ease of cleaning/maintenance and reliability with commonly available ammunition.  I realize this may be a Ford v. Chevy debate but I'm looking for opinions based on hands on experience.  Any and all insights are greatly appreciated.

I own both.  No real comparison.  The Pardini is vastly better.  I liked the trigger in my AW-93 but the Pardini has a better design and has many more ways to customize the feel and how it shoots.  There are six weights on springs in the Pardini.  The AW-93 has a single weight...you can change but the Pardini has more flexibility.  The Pardini can swap barrels with  .32 ACP.
With the AW-93, if you are mounting a red dot sight there is a single 3rd party rail option that is excellent.  The other options 100% junk.
Scope rails built in to the Pardini...but you have to use their rings.

The AW-93 does not need a dryfire plug, but the Pardini does.  That is the only other advantage the AW-93 has.

While the Pardini and the AW-93 are both easy to clean I would never base my choice on that.  I shoot about 10,000 rounds a year and much more dry fire.

I bought the AW-93 first because everyone around here had. Hammerli or a Pardini.  I wanted to be different.  I found out why so many shooters use Pardini.

I have the Pardini and you could spend uhhh.. years tweaking the trigger to the way you like it.  Also have the Horton 1911 grip which is real nice.

I own the AW93. The trigger is tricky to adjust, but once you do, it is fantastic and it has held for years. Cleaning is simple and the Breznovich mount for a red dot is excellent. Mine shoots any ammo and has never failed. I've never shot a Pardini, but I hear good things about it. Would be best to try each if possible, but both will out shoot you so best to go with whichever feels the best.

I own a Pardini SP Bullseye and have shot a AW93. I like the recoil on the Pardini better and I prefer the standard raked grip on the Pardini over the AW93. For me it is about what gun fits you the best.

The Pardini fits me by far the best of all I have picked up.

Another option most don't think of is the Walther GSP Expert. They are reliable and accurate know of two people that have the straight GSP. The Expert is the newest model.

My sole issue with the Pardini is the Mushy trigger. I basically have to remove my finger from the trigger to get it to reset. I have yet to figure out a way to avoid that.

I have adjusted the sear engagement, the freeplay and the stage two weight. That helped alot. But the reset still almost requires one to take ones finger from the trigger and restart everything.

Not to hijack, but does anyone have any thoughts on this.

My AW93 is a great shooter, mine likes euro ammo and aguila it does not like federal or cci but with the right ammo it never fails and will shoot better than any shooter can hold. I never shot a pardini but held one and the severe rake of the grip is a must change for most every bullseye shooter I see they do now offer a bullseye model not sure if grip is different or not. Next thing maybe  to consider multi  National championship winner B.Zins can shoot anything he wants he shoots a AW93

Mine had that initially but I got rid of it. Looking at the trigger diagram in the manual try playing with adjustment on the trigger stop, first stage travel, and second stage travel depending on if you have it set for single stage or two stage.

I adjusted mine so it is a real crisp single stage. It is really nice and I don't have any issues with resetting the trigger or feel the mushiness your having.

When I adjust mine I pull the grip off, install the dry fire device, and adjust the screws until it feel right a couple times. Then install the grip and try a couple dry fires and see how you like it. Repeat until your happy. NOTE: sometimes 1/8 of a turn or less can make the biggest difference.

Just my personal experience with one, I probably have close to 10K rounds through mine with out issues and I usually give the HMs a good run in 22.

Thanks, I have not messed much with the travel execept to create some freeplay before entering stage 1 (when I bought it the trigger was into the first stage as soon as you touched it and it was impossible to reset without taking your finger off the trigger). I will try some more.

I really like the gun and it is great in slowfire, but it costs me a couple of points in sustained fire in almost every stage. But, it is the only pistol that I have shoot a 100-10x with in sustained fire, weird.

DavidR wrote:My AW93 is a great shooter, mine likes euro ammo and aguila it does not like federal or cci but with the right ammo it never fails and will shoot better than any shooter can hold. I never shot a pardini but held one and the severe rake of the grip is a must change for most every bullseye shooter I see they do now offer a bullseye model not sure if grip is different or not. Next thing maybe  to consider multi  National championship winner B.Zins can shoot anything he wants he shoots a AW93

The pardini. Bullseye supposedly has a heavier bolt, and the grip has an upsewpt palm rest. Unless you're a lefty you don't get one then

I shot a number of pistols including the FWB before I purchased my pardini.  The FWB is a very good pistol and I am sure I would be just as satisfied with the FWB.  Why I selected the pardini was that I personally preferred the feel of the pardini.  I cannot put a scientific explanation for it, it is the right pistol for me. 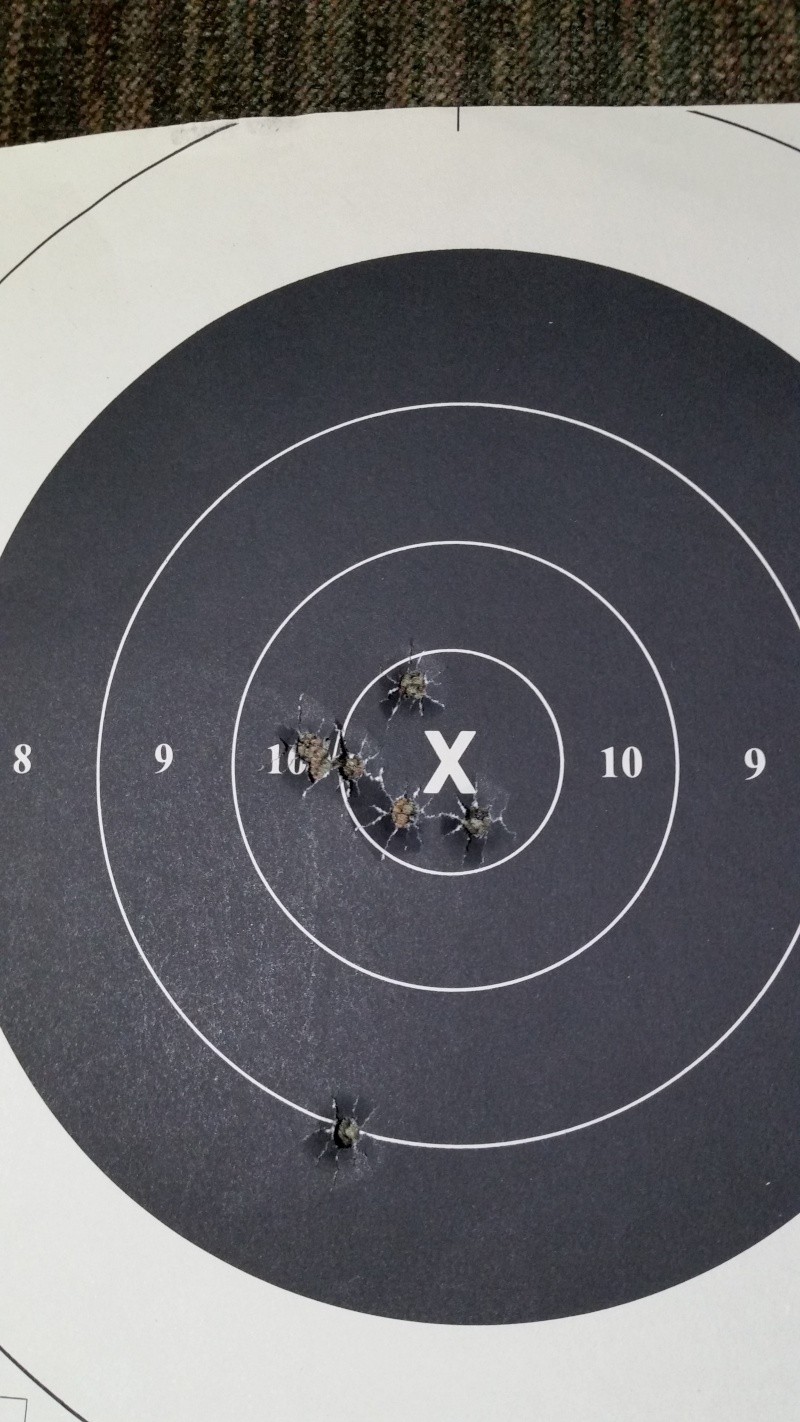 " />
This is why I like my Pardini HP in 32acp. Today I was getting ready for my first 50yd match of the season and was not sure how many clicks to up. I shot 1 round and then gave it 5 clicks and shot 5 more. Ready to go. I'll also give it 1 to the right now that I see the group.

Talking to my son Adam, Benning hosts a number of International Pistol Matches. Of the number of Pistols used Pardini .22 is 95% of the line. The other 5% vary. Talking to Sanderson at Perry last year because I knew him to be a Morini user (He showed me his MatchGun at Benning quite a few years ago) wanting to get information on the one I just got. Sanderson said the MatchGun is a good gun, he still has his (not for sale) but is now using a Pardini. Last year Adam made the Mayleigh Cup team selection and made the team. Naturally I was there to watch the shooting and during the shooting since Adam is on the line I was able to observe all the shooters. Everyone was using the Hammerli 208 except Zins.
If it were me I would get the Pardini, as a mater of fact I have instructed Adam get me a price for the Pardini 22, I intend to get one. The Match gun trigger is outstanding, I shot well with it. Scope I had mounted wasn't the best and the mount was not great either as I didn't want to drill the top for a scope mount but instead used the 2 existing threaded holes that were not in the ideal place nor do I know what they were for. I have the scope (9000SC) and everything necessary to make the top strap. But I can say that there is no comparison to the trigger in the Morini to the one in the AW, I am very disappointed in AW and in talking to other AW owners they are too! Putting work into the AW trigger I have it functioning near 98% of where I want it. I still have problems with the slide locking back after the last shot, often if it does lock back it will release when putting in the next magazine.