Gentlemen,
I have a ball gun that is showing its age and I am sending it off to Doug Jones to have rails fitted. He mentioned that he also does barrel refits, have any of you had a barrel refitted by Doug? Does he do a bullseye-quality fit? It would be a really convenient one-stop shop but I want to get feedback from someone who has had actual barrel fitting work done by him (not rails).
Thanks,
Andrew

I had him do my colt 1911 it was a screw up from the get go, he redid it twice and it was never right. The problem as I could tell was he over cut the slide on one side and ended up using two different sized rails to try and correct it. After the third attempt to get a usable fit I gave up. This was last year, I have seen other recent jobs not up to his older jobs. precede at your own risk.
Here is another thread about Accurail awhile back you might want to read

When having accurails done on an existing pistol with barrel already fit the nottom barrel lugs can end up too long or to short after fitting rails. I assume in most cases too long because slide will be lowered onto frame. As a result bottom barrel lugs and link will need refit.
Jon

I have a friend who works for Lincoln Electric, and they have guys in the company who can weld a chewing gum wrapper.  But out here in the real world it is hard to find a guy good enough with TIG to even do a decent job of welding up barrel lugs.

Thanks for all the information, but I was asking specifically if anyone had gotten barrel fitting work from Doug.

SmokinNJokin wrote:Thanks for all the information, but I was asking specifically if anyone had gotten barrel fitting work from Doug.

I'm sorry, I saw the name and seen a little red and missed the last part, however based on my experience, I wouldn't let him work on my bb gun. You want a barrel refit, contact Jon Eulette. or KC Crawford here on the forum, nothing but good feedback on these guys. And they are both bullseye gun building experts.

In Dayton is a weld shop that specializes in mold repair. They use micro tig and laser to weld molds for plastic injection mold companies, a shop with this type of experience and equipment should be able to do any type of gun repair.

You could do worse then Doug Jones. You could send it to me to weld up. First I could hit it with about 300 amps with the stick welder then if that didn't work I could use the plasma cutter or chop saw and start over. After the 3rd or 4th try with the MIG I would just weld it into one of the crab pots as an anode. I used to say "no job too small, some jobs too big". I guess there are some jobs that are too small also.

Hmm, doesn't look as neat as some of Jerry's pictures 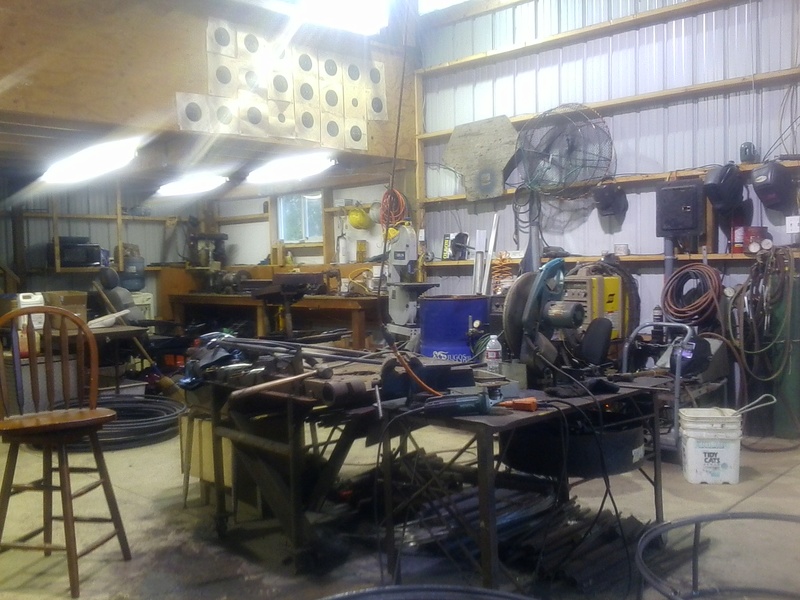 Dang it Len, I thought for a second someone had stolen my workshop.

Doug's shop is right on my way to work, he's done a few jobs for me. One was rails and barrel on a new wad gun built on an well used Series 70 I picked up cheap. I've just now started shooting it so it's pretty stiff but the shots are all right where I call them. Unfortunately, we moved indoors several weeks ago so I haven't shot it from 50 yards yet, so I'm hesitant to comment on its accuracy (but it's plenty good to clean an indoor slow). Doug is a USPSA shooter himself, and has done a lot of that type of 1911 builds, but also does a lot of bullseye work for local shooters. He has a very good reputation locally. This includes many barrel installs. I always prefer a dedicated bullseye gunsmith personally, but if I was having rails installed on another gun and wanted a new barrel as well, I'd let him Do the whole job.

454Gene wrote:In Dayton is a weld shop that specializes in mold repair. They use micro tig and laser to weld molds for plastic injection mold companies, a shop with this type of experience and equipment should be able to do any type of gun repair.

Do you have contact info on the shop?  And do they have an FFL?  Very important for me since I'm not there.

I have the shops card at work and will post the contact info tomorrow. There may be a website, Wicked Welding is their name on Webster street Dayton Ohio. Pretty sure they have a FFL.