I wonder why manufactures do not or can not produce center fire pistols with accuracy like they can with .22’s and air guns.  Consider that Olympians win medals with any number of out of the box pistols and ammo;  yet, to the best of my knowledge,  the number of CF pistols that will hold the 10 ring at 50 yards out of the box without good gunsmith work and hand loads is well pretty limited.

I don’t think it’s a marketing issue.  Really, how many competitors drop another thousand or more dollars into a thousand dollar pistol to get a tighter frame fit, better barrel and bushing fit, and great trigger?  I’m sure many of these folks would just as easily pay a manufacturer to do that work and have an out of the box tack driving pistol rather than wait months to years for a smith to re-build their pistol into a precision shooting machine.  Perhaps it’s a manufacturing problem, but if the Europeans can make a .22 or air pistol shoot five rounds into a small elongated hole they should be able to do the same with a .45.

As an American naturally I’d rather have that pistol read Remington, Colt, Smith etc on the side and eat Federal, Winchester, or UMC bullets  but if it has to read Pardini, FWB or Benelli and feed on Eley so be it.

They are out there. Les Baer, Rock River, S&W Performance Center, Kimber Super Match just to name some. You can buy an American made pistol that will shoot HM scores. They just cost more.

Thanks Len!  The other problem I’m faced with here in MA is approved availability.  Only some Smiths, of the brands you mentioned, are allowed here.

22LR is easy to make accurate. Other calibers are hard, and expensive. I am no expert but my best guesses as to why, at least for target 22 guns and ammo:

Hogue and Ed Masaki made fixed barrel center fire guns that reportedly had very good accuracy, but were never produced in volume. Fixed barrel 32's can be very accurate if the twist rate is optimized for the distance. 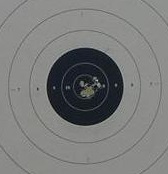 I've got great news for you. The 952-2 is on the list. I also have bad news for you. They are expensive. Advertised as the most accurate 9mm in the world. S&W's own words. Fun pistol to shoot. 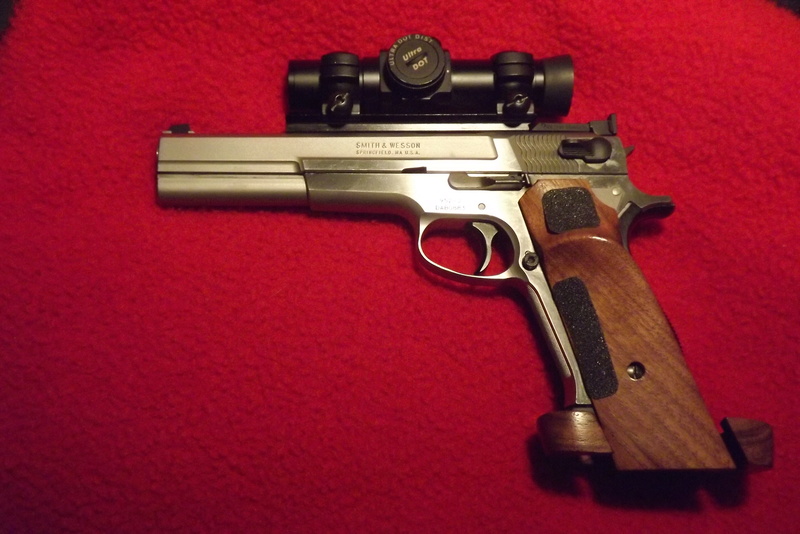 The double stack version of the 952 the PPC 9 is another great out of the box shooter.

LenV wrote:I've got great news for you. The 952-2 is on the list. I also have bad news for you. They are expensive. Advertised as the most accurate 9mm in the world. S&W's own words. Fun pistol to shoot.

As you pointed out, those are S&W's words.
Anyone ever put one head to head with a Pardini GT?

Jon Math wrote:I wonder why manufactures do not or can not produce center fire pistols with accuracy like they can with .22’s and air guns.

If you look at international competition I think your initial premise is flawed. The .22’s and air guns winning in the hands of the best are $2-3k pistols or $4-6k rifles (adjust as necessary for CAN$ vs. US$).

There are many fine (and very expensive) pistols that shoot very well and are good enough for very talented and advanced shooters.

Meanwhile, I know for a fact that my scores are entirely my fault and not the fault of my lowly SW22. Regardless of how my skills advance (or don't), I'm still determined that someday I'll get my hands on a Matchguns MG2.

Regardless of price many Olympians step to the line with out of the box Pardini, FWB, Anchutz, Morini, Benelli etc .22’s and air pistols and win medals.  Could Ruger or Smith etc.  make a $2000.00 pistol to compete at that level?  I’d stand in line to buy one if they ever did.

How many top Bulls eye shooters step to our line with a stock out of the box .45?  That’s my only point.

It's a lot like cars. Most are basic drive to work and home vehicles or trucks. That's where the bottom line is made. You want high performance? Pay some more!
Want Uber fast? Pay a lot more.
But, they are out there,.

Jon Math wrote:Could Ruger or Smith etc.  make a $2000.00 pistol to compete at that level?  I’d stand in line to buy one if they ever did.

Seems to me that there are a number of custom shops and "big names" that sell out-of-the-box $1k+ and $2k+ pistols in centerfire. But I can't comment further thanks to my noobish ignorance.

As an uninformed observer though, it seems that the obsession with customising the 1911 platform seems to be like many car fetishist sub-cultures. You might very well be able to buy a different model, make, or year that can be modified for similar or less cost. Might even out-class a moderately or unmodified of Make X Model Y.

But if it isn't Make X Model Y, it's probably not going to be helpful talking or asking about it with the regulars down at the local swap meet and drag race. You'll have to find other sources of support and advice until you can prove yourself with the locals.

(For example, there are now two or three people who initially were advising other pistols and were dismissive of what I was asking and saying about the SW22. Now, after my scores rapidly improved, there's suddenly a couple of them now suddenly know quite a bit about the pistol and offer me the latest things they've learned about it.)

I'll stop now. Before I bore the people who know more, or make a further analogy that just makes me look stupid.

Pardini sponsored shooters have won, the CF portion for a few years @ Perry.
Most guns are made to shot well at 15-20yards  you want a accurate precision pistol it will have to come from a semi custom shop, custom shop or a boutique manufacturer.
Phill won 2016 national championship w/ his RRA.

Jon Math wrote:Regardless of price many Olympians step to the line with out of the box Pardini, FWB, Anchutz, Morini, Benelli etc .22’s and air pistols and win medals.  Could Ruger or Smith etc.  make a $2000.00 pistol to compete at that level?  I’d stand in line to buy one if they ever did.

How many top Bulls eye shooters step to our line with a stock out of the box .45?  That’s my only point.

I personally know of at least 15 bullseye shooters where their 1st 45 was an new or slightly used out of the box Les Baer wad gun.  Under $2K from CC when I bought mine.  Many take them to Master level, so they are out there.

Once you reach Expert or Master you are customizing/fitting the gun to your preferences.  Even if S&W or ??? decided to produce a 3/4" @ 50yard gun I'd bet 100% of the Master/HM shooter would at least have some trigger work done on it.

Guns shot by Olympians are adjusted to their preference too, and there is quite a bit of testing done before the pistol is accepted by the top tier competitors.

Are the big Mfg. interested?  I say they are getting there, hence the Springfield RO.  I think Springfield did enough research to know that most Bullseye shooters would end up modding the gun so they targeted almost the perfect price point.  Springfield also answered the run and gun crowd with the XDM 5.25".  The 5.25 is a pretty accurate gun for a striker fired gun and with a couple of quick mods (trigger & barrel lockup) total investment under $1K and you have a gun capable getting that P100 badge, just as several competitors did this year.

How about a .32 ACP Pardini for an out of the box centerfire gun that's competitive. Need a 45? I think the Pardini GT45 can do it. Len has already listed the American-made 1911 options.