I have recently been diagnosed with Parkinson's. I am one of the unfortunate souls who was stationed at Camp LeJune during the bad water time frame ('53-'87). My question is that I want to return to Bullseye Pistol. BUT some things are a problem, do I have to go down range and score/replace targets myself, or can someone do it for me?

willnewton wrote:
As long as you can shoot safely, any group worth shooting with will do what they can to get you on the line.

I hope you keep at it.  You are stronger inside than many who can hold the pistol just fine!  Kudos to you sir.

I know I have not been keeping you informed but it has been a busy time for me.
I am on the verge of giving up on the pistol. I have agonized over the decision for the entire Covid time.
It seems to me that there is some sort of disconnect when I fire shot, I will see a perfect sight picture.  Then nothing, no shot anywhere that makes any sense to me. I know how I "used to shoot" and this stuff is not it.
I have fired over 100 rounds a total of 2 were in the black. I must find a solution to this problem.
But I do not know what to do.
Thanks, Andy

Andy, sorry to hear. Have you had someone else shoot the pistol to rule out a hardware problem? Optics issues will certainly do this.

If that checks out, maybe try a wrist or arm support, to get more insight on things. I used a physical therapy pulley on a loop under my forearm to retrain after shoulder surgery last winter. It's amazing how much the fine-motor skills needed work to come back. I'm still struggling with grip and wrist control in sustained fire. Are you able to switch hands?

Joel Weber, I was recently aware of an aid that I had no idea about, the Mantis X shooting system?

Are you able to switch hands?


Am in the journey of going southpaw myself.  Shot my first match left handed a few weeks back, to say it's humbling is the understatement of the year. Have never shot that bad even as a rank beginner.


On the positive side, my wobble is within the black. It's trying to control the trigger with my left index finger. Only had 2 targets throughout the 2700 without misses at 50'.  I'm working on dryfiring, a lot, left handed &amp; it's helping. But still excruciating slow going.


Had 17 targets without a miss instead of 2. 22 portion went the best, so I made a decision to shoot the 22's (MKII & HS Citation) for the TF & RF portions of the CF & 45 stages, I knew I was going to be last anyhow so why not experiment. Wanted to see if the HS or the MKII shot better, L-Handed, in sustained fire. I normally use my Nelson's & wanted to see if the old dogs could still hunt. Didn't break 2000, but it still beats working. Keeping on with the dry firing.

BUT, you keep working at it!

I was at a match at A club in NC and a gentleman had been hurt by an IED in Afghanistan. He couldn’t walk up to the 25 and 50 without trouble. He had offers from almost every shooter to score Amd change targets for him.

You already know this but BE shooters are a very tightly knit group with amazing people. I would say there is a 99.9999% chance you will have no problem finding help.

Best of luck and keep your eye on the target 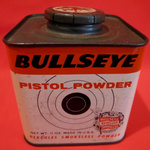 Well here is a preseason update for everyone; it has been a very rough 2 years for me personally, I lost the most beautiful person in the world on 8/15/2021 to lung cancer. I am working very hard to get my shooting game back to where I would like it to be. It appear that I may have been working too hard. Now my left arm is really sore. When I wake up I can't even pick up my phone. Damg it! I have been dry firing every chance I get and now it seems that I may have overdone it a bit. I guess I will just need to SLOW DOWN and wait! This is very hard on me, but I have discovered the value of dry firing all over again. MR. Chapman, I am still at it and thank you very much for the encouragement. Andy

Keep going man!  And sorry for your loss.

So sorry to hear about you wife Andy.

Similar topics
» Is shooting a Pardini like shooting a Steyr air pistol?
» Shooting for Rhythm vs Shooting When the Shot is There
» Shooting to do your best or shooting to hit a certain score.
» When shooting 45 is better than 22?
» For those shooting the ..... SW 52-1/2