I'm getting to the point where I'll need cataract surgery in the not too distant future. I'm struggling to figure out if the multi-focus lenses would be best for a shooter, like myself, or if I should go with a medium focus, etc. I realize that insurance probably won't cover some premium lenses like multi-focus, so I'm soliciting opinions on whether any of you that have had multi-focus lenses think it is worth the, out-of-the pocket, extra thousands of dollars per eye.

Completed cataract surgery on both eyes last month. Opted for standard (not laser) procedure, to give me distance vision. Love it! An analogy would be going from a screen resolution of 640X480 to 4K!
Sure, closer than 12 inches, I need the readers, but shooting bullseye is a joy again!

jwax wrote:..., but shooting bullseye is a joy again!

Then why aren't you shooting in Long Lake with us?  We do still have plenty of room on Friday AND Saturday. No Sunday relay...

jwax wrote:..., but shooting bullseye is a joy again!

Then why aren't you shooting in Long Lake with us?  We do still have plenty of room on Friday AND Saturday. No Sunday relay...

Come on up Saturday John!

Sorry, but just got back from Buffalo, where my daughter made me a grandpa!
Next few days are a tad busy, but I'll be watching out for the match results!
Shoot straight all!
John

glad to hear of your eye success! you have the same experience I did!

james r chapman wrote:glad to hear of your eye success! you have the same experience I did!

Jim, do you mean you're a grandpa, or your cataract surgery was great?

Congratulations all around for everything, John!

Duh, sometimes I don't think about what should be obvious.  Something just hit me as if someone hit me with a board.

The shooting glasses that I had made in India for my post-cataract-surgery eyes were not right - they only worked with a front sight several inches beyond the front sight on a 1911, (close to correct for my Model 41 with 7" barrel).  I was going to have new lenses put in the frame for the correct distance.  So far, so good.

Then, thanks to you guys, I decided a few days ago that I'm going to learn to shoot one handed.  That's a struggle, because my hands start to wiggle too much, but I guess with enough dry-fire that will go away.  But my front sight...  using my progressive lenses, it was difficult to see the front sight sharply.  Then I realized the obvious - shooting one handed, the gun is quite a bit further away from the eye!  Duhhh...   OK, I'm slow.  With that thought bouncing around in my head, I got out the pair of shooting glasses that I was going to modify, and found they are correct for the 1911 shooting one handed.


Back to this thread.  Anyone who has cataract surgery, and who shoots both one handed and two handed, will need two pair of shooting glasses, since the eye can't accommodate the different distances from eye to front sight.  (Just curious - does everyone here shoot one handed?)

Mike, I shoot PPC (2 handed) and BE (one handed), I would agree with your statement.
What happens is a focus from front sight to rear sight generally. It's something that can be accomodated.
I believe it was Zins who said either the front or the rear needed to be in focus.

One of the negative things about cataract surgery is the the eye then has a fixed focus, no ability to adjust focus for different distances.  I therefore decided I needed three pair of glasses, one for the distance to a 1911 front sight, held with two hands, one fo 1911 held out in front for one-hand shooting, and a third suitable for a red dot.  All would have polycarbonate lenses, and my left (non-shooting) eye would have a prescription for viewing things on the shooting bench.  I'm now in India, had my refraction done a week ago, and was fitted for the new glasses today.

I told them I wanted a sturdy frame, large lenses, nothing fancy, and with an anti-reflection coating and an anti-scratch coating.

Two photos, the device I used to get the refraction to the distance of a 1911 front sight, and my glasses being prepared for the new lenses.  I'll get them all back this coming Friday. 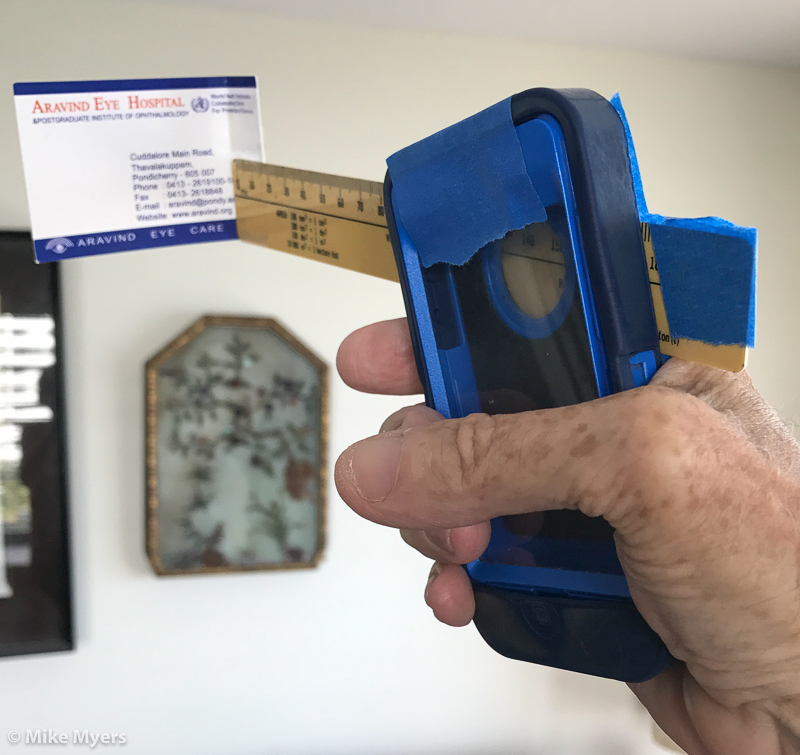 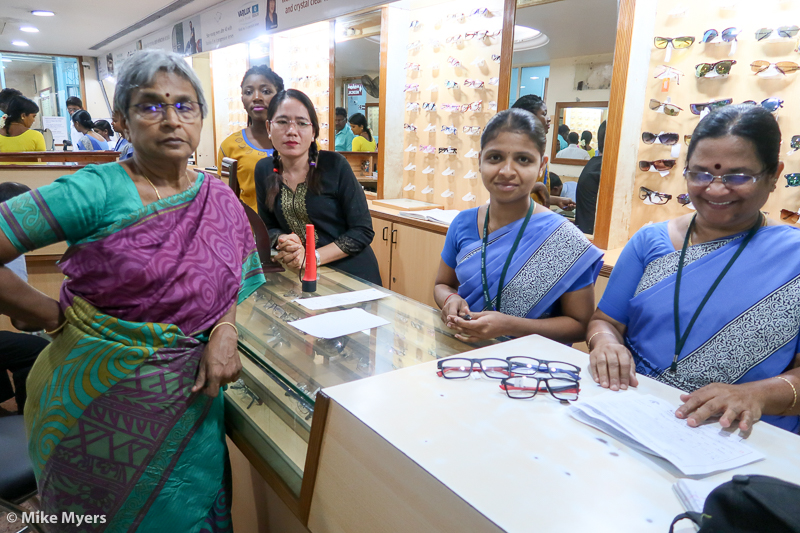 My initial instinct was to go accomodative...but I'd like opinions. I shoot serious precision pistol disciplines...in particular, International Muzzle-Loading. No red dot.  Meaning I need to be able to correct to razor-sharp focus on the front sight.


Wearing glasses to shoot does not bother me one bit, they're required for safety.

Any inputs would be most welcome. Thanks.

IMHO, I was happy I chose the monovision, infinity.
always a clear picture, I shoot a lot of Trap, needed a sharp focus.
I have special ground glasses for PPC and Precision Pistol to accomodate the distance to front sight.
I wear reading glasses where necessary.
life is good.

First, if you can afford it, get the "topic" IOL, as you might as well correct the astigmatism once and for all.

For the second, for a different reason though, I completely agree with what Jim Chapman wrote.  Get a single prescription IOL for whatever distance you select.

The accommodating lenses sometimes work, and sometimes don't, so they need to be replaced in a second surgery.  The multi-focal lenses sort of work, as part of your brain sees what's far, and another part sees what's close, and your brain figures out what to do, and which one to pay attention to, but nothing would be as sharp as if the entire eye were to focus at a single distance.

I asked the people who make the IOL, and also my doctor, which IOL would give me absolutely the BEST (clearest, sharpest) vision at a specific distance.  There was no question - monofocal IOL (also less expensive than the "premium" lenses).

Then you will need glasses to see at different distances (which is why I got two pair of glasses to see the front sight single-handed and two-handed).  If your doctor is comfortable with you bringing a gun when you get refraction, that is ideal.  Or, make something like what's in my photo.  I tried using a tape measure and a piece of paper last time I did this, and the results weren't that good.


(One other thing - the result after cataract surgery isn't "exact".  The IOL may rest in a slightly different position than expected, and the IOL itself has a tolerance of +/- some value.  If they give you an IOL for perfect vision of the mountains, it might end up slightly too strong or too weak, so maybe a tree 50 feet away might be sharpest, or nothing at any distance will be sharpest.  I asked them for an IOL that would give me the best vision in the range of two meters to infinity - it was slightly too powerful.  To me, that's the best, as something, somewhere, at some distance, will be perfectly sharp, and your glasses will fine tune this so different distances can be sharp.  If the IOL isn't powerful enough, then the glasses will still work as intended, but when you're not wearing them, nothing in front of you will be perfectly sharp.  I can give you the proper wording that an ophthalmologist would understand, but if you tell him what I just wrote, he'll already know what to do.)

I spoke to Dr. Alan Toler, who makes up my shooting glasses.  He thought a toric would be best, but had few patients with an accomodative lens.

I'm going to talk to the doc doing the surgery next week, may go to a toric over the accomodative.  I wind up wearing glasses either way, I just want best performance.

The "accommodating" lenses that move inside your eye to focus work for some people, and not for others.  Various doctors, including one from the University of Liverpool (if I remember correctly) told they are a terrible idea - she was also opposed to anyone trying to re-shape the cornea.

Toric is an additional correction that is done with the IOL inside your eye, to correct for astigmatism, and once that is done, your eyes are "fixed" so your glasses no longer need to try to correct that astigmatism.  Toric is something everyone I spoke to agreed with.

From this web site:
http://www.bettervisionguide.com/multifocal-iols/
"Keep in mind that a multifocal solution does require something of a compromise with regard to clarity of distance vision. If you require the best possible distance vision for work or are otherwise unwilling to accept this sort of compromise, a more traditional monofocal IOL is likely a better fit."


I didn't ask about shooting, but instead I did ask my doctors which would be best IOL for me as a photographer, if I wanted the sharpest, clearest vision of something I was photographing.  The only answer was "monofocal".


Again, with accommodating lenses, as a Bullseye shooter, ask your eye doctor how well that will allow you to see the front sight on a gun.  Since you need to wear shooting glasses anyway, my way of seeing this (pun intended) is/was to specify monofocal IOL's, and to get shooting glasses with a prescription to make the front sight perfectly clear.


If your doctor is good about things like this, and can/will take the time to listen to your explanation of what you expect, he can give you the advantages vs. disadvantages of each.  ...and if your main goal is to go around without wearing glasses, and are willing to make the compromise, there are more convenient solutions than monodical       Do all this BEFORE you get your surgery done.  If you get it done in a way that bothers you later (halo's, lack of clarity, etc.) it's much harder and more expensive to change.

Wearing glasses doesn't bother me, I've done it all my life.  But my left eye is nearly useless, the right eye is starting to suffer from noticeable glare.  Meaning the left eye needs surgery soon.  I'm hoping to keep the right eye shooting for another season...I've got the World Muzzle-Loading Championships coming up in August, need to be shooting well for that.

If all you have is "cataracts", waiting is not a problem.  You could do it when you're 95, and you would get back  your vision as soon as the cloudy lens was replaced with a clear lens.  But there are many other things that could be causing the problem, such as glaucoma, and for them, if you delay, you can lose your vision permanently, with no way to get it back.  An eye specialist can examine your eyes, determine what you need, and when, and explain what is going on.

They always do the "worst" eye first, in your case that would apparently be your left eye.  If it's "nearly useless" now, why wait?