I got to thinking on the "early skid shot".
What happens when a skidder destroys enough paper to make other shots impossible to score?  Or if the skid mark obliterates another shot hole?

Understood about three shot groupings.  But what if the skidder wiped out just one shot hole, and there are no evident 3 shot groupings?  This is sort of like the impossible double.
My guess is if it not visible, you don't get it even if you know you fired it, maybe even scoped it between strings.

Jack H wrote:Understood about three shot groupings.  But what if the skidder wiped out just one shot hole, and there are no evident 3 shot groupings?  This is sort of like the impossible double.
My guess is if it not visible, you don't get it even if you know you fired it, maybe even scoped it between strings.

Correct.  If you can't see it, it can't be scored.  Now, the chances of a skidder doing that are pretty remote, but possible with the .45, not so much with a .22.

We had a slider in RF that went 8 ring to 8 ring. We decided to just score all the rings. He got a really good ag that night!

Seen one cut the target in half, indoors 50 feet.

The scorer can only score what they see, applying 14.9 as needed.
The shooter can always challenge.
Sometimes you lose the perfect double anyway.

However, in this situation, I would probably challenge using 9.12 Interruption of Fire, although the situation does not specifically address the conditions, ie., the shooter would have been able to see the target.   However, this rule does appear to give some leeway to applying it because condition (4) specifies "scoring".

9.12 Interruption of Fire - (a) In timed or rapid fire when the firing of a string is interrupted by some occurrence which renders it impossible for one or more competitors to complete the string under the conditions of the match, the Chief Range Officer will proceed as follows. Without being permitted to examine their targets, competitors in the relay who have been so prevented from completing their strings will be asked if they wish to refire or to accept their score as fired. Targets will then be scored in the usual manner for all competitors except those who have elected to refire. Without being scored, the targets of such competitors who have elected to refire will be pasted or new targets substituted and a complete string will be fired and scored. Reasons authorizing this procedure are:
(1) Failure to allow full time.
(2) Failure of targets to operate properly or uniformly.
(3) Failure of target to remain in position on frame or carrier.
(4) Damage to target rendering impossible proper aiming or scoring impossible.
(5) The appearance of some object in line of fire constituting a hazard......

As always, comments and opinions are welcome.

243winxb wrote:Seen one cut the target in half, indoors 50 feet.

I did that once indoors at Canton. I forget exactly how the target was scored but it wasn't beneficial.... I was actually pretty pleased with the feat even if I only scored 40 something:) 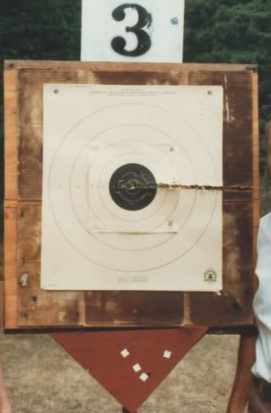 It entered the X

then X the shooter gets.

That's a messy one! Neat looking.

Even if it entered the right edge? Weird way to turn. Then the score would be a 5. One scoring ring up from the miss is a 5 and you go up a max of one scoring ring.

There should be a requirement for those posting in rules threads, to provide the rule that covers their subject.  That would include the OP as well as any responders.  The books are on line.  Cuts and Pastes are our friends.  I'm not really trying to be a smart ass, but memories, rules and previous experiences are often different from when we visit them today.

Ed H makes some good points in his post, and I would add that, as competitors we should:

2) Have a rule book handy

#2 was emphasized to me by by a highly experienced shooter when I was a novice.  I lost a lot of points by not doing so, and gained points when I was later better prepared and more assertive.  Even NRA referees can have a memory lapse.  At most matches scores and issues are resolved quickly. If you can't immediately and effectively make your case, by producing the rule, it will cost you. And for those starting out, it will make matches less stressful, and scoring go more quickly.

Chris is correct if the shot started in or on the X ring.

Jack H is correct if the shot started off the target card.

That's why its important to know which way the targets turn and to inspect the target carefully to determine the actual entry point and direction.

Ed is correct, but cut and paste from the NRA Rules (in PDF format) creates some formatting challenges, at least for me.  I do try to take the time to clean up the formatting issues when posting.

Sharkdoctor is correct and the best advise so far.

If you go to coaching class, training class, or referee training (for practically any sport) the first rule is to not answer a rules question without reading the rule book, even if you "know" the answer.


See if you can get a copy of the 2017 rule changes as well....those still haven't been put online

Hi ,
No, we do not sell the Rule Book anymore, we only have for PDF.

I think a PDF on your phone is pretty useful.

Similar topics
» Question: What are the steps in the complete shot firing cycle?
» Best 5 shot group at 25 yards that I ever shot with a handgun.
» When to take the shot
» Low First Shot
» Shot an 87 today